Relationships between Gods and Mortals in The Odyssey

The Ancient Greeks were a race of very religious people who believed strongly in their gods and goddesses. Not only did they believe in the presence of their gods, they actually believed that the gods often intervened in their lives. Due to such a strong belief, the Greeks held their gods in the highest regard and had the utmost respect and reverence for them. Furthermore, they established certain types of relationships with their gods, usually not relationships in a physical sense, but relationships nonetheless.

Don’t waste time
Get a verified writer to help you with Relationships between Gods and Mortals in The Odyssey
Hire verified writer
$35.80 for a 2-page paper

Many examples of such relationships are evident through the relationships demonstrated between characters of Homer’s epic, The Odyssey.

One such relationship that the Greeks had with their gods were that they were forever trying to please them and in certain cases, their efforts were awarded. The Greeks all did their part to show respect for the gods through methods such as prayer and sacrifice, which are both evident in The Odyssey. However, in some cases, it seems that such respect was mutual, as demonstrated by some of the relationships portrayed by Homer.

One such relationship was between Odysseus and Athena. The latter develops an extensive bond with the mere mortal because she sees herself in him. Due to this, she helps Odysseus out on many occasions, like when she begs her father, Zeus, to allow her to aid Odysseus in his quest to find home. She pleads, even saying, “My own heart is broken for Odysseus” (1. 68), and is able to convince him. Only through Athena’s pleading does Zeus have the incentive to dispatch Hermes to free Odysseus from Calypso’s island, allowing him to eventually find home.

Another example of this type of relationship is between Athena and Telemachus, Odysseus’s son. Only through her guidance does Telemachus mature as the epic progresses, learning his responsibilities as a prince and becoming more assertive. He finally takes charge, taking the initiative to find his father and confronting the suitors. An example of Athena’s guidance is when visits Ithaca, giving him friendly advice under the disguise of being a stranger. She gives him a nudge in the right direction, at one point saying, “If I were you, I should take steps to make these men disperse” (1. 318-319). Yet another example of such positive divine intervention is through the relationship between Athena and Penelope.

The grey-eyed goddess respects Odysseus’ cunning wife and sometimes soothes her loneliness by helping her sleep. At the end of the epic, she even makes the night longer so that the lovers would have more time to get reacquainted. As Homer writes, “The rose Dawn might have found them weeping still had not grey-eyed Athena slowed the night” (23. 271-272). Athena’s goodwill helped mortals on numerous occasions in The Odyssey, demonstrating an example of the relationship between the Greeks and Gods where the mortals’ reverence was rewarded.

On the contrary, another type of relationship is where the gods are rather indifferent to the mortals, despite their praying and sacrificing. Examples of this are present in Homer’s epic as well. For example, as Zeus ponders the situation of Aigístos and Orestìs, he muses, exclaiming, “My word, how mortals take the gods to task! All their afflictions come from us, we heard. And what of their own failings” (1. 48-50)? This is a perfect example of how contrary to the belief of some mortals, the gods did not control every insignificant detail of their lives. The gods were at times uninterested in meddling in mortal affairs. Another example of this relationship is through that of Zeus and Odysseus.

Zeus admires Odysseus, asking Athena, “Could I forget that kingly man, Odysseus” (1. 87)? However, though Zeus knows exactly what has been going on with Odysseus and respects the wisdom of the mortal, he would not have taken the initiative to help him without Athena’s pleading, showing his practically indifferent attitude. However, he is better off with a god indifferent to him than with a god holding a grudge against him.

Another type of relationship is one in which the gods would punish mortals for certain things, using divine intervention to negatively influence their lives. One obvious example in The Odyssey is the relationship between Odysseus and Poseidon, the former’s antagonist. Poseidon passionately hates Odysseus because he blinded the god’s son, Polyphemus, in order to escape from the man-eating cyclop’s cave. The vexed god of the sea constantly tries to hamper Odysseus’s attempts at returning home in any way possible. Another example of such relationship is when Odysseus’ men are punished for disobeying the gods. They are advised not to slaughter Helios, the Sun god’s cattle by Tiresias, as he says “If you raid the beeves, I see destruction for ship and crew” (12. 166-167). However, the crew ignores the advice and kills some cattle for food.

This is a blasphemous act and they are punished for it when Zeus sends down lightening and thunder, and they all lose their lives. Only Odysseus survives, and he barely does so. Another example of such relationship is shown through the fear that the mortals had of displeasing the gods. For example, when a storm spurred by Aeolus’s own winds brings Odysseus and his men back to Aeolus, the ruler of the wind suddenly refuses to help them because he is sure that they are cursed by the gods. Aeolus himself is scared to help them for fear that he himself will get on the bad side of a god.

Relationships between Gods and Mortals in The Odyssey. (2016, Jun 25). Retrieved from http://studymoose.com/relationships-between-gods-and-mortals-in-the-odyssey-essay 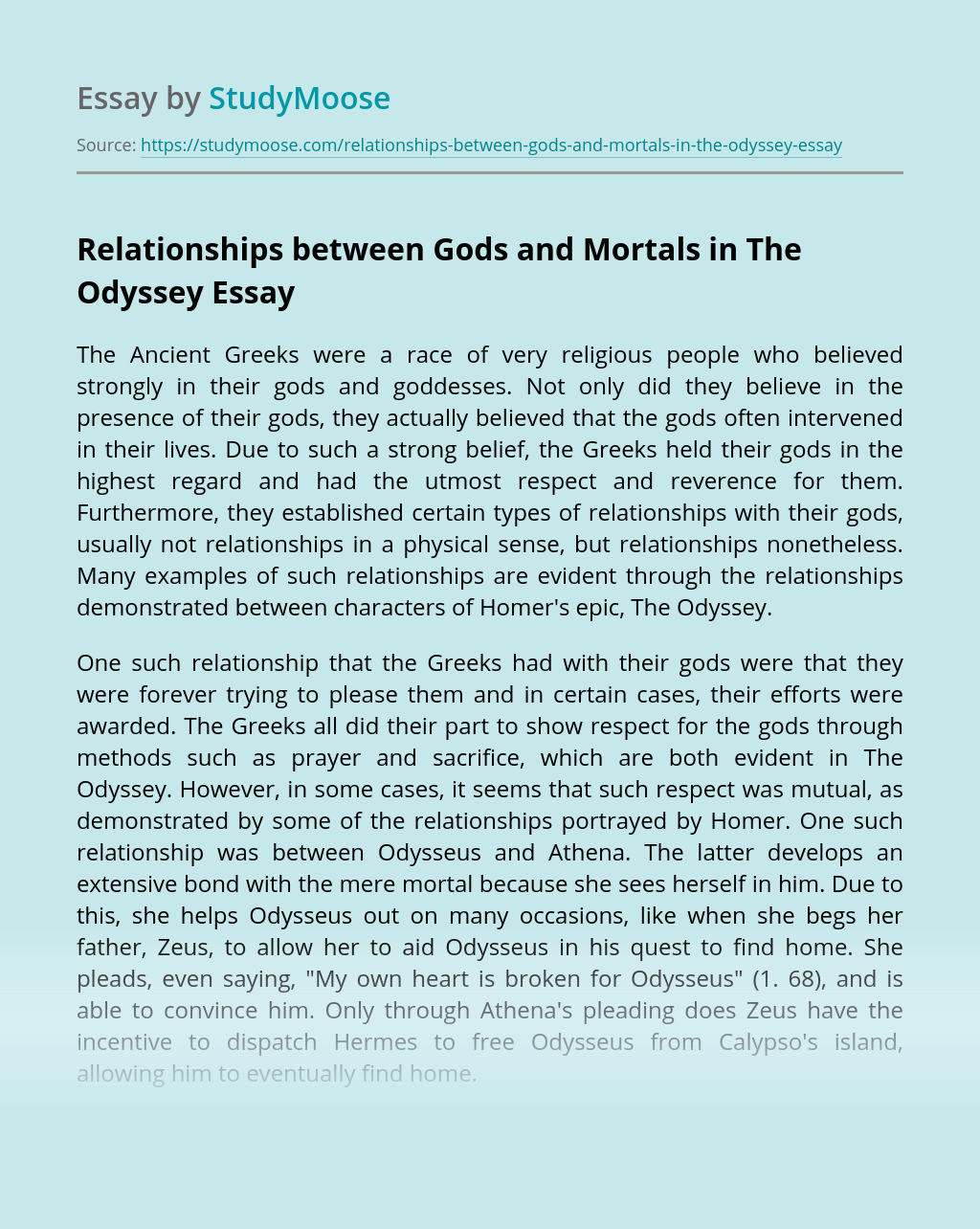 Don’t waste time
Get a verified writer to help you with Relationships between Gods and Mortals in The Odyssey
Hire verified writer
$35.80 for a 2-page paper
Stay Safe, Stay Original