Role of Greek gods in the Iliad

Greek gods are anthropomorphic gods who posses various human characteristics . Based on these characteristics, Homer depicts them as very competitive beings who are constantly trying to prove themselves superior to others. In Iliad, some gods sided Achaeans while others sided Trojans but they shared something common which is , they all interfered in the war which resulted in various unexpected consequences.

Therefore in Homer’s Iliad, Greek gods intervene in the war to help their favorite mortals, control the fate of soldiers and cause unexpected twists and turns in the plot.

During the Trojan war, different gods take different sides and they are depicted very generous to their favorite mortals.

For instance Paris declares Aphrodite as the most beautiful among other goddesses ; as a result he becomes Aphrodite’s favourite and receives aid during the war. In this way, it is very beneficial to a mortal if he has gods’ power on his side.

Accordingly, angering the priest further angers Apollo who causes immense destruction ; this reveals the extent to which gods can help their favorite mortals. In this way, gods take it as their duty to be responsible for the welfare of their favorite mortals and failing to do so is seen as inferiority; for example when Aphrodite saves Paris from Agamemnon, Zeus mocks Athena and Hera by saying that Athena saved her favorite mortal, Paris from death but Hera and Athena kept distance from Greeks ( book 4 line 10) .

Consequently, the Greek gods help their favorite mortals in every situation without worrying about the possible consequences; having this kind of support from a god is a substantial power a mortal can have. The fact that Gods helps mortals regularly introduces the role of gods in deciding the fate in Iliad. Homer depicts Gods as the ultimate deciders of the fate of mortals. As an example, book starts with the lines: “leaving so many dead men-carrion for dogs and birds; and the will of Zeus was done”(Book1, Lines 5-6). This reveals that the consequence of the war is the will of immortals which is fulfilled through the actions of mortals.

However, these actions are not solely based on the free will of the mortals. For example when Akhilleus is going to kill Agamemnon, Athena intervenes and stops him(Book 3). Therefore, the intervention of Athena affects the free will of Akhilleus which changes the fate of Agamemnon and of the war as a whole. Thus, It doesn’t matter what a mortal does or how much he tries, the final decision or action is performed by the gods, directly or indirectly. Throughout Iliad, the Gods disguise as mortals and intervene in the war to bring unexpected twists and turns in the plot.

For instance, in Book three when Paris and Menelaos are set to fight, the war is expected to end. However, unexpectedly, the divine intervention of Aphrodite saves Paris during the combat; the whole plot is twisted and a hope of an end to the war is lost . Similarly, in book four, Zeus decides that Menelaos should be declared as the winner but Athena and Hera want complete destruction of Troy; so Athena intervenes to revive the war by tempting a Trojan soldier to attack Menelaos: ” Have you the gall to send an arrow like a fork of lightning home against Menelaos?

Every Trojan heart would rise, and every man would praise you. ” ( Book4, Lines 110-113). Conversely, Athena’s motive is to just give a pretext to the Greeks to fight, therefore she saves Menelaos from any fatal injury: ” … Athena, hope of soldiers, helped you first of all, deflecting by an inch the missile’s flight” (Book 4, Lines 152-155). So, due to the intervention of Athena, efforts made to end the war peacefully fails completely. Thus, the gods intervene very frequently in the plot and bring unanticipated twists.

Therefore, in the Iliad, gods frequently interfere in the war to help their favored side. These gods are different from the Christian idea of a God because Greek gods help their favorite mortals regardless of if it is right or wrong to do so; whereas, the Christian idea goes with the fact that God always favours the right. So, the gods are very significant characters used by Homer to make the plot more interesting and at the same time reveal the powers and nature of gods.

Role of Greek gods in the Iliad. (2017, Aug 15). Retrieved from http://studymoose.com/role-of-greek-gods-in-the-iliad-essay 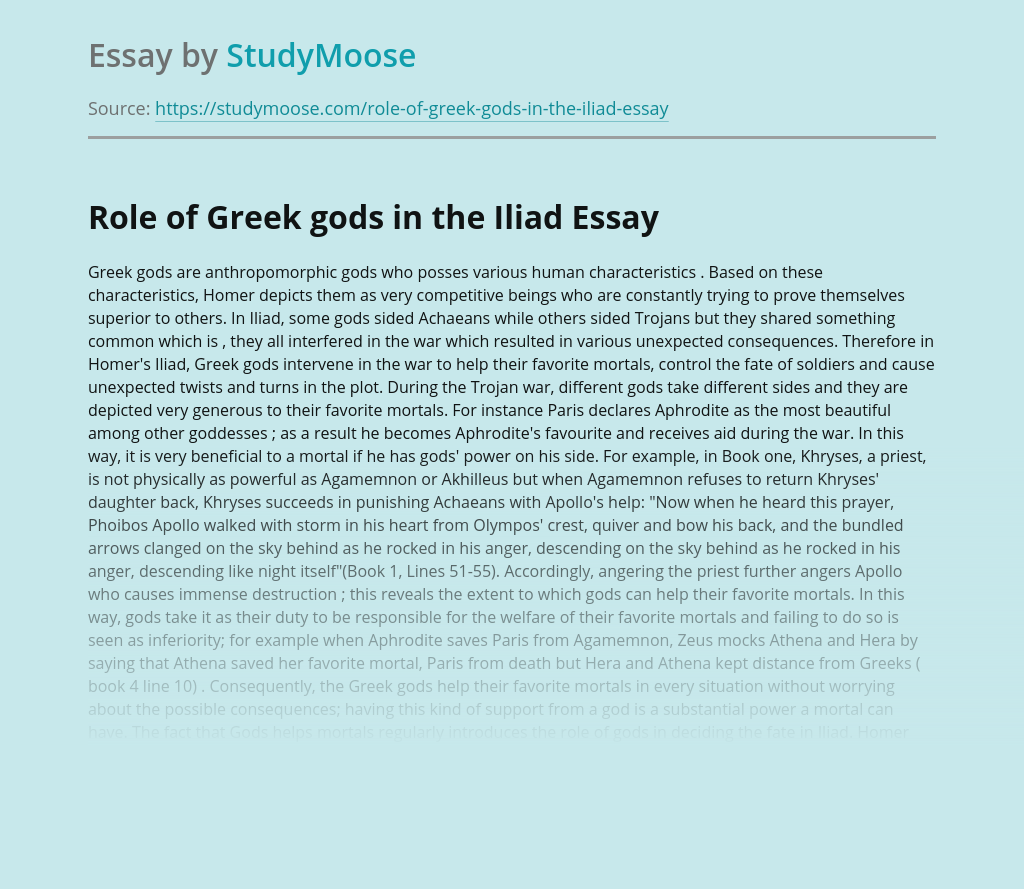 Don’t waste time
Get a verified writer to help you with Role of Greek gods in the Iliad
Hire verified writer
$35.80 for a 2-page paper
Stay Safe, Stay Original