The Role of Gods in Ramayana

Laid out the proofs wherein the god-characters in the story Ramayana acted as providers for the human beings, particularly blessing King Dasaratha with a gift from the gods.

III. Gods and their role in political intervention

This part discusses the role of the gods in the story as central characters that exercised political intervention in the realm of the human beings.

This part discusses the role of the gods as the guide of the human beings towards finding the right path towards righteousness and salvation.

This part of the paper is focused in the significance of having the central human characters as the incarnation of gods themselves, therefore improving the role of the gods in the story even more.

The important and significant major religions of the modern times are always with epic stories that narrate the adventures of lead heroes and heroines and how they are blessed by the gods, and sometimes how gods in some occassion directly interfere through incarnation or by revealing themselves to a person or to a group of individuals.

These stories are always with moral lessons. The role of the gods in the story is always essential because the stability of the faith of the people who believe in religion as much as it venerated these texts rely on the presence of a god to help make their faith work.

Ramayana, a Hindu epic tale, tells of the story of a young man destined to become king who battles demons to save the woman he loves and restore the order in his kingdom upon his return. While at the onset of the story it may seem that the story is hinged largely on the efforts of the mortal character, a deeper and further reading of Ramayana will reveal to the reader the extent of the role of the gods in this particular literary piece and the significance of the roles that the gods played here.

One of the roles of the gods in the story Ramayana is the role of the provider. Like the role of the other different gods, either found in the literary or as central personalities in real-life religion, the king Dasaratha raised to the gods his concern about the need to produce offspring so that his lineage will continue and someone from his bloodline will inherit the throne.

The gods’ action of granting the wish of King Dasaratha by providing the king with a bowl of nectar which the queens consumed and resulted to their pregnancy and the birth of four heirs to the throne showed the role of the gods as the provider for the human beings, particularly the provider of a future ruler who is very powerful and talented and at the same time a ruler that is in the good graces of the gods – Rama.

Rama was born with the aura of a person blessed by the gods – a first-born and heir, a talented young man with skill for both battle and leadership, worthy of kingship and worship that Rama’s father was easily calmed from the fear that something bad may happen to Rama and his brother Lakshamana at the eve of the start of their exile. “Do not fear for your sons,” said Viswamitra. “I have not run from demons in fear; but the retreat of a strong man is like the silent drawing back of a fist to strike a blow! (from Ramayana 48).”

Gods and their role in political intervention

But this action – the providing of the ability for the king to produce heirs – is not merely an act that demonstrates the role of provider. It also demonstrates the role of the gods as influential political dictators. Should the gods wished to place the rule of the land to another bloodline, they would have easily refused the request of the king and have the kingship of the land contested. But because the gods believe that the bloodline of Dasaratha deserves to rule this land, they allowed this particular political dynasty to continue, hence in the process affecting the political situation in the realm of the human beings. Another proof that the gods in the epic story acted the role of political dictators is the fact that the gods used the realm of the human beings as the stage where they can demonstrate their power and might against other gods.

The gods allowed king Dasaratha to have a child because it is through his child that the god Vishnu will take form as a human incarnate. One of the roles of the human incarnate form of Vishnu is to stop the wrong doings of Ravana, not only because Ravana will kidnap Rama’s wife (and Vishnu’s partner), but also because Ravana was blessed by another god Brahma of power that will make Ravana invincible to mortality and death if it will be handed to him by a god, a demon or a spirit. As a god but in the human form, Vishnu and Rama knew that through this, they can stop Ravana and put an end to whatever blessing the god Brahma provided Ravana.

Gods as the guide towards truth, light and what is right

An important role of the gods in the Ramayana is their role in letting the people and the readers know what the right path is in life. By assisting towards the victory of what is right and what is good, the gods did not only set an example which the faithful believers will follow through the practical applications in their day to day lives. But it also strengthened the image of god in the minds of the readers, believing that the god that they worship are the foremost followers of living the path towards what is right, fair and just for everyone. In the story, the god-characters opted for actions that is right, from the decisions of the king to the actions of Rama and to the eventual turnout of the events, wherein the theme of the good defeating the bad is very much noticeable and directly affects the consciousness of the readers.

The most important role of the gods in Ramayana is attributed to the fact that the central characters of the epic story, Rama and Sita, are both in fact the human form of the Hindu god and goddess Vishnu and Lakshmi, who are both incarnated as a human form and lived a romantic episode of their lives in a human form. “Rama, representing him as impersonal absolute existence, quiescent, contained within himself; Sita (the ‘furrow’, symbol of fertility) representing him as personal, creative, self-projecting. Both are recognized as God by all the characters in the poem, and as such are devoutly worshipped (Prabhavananda 85),” while Dutt was more straightforward when saying that “Rama, the true and dutiful, was accepted as the Spirit of God descended on earth, as an incarnation of Vishnu the Preserver of the World (Dutt 199).”

Rama and Sita’s different roles in the story are all automatically ascribed as the role of the gods in the story since Rama is a god and Sita a goddess after all. Because of this, it can be said that the gods had an indirect as well as a direct role in this epic story; the gods acting as observers as the story unfolds while the god Vishnu and goddess Lashmi takes an active and central roles in the story, as the story is much about the kingship and rule of a kingdom in the realm of man as much as it was a story about the love story and trials of a god and a goddess who are both in the human form. Besides Rama and Sita, there are also other gods who are incarnated in flesh, like Hanuman, the monkey leader who is believed to be the incarnation of another Hindu god, Shiva.

The epic story Ramayana is an important story for those who believe and follow Hinduism. There are many reasons why this is an important theological material for the believers of Hinduism, but one of the possible reasons is the fact that the gods used this story and used human life as the setting through which they will teach the humans about the path of right and wrong, about what is right and what is evil. “Distinguishing between the Ramayana and the Mahabharata, the author says in conclusion that in the Ramayana God had come to set an example of a life of dharma through mortal sufferings, whereas in the Mahabharata humans set the example. A life of dharma bridges earth and heaven, though salvation surpasses even heaven (Sivaraman xxxiv).”

The story Ramayana is important to the believers of the Hinduism faith because in this story, the gods are took a very active role, which may symbolize the idea that in real life, the gods are also taking active roles to ensure the safety of those who believe in them and to keep people from harm if they choose to remain doing what is right, like what Rama did (who is actually a god, Vishnu).

The story shows the many roles of the gods in the story. They acted as provider, providing the king and Rama’s father his wish. They acted as political dictators or even political hegemon, as the gods Vishnu, Brahma and Shiva, even in their flesh, human form, was largely responsible in the shift and ebb of the political tide present in this story of rule, kingdom and kingship, while the role of political dictatorship is also very much noticeable in even the simplest actions of the gods, like giving the king a son – an act which in the near future would have a serious political significance in the story.

The Role of Gods in Ramayana. (2017, Mar 23). Retrieved from http://studymoose.com/the-role-of-gods-in-ramayana-essay 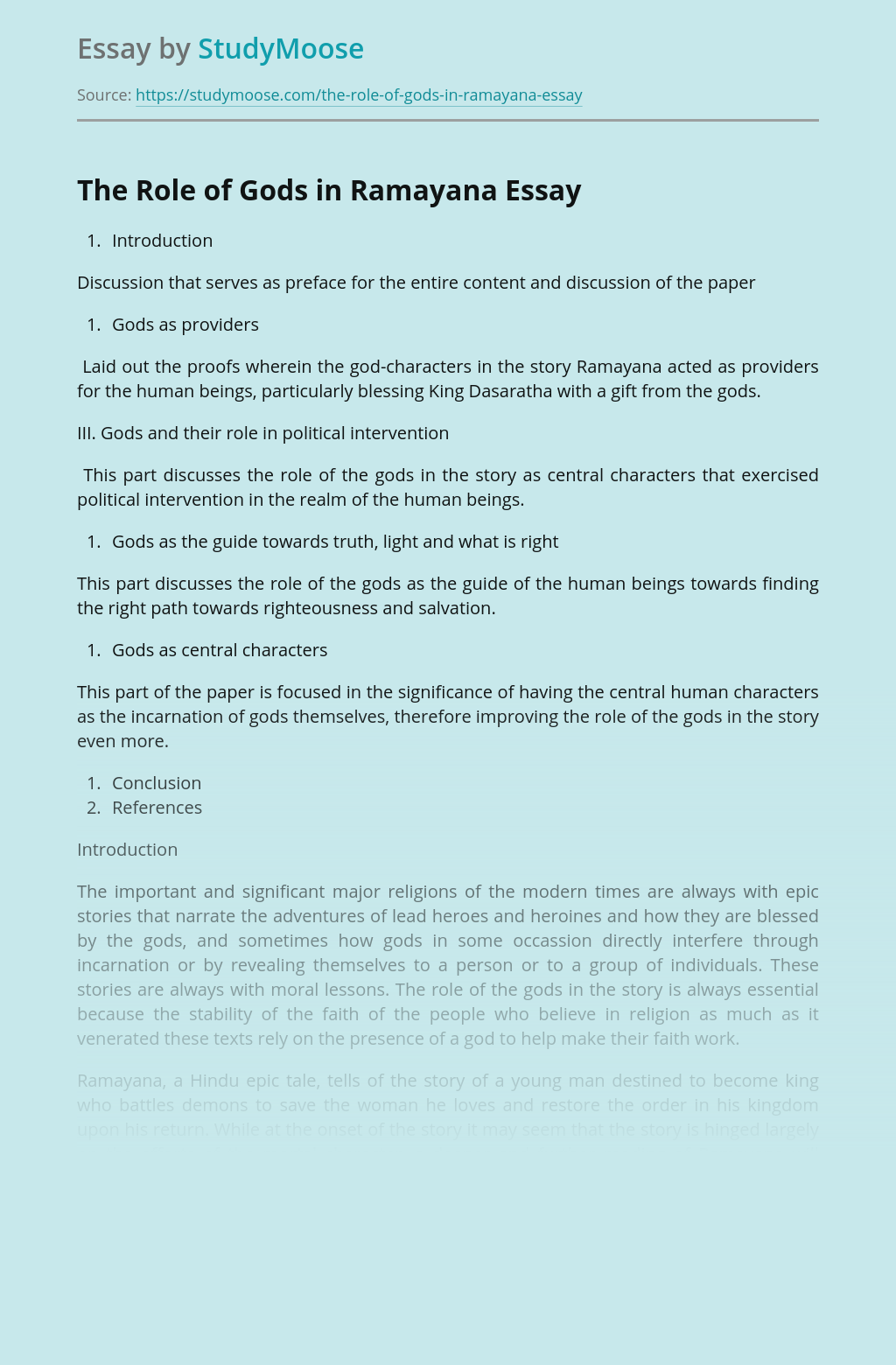 Don’t waste time
Get a verified writer to help you with The Role of Gods in Ramayana
Hire verified writer
$35.80 for a 2-page paper
Stay Safe, Stay Original