The themes of journey and exile in Ramayana and Gilgamesh

A hero is originally seen as a hybrid of a god and a mortal, this myth is being seen in classical literature and beliefs (Hamilton, 14).  Since then, the definition of a hero has progressed to an  individual who displays extraordinary courage and self-sacrifice in a time of adversity.  The modern context of a hero is an ordinary individual able to overcome odds and  surreal circumstances piled against him or her, and such heroism is backed by numerous qualities that stand for what is right (Fox, 24).

Turn in your highest-quality paper
Get a qualified writer to help you with
“ The themes of journey and exile in Ramayana and Gilgamesh ”
Get high-quality paper
NEW! AI matching with writer

Ancient literature concerning heros’ journeys are a mixture of fantasy, history, and adventure, most of the protagonists are part god and part human.  The stories also relate adventures with divine or supernatural intervention. In numerous insrtances wherein epic tales of heros become significant to a culture, nation, and religious beliefs and practices (Hamilton, 13).

The hero is usually involved in struggles against an adversary or adversaries that serve as the conflict.  The heroic individual epitomizes chracteristics, does  deeds, and embodies values (Fox, 24) from the epic’s country of origin.

As present in the Ramayana and the Epic of Gilgamesh, the two characters have divinity in their, Rama is an incarnation of the Hindu god Vishnu, while Gilgamesh is said to be part man and part god (Dalley, 3).  Apart from their divine blood, Rama and Gilgamesh set the standards of heroism through adventures in the wilderness as well.  The Ramayana and the Epic of Gilgamesh are two ancient works that tell the tale of individuals who encounter challenges in their journeys, and are highly influential in various literary works of the contemporary period.

In any case the Journey of characters in almost every epic always turn out to be the path to heroism, hebce fulfilling the character’s inevitable destiny of becoming the hero.

The Heroism of Rama’s Journey

The Ramayana is an ancient Indian tale about a young prince Rama and his journey to save his wife Sita who was abducted by the demon king Ravana.  The Ramayana is a compound of the words Rama and ayana, which means advancing, and translates to english as Rama’s Journey (Brockinton, 116).  Ramayana implies values and moral standards for readers to follow as Rama’s heroism exemplifies throughout the epic.

In the Ramayana, Rama’s exile and journey are products of treachery and jealousy,  from one of his father’s wives and from supernatural beings.  The idea of eliminating Rama’s claim to the throne came upon his father, Dasharatha’s announcement of his co-regency over the kingdom of Ayodhya (Buck, 60) as one of Dasharatha’s wives, Kaikeyi becomes jealous, with the influence of her evil maid Manthara, since Rama is chosen to be the co-regent instead of Kaikeyi’s son Bharata (Buck, 67).  King Dasharatha is then forced to disrupt Rama’s rise to co-regency due to a wish he once promised to grant to Kalkeyi (Buck, 73).

The three set on a course to the Dandaka forest where they met and befriended Jatayu, the Vulture King.  The conflict then comes in as Supranakha, the sister of the demon lord Ravana, shows interest in Rama and his brother Lakshmana, but the insideous plot is thwarted because the brothers show no signs of giving in to temptation.  The female demon then turns to her brother who gets interested in Rama’s wife Sita.  Ravana consequently plots to capture Sita with the aid of another demon named Maricha (Buck, 161).

Maricha guises himself as a deer to deceive Sita and Rama, as the devious plan progresses, Maricha makes death cries in Rama’s voice.  Maricha’s deception prompts Lakshmana to follow his brother, hence, leaving Sita alone and vulnerable for Ravana to abduct (Buck, 164).  The demon king now captures Sita by mimicing an old sage in search of nourishment (Buck, 167).

Rama’s exile in the forest is a traditional depiction of heroism as he accepts his father’s command without question and objection.  Beginning with the treacherous stealing of his right to glory, Rama maintains composed in spite of the malicious act, that is secretly done against him.  Rama also holds no grudge against his father despite the event that he is casted out in to the wild.  Rama’s nobility is also furtheres by his generous heart wherein he gives way for his brother’s succesion without any hint of jealousy.

Valmiki shows Rama’s tenure in the wilderness as a challenge, considering that the latter is born of royalty and is therefore used to a life of fame and pleasure.  In the journey itself, Rama displays not just heroism but love as he serves and protects his wife with the best of his capacity.  It is well known that heroism cannot be practiced without conflict, and therefore, a hero in a story will not be called such without a villain.  In the Ramayana, this comes in the instance where Ravana’s sister Supranakha is rejected by both Rama and Lakshmana in her ploy to seduce the latter two (Buck, 158).  Of course, as every protagonist and hero of stories employ, Rama and his brother show no signs of weakness.

The environment in the epic of Ramayana is utilized in almost every means necessary, first is on the the manner of how Sita is abducted.  The demon king’s aid is guised as a deer, theredore, taking advantage of Rama and Sita’s naivete, to lure the mighty hero to a wild goose chase.  The dangers of the wilderness are also taken advantage, since the forest is known to be home of vast numbers of species and outcasts, Ravana guises hinself as an old sage seeking nourishment and provisions, thereby causing the unsuspecting Sita to be vvulnerable to abduction.

The Epic of Gilgamesh

The Epic of Gilgamesh on the other hand is an ancient Mesoptamian epic and is arguably a work of literary fiction.  The epic also has Akkadian and Babylonian versions but the Mesoptamian version is considered to be the original (Dalley, 39).  In any case, the Epic of Gilgamesh revolves around a king who has become bothered by his rule, with focus on several journeys with his good friend Enkidu and Gilgamesh’s search for immortality.

The epic of Gilgamesh basically encompasses on the central character’s macontentment in life.  Gilgamesh sets foot on a journey to the wild in his own interest and will.  Gilgamesh is no longer blissful about his rule as king as he sizes his days in boredom of his kingship.  Conforming to what the epic tells, Gilgamesh seeks for excitement and adrenaline pumping action in which sitting on the throne does not achieve.  It is made blatant in his journey to the cedar forest that he wants bloodbath, brain bashing, and brutality.  The two do not fear the legends of the forest but instead even looked for the monstrous being that is said to b lurking in the area.   They searched in all areas just to inflict pain and kill the beast.

The concept of compassion is another underlying theme in the journey of Gilgamesh since the feeling is aroused prevalently on Gilgamesh and Enkidu.  Primarily because Gilgamesh and Enkidu encourage one another in moments of fear, doubt and uncertainty.  Enkidu shows signs of fear prior to their journey to the mystical forest of Cedar, likewise, Gilgamesh also trembles upon facing the the guardian Humbaba (Kovacs, 40).  The journey in the Epic of Gilgamesh furthers compassion as the two heros depend on one another when the feeling of invulnerability arises.

Rama, as an epical hero use devotion and compassion in fueling his courage.  Initially, prior to his journey to the Dandaka forest, he chose not to contest his father’s decision of casting him out, he instead willingly obeyed his father’s will without question.  Gilgamesh is similarly  compassionate and and devout as he and his good friend Enkidu mutually support and sncourage one another in their time of need.  The adorementioned chracteristics however do not fuel Gilgamesh’s courage, but his thirst for blood and senseless violence do.

Rama did whatever means necessary to get his wife back.  As the epic notes, Rama pulled in all favors, and did favors for people to acquire aid in saving his wife.  Rama embarks on a journey to unknown lands to just to at least have a glimpse of his beloved wife once more.  Gilgamesh, meanwhile, embarks on a journey to erradicate boredom from the daily routines of his kingship.  The similarity with Rama only came in upon his good friend Enkidu’s death, wherein he desired to reach far places unmindful of the perils along the way just to seek for immortality, for his friend Enkidu, and for himself as well.

The themes of journey and exile in Ramayana and Gilgamesh. (2017, May 07). Retrieved from https://studymoose.com/the-themes-of-journey-and-exile-in-ramayana-and-gilgamesh-essay 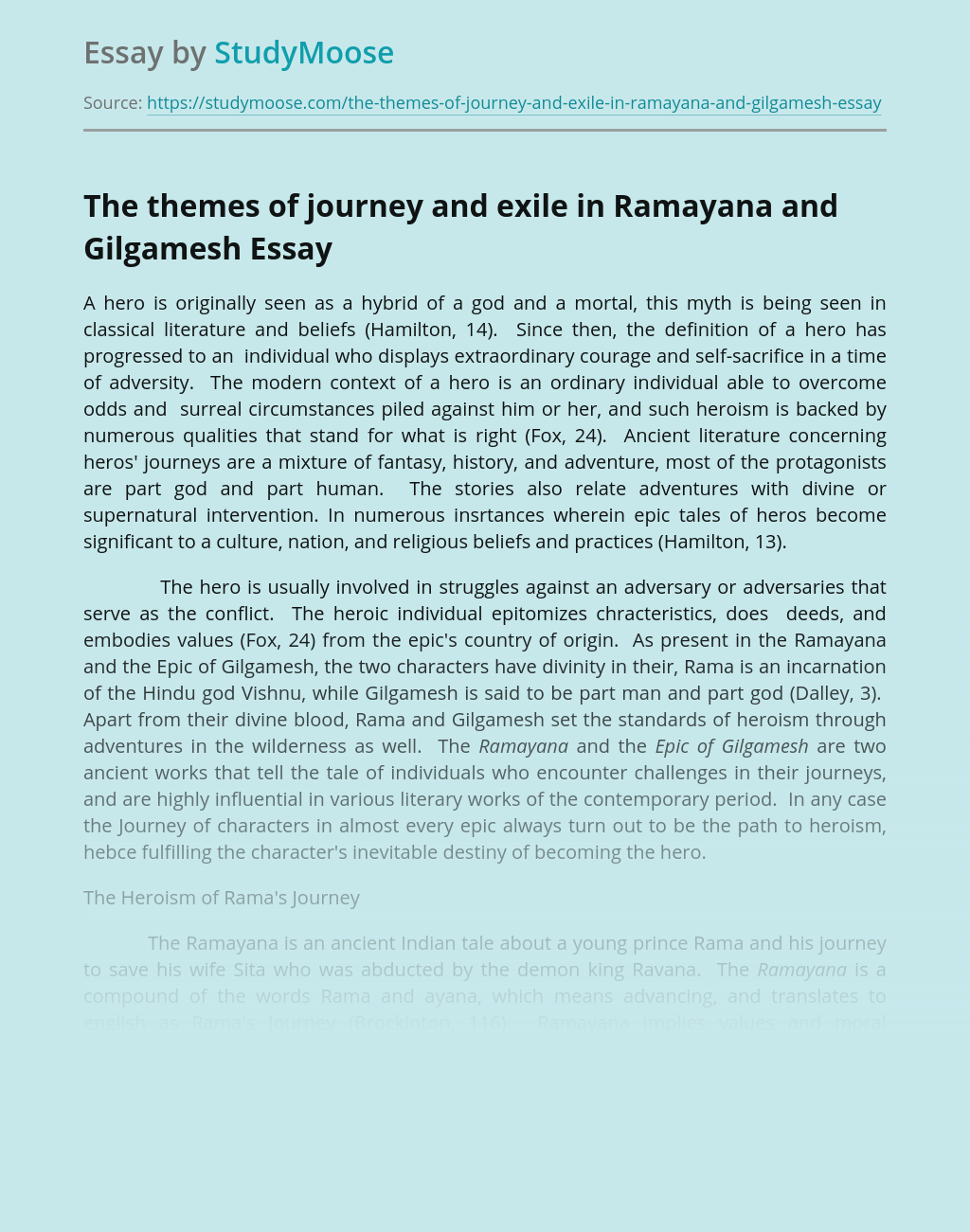 Turn in your highest-quality paper
Get a qualified writer to help you with
“ The themes of journey and exile in Ramayana and Gilgamesh ”
Get high-quality paper
Helping students since 2015
Stay Safe, Stay Original