Bon Voyage, Mr President is a short story written by Gabriel Garcia Marquez. This is a tale of a South American President in exile. Nearing the end of his days, we are given an insight into the life of a man with injured pride, reminiscing the days that went by and so fast, where the President had lost everything he had worked for and knew.

‘Resting on the silver handle of his cane’

This quotation emphasises the Presidents elegance and importance.

Get a verified writer to help you with A Great Leader in Bon Voyage, Mr President

His importance is enforced by the fact he carries a cane and not a common walking stick. A cane being the common tool of intimidation used by the military and by those who feel they are superior to the average civilian. The silver handle on the cane illustrates his elegance. He had style, elegance and capital, as well as authority, his overall effect being a man of status.

‘He was one more incognito in the city of illustrious incognitos’

This quotation is a contradiction.

Incognito means in disguise, while illustrious means to stand out. This paradox sums up the President; he wants to not be noticed, but still wants fame. So while wearing clothes everyone else was wearing, something would make him stand out. He wants fame and power, but not for being the President in exile.

Where the president dressed stylishly, with fine clothes, and his hair did not give away hints of age, with strands of grey hair, his skin was haggard and wrinkled that of an old man.

The quotation shows that the president looked young and acted young, and if it were not for his skin he could have passed for a younger man.

This is a good example of Rhetoric. It uses sub textual language and Marquez uses persuasive writing. This statement implies that the president was very powerful and using the gulls as an analogy, compares them to civilians and how, once, they were at his beck and call.

This quotation is a contradiction; the stereo-typical poor person would not be powerful. This paradox expresses how the President must have felt. Opposed to his power and wealth from running a country, he was now somewhat inferior. In exile in a foreign country, he was surrounded by men that were raised in this milieu. Powerful, by the means, that they knew and almost dictated how everything worked.

This quotation is a pejorative fact. The President might feel it a positive situation, as he could not be tied emotionally to any one place, so he cannot be hurt if he is, once more, thrown out, as in the case of Columbia. However it could also be a negative factor because things that will be a necessity for a comfortable life, e.g. a job, would be almost impossible to achieve.

Perplexing Simplicity of a Lack of Nothing

‘One never can see the thing in itself, because the mind does not transcend phenomena’

This statement has sub textual meaning. On the surface it means, you cannot see something if the mind does not believe that it can out do the extra-ordinary. But underneath that, I feel that this quotation almost has a moralistic sub textual meaning, this being if you think that within yourself, you can’t do something and you don’t attempt to, you will never be able to. Once convinced it is impossible, it is.

‘My vision began to diminish in both scope and clarity, and I prayed despondently for the message that I had left to be procured by those to whom I had intended it, and not by those to whom the exorbitant value was exceeded only by their macabre predilections’

This quotation is a fine example of the stereo-typical religious belief that praying in a difficult situation, you will be relieved of all problems. The character looks towards G-d to firstly protect him and secondly protect the information he has been entrusted with being recounted to the wrong people. The character believes that g-d will help him and this is a very good illustration of idolism.

There are many comparisons to make between the above eight quotes, as well as between the three extracts, all being entirely individual pieces. Bon Voyage, Mr. President and the Reconstruction are both somewhat related in the means that they have the same story line and background, the similarities very evident. But, however, The Perplexing Simplicity of a Lack of Nothing is a very diverse piece of writing, expressing confusion, desperation and obscurity opposed to Bon Voyage, Mr. President and the Reconstruction, which was full of prosperity and understanding. All three of these extracts were well written and individual; however there are criticisms to be made.

The President, in Bon Voyage, Mr. President, is a stereo-typical, military based, authoritarian figure. Things like ‘…stiff hat of a retired magistrate.’ Or ‘…arrogant moustache of a musketeer.’ all present the image of man in control, who would not commit a crime. In this description, nothing gives away any shrewdness or a clue that would reflect the offence he committed to be exiled. Marquez keeps some key information that would allow the reader to be more gripped by the short story, secret, and that, I feel, almost ruins the whole tale. By using a more Rhetoric type of writing the reader would find Marquez’s writing more intriguing.

The Reconstruction is meant to be linked to Bon Voyage, Mr. President, however the author portrayed Mr. President as quite a different character. The author implied that the President was a laid back man, with much hope and little regret; he was looking towards the future and not at the past by saying ‘He now had a bounce in his step and he changed into a silk shirt with cotton shorts’. This Rhetoric gives the opposite impression to which Bon Voyage, Mr. President was trying to bestow. This is an easy mistake, but if read together would confuse the reader.

The Perplexing Simplicity of a Lack of Nothing is a very difficult piece to understand, with maybe hidden meaning. There was hardly any significance that could be drawn from it. A huge failure, of the author, was that, there did not seem to be any constant story line, there was a base, but the majority jumped from idea to idea. Also, the words used were difficult to comprehend in a short story and too many used too close together. This material was more novel quality rather than an extract or short story, the author should have kept in mind what type of story they were asked to compose and not trail from it.

Get a verified writer to help you with A Great Leader in Bon Voyage, Mr President 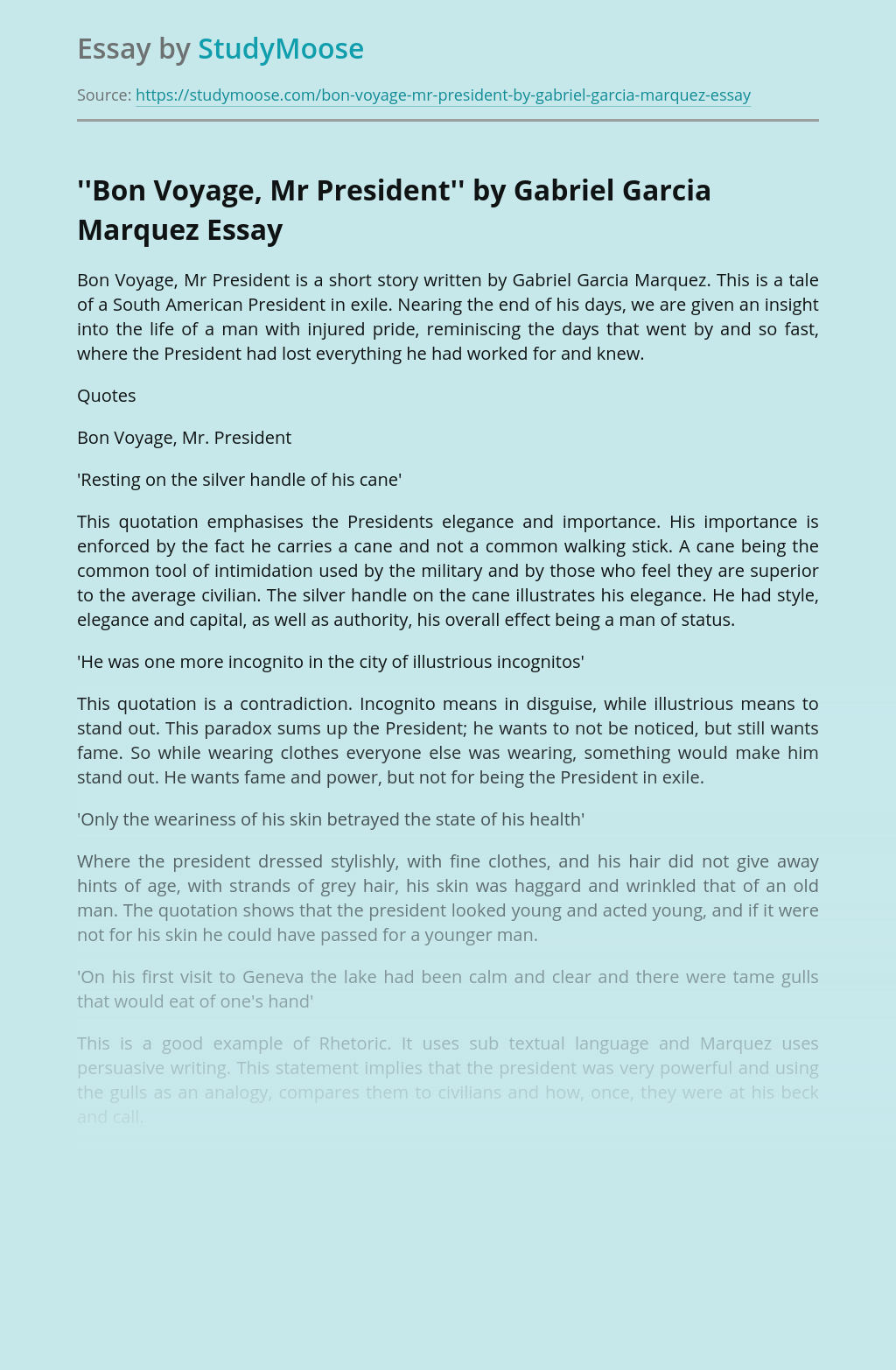 “The Bath” by Janet Frames

The Tribulations of Old Age We often entertain this romantic and sentimental assumption that old age is a time of peace and happiness after a whole life devoted to work and the family; it’s a time to enjoy the full benefits of one’s hard work and efforts. In “The Bath”, however, New Zealand writer Janet...

Amy Tan’s “Two Kinds” and “Best Quality” depict a struggling and often stressful relationship between a defiant daughter and an overbearing mother. June Mei and her mother Suyuan engage in a destructive battle between what is possible and what is realistic. June, although headstrong, seeks her mother’s approval and adoration. Suyuan, although patronizing, yearns for...

Get Essay
Analysis of "The Happy Man" by William Somerset Maugham

William Somerset Maugham (1974 – 1966), a well-known English novelist, short-story writer, playwright and essayist, was the son of a British diplomat. He was educated at King’s School in Canterbury, studied painting in Paris, went to Heidelberg University in Germany and studied to be a doctor at St. Thomas Hospital in England. Although Somerset Maugham...

Since early childhood, Jose Rizal already loved books. His mother, Doña Teodora Alonzo taught him how to read a material in Spanish language and developed his mind and artistic talents by telling him wonderful and colourful stories and poems. Furthermore, his Tio Gregorio, a book lover, intensified his reading of good books. The favourite pastime...

The Effects of Unexpected Isolation

Does the thought of being separated, dislocated, and isolated from all previous and familiar contacts create fret? Maria, in “I Only Came to Use the Phone”, by Gabriel Garcia Marquez, has been so isolated and dislocated in the past that she has been accustomed to it. The world, as a whole, views isolation and solitude...