The case study is about one of the best known and best playing soccer team in the world, Real Madrid. It tries to backlight the myth of soccer and the tremendous merchandising system behind soccer. Especially the era of Florentino Pérez, who brought a new dimension in managing and merchandising soccer clubs to Spain, will be analyzed in detail.

Nearly every child kicked a soccer ball once in his live. More than 240 million people play at least once a week. Such a big sport needs a big parent organization in its background. This job is done by the FÉDÉRATION INTERNATIONALE DE FOOTBALL ASSOCIATION (FIFA). The FIFA which was founded 1904 in Paris established a unified set of rules. This rules are easy to understand and are of course one of the reasons why soccer is so popular all over the world.

Also the time a soccer game lasts is defined by the FIFA, its two halves of 45 minutes split by a 15 minute brake. In elimination games an overtime of two times 15 minutes and also a penalty shoot-out at the end of overtime is possible.

This is a big advantage for sponsors and TV broadcasts compared to other sports like American football or boxing where the time for a game or fight is nearly unpredictable.

You can have 12 rounds of barn-storming fight or a knockout after 10 seconds. At soccer games they can calculate and time their spots and broadcasting exactly. There is also the FIFA World championship which is the second largest worldwide sport event beside the Olympic Games. In 2002 the FIFA World championship had a cumulative audience of 28 billion viewers over 25 match days. This huge audience is another reason why soccer is so interesting for sponsors. The European soccer is organized by the UEFA and its 52 national associations. The UEFA Champions League is the mayor seasonal competition for the best European clubs and the stage for teams like Real Madrid and Manchester United.

In the past gate receipts were the most important income for a soccer club, also for professionals. But in the 1990s a change of business model went through the professional soccer teams in Europe. In Europe the hosting club of a soccer game receives all the gate receipts. Another source of income is local sponsorship. But the new merchandize model targets a worldwide audience. Manchester United for example was able to allocate 45 million supporters worldwide. Compared to the 6 million supporters in their own country this was a totally new market with huge chances. To supply all different target groups of fans they set up sub brands like “Fred the Red” for children selling T-shirt, balls etc, “MUFC” for teenagers selling products with attributes of rebelliousness friendship. “Red Devil” targets adults and give taste of leadership and winning to their customers in a higher price segment. Another very important platform for soccer fan is the homepage of their favorite clubs. For example a user registered to manutd.com will spend about 1500€ for games and promotion products in a lifetime.

In Spain soccer is the most popular sport. There are 620 000 active players playing in over 10000 soccer clubs. Professional soccer is organized in tree national leagues. Real Madrid and FC Barcelona are the biggest clubs. They won nearly two-thirds of the national championships. Soccer is more than just a game in Spain it’s a passion and if you support a team you support it for lifetime. Because of these facts soccer is such a big business in Spain. Real Madrid was founded in 1902 by a group of Spanish soccer fans as Madrid Foot Ball Club. In the 1920s the King of Spain granted the title of Royal to the club Real Madrid was born. Santiago Bernabeu a former very famous player became president of Real in 1943 and herald a new era. By selling fan-bonds he financed a huge stadium for 75000 people, the Bernabeu Stadium. Bernabeu spent a huge amount of money to bring the best player in the world to Madrid. The result was a series European Cup titles.

Real became the best known soccer team in the world. After the dead of Bernabeu in 1978 there was a decline for nearly two decades. The new club manager Sanz started a kind of a closing sale to raise capital. He sold players, several core assets like media rights and stadium exploration rights. He also signed longtime contracts for VIP areas and sponsorship to really bad conditions. Another aspect was the Bosman case in 1995 which leaded to a big change at the European transfer market. Real Madrid still spent nearly 85% of revenue for player salary and transfer-fees. This cost had to be covered by the different income sources. The 2000 revenue of Real Madrid was about €138 million and resulted from €42 million match day income, €45 broadcast and pay-TV fees, €39 million marketing income and about €19 million from international competition. On the opposite side there had been costs of €161 million. The result was a loss of €23 million.

In 2000 Florentino Pérez took over the management from Lorenzo Sanz. The club was competitive in soccer but in financial straits. Perez was the first who really recognized the potential of Reals popularity all over the globe. But the marketing and operational strategy did not match the reputation in sports. Mr Albornoz the managing director of finances and legal affairs mentioned a missing mission for the club as one of the problems in managing REAL. The goal was to manage the soccer club like a professional organization and make decisions based on facts and not on emotions. Perez restructured Real Madrid based on his experiences in running a huge Construction Company. The mission statement was defined as being the best soccer club in the world.

Real Madrid in Football History. (2016, May 13). Retrieved from https://studymoose.com/real-madrid-in-football-history-essay 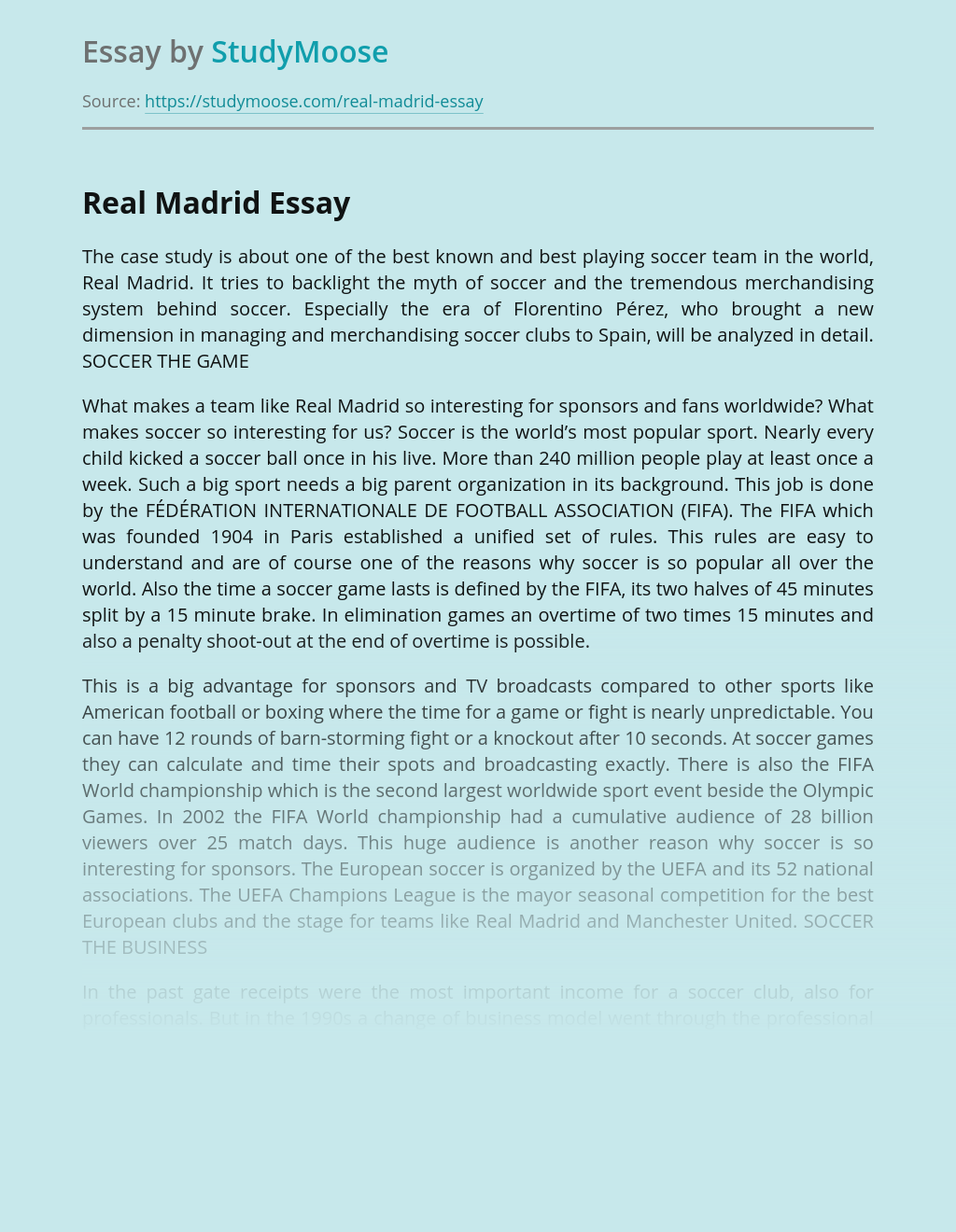 Rate this post Football is among the best sports in the world in my opinion. My entire life has been surrounded by football as both my papa and papa were crazy over ‘Rangers Football Club’. As I matured I remember them both telling me stories of how they bet their school teams and about how...

Rate this post Introduction Arsenal Football Club is an English Premier League football club located at North London. It has won 13 First Division and Premier League titles and 10 FA Cups, which makes them one of the successful clubs. Arsenal holds the record for the longest uninterrupted period in the English top flight and...

Get Essay
The Beutiful Football Game

Rate this post Many people think soccer is a game of intensity where winning is everything but that is not always true. To me soccer is having fun. Some people have what it takes and others do not. Soccer is intense, but winning is not everything. Enjoying the game and playing the way that makes...

Rate this post “Homecoming Queen” redirects here. For the thoroughbred racehorse, see Homecoming Queen (horse). Homecoming is the tradition of welcoming back alumni of a school. It most commonly refers to a tradition in many universities, colleges and high schools in the USA. It usually includes activities for students and alumni, such as sports and...

Rate this post Sugar Bowl Shelby Givens checked her watch as she jogged along Raleigh’s Greenway Trail; she was running late again. Since Sugar Bowl’s launch, there simply were not enough hours in the day to satisfy the overwhelming demands on her time. Givens couldn’t remember the last time she went to dinner and a...

Rate this post Soccer is one of the most famous and most viewed sports around the world. Every country has its league, and every league consists of a certain number of competing teams. Modern soccer, or soccer as we now know it, started in England; the home of the Barclays Premier League. The Barclays Premier...

Rate this post Edson Arantes do Nascimento named after the famous scientist and inventor of the tube light “Thomas Edison” instead there was no ‘I’ in his name but there are records which shows Edison which is miswritten and he was nicknamed Dico by his parents. He was born onto the the poverty struck land...

Asset of a ‘Home-Grown’ Football Player

Rate this post Word Count: 990 Give an example of an asset that is not recorded on a balance sheet, and critically evaluate why it is not, before developing an argument for the inclusion of the asset. Whether or not certain assets and liabilities should be placed on a balance sheet is a much talked...