Fan violence in international soccer is a very serious form of aggression and it must be given a lot of attention by the games’ stake holders. Fan violence in international soccer involves actions that are taken by the football supporters and fights between the supporters of rival teams may sometimes take place after the football matches. The fights could also be prearranged in locations that are away from the stadiums so that the fans can avoid the police interventions.

Fan violence can be at times be prompted by violent actions which involve the players themselves or any other form of event that could be taking place during a game or even disturbances and riots that are sport related and often they occur for other reasons.

Don't use plagiarized sources. Get your custom essay on
“ Fan Violence in International Soccer ”
Get custom paper
NEW! smart matching with writer

Fan violence in international soccer has been on the increase as it is known as the existence of an essentially unstable and an abnormal temperament in some individuals who happen for some reason to have taken soccer as an arena in which they act out their instabilities.

It has become very difficult to deal with the offenders in the football matches and the international football federation has had difficulties punishing the spectators who misbehave themselves . The international football federation has also had to deal with issues that prompt fans violence in soccer matches such as providing seats in place of standing accommodation, initiating maximum cooperation between the police and the football clubs and also ensuring that there is an absolute acceptance of the referees decisions by everybody in the football arena.

The key stakeholders of the soccer game are the international football federation who ensure that the punishment that is given to the offenders and to those who participate in football hooliganism should match the seriousness of the offence. It is notably very true that the consumption of alcohol is a very important factor in crowd misbehavior especially in places where the football matches are taking place. (Smith, 1987) The football fans are mainly controlled by the activities and the popularize of different clubs .

This makes it a contest as they embark on slogans chants and even songs so that they can demonstrate their support to the teams they support. The violence that exists between the sets of fans is seen as a part of their participation in the game. Violent fans and those who mainly participate in violent actions in the international soccer are basically those people who are young and unemployed. It also involves also those who are members of fanatic clubs and they are poorly educated since they attribute most of their behavior to the external factors rather than the internal ones.

In most case there are usually two matches going on in a football stadium and whereas one match concerns the football teams that are on the pitch and the second match usually involves the fanatic fans whose interests are not in the game as such but on the opportunities which are offered by the football such as meeting the club mates and giving vents to their emotions and energies in the battles with others. (Smith, 1983) It is at times very complex to handle fan violence in soccer ethically since the game requires intense physical contact which may cause harm of injury.

When the stake holders access the moral status of an action, they examine the issue of consent by the person on whom the action has been performed. Actions by the fans which are outside the rules of the federation of international soccer are considered to be morally unacceptabl. 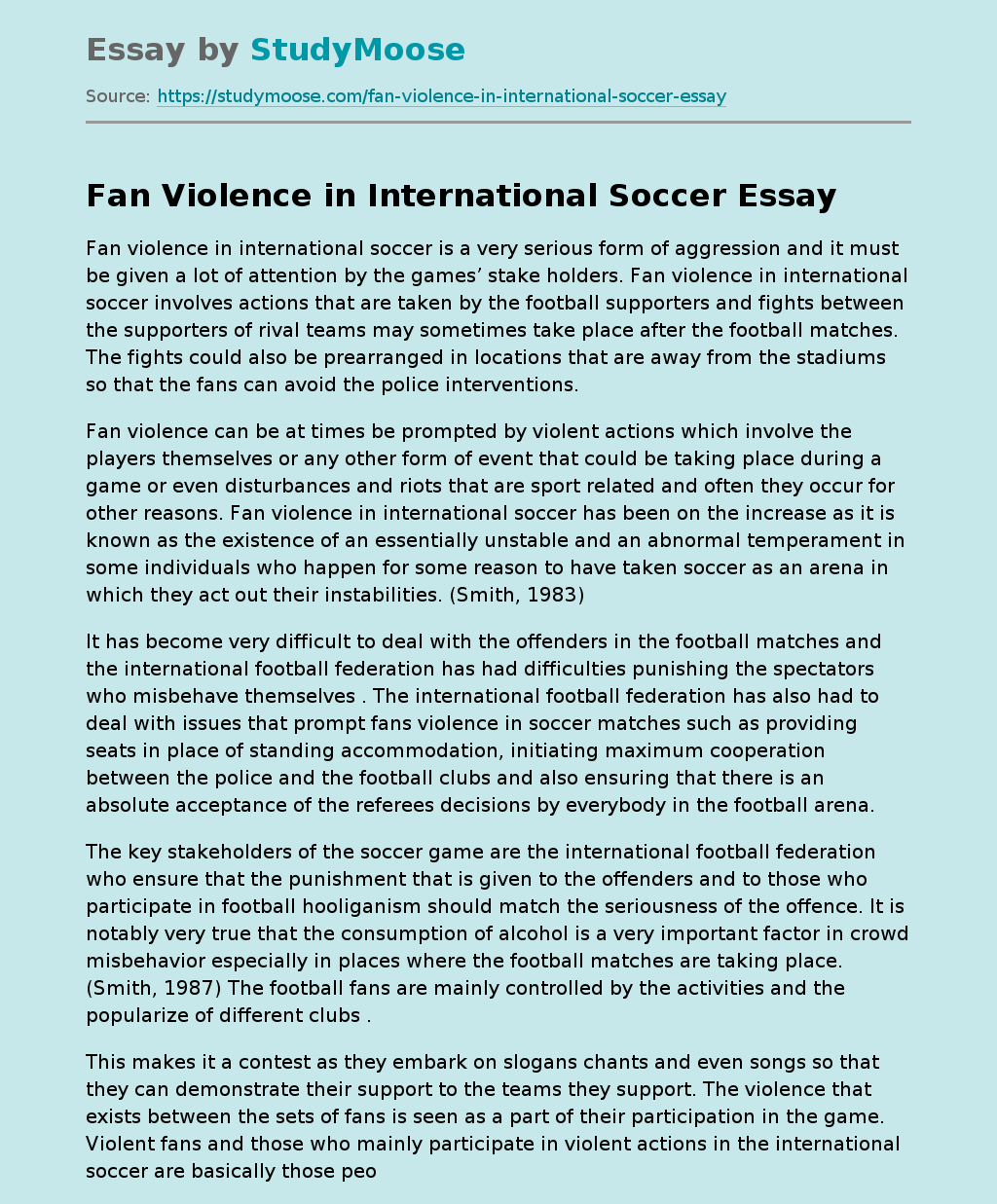