Exile or even exclusion has shown to have deep effects on a person. It can break you down from the person you once strived to be, or it can make you into a more enriched person. In Shakespeare’s King Lear, the character, Kent, went through an exile that caused his character to have a potent and enriching experience. His experience alienated him from the relationship he and the king once shared, but eventually led to him letting out his feelings to an unsuspecting fellow, creating a closer relationship with his beloved king, and even connecting him to the dear Lear’s adored Cordelia.

Don't use plagiarized sources. Get your custom essay on
“ Shakespeare’s King Lear ”
Get custom paper
NEW! smart matching with writer

During the time in which Kent was exiled, he was excluded from the honor of being a nobleman. He was less respected than before, and estranged from the title and life he once held. However, through this opportunity, Kent was able to ‘vent’ out some feelings he held over another man. His disguise allowed him to hold more power than he had before as Kent erupted with a slew of enragement he held against the character Oswald.

He skewered the shocked Oswald with a slanderous tongue, and was empowered by the exile that allotted his disguise and release of anger. This particular scene emphasizes how those who seem to hold the least influence actually hold further supremacy. This relates to other characters as well, such as the Fool. Among the occasion that Kent went undercover; the king was unable to recognize him. Some might think this tragic because Kent seemed awfully fond of Lear.

However, this experience was essentially supplemental to the relationship between Kent and the King. Lear appeared to trust the disguised Kent more than the one he could recognize from his past, and the connection between the both held a stronger bond than before. His exile once again has enriched the ‘unfortunate’ Kent, relating in the theme that literal blindness holds more sight than when we are able viewing the world through our natural vision. Not only did the banishment of Kent lead him to a connection with the King, but it led him to come closer to another banished victim: Cordelia.

Both suffered from the ungrateful wrath of Lear, and that key unlocked a new world for both the exiled peoples. Although Kent was in disguise within Cordelia’s camp, she was still able to recognize her father’s companion and ally. The relation between the two became undeniable by that point, and it stressed the theme that innocently expelled victims of Shakespeare’s work were the ones who could see the factual truth. Although the expulsion of Kent from the kingdom was encrusted with the air of being unfortunate, it turned around and became one of the more enhancing opportunities of his life. It opened up new doors and allowed him to release emotion, bond with his King, and connect with the darling Cordelia. His experience strengthened him and the themes and elements of Shakespeare’s enchanting King Lear. 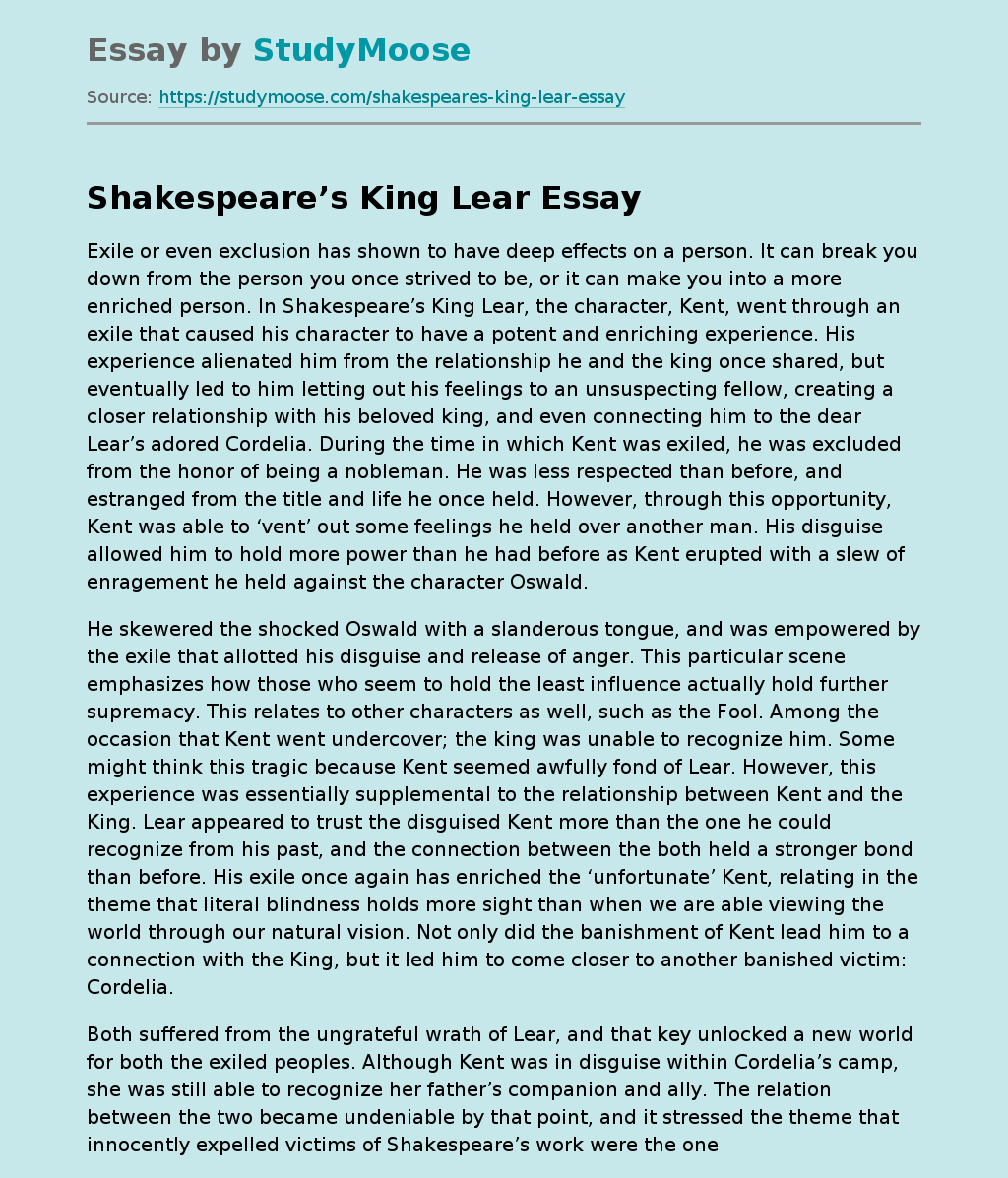