Due to his continuous fight against the Spanish government and friars, Rizal was thrown to Dapitan. He made his life in Dapitan worthwhile by stretching a hand to help his fellow Filipinos there by executing his abilities to teach the children, to cure the sick and manage a small farm. Then he fell in love with an American lady namely Josephin Bracken, who went to the Philippines to seek medical help for her blinded stepfather. They married but failed to keep their child.

Don't use plagiarized sources.
Get Your Custom Essay on Rizal Sa Dapitan Just from $13,9/Page

The movie ended when Rizal went to Cuba with his family.

Rizal sa Dapitan was a good portrayal of Rizal’s life while in Dapitan. Albert Martinez portrayed Rizal in an impressive way – a well-mannered gentleman, intelligent, respectable and handsome. The choice of actress of Amanda Page as Josephine Bracken was also rational – white skinned and beautiful, really American like. But Candy Pangilinan as Rizal’s sister was a bit unconvincing because she is a comedienne. That scene of her and Rizal arguing seemed like she was trying to make us laugh.

The script was also excellent.

Rizal used deep words, like a poet, like Edgar Allan Poe, the what we call as ‘matalinghaga’, and it showed us how intelligent Rizal was. They also used Spanish words which made me say, ‘What? Anu raw? ’ because there were no subtitles. The picture quality was not that good and the cutting of the scenes was confusing. For example, Rizal was talking to Father Sanchez then it abruptly switched to the scene when they were having some coffee. The movie also lacked music to add more emotion into every scene.

For example, in the scene when Josephine Bracken’s baby was being miscarried, there should have been music with an emotion of fear or fright. In the scene when Rizal was burying the baby, there should have been sad music. When it comes to the lessons that could be found in the movie, certainly much can be found in Rizal sa Dapitan. It taught me about the value of life and the beauty of children when Rizal and Bracken’s baby died. It taught me about the importance of freedom, and how to still live normally and fully if it had been denied of me.

It taught e not to cease and wither when it comes to fighting for what I think is right. Rizal sa Dapitan is not really a must watch movie, but as a history student or as a person who wants to discover deeper who Rizal really is, or know more about Philippine history, there’s no harm to give it a try. Rizal sa Dapitan was good, the choice of characters was also good, but there should be improvements in the script, cinematography and music. I think the highlights of Rizal’s life was not just only when he was in Dapitan, but during the climax of events before his execution. 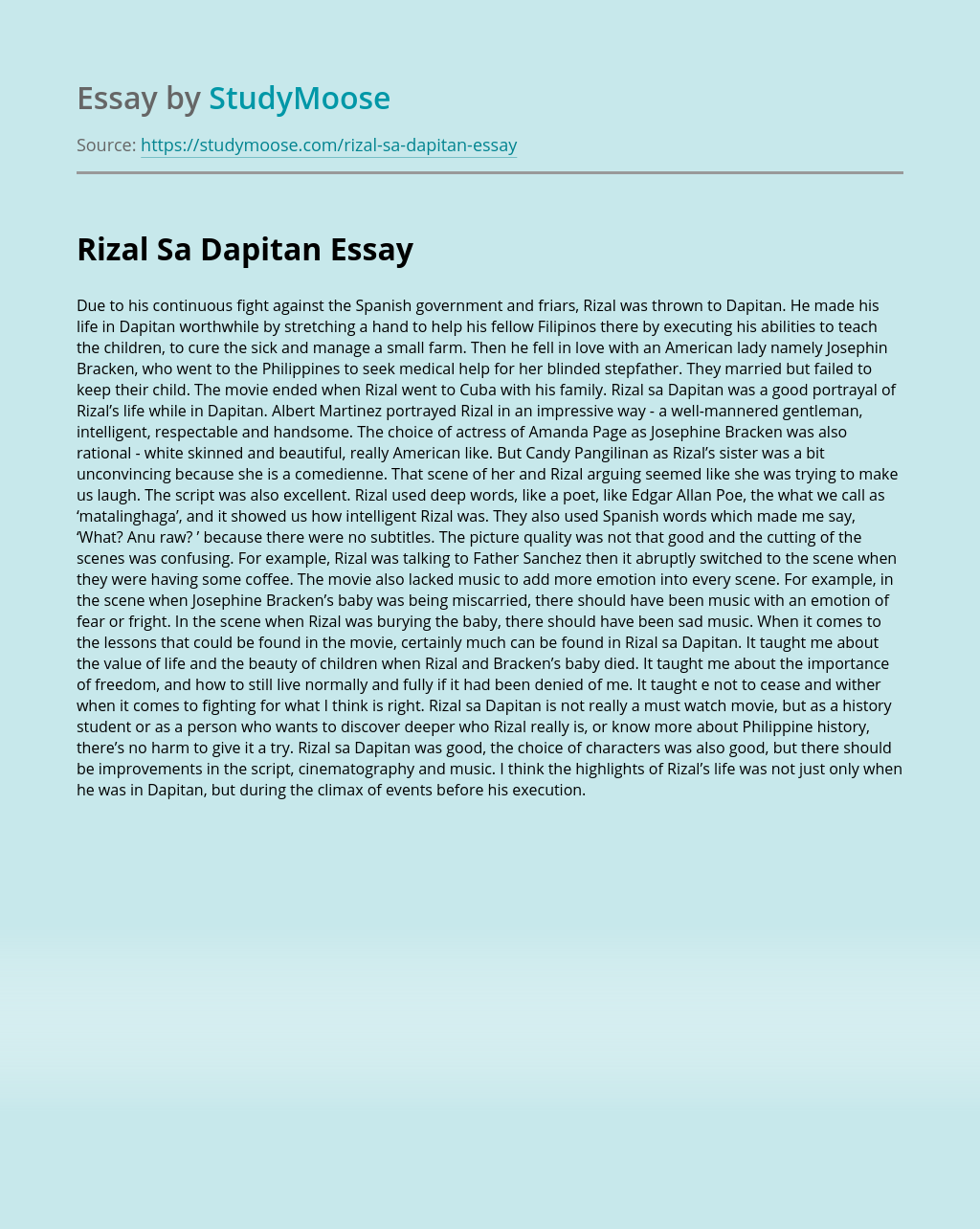 My quote is “Had my brother really seen me somehow, or was he merely a little boy telling beautiful lies? ” on page 95. Susie had said this while she was observing her brother from heaven. This quote has significance because I believe that Susie wants to be remembered, because as she said on page... VIEW ESSAY

The story takes place in the fertile, eastern lands bordered by the Mediterranean Sea and kept by the gods. Within the cradle of ancient civilization empires are built, wars fought, alliances forged, and heroes born. Agamemnon, king of Mycenae, has united most of Greece’s kingdoms under his rule and now advances his army upon the... VIEW ESSAY

When preparing a movie production a great deal of things require consideration, for instance money is a crucial component that will be needed to money the production of the film, with the crew/cast requiring payment for their work. Props need buying and depending upon the discussion of the motion picture they might be quite costly... VIEW ESSAY

1. Logline A story of a community living on Laguna de Bay where the main source of living is fishing and how the residents of this island is affected by progress, poverty, ignorance, neglect and the dark side of big businesses. 2. Protagonist One of the protagonists in the film is Mang Jacob. He was... VIEW ESSAY

In this political cartoon, “The Security Blanket” sketched by Eugene Payne (speaker), an Army veteran that later became an award-winning cartoonist, gave his thoughts over the Great Debate over gun control (subject) through this cartoon. The occasion surrounding this topic is the gun control in the US. This cartoon was directed towards the people (audience)... VIEW ESSAY