Who Is Abel In Beowulf?

A paper which considers whether the epic poem “Beowulf” is Christian or Pagan in nature.

“Beowulf” Beowulf is an epic tale that has been changed over time to try and express a christian moral. While this transformation over time has added a new variable to the plot, it is still impossible to try and erase the original pagan plot completely. It has become evident that the original epic was pagan and had no mention of the biblical references or the christian morality that it contains now.

Don't use plagiarized sources. Get your custom essay on
“ Who Is Abel In Beowulf? ”
Get custom paper
NEW! smart matching with writer

However, it is also evident that the original story dealt with the concept of a higher being or beings. The overriding christian view has many facets and deals with them all as a new way of proposing christianity into the theme of the story. The reason that Grendel becomes outraged is that the bard in the mead hall is singing a song that has to do with creation. This shows Grendel’s apparent disregard for God and he proceeds to go to the hall and capture men and eat them while they are asleep.

As we progress into the story, we learn that Grendel carries the curse of Cain with him. “He bore the curse of the seed of Cain/ Whereby God punished the grievous guilt of Abel’s murder.” Cain was the son of Adam and Eve and was the one who murdered Abel, his brother, out of a jealous rage for God’s favor to Abel. This shows us that Grendel had more than just a dislike for the men, the song was showing Grendel that his ancestor was looked upon as the bad person and was therefore the underlying concept for Grendel’s rage.

This was the constant reminder to Grendel of his evil past and thus his reasoning for his actions. We learn to see Grendel as a less than human being, but in actuality, he is a monster who has a degree of humanity in him and that is the reason that he is so hard for Beowulf to kill. He has the human emotion of pride which ultimately is the cause of his downfall. While this seems to be a major part of the story line, it can be removed and the story will only lose the background of Grendel’s evil side. This could have been where the real story of Grendel originally was. As with many of the classic medieval stories there is a sense of a higher being and fate is a major factor in Beowulf. ” Had fate but granted, born of my body/ An heir to follow me after I’m gone.” Fate is the factor that leads to the explanation of Beowulf’s death, and fate is also the reason that Beowulf cannot pass his sword and shield on to his nonexistent son. Fate plays a major role in the story and is related to the comitatus of the story. Beowulf’s life ends because of the curse on the dragon’s gold and causes the death of his family line. Although Beowulf tries to rationalize his greed for the gold as a way to better his people, his true feeling is that of gold and because of his past experiences and victories, he feels that he is immortal. He feels this way because he has lived through the toughest battles of all men and is thought to be the greatest warrior alive by all people. In conclusion, we are shown that without the christian morals throughout Beowulf, the story would seem incomplete, however, we will never know exactly what the original author lost over time as the christian morals were implanted into the story. It is also evident that because of the pagan occurrences in the story that the story was one of pagan origin and is now a story of christian origin. 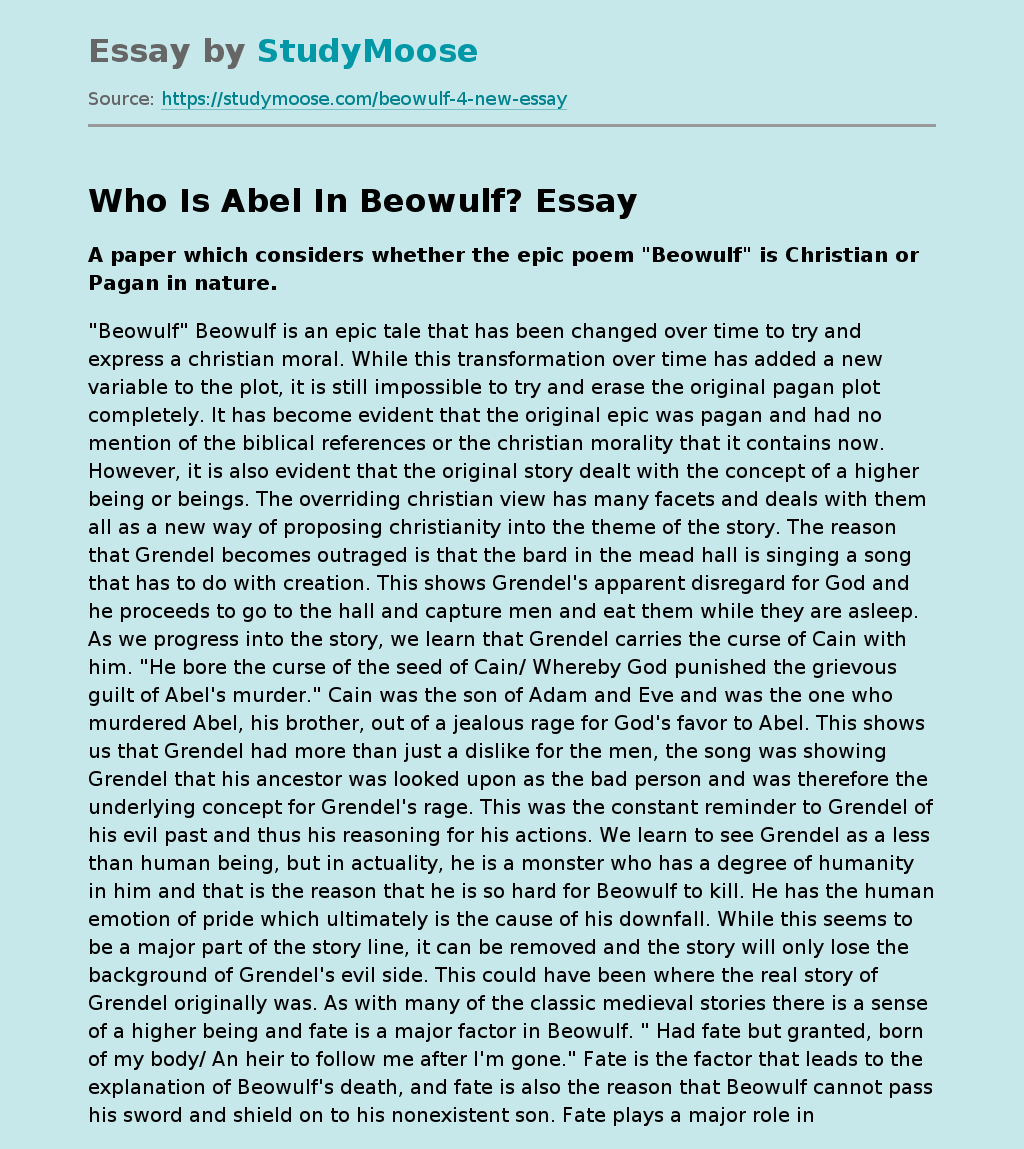