A biographical essay on Benjamin Franklin, illustrating some of his many talents and his political career.

Benjamin Franklin Benjamin Franklin was a remarkably talented man. He started his career as a simple printer apprentice, but went far beyond the printers shop. He developed products that were far beyond the time. The Franklin stove for example, for cold winter nights and bifocal lenses for reading. Franklin tracked storm paths to help understand the wicked weather endured by the colonies. His study of electricity made him most famous for he was known around the world as the inventor of the lightning rod.

Don't use plagiarized sources. Get your custom essay on
“ Benjamin Franklin’s Life and Decisions ”
Get custom paper
NEW! smart matching with writer

Not only was Ben Franklin helpful in developing ideas for better living, he was also a strong force in developing the new nation of America. Benjamin Franklin’s political views showed him to be a man who loved freedom and self-government. His views towards Britain gradually changed from favor to disfavor until he finally became a revolutionist at the age of 70.

But more than just his political views help in the formation of the United States. His common sense, his whit, and his ability to negotiate behind the scenes, all lent a hand in the formation of the new country across the sea. Franklin’s good humor and gift for compromise often helped prevent bitter disputes which could have stalled the formation of the new government. Interestingly, Ben Franklin, who was a chief participant in the battle for independence, “had a lot to lose by it.” (Wright 1986, page 204). He had a residence in London and was influential in England.

However, his love of liberty and his desire to promote the well being of Pennsylvania pushed him toward independence for the colonies. Franklin had to wrestle with his conscience over his own private affairs. Also, since he was well respected in England, he was “the Establishment man-even if he felt now a deep unease on the basic question: What was the authority of Parliament over the American colonies?” (Wright, page 205). At first Franklin wanted the colonies to be and independent free nation under the caring and protecting umbrella of the British Empire. “He had dream…of a great British Empire, gridding the globe, based upon a commonwealth of free nations, each with its own laws, its own government and freedoms, but bound together by compact with the Crown for mutual benefit, mutual defense, and the propagation of English freedoms.” (Schoenbrun 1976, page 5). As stated earlier, Franklin did not contemplate separation from Britain for he regarded Britain as “having the freest, best government in the world.” (Ketcham 1993,page3). Franklin proposed self-government for the American colonies. Historically, Ben Franklin was in favor of self-government. In fact, nearly forty years of service as a public official began when Franklin was elected for the Pennsylvania Assembly. At first, he wanted to get support for various civic causes but soon partisan politics held his undivided attention. Further, as the legislature strategist and writer for the weakly formed Quaker party, “he defended the powers of the elected representatives of the people. Franklin thus the virtues of self-government a generation before the Declaration of Independence.” (Ketcham, page 3). Further, Benjamin Franklin’s political views with regard to various British taxation upon the colonists show him leaning away from Britain. The Townshend Acts, Stamp Act, and other taxes and duties on colonial goods were opposed by Franklin. He wrote in connection with the American Stamp Acts, “The Sovereignty of the British Legislature out of Britain, I do not understand.” (Wright, page 207). Franklin felt that the colonies were capable of writing their own legislation. The colonies had their own parliaments and Franklin was confidant that these assemblies could properly legislate for the colony. In one of Franklin’s letters he writes that possibly an extreme case would be best. “Either Parliament could make all the laws for the colonies on it could make none, and he preferred to latter view.” (Aldrige 1965, page 195). The crisis brought about by the Stamp Act propelled Franklin into a new role as chief defender of American rights in Britain. At first, Franklin urged to colonists to be obedient to the act until it could be repealed. However, when Franklin beard of the violent protest against it in America, he became more opposed to it. “After the repeal of the Stamp Act, Franklin reaffirmed his love for the British Empire and his desire to see the union of mother country and colonies, but he also warned that the colonist wanted liberty and would stop at nothing to achieve it.” (Ketcham, page 3). Not only did Benjamin Franklin love liberty, he also had great skill as a diplomat. In this role, Franklin and his two grandsons sailed from France in 1776. “He achieved an amazing personal triumph and gained critical French aid for the Revolutionary War.” (Ketcham, page 4). Literary and scientific writers in Paris praised Franklin as a modern thinker. As the war raged on and France made a positive impact favoring the colonist, it became more and more impossible for Britain to give the war its full attention. Britain needed a way out and Franklin played a key role. “Franklin was appointed in 1781 a commissioner to negoiate the peace with Britain. (Ketcham 1994, page 1). Franklin was a very good negotiator as “the North Ministry pushed through Parliament two conciliatory bills that gave the Americans everything that Franklin had demanded in his peace negoiations.” (Fleming 1972, page 299). Franklin had common sense, whit, and skills that all helped bring favorable positions to the colonies against Britain. Finally, Benjamin Franklin portrays a man torn between his love of Britain and a desire for liberty for the people of the new world. His greatest hope was for Britain to be the great, caring mother country that protected a young free nation across the sea. He was each country benefiting the other. Of course, this could not happen so he made sure that the best for America would be insured through his efforts to bring France to the aid of the Colonies and to finally bring about a livable peace between Britain and America. 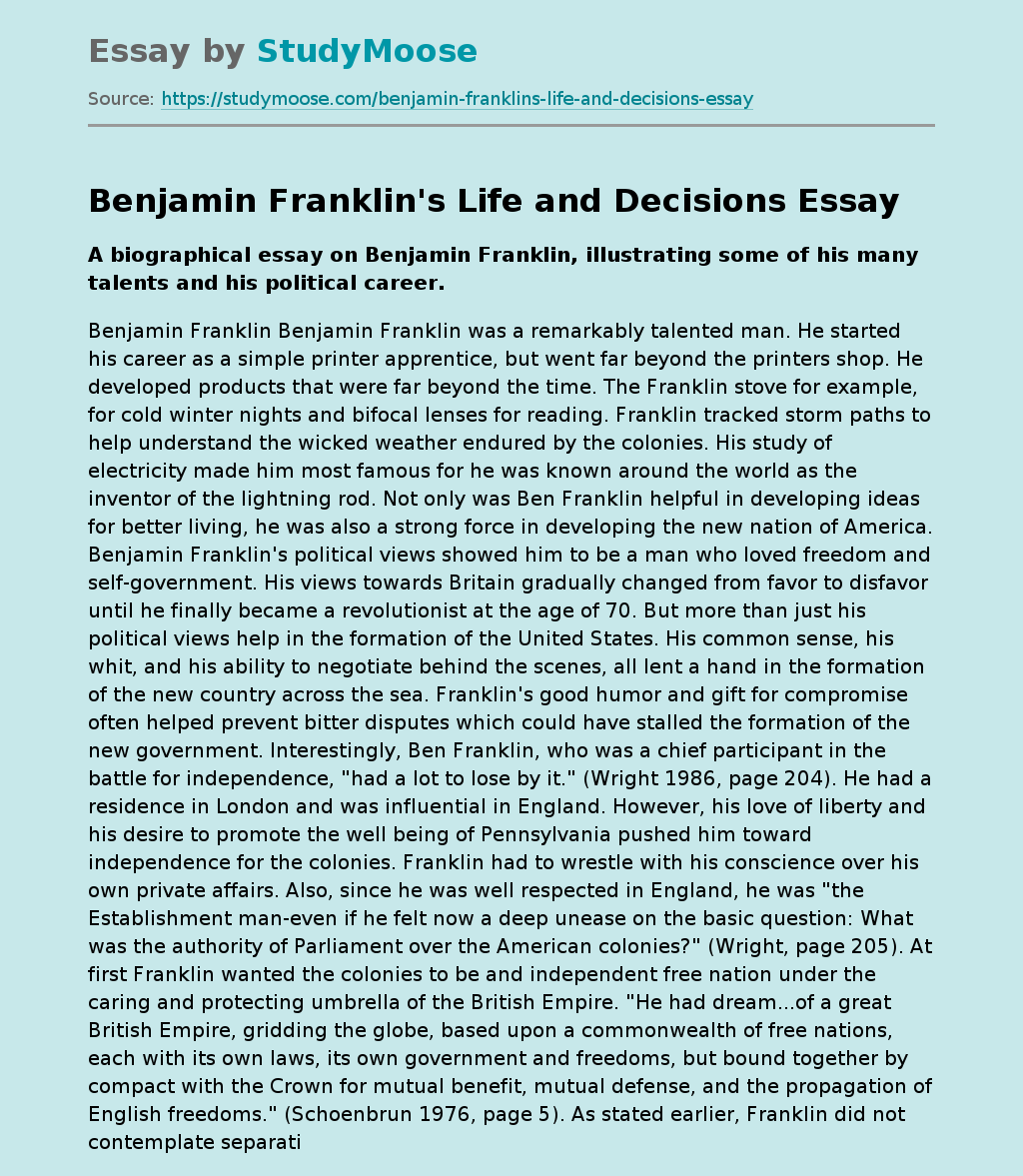