Most everyone did not like to go to school and learn as a child and some people have never wanted to try for education at all. Many people have asked themselves the question of whether or not to education and gaining knowledge is valuable. However there are some people who always loved to learn and expand their knowledge and Benjamin Franklin is one of those people. Ben demonstrates, through his autobiography, that he places value in learning and always sought to gain knowledge.

Don't use plagiarized sources. Get your custom essay on
“ Benjamin Franklin: Life and Career ”
Get custom paper
NEW! smart matching with writer

First off, Franklin loved to write and constantly strived to get better at it. He would spend all of his free time late at night and early morning to expand his writing skills. Ben would accomplish this through different methods such as writing something and then writing it again from memory, or looking at the things he liked about others writing and tried to incorporate it into his own. This is talked about in Franklin’s autobiography when he states “I thought the writing excellent and wished, if possible, to imitate it” (11).

This proves he enjoys the practice of writing because he is constantly trying to improve.

More so however, it shows his value in gaining skill and knowledge because he did it all the time. It is this attitude that led Ben to so much success as an individual and it is unfortunate that most don’t have it. Secondly, Benjamin also valued seeing others improve their knowledge. He loved to see others enjoying the same thing he did and he wanted to create a place or thing that would allow everyone who pleased to learn as much as possible.

Therefore in 1727, he created a club called Junto. As to the reason for the club, Franklin states, “I had form’d most of my ingenious acquaintance into a club of mutual improvement, which we called Junto” (Franklin 45). This proves that, since he does enjoy learning, he will also enjoy others learning with him. As well as the value in coming together for improvement, Franklin realized that they could benefit off each-others works. Therefore he calls it a mutual improvement club. Lastly, Franklin valued education especially of the youth. Benjamin Franklin loved school but he only went for one year as a child because his dad put him to work with his brother. This did not stop Franklin from learning however as proven from the previous points but it also stuck with him for the remainder of his life. Franklin saw that there was a need for education of the youth and so he began to think of ways to accomplish that. He thought no better way than to build a school; therefore, in 1744, Franklin founded the American Philosophical Society to be a place of learning for the youth in Philadelphia. He states his complaint of lack for education when Franklin says, “There were however, two things that I regretted, those being no provision for defense, nor for a compleat education of youth” (86).

If Franklin didn’t care for education he would not have talked about it in his autobiography. Furthermore, if he did not care about the youth being learned as was he, he would not have taken the effort to establish a school for them. Both of these things prove perfectly Franklins love for education and his desire for the youth to be learned in the world. In conclusion, it is clear, through Ben Franklin’s autobiography, that he placed value in learning and expanding his knowledge. This is made evident through his love for writing, his club Junto, and his college he established for youth. His writing was something he always wanted to improve and sought more knowledge to do so. His club was created out of his enjoyment of seeing others learn too but also the benefit of mutual improvement. Lastly, the school he created is a testament to not only his appreciation for youth education but also his pleasure of expanding his knowledge in a school setting.

All of these things show his wisdom in places so much value in expanding his knowledge; however, most people cannot relate to his excitement in learning. This might be because society doesn’t want to work hard and sometimes learning requires work, but it is not the work that is invested to get there that is fun, it is the result after you have achieved something that is. Therefore, you have been challenged to spend the rest of your life not being satisfied in what you do know, but thinking about all the things you could know. 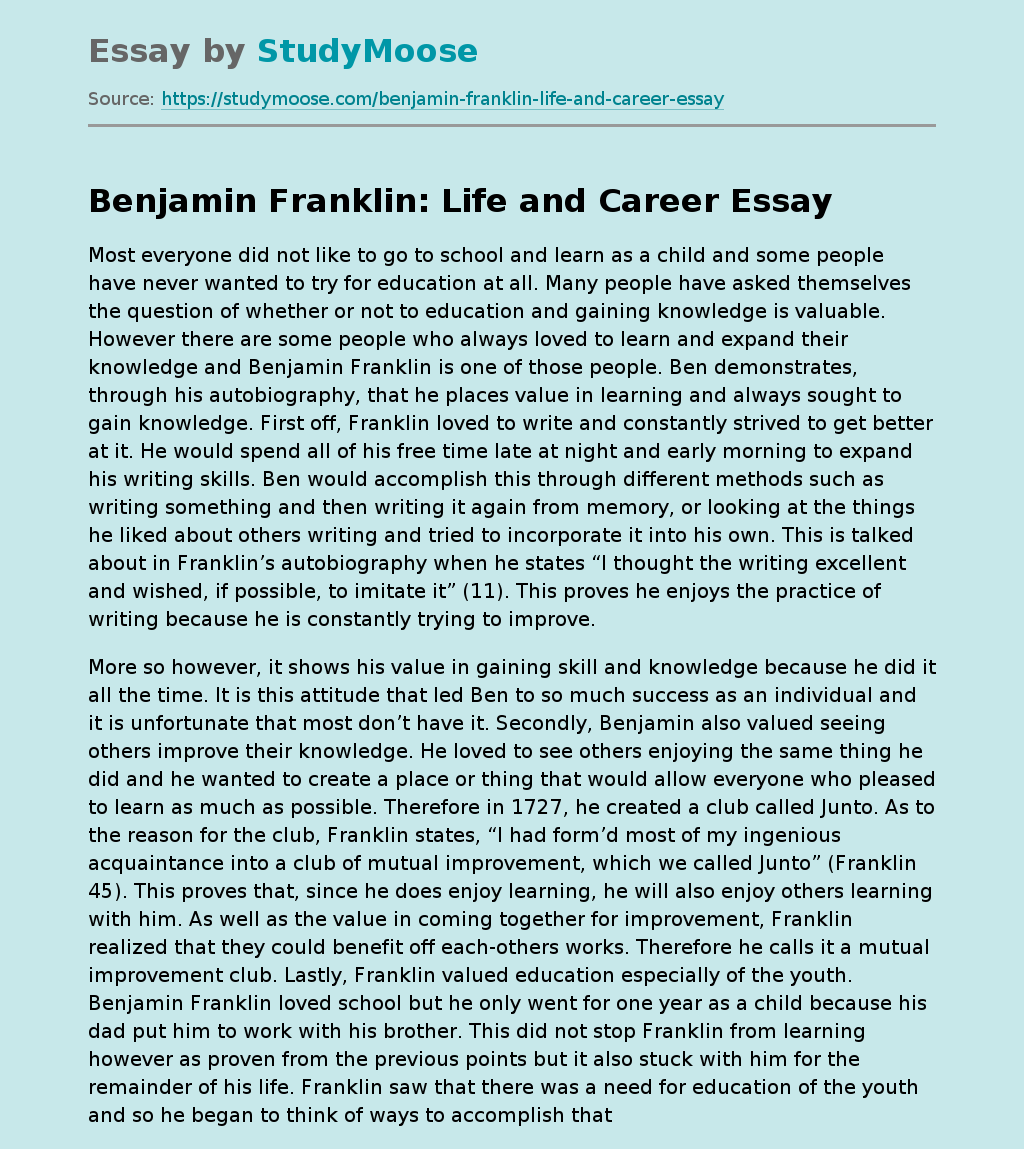