Being An Engineer Is More Than Just A Career Choice

Being an engineer is more than just a career choice it is a promise to uphold the code of ethics as well as make decisions for the future of engineering. A philosophy professor at Texas A&M, Charles Harris, wrote an article addressing the concerns of preventing incidents from occurring in the field of engineering. In his article, “Explaining Disasters: The Case for Preventive Ethics”, Harris states there are three different reasons for the failure that occurs in the career of engineering: bad engineering, bad management, and bad ethics.

Don't use plagiarized sources. Get your custom essay on
“ Being An Engineer Is More Than Just A Career Choice ”
Get custom paper
NEW! smart matching with writer

Writers William Broad, Malcolm Gladwell, and S.P. Nichols and W.F. Weldon back up Harris’s claim in their articles, addressing the reasoning for why these mistakes tend to keep occurring. The claims made by all these writers illustrate the importance of being an engineer as more than just a job. They also addressed that reliability does not only fall on what the task is but every part of the process.

Engineering failures sometimes occur due to the “False confidence” in the manual labor of engineering itself. Often when working on something like their previous projects, the confidence of the engineers takes over and the procedures are rushed and not perfected. Or when working on something that is new, the idea of failure may not become prevalent until it occurs. To illustrate his belief, William Broad used the example of the 1940 collapse of Tacoma Narrows Bridge. In this instance, this bridge collapsed and shattered due to strong winds. This failure demonstrates that engineers become ambitious and start to push the limits on what they feel comfortable with.

The determination of the work of an engineer is to make sure what they have created is the best version of itself, not to get the job done. Safety is also a huge factor in the engineering process. If something isn’t safe it is not the best version of what it could be. There are many ethics in which an engineer lives by and to rush the project or finish it with no regard for safety eliminates these ethics. The mentality of an engineer is to “have a direct and vital impact on the quality of life for all people”. There are many ways in which the failures and disasters of a project fall on the blame of the engineers, however there multiple areas of engineering that have a part in causing failure.

If you were to take a closer look, it is clear to see the other areas that fall weak when failure becomes apparent. One of these areas includes the higher in command or management position. The people in these roles have a responsibility to make sure the engineers do their job properly and to sign off on anything the engineers accomplish. When these managers decide to slack in their jobs or go against the recommendations of their employees’ failures are likely to occur. You could relate this to movies where the evil villain is a corrupt business owner or boss and the hero must expose them to save the town. Except often there is no hero and it is harder to tell if your boss is an evil villain or just terrible at their job. We cannot go around throwing blame at every companies’ management for mistakes made. No matter how easy it is to blame our bosses. Charles Harris addresses the managerial problem with the Challenger disaster by stating, “Improper management was also a contributing cause of the disaster. If Thiokol managers had been more responsive to Boisjoly’s early warnings “might well have averted the disaster.” The managers for the challenger decided to go against what the engineers said to finish the job sooner. This caused a large disaster to occur. Weak management often leads to undependably from the entire company of engineers.

One of the first and most important reasons for failures on any level of an engineering company often occurs with ethics that become corrupted. The ethics of an engineer are tested when accepting any job or challenge. Engineers must be aware of what they are doing and how it affects the communities around them. S.P. Nichols and W.F. Weldon argue how ethics are important to engineering by stating, “For engineers, engineering ethics is not a topic separate from engineering, it is part of the essence of engineering as it pertains to the professional responsibilities that the engineer has with society.” Ethics are very important for making decisions in every field of work, let alone engineering. Ethical failures occur when an engineer does something knowing it conflicts with the code of ethics. The failure does not have to be one in which something is broken or destroyed but one that is meant to cause harm or used for purposes that break the ethical values of a community. This kind of failure occurs when one person decides to create something for the wrong reasons. Ethics is in every aspect of engineering, good or bad. It is a base that keeps a corporation together.

Engineering, management, and ethics all play a factor in failures. You may find times when only one of these failures occurs, but it is rare to find a failure in which the other factors were not accountable. Within the career of engineering, it is important to be aware of everything you are doing and how it affects the future of engineering and how it affects the people around you. Not only do these factors lead to disaster but that can also prevent failures. These failures can lead to solutions and progressions. To progress, we need to be able to understand why something failed instead of just how it failed and blaming it on the easiest answer. Each one of these factors of failure interconnects with one another and ultimately lead to a solution or to failure. It is our job as engineers to find more solutions than failures.

Being An Engineer Is More Than Just A Career Choice. (2019, Dec 12). Retrieved from https://studymoose.com/being-an-engineer-is-more-than-just-a-career-choice-it-is-example-essay 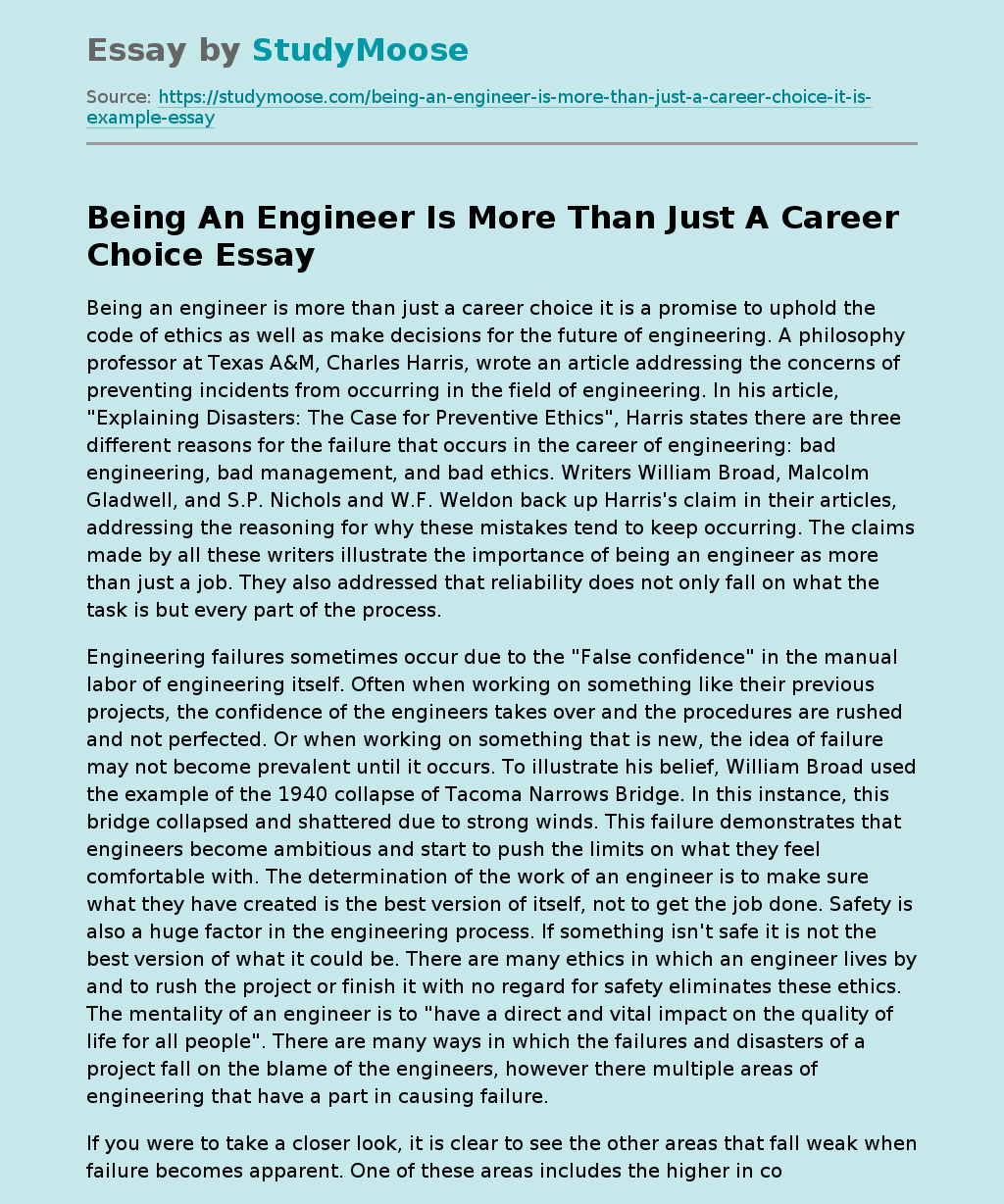