Films are more than just entertainment they can make statements

Films are more than just entertainment, they can make statements about the real world. Children of Men was released in 2006 and was directed by Alfonso Cuar?n. The opening sequence is an important scene as it sets up what the film is going to be and how it will present itself to the audience. The film is about a dystopia where babies have not been born for almost 20 years but then a woman, who has become pregnant, shows up and needs to get to safety for her child to be born.

Don't use plagiarized sources. Get your custom essay on
“ Films are more than just entertainment they can make statements ”
Get custom paper
NEW! smart matching with writer

The movie makes many commentaries about real-world issues such as terrorism, immigration and nationalism, which is a result of the movie being made post 9/11. The event changes the world with new threats looming. The terror attacks show different sides, the unity of everyone after the attacks and the selfishness of the terrorists who carry out those attacks. Children of Men mirrors the real world issue showing humans being both selfish and unifying.

It questions what humans will do during a crisis, thinking only of oneself or helping each other. The Children of Men opening sequence sets up the debate by showing humans being selfish and united, in different scenarios, through mise-en-scene and narrative with cinematography explicitly and implicitly showing the audience.

In the first seconds of the opening scene, the crowd watching the news is in the foreground of the shot, taking up the majority of the screen. Even though they are shown in a crowd together, they are separate from one another, mourning on their own, not together. It is the same when Theo, the main character, walks into his office. Everyone is in their own cubical crying by themselves. The extras are in the foreground in the middle of the screen multiple times to emphasize their selfishness. They do not try to comfort each other and mourn together as they just keep to themselves. Props also help show the selfishness of the society in the film. There are multiple anti-immigration signs saying to put fellow British citizens before immigrants. They show them in the background and foreground. The British do not care about immigrants as they want to keep their resources to themselves as the rest of the world suffers. This shows the selfishness of a nation instead of an individual. The mise-en-scene visually shows the world of film. The opening sequence mainly shows heavily policed areas with an emphasis on a selfish nation. There is little unity shown by the mise-en-scene. As the film continues and shows more of the world, more unity and less selfishness appears through mise-en-scene.

The narrative shows explicitly the theme of human nature, both the unity and the selfishness. A story in the plot is the mass banning and segregation of immigrants. While the rest of the world suffers, Britain closes its borders and does not allow anyone who is not British to stay in the country. It is a result of nationalism as it is about putting one’s country before anything else and the film shows both selfishness and unity as a result of it. On one hand it can be seen as selfish as nationalists will always put their country’s needs above everything else. As shown in the film, if a refugee or immigrant needs help, they will ignore them. A prime example of this is during the travelling shot of Theo walking past the immigrants in the cages. The camera stops following Theo and pans to an old woman pleading with the guard who ignores her. This is selfish as the woman looks desperate and the guard does nothing. On the other hand, it can be seen as uniting the citizens with a common goal on both sides. Though not in the opening sequence, the Fishes have the goal of fighting against the nationalist government which united the members. Nationalism is abundant in the film and is shown as a uniting and a selfish factor.

Another part of the narrative that shows selfishness and unity of humans is the death of Diego. The cinematography focuses closely on it as the news story takes up the majority of time in the opening sequence. The news story is shown when Theo walks into the coffee shop and is shown multiple times on the extras at their computer screens. Diego is the youngest person alive in the dystopian where there has not been a birth for 18 years. He is treated like a celebrity in the film and is killed by a fan who does not get his autograph. The video in the film shows him getting swarmed by crowds of people and his angry reactions. His story shows the selfishness of people wanting to get attention, especially from someone famous, and the extreme result of it. This also mirrors what happens to celebrities in real life. Some fans selfishly put their own needs before the celebrity’s and forget that even people like Diego are human. When he dies, the crowd unites and kills the murderer, as bad as that is. Similarly, to the paragraph above, this event unites not just Britain but the whole world. He symbolizes when the world had hope of a future because of the lack of births. His death made many mourn for him, though it did not bring them together fully. Even though they were not completely united in their mourning, they still had him in common and were connected as everyone’s emotions were similarly sad. Though sadly he died, Diego’s death was something people were able to bond over.

Children of Men reflects societal issues as a dystopian film. The film questions whether humans, during emergency situations, will be selfish or will unite. In the opening sequence, they show this through cinematography with mise-en-scene and the narrative stories of Britain’s nationalism and Diego, the youngest person that was alive. It mirrors the after-effects of 9/11 as, not just the US, but many countries united through the crisis. Strangers helped strangers and emergency officers risked their lives going through the rubble of the Twin Towers, looking for survivors. Not everything was positive though. Xenophobia was apparent in the country as Muslims were discriminated against which lead to hate crimes against them. The selfishness of humans was seen as there was no sympathy for Muslims who had no involvement in the attack. In the real-world people have been shown to care for one another but also to go against each other just like in the film.

Films are more than just entertainment they can make statements. (2019, Nov 15). Retrieved from https://studymoose.com/films-are-more-than-just-entertainment-they-can-make-statements-example-essay 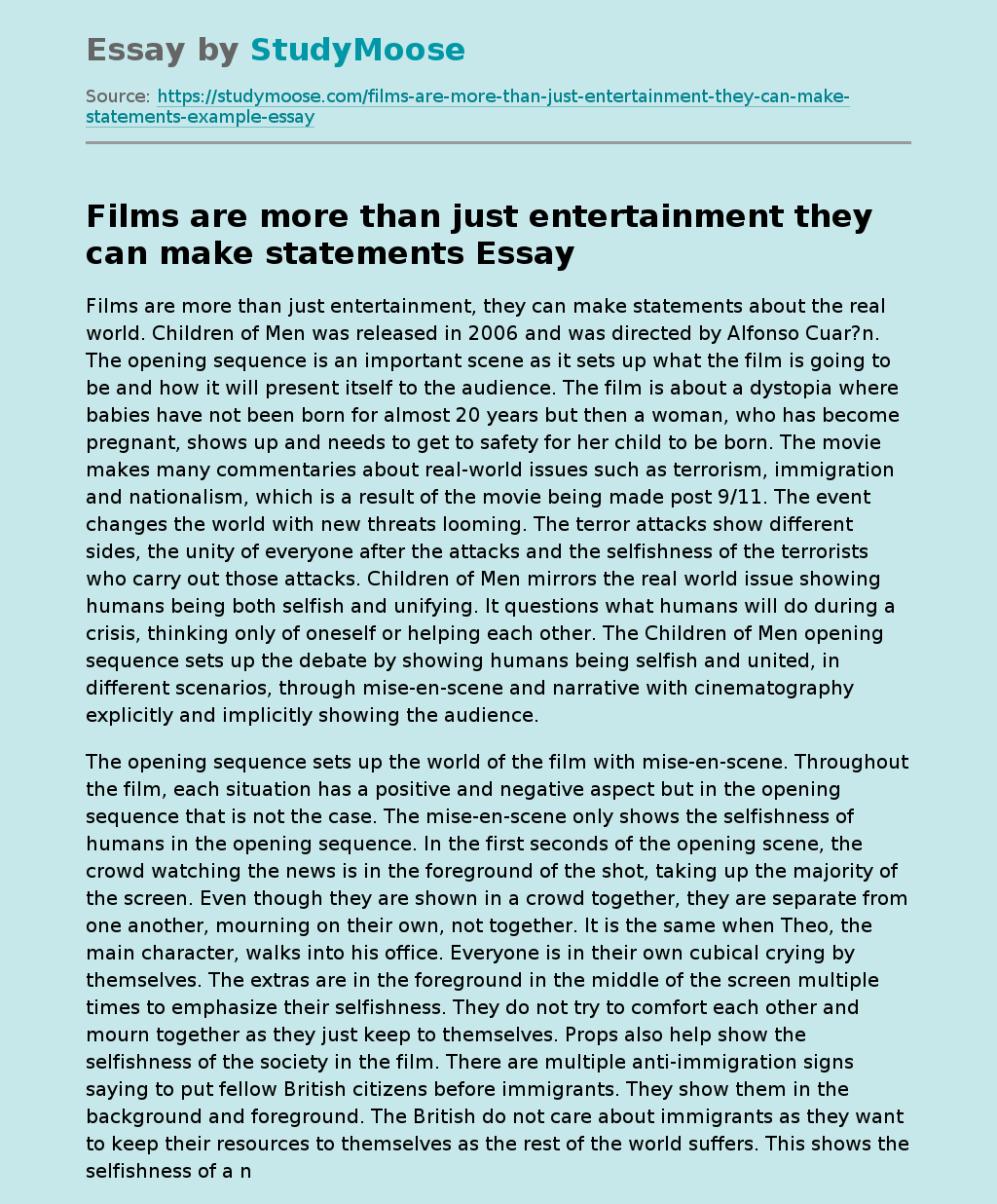