“Notes of a Native Son” is a first person narrative about James Baldwin who lived with his family in Harlem during a difficult time for the equal rights movement in America. Racism through Baldwin’s experience shows its potential to feed off of itself in a vicious cycle, with one person’s hate leading to someone else’s. He has first hand experience with this through his father, a man who, while considered free, felt the pressures of racism throughout his life.

Don't use plagiarized sources. Get your custom essay on
“ Baldwin’s Notes of a Native Son Book Review ”
Get custom paper
NEW! smart matching with writer

The hate Baldwin’s father had towards white people was a reflection of the current state of equal rights in the country. Baldwin finally understands his father’s feelings when he moves to New Jersey and sees racism for himself. He eventually comes full circle to realize the true problem with racism, but he is too late to reconcile with his father. The story begins with a nineteen-year-old James Baldwin at his father’s funeral. Looking back on the time he spent with his father, Baldwin realizes that he very rarely spoke to his father and had almost no relationship with him.

Baldwin credits this partially to the fact that both him and his father were stubborn and prideful, but also maintains his father “could be chilling in the pulpit and indescribably cruel in his personal life and he was certainly the most bitter man I have ever met; yet it must be said that there was something else to him, buried in him, which lent him his tremendous power and, even, a rather crushing charm” (Baldwin 588).

This bitterness is a natural reaction to the racial tensions during Baldwin’s father’s life. Baldwin remembers his father as an angry man who distrusted all white people because he was among the first generations of free men and, during his time, racism was very prevalent in the United States. His father had been ill a long time and ended up dying of tuberculosis. However, he was also sick with paranoia; this “disease of his mind allowed the disease of his body to destroy him” (Baldwin 590). Baldwin actually comments that throughout his whole life, he never remembers a time where any of his brothers or sisters was actually happy to see their father. His father always warned his children not to trust white people, and often warned that some of them may be nice from time to time, but that none of them were to be trusted. However, as an innocent child, Baldwin wanted to believe that white people were not all inherently evil like his father said. This hope was embodied by one of Baldwin’s teachers who helped him and his family for a time when ’s father got laid off from his job. However as Baldwin grows older, he begins to see why his father was so bitter toward white people.

He moves to New Jersey where he realizes, to his surprise, that even in northern states, to be a negro meant that “one was never looked at but was simply at the mercy of the reflexes of the color of one’s skin caused in other people”(592). While living in New Jersey, he feels everyone trying to “eject” him (592); he is fired from his job and re-hired three times in one year. On his last night in New Jersey, he goes to Trenton with a friend for drinks and a movie. When they went to the “American Diner” they were refused service because the diner “didn’t serve negroes” (593). Soon after, he was refused service again and nearly assaulted a waitress. This represents the moment where he truly understands his father’s anger. He now feels upset and has a wish too reconcile with his father, but obviously no longer has the opportunity to do so.

Baldwin reminisces on a time when he went to see his father during the illness, and the last time before he died. He had put off seeing him for so long because he did not want to see his father in the state he was in. He had hated his father for the man he once was but seeing who he had become only made Baldwin feel sorry for him. He realizes that he shouldn’t have hated his father for how he felt and wishes he were there to talk to him. Baldwin understands that hatred not only hurts the people being hated, it also destroys the man who hates, and real change will only happen if we can separate ourselves from this hate on both sides.

Baldwin sees many different sides of racism throughout his life; from a child who disagrees with his father’s hatred of white people, to an adult that also caught the “illness” that his father had. These experiences eventually bring him to the realization of the underlying problem of racism. Baldwin sees the sickness that the country suffers from does not stem solely from one side spreading hate, but from both sides equally making it that way. Although whites spread racism and hate, blacks responded in a similar fashion, which only made the situation worse. When one group hates another, that hatred not only hurts the victims, but also destroys those who hate. “Hatred, which could destroy so much, never failed to destroy the man who hated and this was an immutable law” (603). The only hope to abolish racism and the hatred that comes along with it is for both sides to try and understand each other to overcome the hate. I agree with Baldwin when he says, “it now had been laid to my charge to keep my own heart free of hatred and despair” (604). It is up to us to separate ourselves from the hate so all can understand and improve the lives of others instead of destroying them.

Baldwin's Notes of a Native Son Book Review. (2016, May 07). Retrieved from https://studymoose.com/baldwins-notes-of-a-native-son-book-review-essay 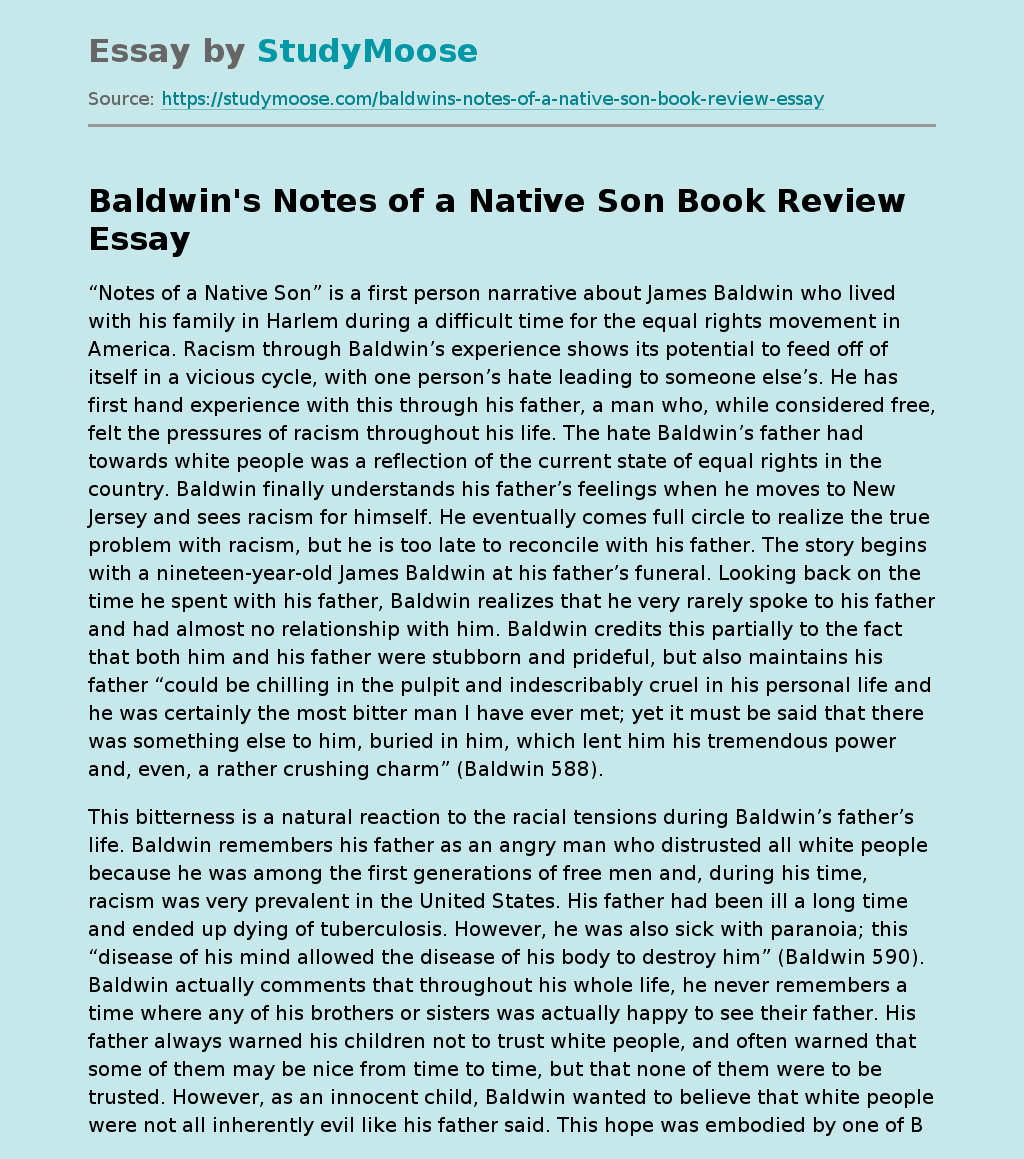