Balance of Threat and the Ottoman-German Alliance of 1914

Balance of Threat and the Ottoman-German Alliance of 1914

Toward the outbreak of the Great War the Ottomans were facing multiple threats. The Entente forces constituted major threats for the Empire, especially Russia. Besides there were mounting internal threats of the Armenians, the Anatolian Greeks, the Arabs.

British and French were steadily and aggressively colonizing the Ottoman territories in the Middle East and North Africa. France was involved with Syria and Lebanon in addition to North African territories of the Empire. Additionally Britain and France had borrowed loans to Ottomans, and they were constantly intervening to protect their interests, they said.

Don't use plagiarized sources. Get your custom essay on
“ Balance of Threat and the Ottoman-German Alliance of 1914 ”
Get custom paper
NEW! smart matching with writer

The central concern, however, for the Ottomans was to stop the continuous disintegration of the Empire along the ethnic lines. The threat perception was high and continuous. The question the Ottomans were searching for an answer as Europe plunged into war in July 1914 between two blocks was which alliance was the least threatening for the ottoman territorial integrity. The Ottomans did not have other options but choose between the central alliance and triple entente.

The Entente is a great source of threat

Among these the Entente was a great source of threat. While the English and French were expanding into the Ottoman territories in the Middle East and North Africa the Russians believed to have ambitions to take over the very heart of the empire, Istanbul, and thereby control the straits. Only a few decades earlier at the end of 1877-1878 Ottoman-Russian war the Russian troops had reached a few miles outskirts of Istanbul.

So the balance of threat was obviously greater as regard to Russia. In Djemal Pasa’s words: “Russians regarded themselves as natural heirs to Constantinapole” p.69 Thus, the main motivation of the empire was to end its diplomatic isolation and balance the Russians’ territorial ambitions.

Germany did not have territorial ambitions in the Middle Eastern territories of the empire nor in the straits and the Caucasus while building main railroads spreading the whole of empire. Besides, Germans were organizing the Ottoman army, and public opinion and the opinion of the elite sided with Germany.
Alliance with the Entente meant concessions, to the Russians in the straits and the Caucasus, to the British in the Middle East, and France in North Africa. For Djmal Pasha the Ottoman Empire had settled its differences with the British and the French before the outbreak of the war.

Thus, the least threatening and with biggest balancing power against the powers that had designs over Ottoman territories appeared Germany. Ottomans could join in the group of states that threatened the empire the most, or form an alliance with the other side, Germany and Austrian-Hungarian Empire.

If “alliances are against, and only derivatively for, someone or something” (Liska 1962, Nations in Alliance:12) this is the case for the Ottoman-German alliance of 1914 which was clearly ‘against someone,’ namely the Russians that posed proximate and imminent threat to the empire.

For Walt’s theory of balance of threat geographic proximity if states matters. “States that are nearby pose greater threat than those that are far away.” 1987: 23. This is one of the basis of Ottomans’ threat assessment. In public and official circles ‘proximate threat’ appeared to be the Russians who had been expanding at the expense of the Ottomans as Eastern provinces of Ardahan, Kars and Batum were annexed at the end of 1887-1888 war. Russia was not only a pressurizing neighbor in the East and in the Black Sea but also in the Balkans where the Russians had occupied Edirne in 1887 and established a strong zone of influence among the newly independent Balkan states as their protector.

As Walt states, “weak states are … likely to be especially sensitive to proximate power” (p. 28-29.) the Ottomans were very concerned about Russia as a powerful and threatening state.

Another element of threat for Walt is “offensive power” which refers to the “ability to threaten sovereignty or territorial integrity of another state at an acceptable cost”. P. 24. For Walt the immediate threat with offensive power may ‘create strong incentive for others to balance.’ P.24. As to the offensive powers of adversaries of the Ottoman state Russia stood out unrivaled. Its ambitions to control the straits and occupy Istanbul were no secret. The Russian advances into Anatolia from the East had long started. The influence of Russia on the disenchanted Armenians was at its peak as the Russians were supporting their ‘national cause.’ With the Russian support an Armenian revolt expected to be imminent.

So Russia among all others appeared the most imminent threat to the very existence of the state, its independence and sovereignty as well as territorial integrity.
Thus the Ottoman search for ‘balancing’ against the Russians was overwhelming. The question for the Ottomans was whether this was possible by joining in the Triple Entente or the Central Powers-Dual Entente. So the question was whether the attempt to avert the threat would take the form of bandwagoning or balancing.

Bandwagoning is usually conceptualized with references to ‘small states’ that bandwagon the threatening state/s to ensure survival. While the Ottoman Empire even by 1914 could not be regarded as a ‘small state,’ it would certainly be described as a ‘weak state,’ and if “the weaker the state, the more likely it is to banwagon rather than balance” as asserted by Walt. 87: P.29 this was what the “weak” Ottoman state tried to do. They sought bandwagoning in the initial period of their efforts to form an alliance toward a major European war. But the British, and later France, could not be persuaded. The ruling elite apparently wanted to align with the ‘source of the threat.’

Bandwagoning, taken as ‘alignment with the source of danger” was what the Ottomans seriously considered, even sought in the early stages of their search for an alliance. The source of danger then was the Entente Powers all of which had territorial and economic designs over the Ottomans. Yet among the entente powers the primary source of threat was Russia.

To counter the power and threat a state bandwagon the source of threat. As such the ottomans search for allies was first geared to bandwagoining. Yet within the bandwagoning a balancing act particularly toward Russia was apparent. When the Ottomans initially sought an alliance with the French and the British the Ottomans were not only ‘bandwagoning’ into an alliance that threatened the empire but also seeking an act of ‘balancing’ within the alliance against the most threatening one, Russia. So the Ottomans expected the balancing act of their bandwagoning the Entente powers to check the threat of one state within the alliance with the ambitions of the other, ie.

British and French versus Russia, somehow similar to the policies of these states against Russia in the Creamian war of 1853-1856. So the Ottoman bandwagoning into the Triple Entente was to include an act of balancing within as Britain and France expected to act as a balancer vis-a-vis Russia. Djmal Pasha, one of the Unionist trio in charge, in his talks to the French underlined that they wanted to be part of their alliance and sought protection against the Russians. In his memoirs he says; “we were determined to cultivate the best relations, primarily with the French, but also with the English. (P. 99. See memories, p.97 … for the attempt for a franco-english alliance.)

The idea of the possibility of ‘balancing’

It seems that the Ottomans were of the opinion that an intra-alliance negotiation to balance the Russians within the Triple Entente was possible. This indicates that the Ottomans entertained the idea of the possibility of ‘balancing’ within the alliance that included the greatest source of threat, banwagoning as an act of balancing.

Walt argues that if “a state is believed to be unalterably aggressive, other states are unlikely to bandwagon” p.26. because a vulnerable state is likely to be a victim even if it allied. Then how can we explain the Ottomans’ early attempt to ally with the Entente powers. The attempts of the Ottoman Empire to form an alliance with either Britain or France in 1914 may be regarded as an outright bandwagoning behavior.

Yet, given the grave threat perception especially toward one of the states in the Entente, namely Russia, the Ottomans wanted to try a third way: balancing through bandwagoning. That is by joining in the Entente, the source of threat, the Ottomans were expecting to balance Russia with Britain and France from within.

“States will also be tempted to bandwagon when allies are simply unavailable.”p. 30. In the Ottoman case the Ottomans’ first preference was to bandwagon, join in the Entente that included its greatest source of threat, Russia, in addition to lesser threats of British and French. Yet these states, source of greater or lesser threat to the Ottoman Empire, rejected the Ottoman quest to join. So Ottomans faced a rejection for their willingness to bandwagon with the sources of threats to the empire.

At the end, the threatened state seeks a balancing act by forming an alliance with a state which is less likely to pose a threat and more likely to go against the source of threat (or common enemy). Walt, 1987.22-26. This explains the final decision of the empire to align itself with Central Powers vis-à-vis the Triple Entente that included the most threatening Russia and lesser threatening states of Britain and France.

All these considered, by concluding an alliance with Central Powers the Ottomans were balancing against an external threat. They sought to deter the Entente powers, especially the Russians, from destabilizing and dismembering the Ottoman Empire. Germany appeared distant and disinterested in the Ottoman territories in North Africa and the Middle East, thus considered as ‘safe ally’ as well as a balancing actor. The balance of threat dictated at the end the Ottomans to form an alliance with the Central Powers. 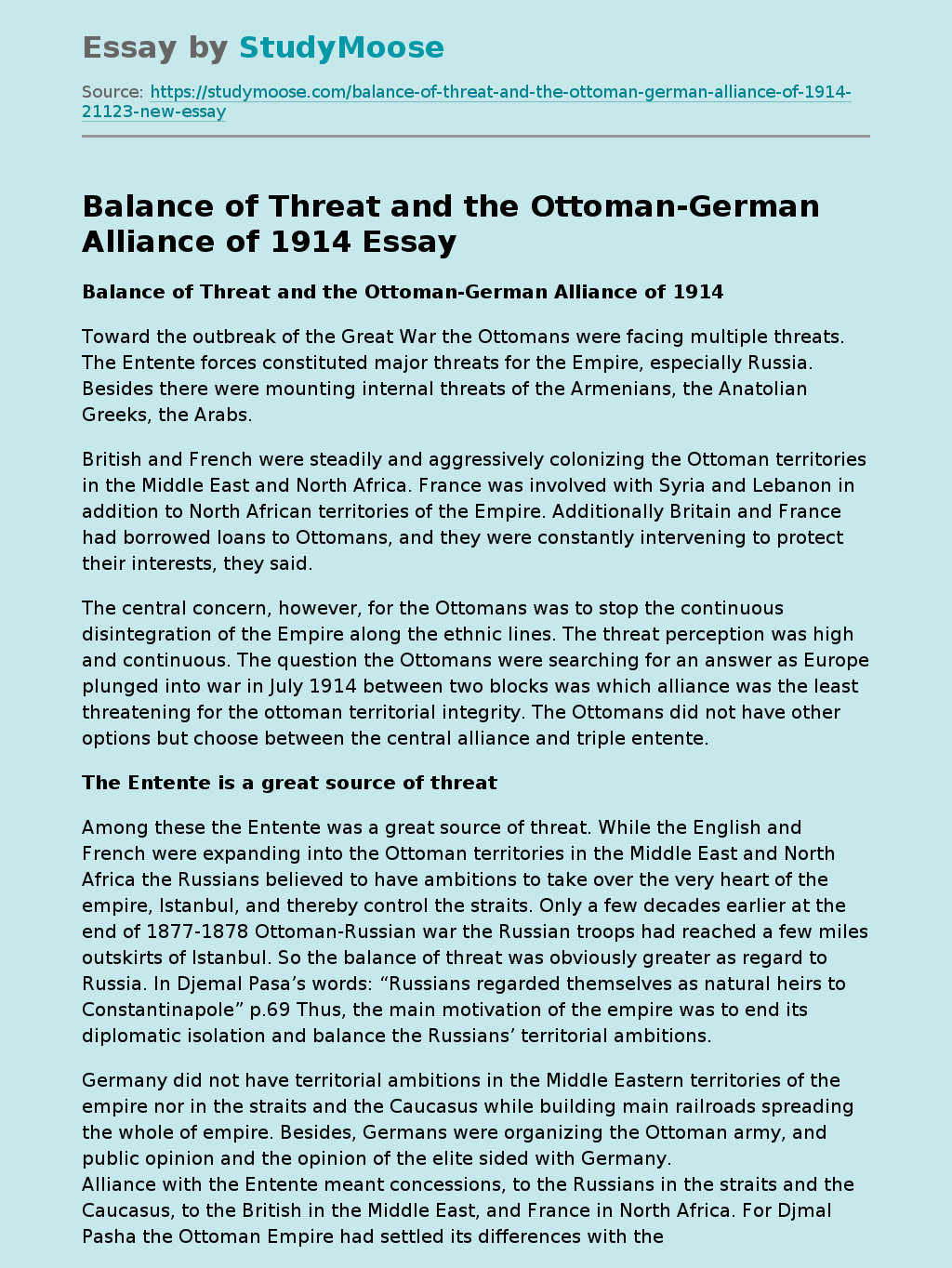