The story “Back for Christmas” was written by a highly skilled modern English writer John Collier (3 May 1901 – 6 April 1980). His stories may be broadly classified as fantasies, but are really sui generis. They feature an acerbic wit and are usually ironic or dark in tone. His distinction is a grotesque with a twist in the end. This author can stands a picture vivid before the eyes of the reader. The title of the story under analysis is short but it excites many associations.

Don't use plagiarized sources. Get your custom essay on
“ Back for Christmas ”
Get custom paper
NEW! smart matching with writer

On the one hand the text can be connected with a beautiful family holiday, but on the other hand the title sounds mysterious – why BACK for Christmas; in this case anyhow the word “Christmas” itself already presupposes the idea of cold winter or something bad. The text under the analysis belongs to the psychological type as it is concerned mainly with the mental and emotional lives of the characters. It makes me think of the described problem not once.

The subject-matter of the story is a cold-blooded murder committed by a provincial doctor who ironically fails to get rid of his bossy wife.

The author tries to show the reader different approaches of men and women to the idea of life. The story describes a difficult period in the relations between husband and wife. The problem, which is touched upon in the text, is the dominance of one of the spouses in the family. The author creates a well-plotted story which is true to life and a realistic representation of spouses’ relations.

Compositionally the text falls into the following parts: exposition, narration, denouement, climax, ending. Exposition is revealed that Doctor Carpenter is invited to deliver a course of lectures in the US. At their farewell party Mrs.Carpenter promises the guests to bring her husband back for Christmas ignoring his slight doubt about that. The author makes it quite clear that Hermione Carpenter has always been exceedingly responsible for all arrangements in her husband’s life and career as well as the trip. Narration describes the murder carefully executed by the Doctor, who pretends to have found a gold chain in the drain, which he uses as a decoy. After hitting his wife with a lead pipe and making sure she is dead, he goes on to dispose of the body.

Denouement takes place when the first obstacle to the Doctor’s plan arises when he finds out that the water has already been turned off by Mrs. Carpenter, which causes him to go to the cellar. Then there is a knock on the door, which scares him and brings about despair in the success of the affair. But receiving no response, the neighbours decide to come by later and leave. Climax is when Mr. Carpenter’s endeavours to hide the body in the hole dug beforehand in the cellar, which his wife believed to be a preparation for a new wine bin. The story ends with the Doctor arriving in America to find a letter waiting for him, which turns out to be a receipt for repairs of the wine bin and will inevitably lead to the discovery of his wife’s body. The idea of the text can be formulated like this to show the dominance of one of the spouses and what it can lead. In my opinion this theme is actual, but a little exaggerated. The story is presented from the point of view of a first-person observer.

The author presents the characters directly and indirectly. The main character is Doctor Carpenter. According to direct method of characterization we learn that he was a clever, but very strange; it seems to me he is very secretive, and as we see further he is very cruel. The flat character of the story is doctor’s wife – Mrs. Carpenter. She plas dominating role in the family, she is very good housewife, carrying and coherent. She keeps always everything in perfect way. I feel most sympathy for her. The text “Back for Christmas” is written in a style of fiction. In the beginning of the text we can see the Carpenters; living room that was filled with the close friends who had come to say «last-minute farewell» – the author used this epithet to show us that their friends would be missing him very much. On the contrary with his wife doctor Carpenter wasn’t sure he would come in time, he thought something could spoil his plans. But his wife «beaming at them» said he would be back in England for Christmas.

The metaphor is used to reassure everybody to make them believe in this. So, the farewells began. Mrs. Carpenter tried her best to make all the arrangements on the high level and to prove it the author used such epithet as: «fluting of compliments» and «marvelous arrangements». Carpenters were going to drive to Southampton that evening and would embark the following day. They have chosen this kind of transport for more comfortable travelling without any bustle; and to emphasize it the author the used the repetition “No trains, no bustle, no last minute worries”. So doctor Carpenter has contracted for lecture only three months and certainly he would be a great success in America. His wife Hermione has just tagged a long him to have some entertainments to see the big cities skyscrapers. Then the author uses repetitions «No extensions. No wonderful post» that show us that his infirmary needs him. After the farewell dinner the maids washed up all the plates, come in to say goodbye and were in time to catch the afternoon bus to Devizes. The given story produced a great impression on me. It is full of ironical and sad moments.

Back for Christmas. (2016, May 08). Retrieved from https://studymoose.com/back-for-christmas-essay 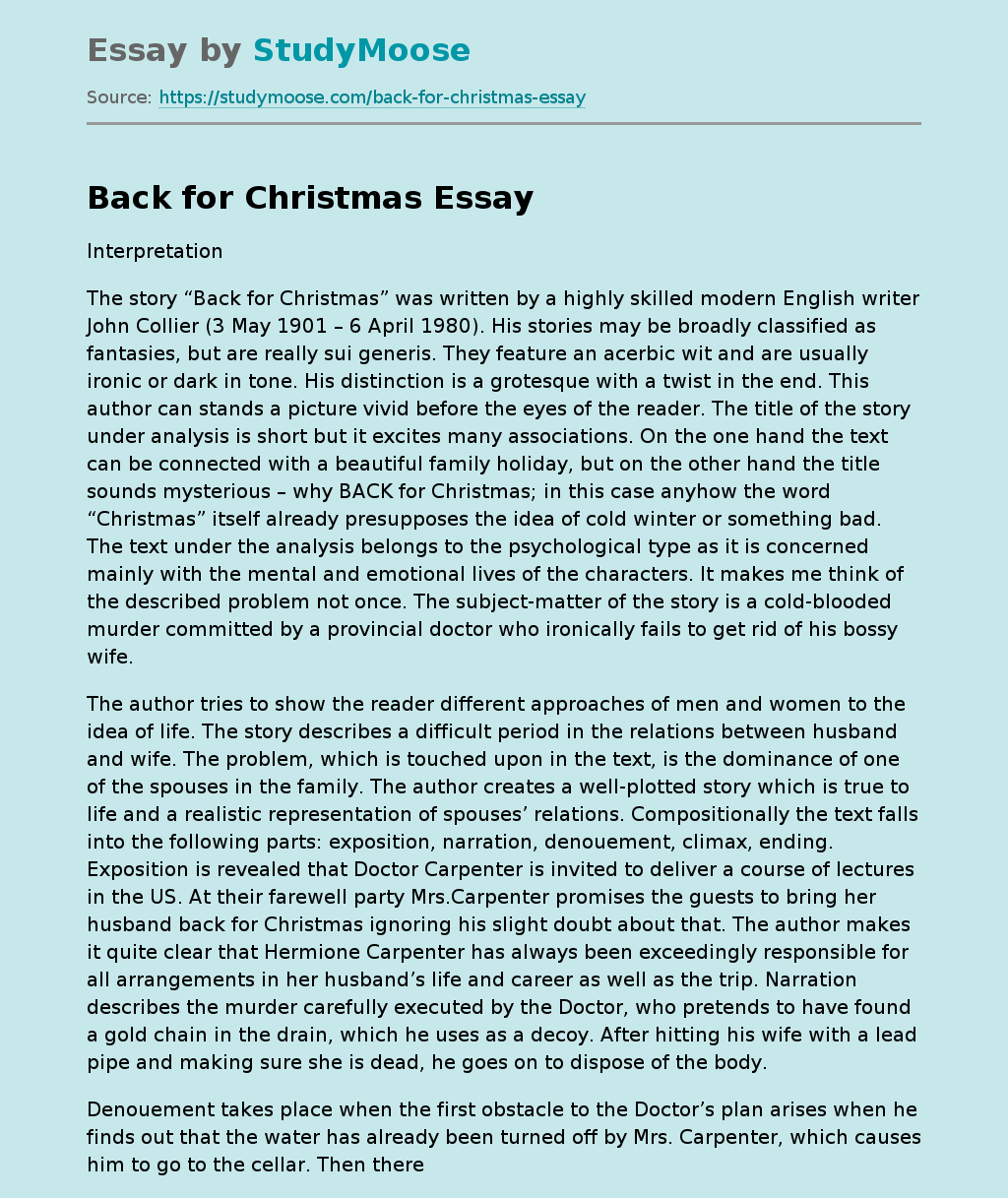