“Roman Fever” is a very dynamic story, were things aren’t necessarily what they appear. The characters have two faces: the ones they show each other and the ones evident to the reader through the narration. The setting, the title, and the dialogue all develop the plot. Hypocrisy and deceit are present throughout the whole story, and they greatly drive the plot. Wharton uses irony, an omniscient narrator, and symbolism to convey the theme of passion and how it can poison the mind, leading to destructive actions.

Don't use plagiarized sources. Get your custom essay on
“ Passion and Betrayal in Roman Fever Short Story ”
Get custom paper
NEW! smart matching with writer

The way the author chose to narrate the story is vital to how it is perceived. The story is in a third person omniscient point of view, which greatly develops the characterization of Grace and Alida. Various times throughout the story, one of the women says something to the other and afterward that narrator will reveal to the reader what she is really thinking. This helps show the reader the hypocrisy and deception in their words.

One example of this is when the women are talking about roman fever and its dangers. In the midst of this, the narrator tells us that Alida thinks she “must make one more effort not to hate her” (Wharton 115). This exposes to the reader directly for the first time that there are some underlying issues and unfinished business between these characters that they are avoiding.

Another factor that contributes to the progress of the plot are the numerous symbols that Wharton chose to employ. One of the most noticeable of these is the setting.

Rome is a city that almost always evokes images of passion and romance. Within this setting, the climate and time changes directly parallel the gradual changes in the women’s relationship. This is especially evident when Alida first reveals that she wrote the letter that Grace had though she received from Delphin many years ago. After this information is brought to light, the two women stand “for a minute staring at each other in the last golden light” (117). The last few moments of sun are representative of the last moments of politeness between these two women. After “the clear heaven overhead was emptied of all it’s gold” (118), all of the women’s passionate secrets start spilling out. Grace divulges that she answered to the letter, and that Delphin came to meet her that night. This revelation completely changes Alida’s idea of her relationship with her late husband.

The ruins that are described, the forum and the Colosseum, also mirror what happened between these two women. These structures, once representatives of Rome’s magnificence, are now reduced to a “great accumulated wreckage of passion and splendor” (114). The same goes for the friendship between these women. Love and passion came between them, causing great betrayal on both sides. This has diminished their friendship until it is really no longer there, replaced by lies and treachery. Right before Grace reveals her greatest secret, that Barbara was really Delphin’s daughter, she is “looking away from [Slade] toward the dusky secret mass of the Coliseums” (119). The “secret mass” of ruins is a direct description of their friendship, which was destroyed because of jealousy and lies. Another important symbol in the sort story is the title. “Roman Fever” has a double meaning; it was an outburst of malaria that plagued Rome in the past, but it also represents the feverish passion present in the women’s story.

It is a symbol for Alida’s jealousy of Grace, and how it has simmered inside her for all of these years. Both of the women are victims of roman fever in the sense that they both fell into dangerous games of love, passion, and betrayal. This betrayal is also alluded to in the story about Aunt Harriet. The story goes that Aunt Harriet “sent her little sister to the Forum after sunset to gather a night blooming flower…but she really sent her because they were in love with the same man” (115). The sister died. It is possible that Alida was inspired by this story to write the fateful letter to Grace. An element that greatly contributes to the overall tone of the story is irony. Many lines throughout the narrative all culminate to the final line of the story: “I had Barbara”(119). Here, Grace is revealing that her daughter Barbara is also daughter of Alida’s husband Delphin. This line alone exposes the irony in many other parts of the story. This is apparent when Alida is thinking about Barbara Ansley. “Babs… had more edge.

Funny where she got it, with those two nullities as parents” (112). Irony is also present when Alida tells Grace that she was “wondering how two such exemplary characters as you [Grace] and Horace had managed to produce anything quite so dynamic?” (114). These lines are very ironic because the reader later learns that Horace Ansley had nothing to do with the birth of Barbara. Through the use of irony, symbols, and an all-knowing narrator, Edith Wharton presents passion, betrayal, and deceit between two women. It is repeatedly conveyed in the story that things are not always what they appear on the surface, it takes a second look to realize the underlying sentiments that are occurring. This is present both in the infinite symbols in the story as well as the passion that drove Grace and Alida’s friendship to ruin. Even though they had known each other for a long time, “these two ladies visualized each other, each through the wrong end of her little telescope”(113). Because of the destruction that their betrayals had caused when they were young women, these two people who had been “intimate since childhood” (112) discover that they truly know nothing about the other at all. 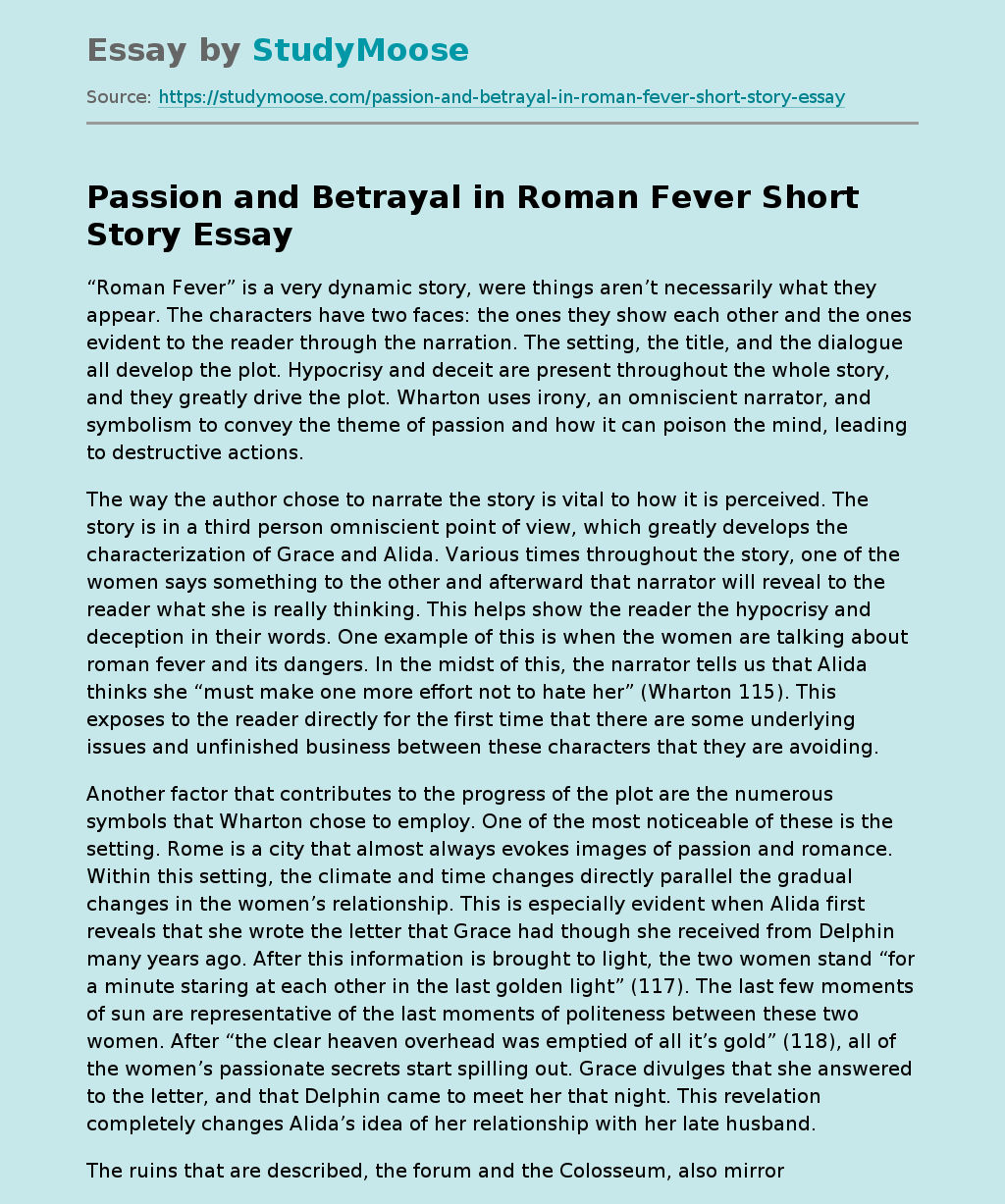