Imagine a world where you can get in your car without the worry of driving alongside drunks and teenagers. The once fictional dream of riding a driverless car is now becoming a reality, with many large companies including Mercedes-Benz, Toyota, BMW, Audi, and Google, currently investing in the development of this contraption. What is a driverless (or autonomous) car? It is an automobile run by an autopilot that allows passengers to travel safely and quickly to their destination with minimal to no human control.

The Institute of Electrical and Electronics Engineers (IEEE) predicts that by the year 2040, our roads will be populated with autonomous vehicles, with up to 75% of all cars being driverless (Newcomb, 2012). As human civilization advances technologically on a daily basis, we are becoming less dependent on people and more dependent on robots, which many view as positive. Self-driving cars are a step in the right direction for society, and ought to become available to the public as soon as possible for a more efficient and secure driving experience.

The primary concern with transportation is safety; hence the most obvious and largest benefit to the replacement of regular cars with self-driving cars is the decrease in traffic collisions. “Ninety percent of our road accidents are related to bad driving behavior; driving recklessly and speeding under the influence of alcohol, changing lanes without signaling, driving on the hard shoulder and passing through red lights.” -Lt Gen Dahi Khalfan Commander in chief of the Dubai Police (Olarte, 2011).

The majority of car crashes are caused by human errors, and if this proposition is implemented, the number of fatalities due to car accidents per year will dramatically plummet. In 2012, a Google driverless car had driven over 300,000 miles, with only two accidents being reported, both of which had been a human’s fault (Ermson, 2012). Autonomous cars will have quicker reflexes than humans, make more reliable judgments and will not commit silly mistakes such as texting whilst driving. As a collateral for reducing accidents, this innovation could theoretically also save the government trillions of dollars each year.

A major issue for drivers today is congestion. Picture Sheikh Zayed road at 6 AM on a weekday. When a car brakes, the driver behind takes a couple of seconds to react and stop. Now this goes on and on, causing heavy traffic and wasting everyone’s irreplaceable time. Autonomous cars are expected to have a completely revamped traffic system, one lacking traffic lights and stop signs. Vehicles will be capable of communicating with each other by transferring crucial information via sensors, allowing them to predict their expected positions, minimizing the spaces between them. With the small distances between cars and the non-stop flow of traffic, a substantial amount of time will be saved during trips and congestion will be considerably alleviated. Another burden to be lifted off of society’s shoulders is the expense of owning a car. A new public transport system that operates entirely on driverless cars could be put into service.

Hence possessing your own personal autonomous vehicle will be unnecessary and costly because the time wasted in a parking spot could be utilized to transport other individuals, and a subscription to a public transport system is a much cheaper alternative. Autonomous vehicles will also save owners insurance money because as the rate of incidents drops, vehicle insurance will be viewed as optional rather than obligatory. In addition, this innovation will save the costumer fuel money by reducing the frequency of braking and acceleration, which has an adverse effect on fuel consumption. As expected with a very technologically advanced piece of machinery, when autonomous cars first hit the market they will not be affordable for everyone. But given enough time, the prices will go down and self-driving cars will slowly but surely replace regular cars. A while after the integration of this technology into our daily lives, there will be an inevitable loss of driving related jobs. But as the saying goes, when one door closes another opens, and these robots aren’t going to build themselves.

The immediate effect will undoubtedly lead to a loss of jobs, but with the success of the production, in the long term new jobs will appear and consequently completely fresh industries as well. With this huge development in electronics, admittedly garage mechanics and taxi drivers might struggle with income, but software engineers and programmers are going to be in demand more than ever, and thus economic balance is restored. Now I know what you’re thinking, isn’t that unjust to those who are unable of attaining academic degrees? At first, maybe. But I believe that given enough time, the criteria required for intelligence and information based jobs will become less constricted. This is because the advances in software programming and other similar areas of expertise will make related jobs uncomplicated. There are countless examples of such occurrences in history, a notable one being the industrial revolution. Just like today, people back then were also worried about losing their occupations to machinery. But the introduction of steam engines and the replacement of physical labor with machine work pushed farmers towards other professions that were themselves created by the new technology, and thus there was an unprecedented blossoming in the economy.

All the benefits I have mentioned, the unparalleled road safety, the smooth and quick ride, the low expenses and many more outweigh the very scarce negatives. Self-driving cars will revolutionize the auto-industry and will be a turning point in our lives. Soon enough driver licenses will cease to exist, and elderly people, children, and handicapped persons will no longer struggle with land transportation. The Earth Institute of Columbia University predicts a cutback in the number of cars on the road in the US by a factor of 10 (Burns, Jordan & Scarborough, 2013). Four states in the US have already authorized the use of autonomous vehicles (Kelly, 2012), and for the good of all, I believe the rest of the world should follow suit. “What can we do to create shared prosperity? The answer is not to try to slow down technology. Instead of racing against the machine, we need to learn to race with the machine ” (Brynjolfsson, 2013). 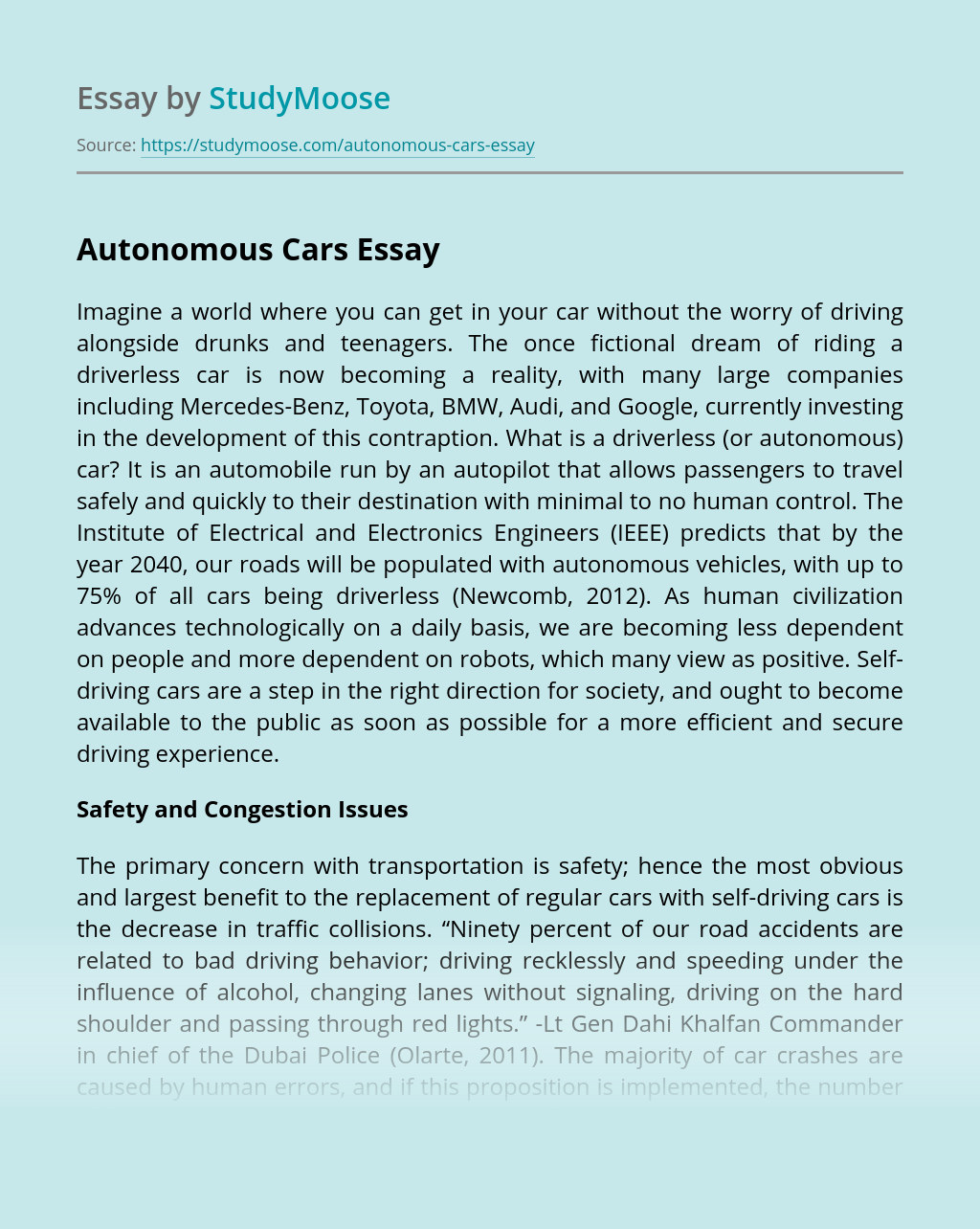