Audience in 'A Streetcar Named Desire'

Williams creates dramatic tension in ‘A Streetcar Named Desire’ through the interactions between the important characters in the play, such as the conflict between Blanche and Stanley, and their contrasting styles of communication. The first instance of this occurs in the second scene. Blanche is bathing, whilst Stanley questions Stella about the loss of Belle Reve, referring to the so-called “Napoleonic code”. As an audience, we sense the tension being created when he says “And I don’t like to be swindled.

Don't use plagiarized sources. Get your custom essay on
“ Audience in ‘A Streetcar Named Desire’ ”
Get custom paper
NEW! smart matching with writer

” We see Stanley’s aggressive nature and his increasing anger towards Blanche through his actions and words, “Open your eyes to this stuff!”

When Stella cries, “Don’t be such an idiot, Stanley”, he becomes even more enraged, “[he hurls the furs to the daybed]” and “[he kicks the trunk]”. Tension is created here and, as an audience, we sense the drama that is about to come. The atmosphere is tense, and as Blanche comes out of the bathroom antithetically “[airily]”, the contrast between Stanley and Blanche becomes apparent and the unease is developed further.

Although Williams successfully achieves dramatic tension in the play, he does not use Acts, but divides the play into eleven scenes, perhaps because he was unable to sustain dramatic tension for the length of a conventional Act. However, as with all of the scenes in the play, this scene leads to a natural, dramatic climax. Blanche talks casually with Stanley, who’s increasing fury is illustrated in the stage direction, “[with a smouldering look]”.

Finally, the tension is released by Stanley, “[booming] Now let’s cut the re-bop!” This dramatic cry and instantaneous discharge of tension shocks the audience, but Blanche appears unmoved, speaking “[lightly]”, “My but you have an impressive judicial air” and acting “[playfully]” towards Stanley. Her contrasting manner further infuriates him, again resulting in a build up of tension. However, as Stanley appreciates the tragic loss of Belle Reve,”[becoming somewhat sheepish]”, he allows the conversation and the audience’s attention to be diverted away from himself, and instead to Stella’s pregnancy, diffusing the tension.

William’s persistent use of detailed stage directions in ‘A Streetcar Named Desire’ implies that the visual settings of the play are very important. Williams uses this attention to detail to create an atmosphere that heightens the impact of the drama, and emphasises the tension created within each scene. This is demonstrated in the third scene, where a Van Gogh painting is evoked in the stage directions, which relates to William’s description of the men as “[as course and direct and powerful as the primary colours]”, enhancing the atmosphere of rife masculinity that contrasts with Blanche’s feminine presence and pale pastels thus accentuating the subsequent dramatic tension that is created.

The same applies to the settings surrounding Blanche; for example, in Scene Nine the “[blind Mexican woman]” is a portent of death, the memory of which terrorizes Blanche, and in Scene Ten imagined “[lurid reflections]” and “[grotesque and menacing]” shadows that Blanche sees reflect her madness and fear, enhancing the tension of the scene.

Coupled with William’s use of visual effects, sound effects are used to create dramatic tension. The Varsouviana, polka music, plays regularly throughout the play. It is heard only by Blanche and is used to illustrate Blanche’s feelings of guilt towards Allan’s suicide, and plays whenever she is particularly disturbed, creating tension. Her response is to drink heavily, in an attempt to overcome the sound. The music continues to grow louder and so the tension is amplified. Only when she is drunk enough, does the music subside with the final shot, and a dramatic climax is reached. For all the drama created by the music, Blanche seems to have accepted this part of her torture, as demonstrated when she states in a matter-of-fact manner “there now, the shot! It always stops after that!” as though the reliability of the music’s regularity is a comfort to her.

In Scenes Four, Six and Ten, Williams introduces a roaring locomotive at dramatic moments: Blanche’s criticism of Stanley, her account of Allan’s death and before Stanley rapes her. The result of which is developing tension, to be released in the climax of the scene. The locomotive also has connotations of fate, in that, like the streetcar, it can only travel on one line, and in one direction, to one destination. Also, the locomotive’s headlight illustrates Blanche’s fear of exposure; she crouches and shuts her ears whenever it approaches, in an attempt to shield herself from the harsh reality, also creating tension.

Audience in 'A Streetcar Named Desire'. (2016, Jun 19). Retrieved from http://studymoose.com/audience-in-a-streetcar-named-desire-essay 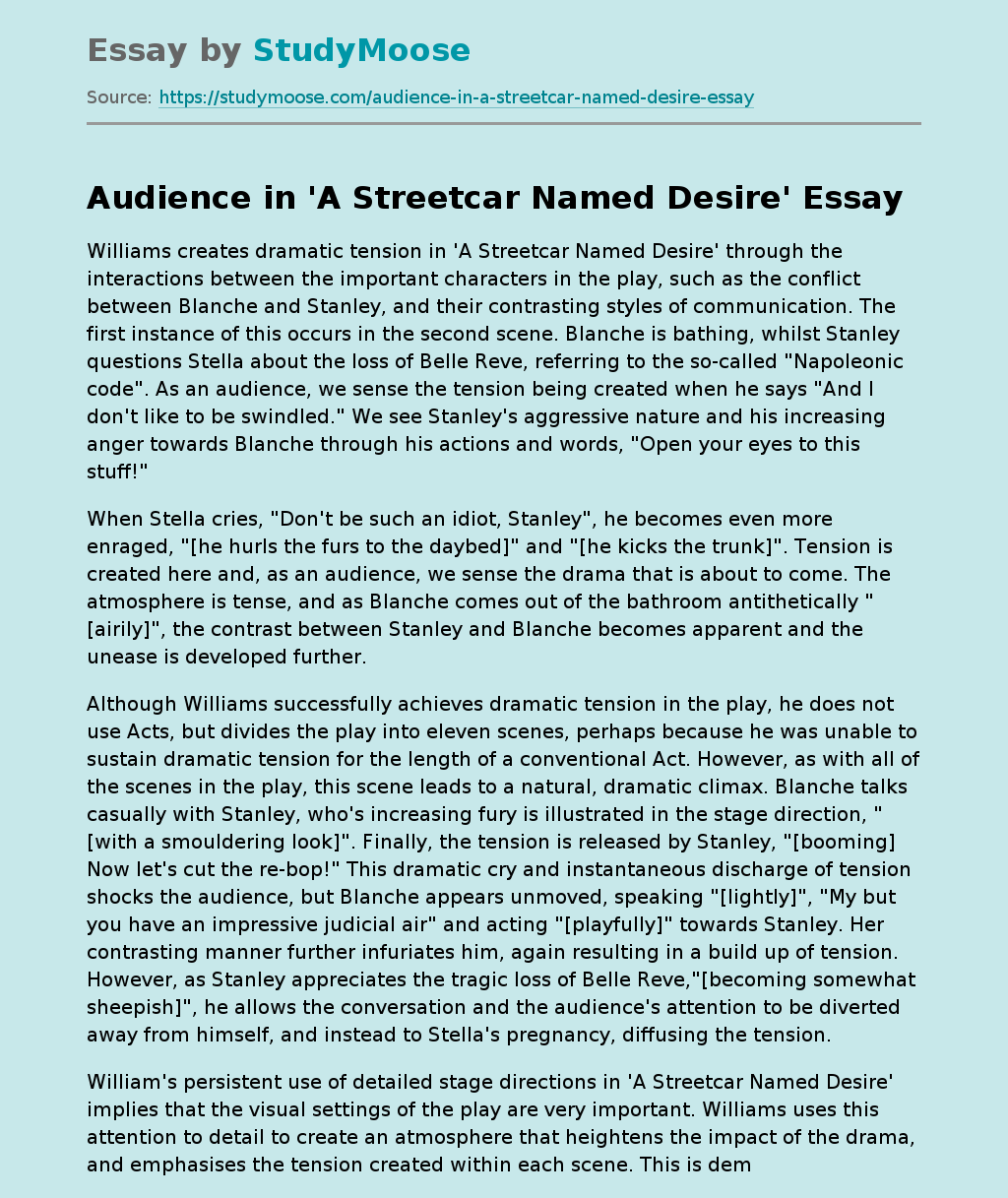