April and The Thief and The Dogs

‘The Thief and The Dogs’ by Naguib Mahfouz and ‘Broken April’ by Ismail Kadare are two world literature novels that share some similarities and differences between them. This essay will compare and contrast the first chapter of both novels in a conventionally organized ‘point by point’ structure. The similarities include themes of the novels, some literary features such as imagery and characterization on the characters. The differences of the two novels include literary features such as narrative point of view and pathetic fallow or sympathetic background, and time of and place of the novels.

Don't use plagiarized sources. Get your custom essay on
“ April and The Thief and The Dogs ”
Get custom paper
NEW! smart matching with writer

The time and place of both novels seem to be set at different times and places. ‘The Thief and The Dogs’ was set in the mid or late twentieth century while ‘Broken April’ was set in the early twentieth century. Also the two novels are set in completely different continents, ‘The Thief and The Dogs’ took place in Egypt, Africa whereas ‘Broken April’ took place in Albania, Europe.

Since the two novels are set in completely two different locations, it is seen within the text that the culture of the two countries are also different.

‘The Thief and The Dogs’ being set in Egypt where the city Cairo contains “great mosques and, beyond them, the Citadel… ” (p153) suggests that the story takes place in an Islamic and Muslim world. It is also possible that there could a relationship between a Muslim leader whom is known as the Sheikh and the main character Said. On the other hand, ‘Broken April’ is all about the life on the high plateaus of Albania which is where a certain culture exists.

The culture of the high plateau and more particularly, the ‘Kanun’ which is the “code of customary law” (p10) and dictates the rituals surrounding the killing and its aftermath such as behavior and clothing during certain events. So with two different time, places and cultures, we get two novels with a distinct difference of setting but they share a similarity of theme. Throughout chapter one of both novels, the themes seems to be consistent and similar. Themes such as revenge, fate, the influence of the past on the present, and the law are shown in both novels.

Revenge can be considered to be a common theme among novels and it definitely is in this case. Revenge drives and motivates the two main characters in the two novels; Said and Gjorg to do what they are obliged to do. In ‘The Thief and the Dogs’, Said Mahran is seeking revenge on those whom have betrayed him and possibly the people whom caused him to spend four years in prison. On the other hand, Gjorg Berisha in ‘Broken April’ is also seeking revenge not because of betrayal but because of the death of his brother; he wants to get revenge on Zef whom killed his brother Mehill.

After he kills Zef he receives a 24 hour “bessa” or truce and another 30 day “bessa”. It is possible that the family of Zef would want to get revenge on Gjorg for killing him and therefore creating a cycle or revenge and bloodshed. Fate is another theme that appears in both novels. In ‘The Thief and The Dogs’, Said is looking for the “right moment” where “[he will] strike like Fate” (p150) on those who have betrayed Said.

In ‘Broken April’, the day that Gjorg killed Zef seemed to be “a fateful day in his life” (p8) and after the ‘passers-by’ was told “to complete whatever he had not been able to do” (p11) which was to turn Zef’s body up and put his gun beside the dead body, he thought that it “was still his fateful day” (p11) since everything was going according to his plan. Another theme that is persistent throughout chapter one of both novels is the theme of the influence of the past on the present.

In ‘The Thief and the Dogs’, Said mesmerizes the past which he thought were “glorious days – how real they were, no one knows – the feast, love parenthood, and crime”(p153). If he could, he wants to go back to the “glorious days” where he had everything that he ever wanted which also drives and motivates his actions. In ‘Broken April’, if it wasn’t for the killing of Gjorg’s brother Mehill, Gorge wouldn’t have to kill Zef and he wouldn’t be in a position where he is in danger after the 30 days of “bessa”. The last theme that the two novels share is the theme of law.

Said has been subject to the official system of Egyptian law and he was to obey the law if he wants to keep his relationship of his daughter Sana. In ‘Broken April’, it is a different law that Gjorg and the other people follow which is the Kanun and it is equivalent to a government law. Everyone obeys the Kanun no matter how difficult it is to obey because if they don’t, there are consequences that won’t do them any good. In chapter one of both novels, all of the themes are the same therefore the themes are something that they both have in common just like some of the literary features used in both novels.

‘The Thief and the Dogs’ and ‘Broken April’ share some literary features such as imagery. Both novels share animal imagery. Chapter one of ‘The Thief and the Dogs’ is dominated by animal imagery and the imagery are used in both positive and negative connotations. Said’s former wife and friend are possible candidates for the dogs in the title and it showed when Said asks Ilish, “have you forgotten, Ilish, how you used to rub against my leg like a dog? ” (p152) Said also refers to them as “cowering like mice” (p153), “you black beetle” (p154), “You mangy dogs!

” (p156) and “You snake” (p157). These are all of the ways that animal imagery is used in a negative way. However, positive animal imagery is used when Said’s qualities are brought up and he thinks that he is “a man who can dive like a fish, fly like a hawk, scale walls like a rat… ” (p152). In ‘Broken April’, some animal imagery is used. Gjorg’s life is described as the life of a “bat” (p19) because he is living under the “bessa”; he can only safely come out at night since he is in possible danger during daylight.

During the funeral, Gjorg describes “the braid on the seams of their tight trousers” as “poisonous black snakes ready to strike” (p15). ‘The Thief and the Dogs’ and ‘Broken April’ also have contrasts in the literary features used such as pathetic fallow or sympathetic background and narrative point of view. There is no pathetic fallacy in ‘The Thief and the Dogs’ but there are in ‘Broken April’. In the beginning of the chapter, there is a sympathetic background to the action and the feelings of Gjorg. His feelings are conveyed by the “desolate” grating of the pebbles which is transferred to “the sense of desolation inside him” (p7).

His actions are witness by the personified wild pomegranates as they are the “motionless witness” (p8). Both novels are written in different point of views. ‘Broken April’ is written in third person omniscient which allows some insight to the character’s thoughts and feelings. “The Thief and the Dogs” is also written in third person but there are several areas where there are interior monologues which are italicized. The interior monologues allow us to read the real-life thoughts of Said during certain events. Characterization throughout chapter one in both novels is very similar.

In both novels, the main characters and so called protagonists are introduced in third person and they are presented with a problem that they must face. In ‘The Thief and the Dogs’ it’s the betrayal and how to get revenge on the Nabawiyya and Ilish. In ‘Broken April’ it’s killing Zef when he has doubts in doing so. Both characters have the same resolution for their conflicts which is the act of revenge. They would like to kill those who have betrayed and/or damaged their lives. Said wants to get revenge on Nabawiyya and Ilish for betraying them while Gjorg wants to get revenge on Zef for killing his brother.

Throughout the chapter there are hardly any physical descriptions of the characters however there are other types of descriptions such as mental and emotional. Inside Gjorg, there is a “sense of desolation” (p8) and he is “fearful” and “simply troubled” (p8) at killing Zef. Said’s thoughts are filled with hatred and pessimism as he says to himself in the interior monologue “I swear I hate you all” (p153). Also both of the main characters have once had a lover whom they were engaged or married to but they got separated by an unstoppable event.

Said Mahran was married to Nabawiyya and they had a child named Sana but once Said went to jail, Nabawiyya betrayed him and filed for a divorce which couldn’t be stopped since Said was in jail. Then she went off and started a relationship with Said’s close friend Ilish. In ‘Broken April’, Gjorg was engaged but unfortunately he never go to marry her because his fianci?? e “died a year after a long illness” (p20). Throughout chapter one, both characters don’t change so as of chapter one, Said and Gjorg are both static characters.

Overall both characters share similar conflicts, similar construction of the characters and development. Other characters such as Nabawiyya, Ilish, Sana from the ‘Thief and the Dogs’ and Zef and Gjorg’s father from ‘Broken April’ are introduced in similar ways. They are introduced when the main character comes across them mentally or physically. Nabawiyya and Ilish are described through negative comments by Said while the other characters are not fully introduced yet; we are given bits and pieces about them. In conclusion, ‘The Thief and the Dogs’ and ‘Broken April’ share more similarities than they have differences.

This is possible because both writers have used similar structures for the plot and characterization or it could just be a coincidence. The key difference between the two texts is the setting of the novels and the defining similarities between them were the themes and the characterization of the two novels. These three areas of the novel were either completely different or completely similar. Then other areas such as literary features and techniques where somewhat similar and there were some contrasts that could be made between the two novels. 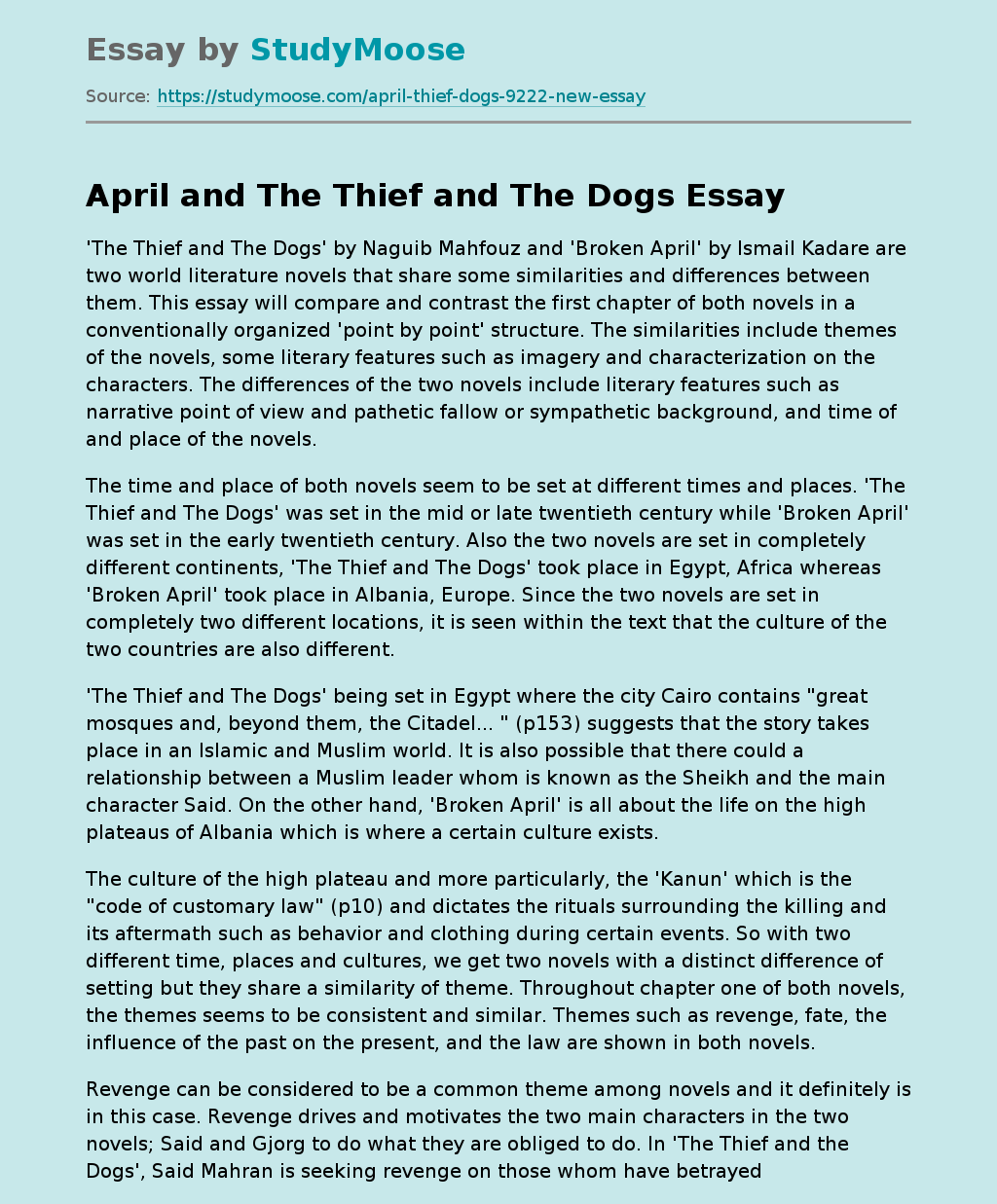