The Roman Empire and Han Dynasty both have many similarities and differences. The Roman Empire lasted from 27 BC – 476 CE. The Han Dynasty lasted from 206 – 220 BCE. The Roman Empire included parts of northern Europe, North Africa, and the Middle East. Throughout ancient history, this was known as the largest empire ever. On the other hand, the Han Dynasty included only the southeastern and northeastern parts of present-day China. Even though both Rome and Han were settled in different areas at different times, they were very similar in the way they chose their government officials & their duties and architectural accomplishments, but they had different thoughts on religion.

Turn in your highest-quality paper
Get a qualified writer to help you with
“ Ap World History Comparison – Han & China ”
Get high-quality paper
NEW! AI matching with writer

Both civilizations have been shown to have many similarities and differences, whether it was politically, architecturally, or religiously.

First of all, the two civilizations were both very similar in the way their government was run. The Han Dynasty and Roman Empire were both ruled by Emperors. They were both a bureaucratic government. Both societies were also patriarchal-based and class-based in how they elected their officials.

In order for the Han Dynasty’s potential candidates to become elected, they had to take a civil service exam. The civil service exam was used as an effective way of testing and eventually admitting the men into the bureaucracy. A bureaucracy is a group of non-elected officials inside a government who sets the functions, laws, and rules of that society. In the Roman Empire’s governmental system, the elected officials were appointed and did not need to take an exam, like the Han Dynasty.

In the time of the Han and Roman Empires, it was very difficult to govern the vast amounts of land and people that were under rule.

Secondly, both civilizations had architectural accomplishments. The Great Wall of China was built during the time of the Han Dynasty and took much effort and power from the people at the time. This was built as a defense system from outside invaders. Emperor Qin’s grave was discovered in 1974 with an army of terracotta soldiers, horses, and chariots surrounding his tomb for protection in the afterlife. The Romans built the aqueducts at the time of the Roman Empire. This system took water from rivers and brought them into the cities and people’s homes. It’s purpose was for personal hygiene. It was one of the first major sewage systems in the world.

Another Roman accomplishment was the Coliseum. It was used for entertainment. People would watch men, known as gladiators, fight animals and also each other. Sometimes, the Coliseum was flooded for reenactments of old battles. Statues and monuments were also made for elected officials that impacted the Empire dramatically, Roman and Han. Rome had such a complex system of roads, including the Silk Road, which a part of it originated in the Roman Empire. This is where they get the expression “All roads lead to Rome.”

Lastly, the Han and Roman civilizations were noticeably different in their religious beliefs. The Han Dynasty were only alike to the Roman Empire in how they both worshipped the forces of nature, practiced sacrifices, and created shrines to their many gods. The Roman Empire always supported whatever the official religion was at the time. Diversity in religion was tolerated. Christianity was frowned upon because the Christians put “Jesus as the King” and did not put the state of Rome or the current emperor first.

On the other hand, the Han Dynasty believed in the teachings of Confucius, Taoism, Buddhism, and studied the art of Feng Shui. Confucius taught people that they all had a place and responsibility within the family hierarchy. Taoism is known as living in peace with the Tao. Feng Shui is known as the “Earth divination” or finding the positive center of both Heaven and Earth.

Even though both Rome and Han were settled in different areas at different times, they were very similar in the way they chose their government officials & their duties and architectural accomplishments, but they had different thoughts on religion. Both civilizations have been shown to have many similarities and differences, whether it was politically, architecturally, or religiously. 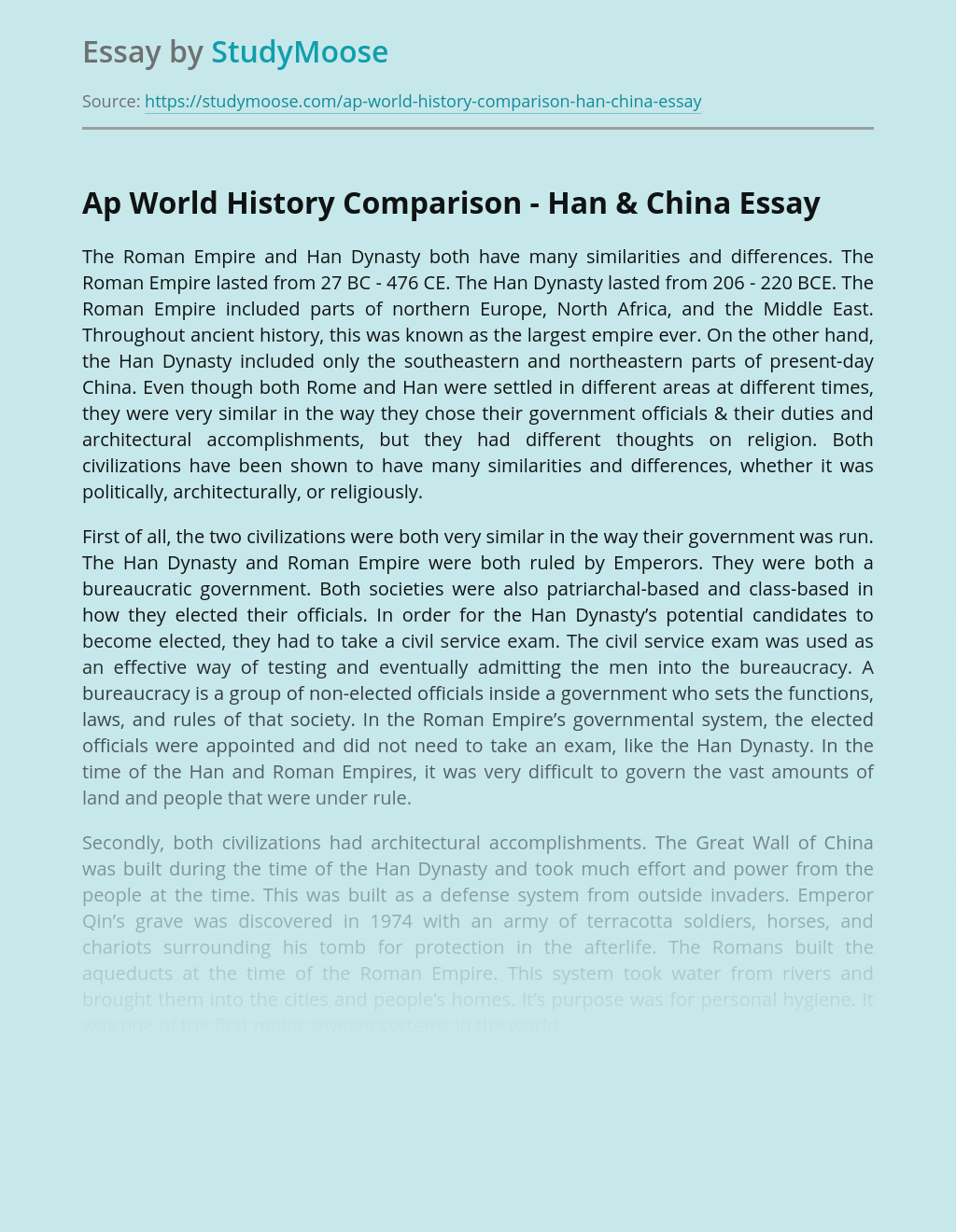 Turn in your highest-quality paper
Get a qualified writer to help you with
“ Ap World History Comparison – Han & China ”
Get high-quality paper
Helping students since 2015
Stay Safe, Stay Original