“Any officer who is doing the right thing on a daily basis would want to have a camera on them” (Siegel). Ever since the Ferguson, Missouri incident, when an unarmed African American man was shot by police officer Darren Wilson, the issue has been raised that body cameras should be used by officers to record what an officer faces daily and how they handle every situation. “By 2015, 95 percent of large police departments reported they were using body cameras or had committed to do so in the near future” (Ripley).

Don't use plagiarized sources. Get your custom essay on
“ Body Cameras Can Provide Truthful Evidence In Judicial Cases ”
Get custom paper
NEW! smart matching with writer

A police body camera is defined by Merriam-Webster as, “A video camera that is worn on clothing and used to continuously record activity in front of the wearer.” Body cameras provide citizens the opportunity to view what an officer sees when facing a life or death decision. This paper argues in favor of body cameras. The objective is to show that cameras are: reliable, easily accessible, and a tremendous asset to the law enforcement community.

On August 9, 2014, in Ferguson, Missouri, a young African American man named Michael Brown was walking with a friend down his neighborhood street when a police officer on patrol intercepted them after receiving a call about a robbery that took place nearby. The situation escalated, and the officer shot the unarmed Michael Brown who would eventually pass away from his wounds. The police officer had nobody camera. This event led to revolts and protests around the world against police officers. Many in the public criticized how law enforcement handles the situation.

Tom Jackson, the Police Chief of Ferguson, Missouri said, “Body cameras would have made a difference in the investigation of Brown’s shooting.” President Barrack Obama responded by issuing a plea for officers to use body-worn cameras on December 2, 2014. He said, “The problem is not just a Ferguson problem. It’s an American problem” (Korte). After the president’s response, it was granted that some police stations would be provided with cameras and training from the government.

Recently on the news, viewers have observed how video evidence provides the “inside story.” Unfortunately, not all officers have the advantage of owning a body camera. Body cameras must be provided to all officers serving their communities so they may document the police effort to ensure a safer environment.

Body cameras have been shown to provide solid evidence in defending or prosecuting. Body cameras allow the jury to view the entire story without “evidence tampering”. A body camera can help prove both sides of the story. Some citizens, though, believe that a body camera is an invasion of their privacy. There are some who do believe that the cameras will never accomplish the goal of helping and providing a safer atmosphere in the community. Even though officers are wearing the cameras, they can still do something that they are not supposed to do. Body cameras also come with a high monetary cost. Kern County Sheriff Sgt. Ian Chandler said, “It’s extremely expensive” (Kotowski). Police stations could have to pay a lot of money for something that could be used improperly by their officers. The recent events that have been televised showing the urgency on the matter, however. School shootings, suicides, reckless driving, and terror threats are real. Police officers all need to have body cameras for five reasons: Body cameras provide truthful evidence in judicial cases, Body cameras reduce the crime rate, Body cameras are better than other recording devices, Body camera footage can be used for training purposes for officers, and Body Cameras, in general, are just highly favored by officers.

The first reason officers should have body cameras is that body cameras can provide truthful evidence in judicial cases. 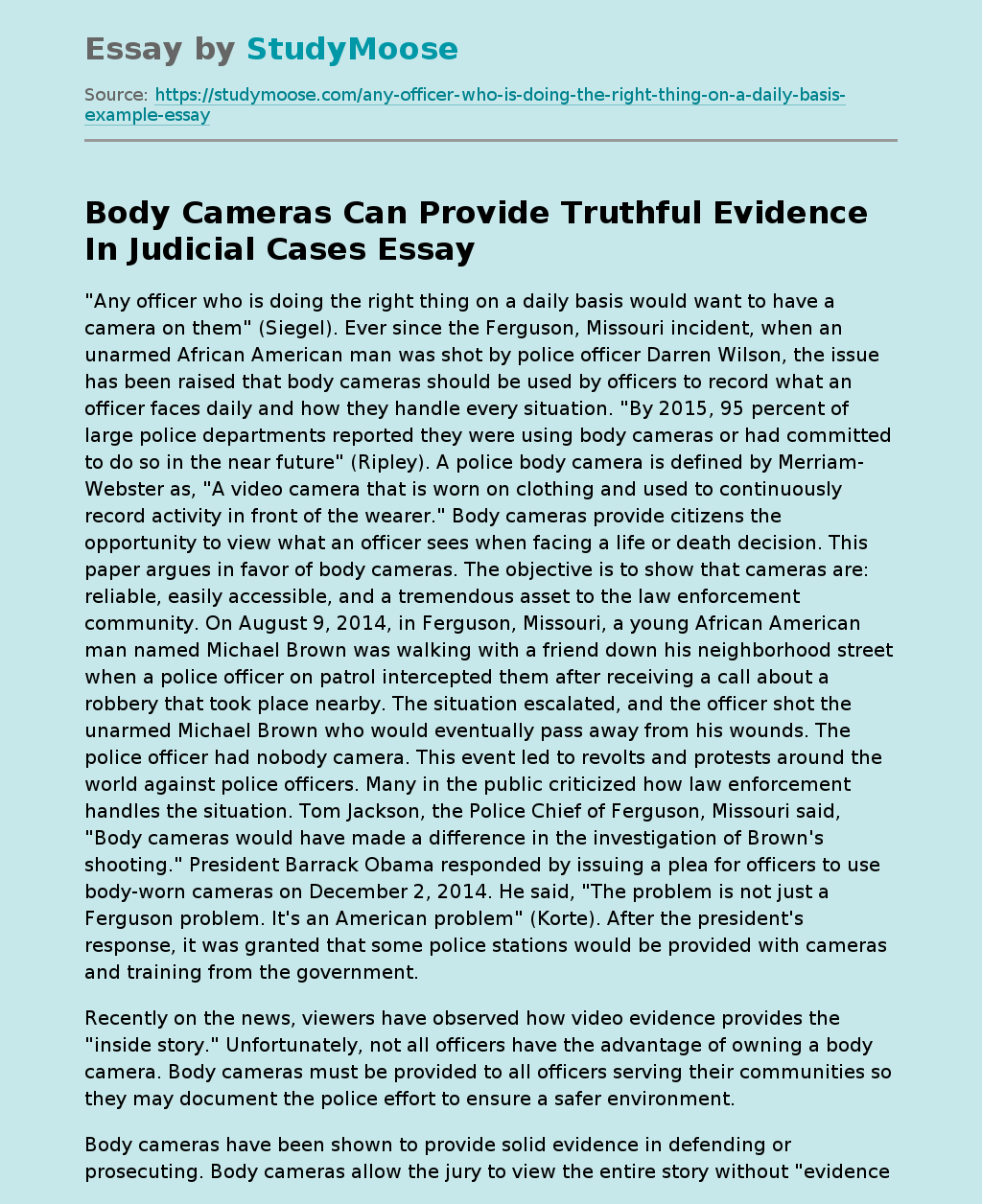