Use of surveillance cameras

Surveillance cameras are used all over the world in public and semi-public areas for a range of reasons. About three-quarters of small businesses record who comes into their location on CCTV. CCTV stands for closed-circuit television. There are systems that recognize license plates on moving vehicles and systems that monitor traffic flow and catch people violating traffic laws. Examples of relevant public places that CCTVs are used include: Public parks, pedestrianized streets in city centers, outdoor public parking areas, residential neighborhood streets, public transport interchanges and areas outside public facilities such as sports arenas.

Don't use plagiarized sources. Get your custom essay on
“ Use of surveillance cameras ”
Get custom paper
NEW! smart matching with writer

1. Surveillance is the monitoring of the behaviour, activities, or other changing information, usually of people for the purpose of influencing, managing, directing, or protecting them. The word surveillance comes from a French phrase for “watching over” (“sur” means “from above” and “veiller” means “to watch”).

2. The use of surveillance cameras in public areas is a very controversial issue. There are many arguments for and against the issue.

Some of the arguments in favour of the use of surveillance cameras are: they are very useful to governments and law enforcement to maintain social control, recognize and monitor threats, and prevent/investigate criminal activity. Governments often initially claim that cameras are meant to be used for traffic control, but many of them end up using them for general surveillance. Some supporters of surveillance systems believe that these tools protect society from terrorists and criminals. Other supporters simply believe that there is nothing that can be done about it, and that people must become accustomed to having no privacy.

As Sun Microsystems CEO Scott McNealy said, “You have zero privacy anyway. Get over it.”

3. Like most things, there is always a in favour, neutral and against opinion from people. I will start off with some facts that are in favour of using CCTV’s in public areas. A range of crimes have been solved by the seemingly ever-present security videos maintained by private companies or citizens. Investigators have been able to quickly apprehend suspects by obtaining the video, smartly turning private cameras into effective police resources. A study that took place in 2009 stated that In 90 murder cases over a one year period, CCTV was used in 86 investigations.

An example of when a surveillance camera solved a crime was 21st January 2013. Jason Smith was seen on surveillance footage at nearby stores and a hospital that captured the suspect entering the doctor’s home and later getting into his truck. He then confessed to killing Melissa Ketunuti, a pediatrician, in her home in Philadelphia.

4. One of the most infamous cases is that of Richard Whelan, who was stabbed to death on a bus in 2005 as he attempted to defend his girlfriend. The horrific 33-second attack was all caught on camera. Anthony Joseph, a paranoid schizophrenic, baited the victim by throwing chips at his girlfriend and the killer grinned at a CCTV camera as he left the bus.

5. There is not much research about those who have a neutral opinion on this topic. Although, there was a poll taken in 2001 showed that 15% of people responded that both clearing up crime and protecting personal privacy are both equally important. This poll was presented in the newspaper “Aftenposten” in an article titled “Two out of three accept video surveillance”. In the article, Anne Nyeggen from the Data Protection Agency is quoted as commenting that “it seems that people don’t care as long as the surveillance is ‘fighting crime’.”

6. While CCTV systems can prove to be a deterrent to crime and help in evidence gathering, these cameras aren’t always too popular with members of the public.

7. The various disadvantages associated with CCTV surveillance have prompted some organisations and political parties to criticise their use.

8. There are a quite a few campaigns, political parties and opinions against surveillance cameras. A couple of organisations are called “NO CCTV – campaigning against camera surveillance in the UK and beyond” and “Big Brother in your school”. Just because crime was reduced in an area with a dominant camera presence, that doesn’t mean that the crime has been prevented. In some cases, it has been shown to raise crime rates in areas a few blocks away where there are no cameras.

9. The main reason people are against CCTV’s is privacy. They constantly monitor the activities of people working and sometimes living. This fact alone upsets people, since many of us simply don’t like our privacy being invaded, regardless of the reason why the CCTV equipment is there. On rare occasions they could be inaccurate, because the technology isn’t perfect. The camera might miss details; for example, a concealed weapon which isn’t immediately visible on a person might not show up on CCTV footage. The expense of CCTVs is another reason some people are against it. They aren’t cheap to install, and if a property manager or owner is considering providing surveillance equipment, he’s looking at quite a large bill. Once bought, CCTV cameras must also be installed correctly by experts and monitored regularly, all of which adds up. This total cost can stretch the budget of institutions such as schools. Most CCTV cameras are installed out of the reach of the public, but sometimes a camera can still get damaged by someone going out of their way to damage it. CCTV equipment is sensitive to knocks and can malfunction if interfered with. In the interval between the damage occurring and the camera being replaced, activities may not be recorded by the affected camera.10

Personally, I think the current laws and surveillance camera’s they have in place are fine and do not bother me at all. After reading and researching the opinions against surveillance camera’s I definitely know I am in favour of them. I don’t feel like my privacy is being invaded there is a camera recording me, because I know it’s for a good purpose and to help to protect the environment and the public including myself. Ethically, I think surveillance camera’s need to continue being used like they are now and I would not trust being in some places without them.

Use of surveillance cameras. (2016, Mar 28). Retrieved from https://studymoose.com/use-of-surveillance-cameras-essay 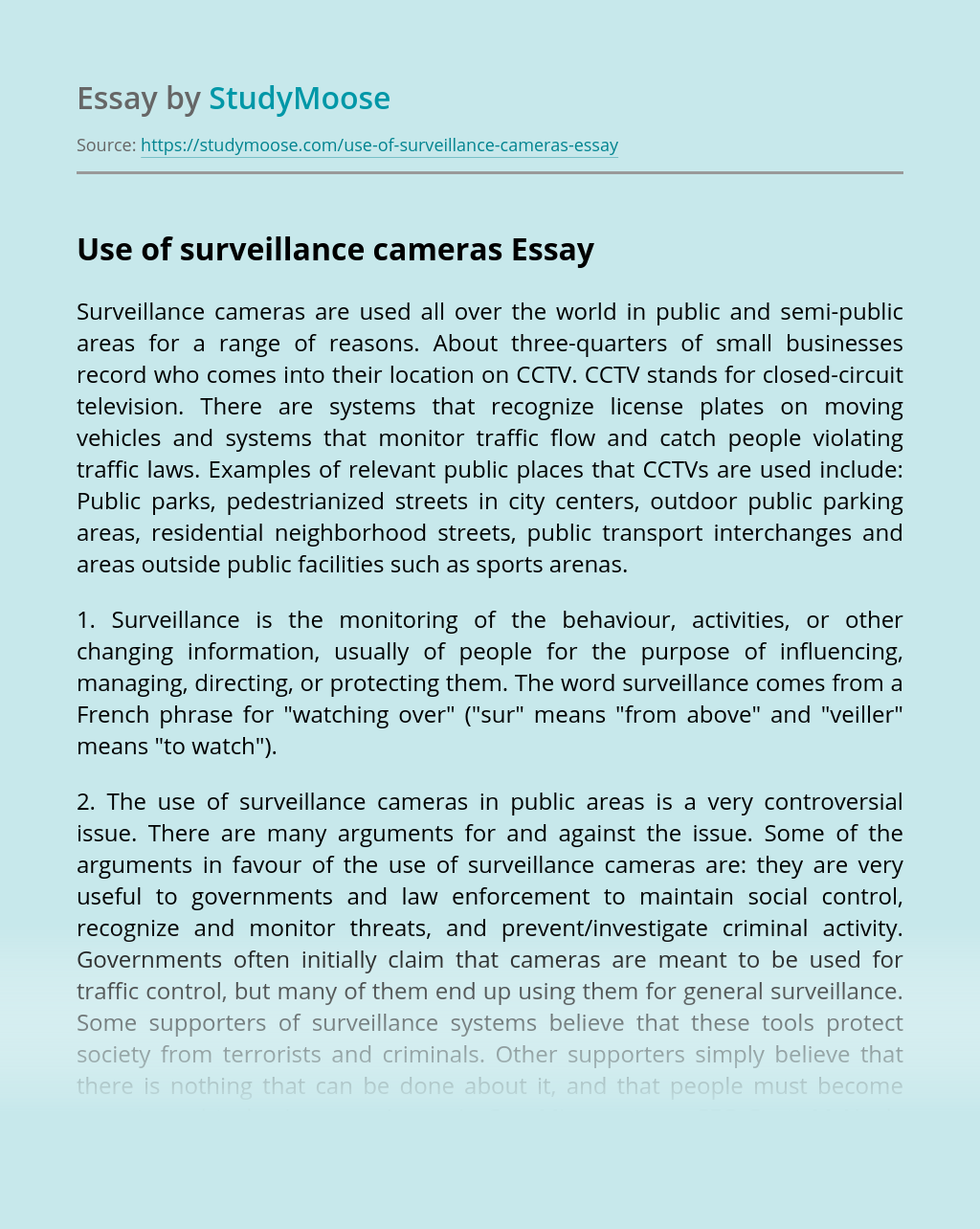