As with any new technology, police body-worn cameras are becoming the new trend in the law enforcement community. While camera and surveillance systems have been around for a quite a while, body-worn cameras have seen increase popularity as several high profile cases have brought this technology to the forefront. As agencies proceed forward with pilot programs to evaluate its usefulness, they must decide if the perceived benefits justify the cost and expense to implement such a program.

From the general public perspective, the use of body worn cameras represents police accountability and transparency.

Don't use plagiarized sources. Get your custom essay on
“ Benefits of Police Body Cameras ”
Get custom paper
NEW! smart matching with writer

By their use alone studies have shown they improve officer professionalism and behavior. As agencies implement body worn cameras, officers will be more aware of their actions and interactions with the general public and less likely to cross the line between use of force necessary to apprehend suspects and blatant over use of force.

That same perspective is also true from the law enforcement community. Studies have shown from many different sources that when individuals are being recorded or that they are aware their actions are being recorded, their behavior will change.

They are more aware of their behavior and will potentially alter their interactions with the person who is recording. “Accumulated evidence further suggests that individuals who are aware that they being-observed often embrace submissive or commonly-accepted behavior, particularly when the observer is a rule-enforcing entity.” (“Self-Awareness to being watched and Socially-Desirable Behavior,” 2013, p. 2). There are many times in an officer’s career when the person they arrest and the behavior they display on scene is quite the stark contrast when both meet in the courtroom for trial.

The professionally dressed defendant who speaks intelligently is much different than the drunken patron that was involved in a fight and arrested for battery. Had camera footage been available, the impression would be quite different when presented to a judge. If the defendant was aware that he was being recorded, his behavior would most likely be different. “It can be incredibly frustrating to arrive in court to find a defendant dressed professionally in a suit with an angelic demeanor that’s completely opposite of the person who was arrested. Using cameras to capture that person’s true character and behavior can be very beneficial when it comes to prosecution.” (McFarlin, 2015, para. 4).

Along with possible behavior modifications, other perceived benefits of body-worn cameras for agencies are reduced citizen complaints and officer use of force incidents. In 2012, the City of Rialto Police Department, in conjunction with the University of Cambridge (UK), conducted a yearlong study on the effects and impacts of police worn body cameras. Over the course of a year period, different patrol shifts were given cameras while others were not. The study was a random sample of different shifts at different times over the course of the study. After the yearlong pilot, the results were amazing. The groups that were assigned body cameras had a reduction of use-of-force incidents by 60% from the previous year. The study also concluded that citizen complaints for that same group were reduced by 88% over the previous year’s findings. The Rialto Police Chief stated,” Whether the reduced number of complaints was because of the officers behaving better or the citizens behaving better—well, it was probably a little bit of both.” (Police Executive Research Forum [PERF], 2014, p. 5).

In both studies, the overwhelming results state that body-worn cameras reduced citizen complaints. This is due in part to behavior on both sides from the awareness of having the incident being recorded. Greensboro’s Police Chief Ken Miller states, “We actually encourage our officers to let people know that they are recording. “Why? Because we think that it elevates behavior on both sides of the camera.” (PERF, 2014, p. 6).

Video footage from officer’s using the body-worn cameras can also be used to correct internal agency problems and well as a useful training tool. In a recent survey from Police Chiefs around the country on the use of body camera video, 94% of the respondents stated that they use it as a training tool or for review by administrators to correct officer behavior. (PERF, 2014, p. 7). Body camera video has a multitude of training examples. While reviewing footage, administrators can evaluate current policies and determine if revisions need to be made based on actual officer encounters. The training department can create very specific scenarios to train their officers based on actual calls in the field. Additionally, officer training can now be specific to the individual agency or internal department.

Perhaps one of the biggest benefits to law enforcement will be capturing and documenting evidence for criminal investigations. Again, it’s just another tool that can aid in the successful prosecution of criminals. When officers respond to a major crime scene, most of their focus and first priority is securing the scene and aiding victims with first aid measures. As they start their interviews and try to put together what happened, it is difficult to remember all the details. By using a body-worn camera, the officer is able to capture the scene and many of the small details that would have been missed. As they are walking around the crime scene, they are actually recorded it as it was upon initial response. This tool can provide a wealth of information to detectives that usually arrive well after the fact when it is calm and not hurried. Police Chief Parker of Dalton, Georgia states, “Unlike in-car cameras, body-worn cameras capture everything that happens as officers’ travel around the scene and interview multiple people. The body-worn cameras have been incredibly useful in accurately preserving information.” (PERF, 2014, p. 9).

Local prosecutors are also encouraged and actively engaging agencies to adopt this technology. Having a video record to present in court is usually hard to defend. In Kentucky, a local defense attorney commented on the use of providing body-worn camera video. “It makes it much easier for them to understand a guilty plea is probably going to be in their best interest, because you don’t want a jury to see this”. (Mateescu, Rosenblat, & Boyd, 2015, p. 27). This is particularly true for domestic violence case when the video evidence is provided in court. Many times, especially if there is a pattern of abuse and the victims are afraid, they do not want to press charges. Gathering evidence is difficult at best. Coupled with uncooperative victims and prosecution is almost nearly impossible. By providing prosecutors with video evidence upon arriving on scene, it will capture the demeanor of the victims and suspects as well as any injuries sustained. Providing this information to prosecutors, they can build a case even if the victim refuses to press charges or declines to provide a statement. Chief Miller of Topeka stated, “When we show suspects in domestic violence cases footage from the body-worn cameras, often they plead guilty without even having to go to trial.” (PERF, 2014, p. 9).

Self-Awareness to being watched and Socially-Desirable Behavior: A Field Experiment on the Effect of Body-Worn Cameras on Police Use-of-Force [Special section]. (2013). Police Foundation, 1 – 14. Retrieved from www.policefoundation.org 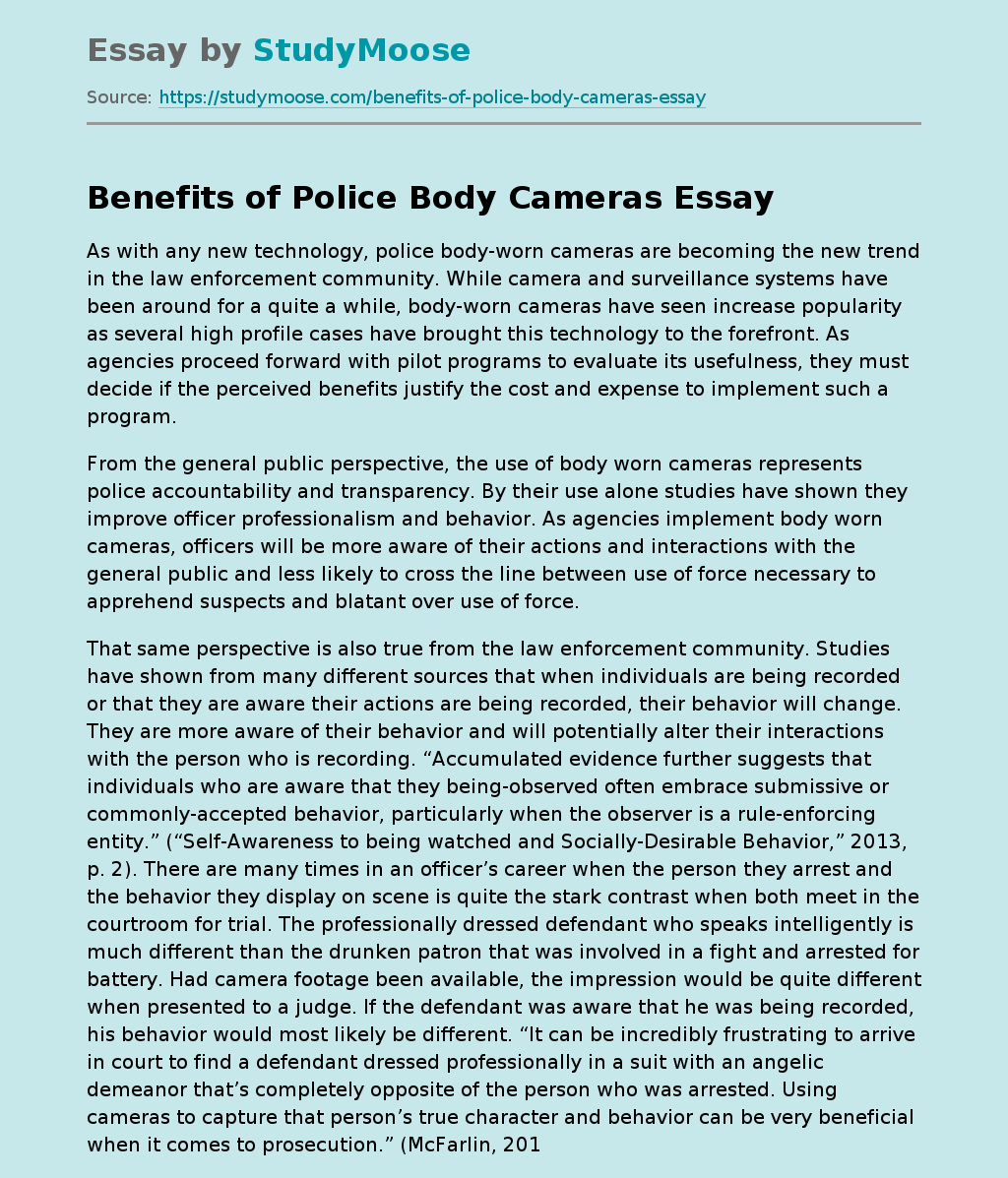