The classic example is the aspiring young corporate executive whose clothing, speech, reading materials, politics, and even sports interests emulate those of people occupying roles to which he aspires.

Turn in your highest-quality paper
Get a qualified writer to help you with
“ Anticipatory Socialization In Work ”
Get high-quality paper
NEW! AI matching with writer

For many, this emulation begins long before a specific job is taken. From observations of two graduate programs in business administration—one associated with a prestigious Catholic university of about 7,000 students, the other with a southern state university of about 15,000 students–this writer has drawn the following basic conclusions: A conscious effort is made in graduate training to indoctrinate students not only into the required technical skills but also into behavioral patterns that will be required of them as business people.

Indeed, students overall grades and the kinds of recommendations they will receive depend more than a little on how well they have mastered those nontechnical, behavioral skills.’Research on medical training shows similar findings (Becker et al, 1961). Future doctors are expected to internalize “bedside manners” as well as to learn medical skills. Indeed, a recent article by J. B. Reuler et al. has projected a new emphasis on the importance of the bedside manner in doctor-patient relations (Jounral of the American Medical Association, 1980).

Similar inferences can be drawn from research on blue-collar workers, although anticipatory socialization was not the focus of this research. Studies by Donald Roy and Ely Chinoy (much of which was based on the classic research in the 1930s by Roethlisberger and W. J. Dickson) indicate that the acceptance of primary work group values and norms, particularly as they relate to productivity, is a prerequisite to group membership (American Journal of Sociology, 1954, 1951-52). After membership is gained, both social and physical sanctions may be applied if the norms are violated.

Recent research on young fishermen has revealed that anticipatory socialization begins very early in that occupation (Maiolo and Bort, 1980). Many adult fishermen do not want their children to fish for a living. Still, a sizable proportion of sons do follow in their fathers’ footsteps. As the youngsters accompany adult fishermen, they learn the special techniques of caring for gear and setting traps and nets. They begin to learn the language of predicting harvest levels and where the most productive fishing locations, or “sets,” are. Some try their hand at making boats, and some have been observed fishing alone at the early age of thirteen. The “correct” raingear is a treasured birthday gift, and the strategy of selling fish is a particularly important skill that is sought at a very early age.

In sum, anticipatory socialization is a serious and ubiquitous phenomenon in the world of work. Further, that process includes the inculcation of social as well as technical skills. 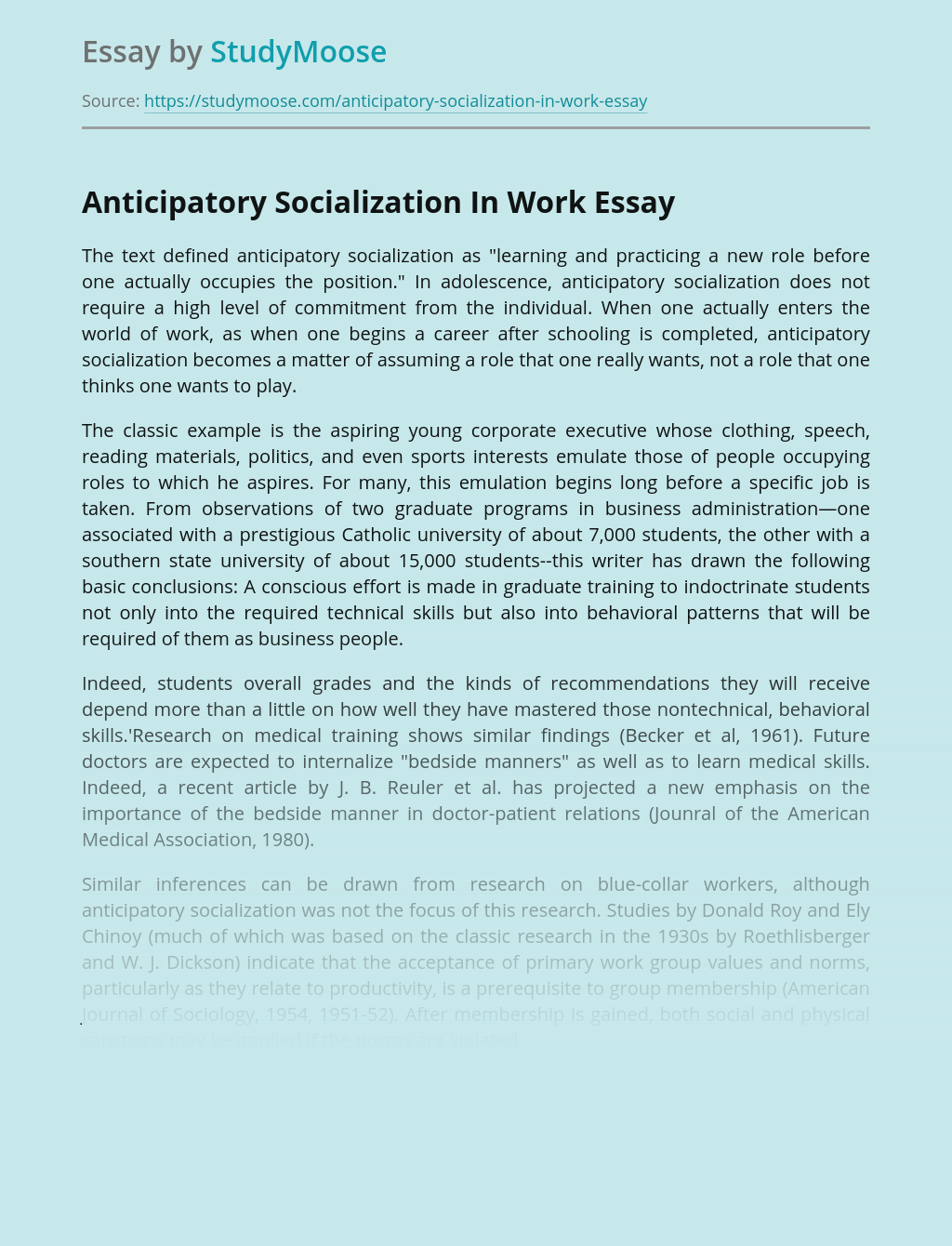 Turn in your highest-quality paper
Get a qualified writer to help you with
“ Anticipatory Socialization In Work ”
Get high-quality paper
Helping students since 2015
Stay Safe, Stay Original