The Role of Parents in Gender Socialization

Gender socialization, or the “patterns of behavior taught to children and adults in order to help them learn to behave as acceptable females or males,” begins strikingly early in life (Disch 1). While society as a whole is responsible for carrying out such socialization, many researchers believe that the strongest influence on gender role development seems to occur within the family setting, with parents passing on, both overtly and covertly, their own beliefs about gender (Witt 1). Because parents have the strongest initial influence and control over the early gender socialization their children undergo, they also have the potential to end the cycle of oppressive gender socialization most children experience from birth onward, and eventually perpetuate (again) in their own children.

Don't use plagiarized sources. Get your custom essay on
“ The Role of Parents in Gender Socialization ”
Get custom paper
NEW! smart matching with writer

Author Bobbie Harro describes the cycle of socialization as perpetual, a continuous practice in which, as adults, we teach children the same values and beliefs that were ingrained in us as children (Harro 15).

Various pieces of literature provide examples of this cycle, demonstrating the power of parents in early gender socialization and the potential they have in altering the traditional views of gender roles for their children.

Michael Ryan’s poem “Milk the Mouse” captures the power parents have in enforcing a traditional gender role on their child. The subject of the text, a young child of only four or five, is already undergoing gender socialization at the hand (literally) of the father. While the poem does not explicitly state that the narrator is a boy, it is possible to infer from the events taking place that the narrator is, in fact, male; the father repeats to the child, “Be strong! Be tough!” while causing physical pain to the child, reinforcing characteristics prized and expected from the male gender (Ryan 1).

Men are stereotypically dominant, aggressive, fearless, and tough, and the speaker of the poem is expected to embody such traits (Brewer 1).

The father in the poem has the opportunity to instill in the young boy a value for diverse traits, including those non-typical of his sex, but chooses instead to continue the cycle of traditional gender socialization. It is also evidenced in the poem that the father’s actions are the product of Harro’s cycle, as the speaker reveals that his father is not speaking to him but instead to the “child inside him aching” (Ryan 1). Rather, the father is teaching his son what he was likely taught as a child: that men are strong, and that he must be strong to survive in the world. Debora Greger’s piece, “The Armorer’s Daughter” continues to reflect the notable role of parents in gender socialization. Again, the father figure in the poem imposes his view of one gender upon his child, though this time, the child is female. Rather than value the girl, the father is forced to “[make] the best of it” and “make [her] into what was missing,” meaning he must deal with his wife giving birth to what he sees as the more inferior of the two sexes (Greger 1).

Consequently, he chooses to shape his daughter into as masculine a woman as he can instead of allotting her a choice between feminine and masculine behaviors (Greger 1). The female speaker of the poem expresses the contradictory nature of such gender socialization, claiming, “I am and am not him,” asserting that her father’s attempt to shape her into his female counterpart has not been entirely successful. Not only does the father exercise his power to force the girl into a gender role she is not entirely comfortable with, he also demonstrates the preference of sons to daughters that many parents seem to express—a recent study of American men and women revealed that 40 percent prefer having a boy over a girl (“Americans prefer” 1). Conversely, Carl Sandburg’s poem, “A Father to His Son,” displays the potential parents have to alter the cycle of typical gender socialization. Instead of bombarding his son with advice on how to embody the usual male gender stereotypes, the speaker/father in the poem encourages his son to value traits that are both masculine and feminine.

For example, the father initially tells the son, “Life is hard; be steel; be a rock,” aggressive, rough traits expected of men (Sandburg 1). But he goes on to promote being ‘softer,’ recommending he “be gentle; go easy,” characteristics often associated with women (Sandburg 1). The father encourages his son to be ambitious and intelligent, both stereotypically male qualities, directing him to “seek deep” so that he may be able to understand the works of Shakespeare and others, perhaps enabling him to facilitate some sort of change in the world (Sandburg 1). Yet he also advises him to be foolish on occasion and even to value such behavior—an attribute more commonly linked to women and frowned upon in men. The relationship with their parents are often the first to be experienced by children, making it perhaps the most fundamental of all and one of the most impactful in terms of gender socialization. Parents are the first socialization agents children come into contact with (Crespi 3).

They are the first to influence how their children view gender roles, and often tend to perpetuate the typical views they themselves were taught as children, thus furthering the cycle described by Harro. Of course, literature reflects reality, exploring the dynamics of parents and gender socialization on children from varying angles. As both Ryan’s “Milk the Mouse” and Greger’s “The Armorer’s Daughter” suggest, parents often aid traditional gender socialization, prompting their children to uphold the stereotypes of their sex. But, as Sandburg’s “A Father to His Son” proves, it is possible for parents to break or, at the very least challenge, the cycle of gender socialization, and teach children of either gender to embody and value both “masculine” and “feminine” qualities.

The Role of Parents in Gender Socialization. (2016, Mar 31). Retrieved from http://studymoose.com/the-role-of-parents-in-gender-socialization-essay 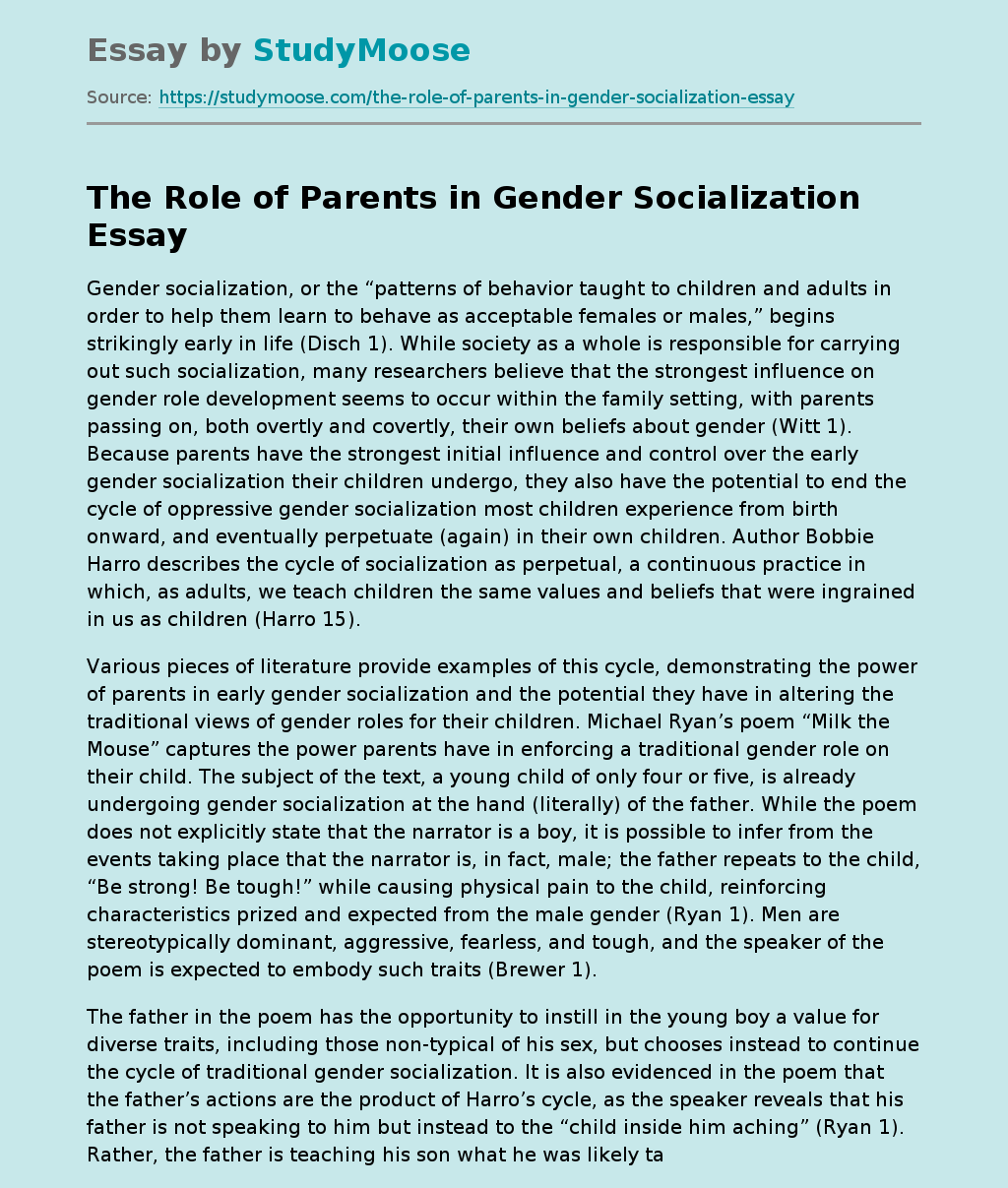