These are crucial aspects to any individual’s life and they represent all key fields that guide one’s entire life.

Turn in your highest-quality paper
Get a qualified writer to help you with
“ Failure Of Socialization ”
Get high-quality paper
NEW! AI matching with writer

The failure of a convenient and effective socialization process could therefore lead to a whole host of problems and complications to the subject in question. Socialization agents are responsible for an individual’s self concept, emotions, behavior, and attitudes. (Chinoy 1961)

Failure of socialization at the family level could have the most severe effects to an individual and the course of his life. (Clausen 1968)

Recent study has suggested that the socialization process starts at the womb as opposed to earlier when socialization was thought to begin when a child is conceived. This therefore means that failure of socialization (if it occurs) starts at the mother’s womb. Doctors earlier believed that the process that a fertilized egg follows until it becomes a baby had a definite genetic path.

This however has been proved not to be true. Doctors now believe that fetal development is a complicated affair between the genes of the baby and the information relayed to it by the mother. The mother transmits signals to the fetus and the fetus chooses one path over another.

This multiplicity of choices leads to long time changes to the baby’s body organs as well as to the level of brain sensitivity. (Warren 2009) Although this kind of research is at its earlier stages, there is substantial evidence to prove that indeed the interactions of the fetus within the first nine months have major effects on life after birth. A baby’s days in the womb and the nature of his experiences influences his emotional and physical make up for the rest of his years. For instance, if the mother is stressed and anxious during her pregnancy maybe because of financial constraints or a troubled marriage, the stress hormone cortisol may reach the baby (fetus).

The fetus develops fewer brain receptors to sense cortisol presence because it does not need many. Having fewer receptors does however change an individual’s ability to cope in life at a later stage. When hormone cortisol reaches a certain point in the bloodstream, the system ceases producing the hormone and everything returns to normal. The problem is that, people with fewer receptors do not sense the right time to stop hormone cortisol production. High levels of the hormone in the body create a wear and tear in the body. It also makes it difficult for a person to handle strong emotions without withdrawing or lashing out.

The inability to handle strong emotions may result to the person getting depressed or much stressed. In a study that targeted women in England, those who had high levels of anxiety during pregnancy gave birth to children with twice the rate of behavioral and emotional problems at the age of ten. (Chamberlain 2009)

Robert Harris, a convicted murderer executed in the State of California gas chambers, was born almost three months early when his father kicked his mother brutally in the abdomen. Harris would be subjected through many other violent experiences by his parents, violence he later on turned on innocent people.

When Harris was twenty five years old, he shot dead two teenagers, laughed at them as he calmly ate some hamburgers they had bought for lunch. Recent research has suggested that criminals have poorly functioning brains. Research has also suggested that there is substantial evidence to justify labeling violent and criminal behavior as a disorder resulting from impairment of the prefrontal area as well as other dysfunctions and brain injuries. For instance, a study conducted on juveniles on death row found a consistent pattern of paranoid misconception, neurological impairment, and low intelligence quotient among these juveniles. These brain based origins of violence start when the child is still in the womb of his mother.

Having an impaired brain means that one would have a more difficulty life, more frustration, and little self control. This gives rise to misery, violent and criminal behavior and even death. (Chamberlain 2009)

Attachment is the reciprocal process through which emotional connection is developed between an infant and a caregiver. It is a binding psychological and emotional tie that an individual forms and that lasts over a period of time. Infants develop attachment to their main care givers especially mothers, fathers, day care workers, grandparents, and other siblings. Reciprocal socialization is a bidirectional socialization process. For instance, children interact with their parent and their parents give them feedback. A mother-infant interaction is at times symbolized as a dialogue in which subsequent actions of the both parties are closely coordinated.

The mother and the infant can match each other’s actions, as in when they both engage in mutual smiles. The parent also serves to support a child’s efforts therefore allowing the child to be more skillful. This is all part of the attachment process. According to attachment theorists, attachment is necessary if a child is to have a normal social and emotional development. A secure relationship with adult caregivers is necessary for the survival and healthy development of a child. Attachment influences an infant’s physical, psychological and cognitive development. It is also the basis for a child’s development of either trust or mistrust.

Attachment is imperative to a child’s development because it shapes how a child learns, relates to the world, forms, and maintains relationship throughout his entire life. It is necessary for infants to stay near familiar people because this brings safety advantages to their early adaptation environment. Secure attachment takes place when an infant experiences constant care and gets emotional essentials from a caregiver. When the process of attachment is disrupted, the infant may fail to develop a secure base needed for a healthy survival and development. Factors which impair or harm a healthy or a secure attachment include;

Poor attachment causes the child to have inner feelings of insecurity, intense anger, and self hate. Below are some common causes of attachment problems:

Sudden separation of the infant from the main caregiver either through removal, death, illness etc.
Abuse (physical, emotional or sexual) by an adult.
Infant pain or medical condition that a caregiver cannot alleviate.
A depressed caregiver.
Inadequate or inconsistent attention and care.
Neglect.

Separation is a physical as well as an emotional experience for an infant and can take place either before birth or after birth. Separation is usually accompanied by violence from the child. The connection between a baby and the mother during gestation is total and holistic. Attachment demands that a child be constantly and consistently taken care of by one person. A baby has his own mechanism of knowing whether he is taken care of or is being rejected and neglected. (Johnson 1961)

In a study conducted in Sweden, Finland, and Czechoslovakia for more than thirty years, mothers were denied abortion and compelled to give birth and raise their children. As the children grew older, they demonstrated a greater risk for not only social but also psychiatric problems compared to stable subjects. Majority of those unwanted children turned out to be delinquents and had a three times higher chance of being in the criminal register.

Research has shown that children who never had a consistent close relationship with anyone (attachment) lack conscience even when they grow up. They have a probability of becoming psychopathic killers because they have no affectionate emotions. Because of going through an early life unattached, they lack empathy, guilt, and trust and can even kill without caring.

Psychologist Andrew Feldmar observed four teenagers who were repeatedly trying to commit suicide at the same time each year. When he did research on those four cases, he realized that their mothers had attempted abortion at the same time of the year that those adolescents were attempting suicide. (Carlie 2002) Any traumatic separation of the infant from the mother or the primary caregiver due to illness, injury, or any other traumatic cause follows the child throughout his life until it is dealt with in the proper manner.

Until this traumatic separation is confronted and dealt with, there is a possibility of detrimental psychosis to occur which will impact the person negatively. Such detrimental impact can be manifested in several ways such as troubled relationships, and trouble with authority in general. Individuals who lack proper socialization during attachment have a higher risk of finding themselves in prisons. (Moss 2008)

Children who have experienced problematic attachment exhibit some observable behaviors. These behaviors include;

When children with problematic attachment develop into adulthood, they become unable to engage in reciprocal relationships. They feign charm and are superficially engaging. They also show indiscriminate affection to strangers unintentionally. They rarely have direct eye contact with whomever they are communicating with. They are poor in forming lasting peer relationships and have a low esteem. They can be very demanding at times.
Children who have experienced problematic attachment have poor cause and effect thinking. They have
a.       It is difficult for them to learn from mistakes.

b.      They experience learning problems.

They have an emotionally disturbed development. For instance they;
a.       Have abnormal speech patterns

They have puerile fear, anxiety, aggression, and rage. Their conscience develops poorly. They may become chronic liars, thieves, and generally cruel to other people for no reason. They may become destructive to themselves as well as others without caring much about their actions and behavior. They may also destroy property maliciously.
A negative attachment cycle. The child is likely to have difficulties fitting in the family because;
a.       He engages in negative behavior that cannot escape the parents’ and siblings’ notice.

b.      Due to the nature, extent, and consistency of negative behavior the parents are constantly engaged in quarrels with the child hence aggravating the situation.

c.       The distance and the connection between the parent and the child is severed

Antisocial personality disorder is a persistent pattern of disregard and violation of other people’s rights that begin in early years (childhood or adolescence) and continues into adulthood. For a person to be categorized as having this condition, he must have attained the age of eighteen and must have a history of conduct disorder. Individuals with this type of condition are sometimes labeled as psychopaths or sociopaths.

This condition is characterized with general lack of conscience and a weak capability to control aggressive urges and defer gratification. It does not necessarily lead to criminal and violent behavior in itself but rather individuals with this condition are more prone to violent and criminal behavior. Individuals with antisocial personality disorder differ in their control abilities and general desires.

Some researchers though indicate that these labels are not synonymous with the antisocial personality disorder. As indicated earlier, the socialization process is responsible for imparting an individual with moral norms, motives, values, attitudes, language, symbols, and social roles. 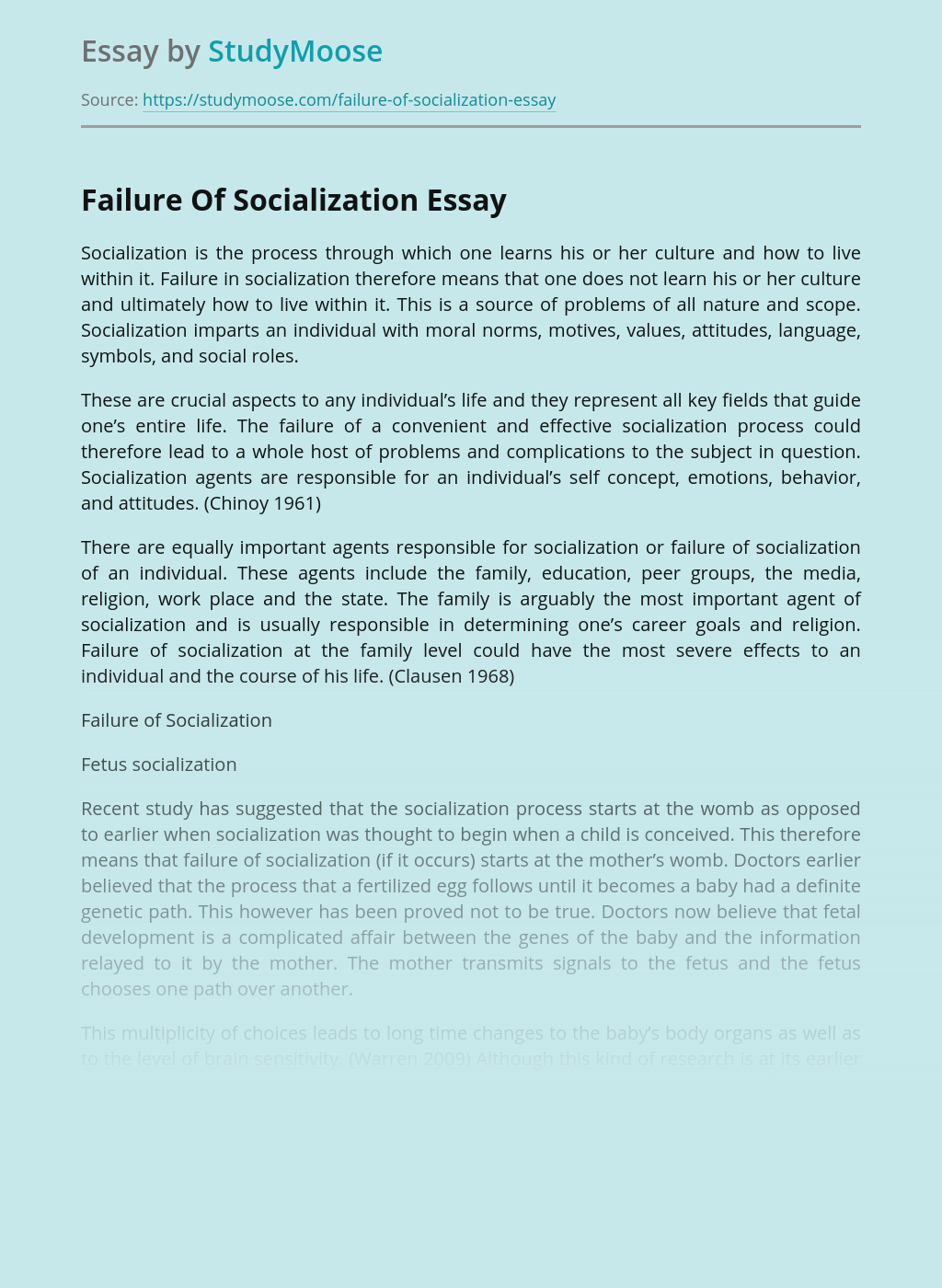 Turn in your highest-quality paper
Get a qualified writer to help you with
“ Failure Of Socialization ”
Get high-quality paper
Helping students since 2015
Stay Safe, Stay Original