The issue of gun control is relevant and controversial. Politics, Economists, psychologists and sociologists from all over the world argue for many years if using guns should be legal or not. There are a lot of arguments why we need gun control and why we don’t. As for me, I prefer the latter position due to the following reasons.

The legalization of short-barreled weapons will enhance the citizen’s’ ability to self-defense. An opportunity to defend oneself from illegal actions is provided in the most constitutions of civilized countries.

Don't use plagiarized sources. Get your custom essay on
“ Anti-Gun Control Arguments ”
Get custom paper
NEW! smart matching with writer

Of course, it would be strengthened. If the pistols were useless in matters of self-defense, their release would have stopped long ago. In this case, do not assume that any person due to the presence of his weapon will turn into invulnerable. Some opponents of anti-gun control are confident that only professionals will be able to use it. This is also incorrect. To some extent, all its owners will be able to take advantage of guns, and exhausting themselves by training will significantly increase the chances of success.

However, training will not deduce all interested persons on a level of unheard-of efficiency.

The police, for example, train quite a lot, but the main factor of success is still competent patrolling and competent tactics of joint actions. And even after numerous training, the percentage of hits in an extreme situation remains very small. Citizens, as it is easy to guess, on average will train much less.

The psychological effect of weapons shouldn’t be discounted.

It really will have an effect on many potential criminals. However, do not think that all the criminals will be stopped by the gun.

The presence of guns encourages citizens to come to the aid of other citizens. How many such cases will there be? There are also big discrepancies in assessments. I think that fighters for legalization must necessarily fight for changing the accompanying legislation because weapons that can not be used are useful only for a criminal.

One of the main arguments against gun control is a statement that it leads to a decrease in the level of crime, as potential criminals fear for their lives and health. To commit a crime in relation to a citizen with a pistol is much harder than to a person without it. In this aspect, the United States is a good example. To see the obvious evil or obvious good in a legal shortcut is somewhat strange: among the leaders by a crime rate, the number of murders and, by the number of criminal use of weapons, both the countries where the weapon is legalized and the countries where it is banned are located. Conversely, in the lower rows of ratings are also both states.

The presence of weapons makes a person calmer and more responsible. The presence of guns really inspires confidence in themselves. Many even want a gun because of the psychological effect it has. Very few people like to go home through the deserted dark streets and shake with fear. The gun in your pocket lowers fear in any case. This is already a very positive factor.

The criminals have weapons, and citizens are banned to gave it. It is necessary to level the chances at least in the name of justice. Indeed, the number of guns in the hands of criminals and migrants exceeds all reasonable limits. For some reason, it is forbidden for a normal citizen to have it in a lot of countries. However, I think that there is no question of equalizing chances. Only the reasonable activity of the state, in which it finally stands up for the protection of honest citizens, and not criminals, can stand the chances. Nevertheless, justice for me is not an empty phrase. I believe that this situation is primarily humiliating.

The ban on carrying weapons is evidence of the anti-popular nature of power. Unfortunately, this is really so in many countries. There are some countries where the authorities openly patronize criminals and make citizens live in ignorance. In particular, with its help indifference and non-interference are cultivated. It is not surprising that in these countries there is no civil society, but there is one of the highest levels of crime.

Gun control articles also contain a lot of other arguments of legalizing or banning weapons to be carried by the ordinary citizens. However, I believe that permission to have weapons is an indicator of development, civilization, and reasonableness of both citizens of the whole country and its leaders. 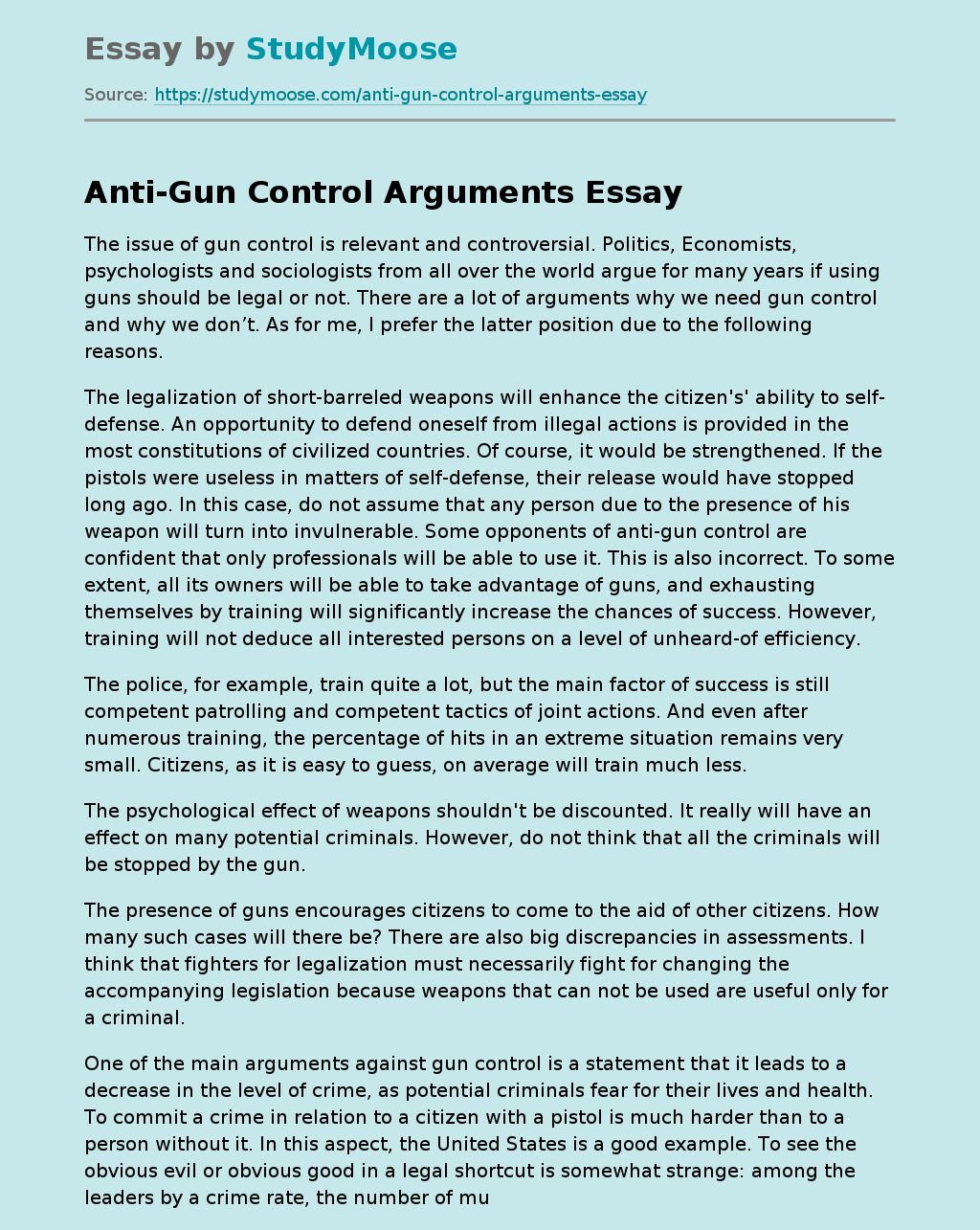