And Then They Came for Us

Almost seventy-five years ago, on February 19, 1942, President Franklin D. Roosevelt signed and issued the United States presidential Executive Order 9006 during World War II. Executive Order 9006 authorized the United States military to relocate approximately 120,000 men, women, and children of Japanese ancestry to internment camps all across the United States. The film And Then They Came for Us and panel discussion featuring Karen Korematsu and Don Tamaki focuses on the connections between the result of the Japanese American internment, present day concerns about reemerging constitutional questions of immigration, race relations, and citizenship.

Don't use plagiarized sources. Get your custom essay on
“ And Then They Came for Us ”
Get custom paper
NEW! smart matching with writer

While analyzing both the film and panel discussion, these historical events are similar to those of various minority groups. This essay will discuss the United States’ constitutional guarantees, historical examples of minorities, and provide a critical analysis of how the past can further promote the contemporary era.

In the Constitution of the United States, it guarantees citizen rights such as, due process, equal protection, and religious freedom. However, Executive Order 9006 and other historical events paved the way to the profound violation of these particular constitutional rights.

Due process is the legal requirement of the state that must respect all legal rights that are owed to a person. This right balances the power of law of the land and protects the individual person from it. In addition, equal protection is embedded within the Fourteenth Amendment, requiring that states guarantee the same rights, privileges, and protections to all citizens. This doctrine reinforces that of due process of law and prevents states from passing or enforcing laws that arbitrarily discriminate against anyone.

Moreover, freedom of religion is a principle that supports the freedom of an individual or community, in public or private, to manifest religion or belief in teaching, practice, worship, and observance. The violation of constitutional rights can be dated back as far as 1848 when the Treaty of Guadalupe Hidalgo. In Natalia Molina’s, How Race Is Made In America: Immigration, Citizenship, and the Historical Power of Racial Scripts, she states:

After the U.S. War with Mexico (1846-48), Mexicans entered the United States linked to two competing racial scripts: indigeneity and whiteness. The war and the ideology of Manifest Destiny that justified it highlighted Mexicans’ inferior racial position due to their indigenous roots. But in the aftermath of the war, under the Treaty of Guadalupe Hidalgo, Mexicans residing in the acquired territories were offered U.S. citizenship, a privilege extended only to whites at the time. These conflicting scripts that simultaneously marked them as legally white but socially and culturally “other” and inferior would serve to complicate their status for generation to come (24).

Molina illustrates a perfect example of how even though Mexicans were deemed U.S. citizens or white, Mexicans were still treated poorly due to differences such as, culture, language, and religion. Mexicans were turned into outsiders in what had once been their own land; they were “othered.” Othering is the process of othering, in America, is a social construct (invention). As a mechanism of control, the other is always juxtaposed against those in positions of power as a way for those same hegemonic forces to maintain authority through exclusionary practices. Mexicans were not the only victims of this process but also other minority groups such as, Japanese Americans, Native Americans, and African Americans.

During the film and panel discussion, it had been mentioned that historical events, such as, Executive Order 9006 had been briefly discussed in U.S. history. In addition, documentary photographers and photojournalists, such as, Dorothea Lange and Ansel Adams were hired by the United States Government to photograph the “joy” and “satisfaction” Japanese Americans were having in the internment camps.

However, as most of the photos depicted the horrible conditions they were living in, almost all of Lange’s photos were impounded and discreetly deposited in the National Archives, where they remained, largely unseen and unpublished, for decades. Occurrences such as these are known as the master and counter narratives. The master narrative can be described as histories, stories, and legends of settlers in positions of power that are passed down from generation to generation, in order, to maintain a central control over what society imagines as common knowledge. On the other hand, the counter narrative can be defined as a critique of the anecdotes, culture, and myths from positionalities of people who have been historically excluded from such institutionalized knowledge. As African-origin peoples were first of many civilizations to endure the repercussions of the master narrative, Saidiya Hartman’s novel, Lose Your Mother: A Journey Along The Atlantic Slave Route, perfectly illustrates their experiences and challenges. Hartman utilizes her positionality through exploring the depths of Ghana and analyzes how slavery has perpetuated its way into modern society.

According to Hartman: Slavery had established a measure of man and a ranking of life and worth that has yet to be undone. If slavery persists as an issue in the political life of black America, it is not because of an antiquarian obsession with bygone days of the burden of a too-long memory, but because black lives are still imperiled and devalued by a racial calculus and a political arithmetic that were entrenched centuries ago. This is the afterlife of slavery-skewed life chances, limited access to health and education, premature death, incarceration, and impoverishment. (6) This quote perfectly chronologizes the outcome of slavery from the beginning to today. Hartman discusses how the social hierarchy has been permanently tainted because of slavery. As African-origin peoples continue to strive against negative perceptions, they also obtain the subjection to recreate their forgotten past, memories, and culture that was forcibly taken from them. Hartman states:

In every slave society, slave owners attempted to eradicate slave’s memory, that is, to erase all the evidence of an existence before slavery. This was as true in Africa as in the Americas. A slave without a past had no life to avenge. No time was wasted yearning for home, no recollections of a distant country slowed her down as she tilled the soil, no image of her mother came to mind when she looked into the face of her child. (155) This quote is an accurate representation of what, not only, African-origin peoples encountered but also Indigenous peoples. Both were required to deliberately ignore and abandon the lives they had previously known so well. Once slaves had forgotten their homes, families, and culture, they were not living but more so surviving.

And Then They Came for Us. (2019, Nov 23). Retrieved from https://studymoose.com/and-then-they-came-for-us-essay 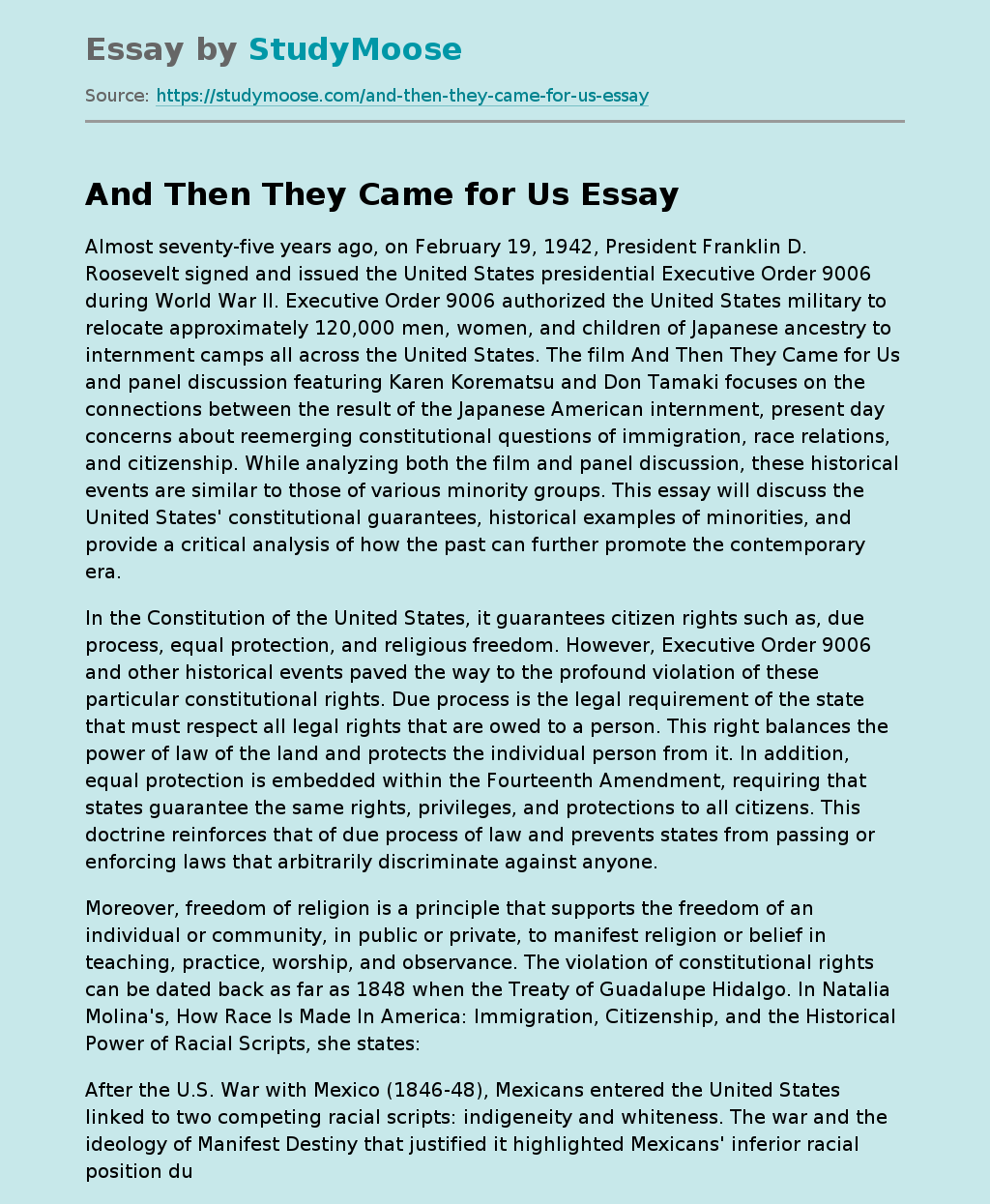