Walter J. Paulits’ 1970 essay on Young Goodman Brown is an attempt on his part to discuss both ambivalence and temptation within the context of Hawthorne’s classic work. Paulits maintains that Hawthorn employs ambiguity to arrive at his theme of moral ambivalence in the work. He considers the theme of Goodman Brown to be ambivalence. The story, published in 1835 and set in Colonial America of the Seventeenth Century, has multiple themes. There is an obvious thread of ambivalence that runs through the work but that same motif can be found in many great stories.

The themes of Puritanism as a inducement to distrust others, fomenting suspicion among neighbors and the idea that not everyone looks at sin in the same way seem more pervasive than simple ambivalence. Paulits’ essay fulfills its purpose, which is to show the ambivalence written into this classic work by a major American writer, however he seems to have missed the substance while grasping at the shadow and has overlooked the major theme, which is that even apparently upright people can harbor secret vices.

He is, nonetheless, effective in his efforts and has proven his thesis that Young Goodman Brown is an allegorical presentation of ambivalence by showing all the ways that Goodman Brown was ambivalent in his feelings about generally everything in this short story (Paulits 578). Paulits says that Goodman Brown is allegorical and can be read as one might read a gospel story, referring to the frequent allusions to biblical symbolism. Specifically Paulits refers to the temptation of Christ in scripture (579).

The major difference in Goodman Brown and the gospel is that Brown is torn between his desires.

He wants to accompany the devil and he wants to stay at home with his new bride. He is, therefore ambivalent in his feelings. But then ambivalence is found in virtually every aspect of daily life. Does a man want to stop off from work and have a beer with his friends or hurry home to his wife and children? The answer seems to be that he would, occasionally chose both if possible. The idea that ambivalence is pervasive in Hawthorne’s story is virtually a given; as to whether or not it is the theme of the story is subject to debate.

Paulits says that the ambivalence is manifested at the very beginning of the story in young Brown’s mixed feelings toward the devil and his new bride. Paulits then says, “Neither has Brown given himself to the devil nor is he leaving Faith [his wife] definitively. ” He correctly points out that in a Puritan society, Goodman Brown’s flirtations with the personification of evil makes little sense theologically, for with proof of a living devil come proof of a living god. Where is the wisdom then in siding with the creation in lieu of the creator?

Nonetheless, what is told is that Brown leaves his wife and sallies forth into the woods to witness a rite of evil, though Paulits calls it a ‘ highly tentative venture’. He points out that the tentativeness of this decision is important in the theme of the story for it reinforces the ‘emotive ambivalence’ found in Goodman Brown. Paulits then begins to indicate the allegorical aspects of the story, pointing out the allusion to the temptations of Christ found in the bible.

The flaw in Paulits’ logic seems to be that Christ, though tempted three times by Satan, was never ambivalent about anything, and certainly did not consider accepting anything the devil had to offer him. So Paulits’ thesis is that the theme of this story is ambivalence, but he then uses an example of allegory that contains no ambivalence. Hawthorne relates that Brown is firm in his resolve all during the time that he has left his wife and is in the company of the devil. He only hesitates when he believes that Faith is a member of the coven of evil.

It is at this point that his ambivalence begins and his own faith wavers (Hawthorne 4). Paulits brings up a quotation from the book of Matthew, saying, “It is the Lord, your God whom you will adore,” (Matt. 4:10 as quoted by Paulits 579). He says that this is the point in scripture that Christ loses his ambivalence and becomes so certain that the Lord sends angels to minister to him. The book of Matthew appears to show that Christ is certain from the first temptation offered to him. He has no ambivalence at any time. Goodman Brown is deceived by the devil from the very beginning of the story; Christ was not ever deceived.

. Paulits covers this discrepancy by saying that young Brown finally emulates Christ after getting over his ambivalence, but that seems a specious argument, and he either emulates Christ or he does not. If this part of the story is to be taken as biblical allegory it should be all or nothing. Paulits is correct in saying that Brown is full of ambivalence even on his flight through the forest with the devil. It is not until he believes that his wife is in league with the devil that he commits. As Paulits points out, as he is on his way to the initiation he is not an initiate and not in league with any evil.

Hawthorn gives the reader the impression that Goodman Brown is whipped into a veritable frenzy of zeal and emotion and is not thinking clearly (Paulits 580). Paulits calls it ‘standard moral dictum’ that passion alleviates the gravity of moral fault. He then quotes Hawthorne that “Brown is ‘maddened with despair’ and ‘still rushing onward with the instinct that guides mortal men to evil. ’” This is hardly justification and not the standard moral dictum of most modern religions. Does Paulits mean that what a man does out of passion is just an ‘oops’? Brown is a Puritan.

It is doubtful that his religion permits him to stray morally and then utilize the old ‘heat of passion’ defense. The devil succeeds initially in confusing Goodman Brown as to what is actually right and what is wrong. This motif seems to have been prevalent in the beliefs of the actual Puritans. Christians are admonished not to judge others, yet Hawthorne relates that Goodman Brown’s grandfather whipped a Quaker woman through the streets for some offense (Hawthorne 2). Puritans would likely think that was acceptable behavior while the law would consider it assault and other cults and sects might consider it sin.

There is no universal consensus and each group believes it is morally upright. The devil offers Brown two choices and he commingles them. However at the last second he blanches and refuses both. It is at this point that Brown admonishes Faith to resist the evil one and he suddenly finds himself alone in the forest. Brown is left to wonder if the night’s events are hallucination or dream as is the reader. Hawthorne lets the reader decide what he or she wishes to believe. As the story plays out Hawthorne describes Brown as a bitter unhappy man who dies miserably after an unfulfilled life.

If Paulits is correct that the overriding central theme of this story is pervasive ambivalence why does Hawthorne end it in the forest and not play it out to the end of the tale? Paulits’ thesis sets out to prove that ambivalence is a theme and he does that effectively. He does not effectively prove that ambivalence is the central theme or even the main theme, however. His idea that the allegory is of the temptations of Christ is weak and not supported well. A better argument could be made that allegorically Goodman Brown represents Adam and the forest is a representative of Eden, where the serpent comes to test the will of humanity.

In the end it has to be admitted that he succeeds in that which he sets out to do and effectively proves his thesis. However it begs the question and is petitio principii to accept that the basis for his thesis is correct. Works Cited Hawthorne, N. Young Goodman Brown 1835 The Literature Network Retrieved 5-26-07 from: http://www. online-literature. com/hawthorne/158/ Paulits, W. Ambivalence in “Young Goodman Brown” CITY OF PUBLICATION: NAME OF PUBLISHER YEAR OF PUBLICATION 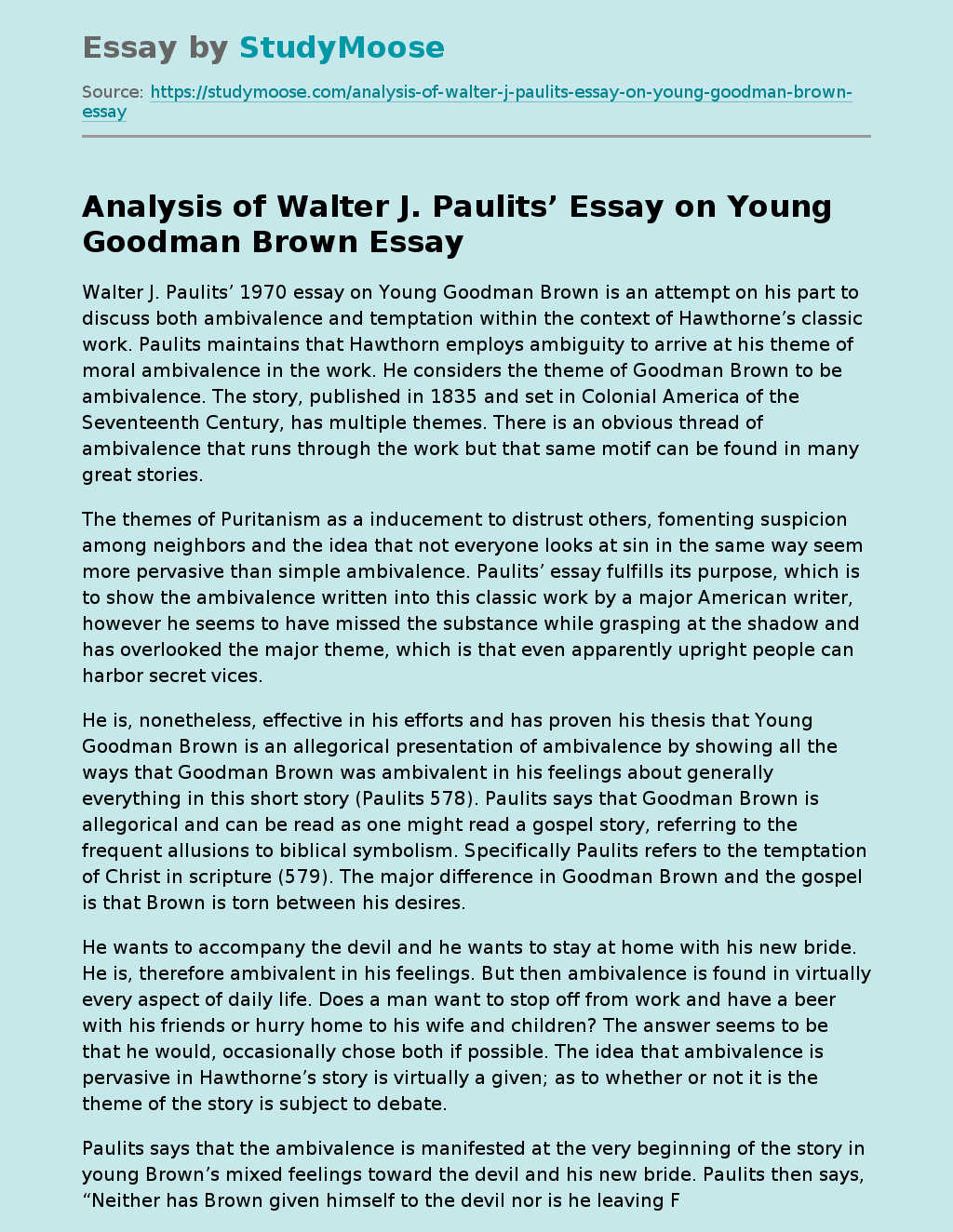