Analysis of the story "Shakespeare in the bush"

In the story Shakespeare in the Bush, author Laura Bohannan has an argument with a friend about the interpretation of Shakespeare’s literature. Her friend stated that Shakespeare was “a very English poet” and that people of other cultures could certainly misunderstand his literal meanings. The author then argues that the plots and motivations of Shakespeare’s tragic plays will always be apparent because human nature is more or less universal through out the world. She does however take into account that the customs and translation of his works could produce slight differences in their interpretations.

Turn in your highest-quality paper
Get a qualified writer to help you with
“ Analysis of the story “Shakespeare in the bush” ”
Get high-quality paper
NEW! AI matching with writer

The argument remained a stalemate as she was preparing to travel to Africa. Her friend gave her a copy of Hamlet as a parting gift with hopes that perhaps she would find the true interpretation. On her trip to Africa the author finds out that custom, translations, and culture play a larger role in the interpretation of Shakespeare and that his meanings were not as universal as she previously thought.

During her stay with the Tiv in Africa, Bohannan gets a chance to relay the story of Hamlet to the tribe. She began the tale with the appearance of Hamlet’s fathers ghost. Right away the elder questioned this. The concept of someone having a ghost or living after they die was very foreign to them. They were convinced that the author had gotten the story wrong because the only explanation for a spirit could be that it was an omen sent by a witch.

Horatio was also viewed as a fool for not bringing such an important matter before a person with proper knowledge of such omens. The Tiv’s perspective was that hamlet this matter should have never been brought to Hamlet’s attention. It is obvious that their customs and traditions were already biasing their interpretation of the story. If Hamlet were not informed of this “omen” he would have never sought revenge for the death of his father, thus changing the plot dramatically.

Another major complication with the story the Tiv had, was Hamlet’s uncles’ succession to the throne. In Tiv society it is only natural for the brother of the chief to become chief in the event of his brothers death. The Tiv also commended the speed with which Hamlet’s mother remarried after the death of her husband. A wife of one of the elders overheard this part of the story and explained that a quick remarriage is ideal. She stated that without a husband the farm would not be cultivated, therefore a quick remarriage was essential so that lack of food would not occur. It was obvious to the Tiv woman that the mother had done this in the best interests of the family so Hamlet had no reason to feel negatively about it.

The author tried in vain to explain why these things would make Hamlet miserable. Fear of famine was not on the mind of Hamlet’s mother for she was powerful enough not to rely on her husband for food. Western society would view this remarriage as a form of incest and would not be socially acceptable. Also a mourning period would be expected before a widow could be remarried and this was not done. In the elders minds these were normal events and which should not motivate anyone to be depressed. This proves that the authors’ argument of motivation of the greater tragedies being clear everywhere is flawed.

The Tiv elders had many explanations for the behavior of Hamlet, which held the authors interest. They all agreed that Hamlet was being bewitched and this was the cause of his strange behavior. They clarified that only a male member of ones family had the power to bewitch people therefore it was clearly king Claudius who was behind this. The Tiv also had an explanation for he supernatural events that occurred. They believed the presence of his fathers ghost was understandably an omen sent by a witch to Hamlet to tell him the truth of his father’s death while trying not to offend the current king. Although these answers were not the same the author viewed she found them fascinating and she modeled the remaining parts of the story around them. Bohannon was learning that the Tiv culture and belief systems did not allow the storyline to progress in the same way as Shakespeare wrote it.

After hearing of the death of Ophelia from the author, the Tiv elder wished to know whom her male relatives were in order to find who was responsible. Upon hearing that Laertes, Ophelia’s only living male relative, had returned from France the elder was bold enough to offer his prediction for the end of the story. He proceeded to tell how Laertes was scheming to get money to pay off his debts. According to the elder, Laertes had bewitched his sister in order to sell her body to the witches. The Author protested to this by saying that the body was in fact buried and Laertes had jumped into the grave and was followed by Hamlet.

The elder then concluded that Hamlet had jumped in after him to prevent Laertes from snatching the body. He continued to say that the son of a chief would not want to see another man to become rich and powerful. He said Laertes would be angry with this and try to kill Hamlet. Bohannan had to agree with this although it may not have been exact; Laertes did wish to kill Hamlet. Perhaps the elder’s abstract interpretations of the story had led him to universal conclusion after all. In his own eyes, the elder understood the meaning of the story correctly even though his thoughts did not match with the authors.

After the stories conclusion the elder added his thoughts about the tales finish. The poison beer that killed Hamlets mother was obviously meant for the winner of the fight. According to him if Laertes won the duel, the great chief would have given him the poison. This way no one would no that the king arranged Hamlets death. In addition the elder claimed that the chief would have done this also for fear of Laertes witchcraft. Someone who kills his own sister with witchcraft is potentially very dangerous. Very pleased that he had correctly interpreted the story, the elder told Bohannan that she should tell them more stories from her country. The elders would then instruct her about the true meaning of the stories so that she could return home unlighted by their wisdom. The Tiv felt that the author was the one

Reexamining the argument, which fueled this story, it is clear to see that the author’s friend was correct. The difference in culture had a large impact on the interpretation of Hamlet. The argument Laura Bohannan presents is flawed. Even though the Tiv elder was able to loosely predict the outcome of the story, Bohannan failed to prove that the plot and motives of Shakespeare’s great tragedies were universal. The Tiv had very different rationalizations for the plot progression and the character motives. The author did not take seriously enough the enormous impact the Tivs different customs and traditions would have on their analysis of Hamlet. Through out this story you can see that human nature does plays no part in the Tivs interpretations of Hamlet. The author learns that culture is the main reason for these differences of opinion. Taking into account the cultural differences of the author, her friend, and the Tiv it seems clear why they would interpret Shakespeare in very different ways.

Analysis of the story "Shakespeare in the bush". (2016, Jun 22). Retrieved from https://studymoose.com/analysis-of-the-story-shakespeare-in-the-bush-essay 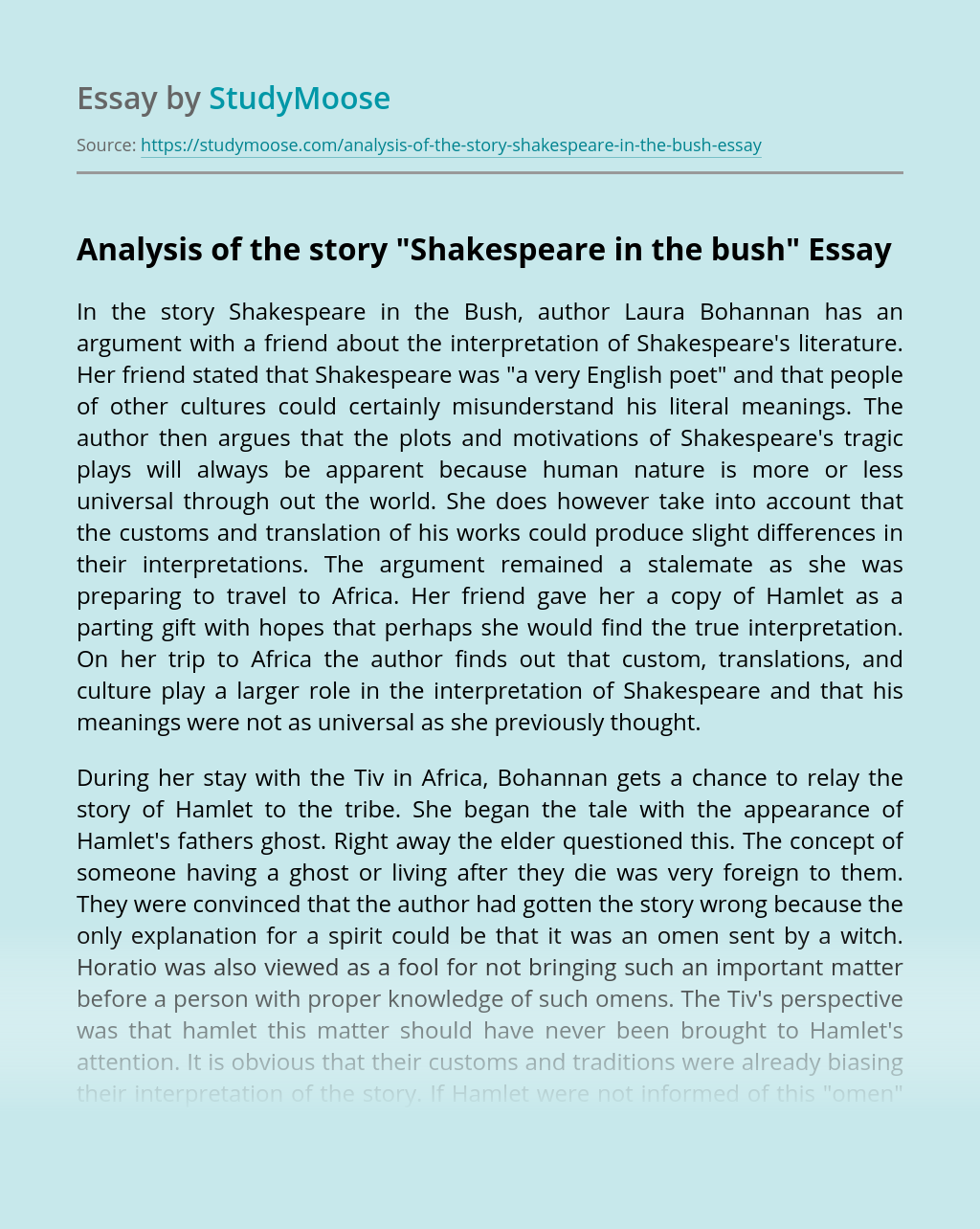 Turn in your highest-quality paper
Get a qualified writer to help you with
“ Analysis of the story “Shakespeare in the bush” ”
Get high-quality paper
Helping students since 2015
Stay Safe, Stay Original