Analysis Of Setting In "The Lottery"

Analysis of Setting in “The Lottery” Setting, the time, location, and objects in which the events of a literary work occur. This important factor is needed to help the reader familiarize himself with what he is reading. Many writers use setting to “establish a realistic background, transport us to strange and exotic places, or even to create a certain mood” (Paschal 4). For example, setting as described in “The Lottery” is a small present day town on a clear and sunny summer day.

Don't use plagiarized sources. Get your custom essay on
“ Analysis Of Setting In “The Lottery” ”
Get custom paper
NEW! smart matching with writer

Shirley Jackson makes this known because it sets the mood in the beginning for the ironic turnaround at the end. With her intent to shock the reader she uses key points the first of such is the time period that the story takes place.

Jackson’s story takes place during the beginning of summer right around the time that school is let out for summer recess. Second is the location of the lottery. She has the drawing held in the middle of town, the same place that they hold all of there family events.

Third would be the actual black box that they put the ballots in, she uses this as a symbol of tradition. Jackson’s brilliant use of setting ironically shows her intent to instill shock in the minds of her readers.

As we study further into the setting of Jackson’s “The Lottery” we come to the first key point which is the time period that the story takes place. Jackson states that it is June 27th, which can be associated with the summer solstice, or the longest day of summer.

This day has also been known to have ritualistic overtones. The year is left open to give the reader the sense that the story is current. The time is set at around 10:00am and it says that the flowers are blossoming and that the grass is richly green (Paschal 124).

This is to give the reader a feeling of serenity as Jackson wants the reader to feel as if this were an ideal town on an ideal day. She sets a time frame for the actual lottery to occur. Since the lottery last approximately two hours it must start at 10:00 so that they can be home in time for noon dinner (Paschal 124). This gives the reader the idea that this event is a common ritual and that they have a set schedule to go by. All of this sets the reader up for the ironic twist at the end of the story. In a sense Jackson uses this ideal town as a camouflage to hide her true intent.

The next of Jackson’s key points is the actual location of the lottery. She sets the lottery in the middle of town between the bank and the post office (website 1). This part of town is know as the Town Square and is the place where they hold most of there family activities (Paschal 124). Since the story is set in broad daylight you can visualize all the families congregating like one would for a local community picnic. It says that the children are breaking in boisterous play and the men are talking about planting and rain, tractors and taxes (website 1). The buildings that Jackson uses are symbolic and put across a strong message. The bank is a symbol of wealth or money, while on the other hand the post office is a symbol of government. One could say that the point being made here is that she uses these symbols in correlation with the lottery to say that whenever money and the government are involved there is corruption. At this point in the story Jackson would have the reader to believe that a town that appears to be so normal couldn’t commit such an unthinkable action at the towns’ family meeting place in broad daylight.

The third and final key point used is the black box. Jackson uses this as a symbol of many things, one being tradition. The box is described as being shabby, splintered, faded and even stained (Paschal 125). This symbol of tradition clearly shows how this society or culture is afraid of change. Not only does the black box symbolize tradition it symbolizes fear. As the box is introduced in the story it changes the mood of the people. Jackson states that as the box is placed on the stool, the villagers kept there distance (Paschal 125). “The box embodies all of the evil acts executed in the past and the ones to come” (website 2). One would think that if they were so afraid of this box why not make another one or even do away with the ritual completely. Perhaps their fear of change is stronger than their fear of fear itself. To these people the black box holds the key to life and death. Jackson’s use of the black box as a symbol demonstrates shock in that the people of this society would rather hold on to a greater evil rather than loose a lesser one.

As noted above in the analysis of setting in Shirley Jackson’s “The Lottery” we found that setting can be an important factor in any story because it sets an atmosphere that the reader can use to explain certain events within a story. For example, in Steven Cranes “The Bride comes to Yellow Sky” the setting is in what is known as the Wild West. Without the reader knowing this they wouldn’t be able to relate to Scratchy wearing cowboy clothes and shooting his guns in the bar. Another example would be in William Shakespeare’s Macbeth in which Shakespeare uses medieval Europe as the setting. Without knowledge of this you wouldn’t be able to explain why people would kill there own relatives just to gain power, or to even explain why it was common practice to consult a witch for advice. For some that was a common thing for people of Europe in that time period. In essence the appropriate use of setting to illustrate a writer’s intent in a story can be an effective way to have ones reader be able to relate to what he is reading.

Analysis Of Setting In "The Lottery". (2016, Jul 14). Retrieved from https://studymoose.com/analysis-of-setting-in-the-lottery-essay 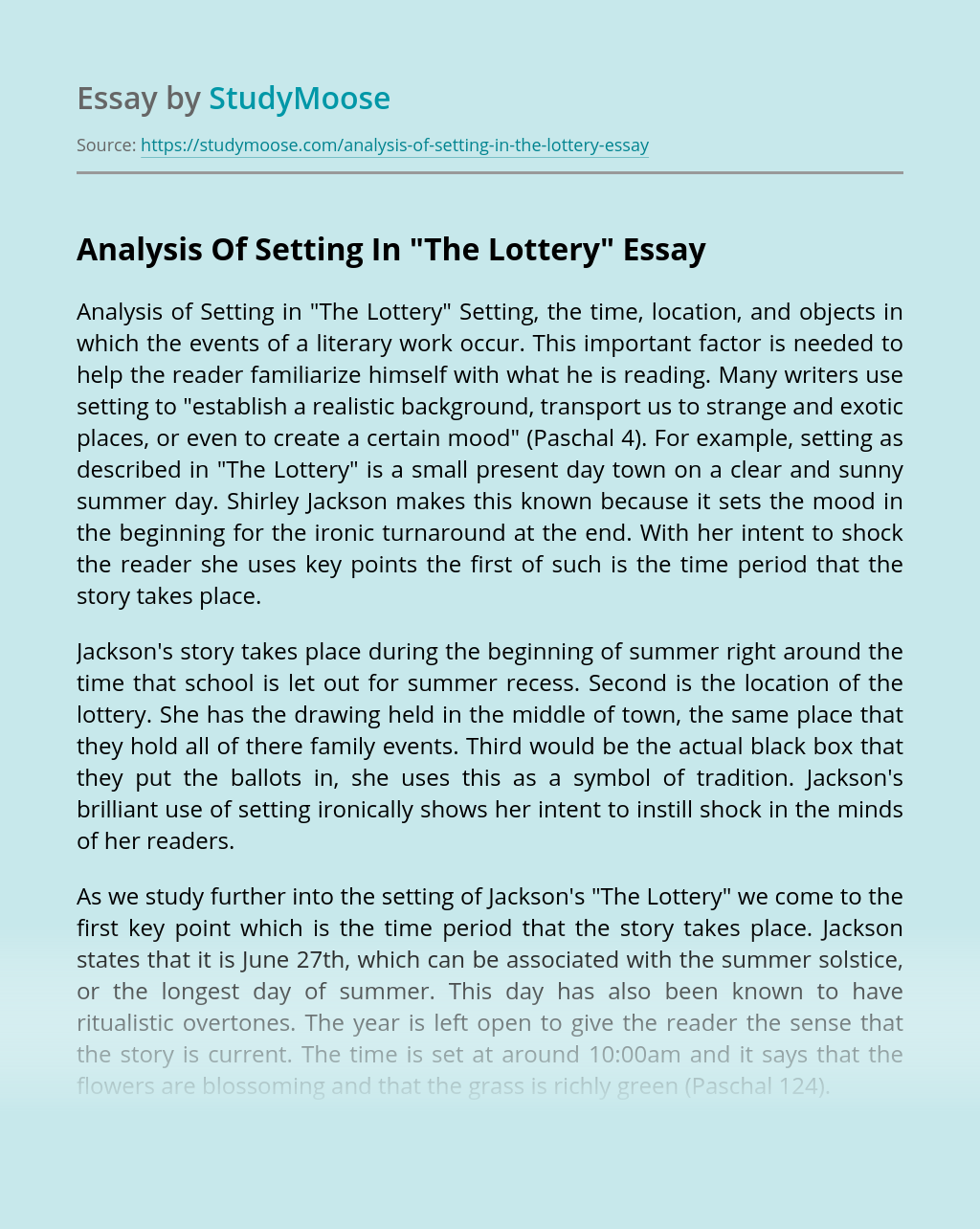