Analysis of My Summer Reading

William Golding’s novel, Lord of the Flies, tells a story of young boys stranded on an island with no adults. They go through many different obstacles through the story and without adults around the boys lose their innocence. In Everything I Never Told You, written by Celeste Ng, a sixteen-year-old named Lydia is found dead in a lake. Her family is left with many unanswered questions and are left to unravel them. While trying to cope with Lydia’s death, the Lee family all struggle with their own identities.

Don't use plagiarized sources. Get your custom essay on
“ Analysis of My Summer Reading ”
Get custom paper
NEW! smart matching with writer

Sylvia Plath’s The Bell Jar, tells the story of Esther Greenwood, a college student whose dream is to become a poet. She is given the chance to do an internship in New York as a guest editor of Ladies’ Day magazine, but as she spends more time in New York, the more she struggles with her identity. Lord of the Flies takes us on a journey and we see all the boys lose their innocence and identity, some faster than the others.

Some boys become complete savages, they hunt and kill animals, tie the younger kids up and beat them, and it even got to the point where they killed two of their own. In chapter five, it says, “The world, that understandable and lawful world, was slipping away.”

The boys cannot keep order, they are little kids with no adults to guide them at all and this turns out to be a dangerous thing for them. They begin to kill, and attack, they don’t care about the good of society.

In Everything I Never Told You, each family member struggles with their own identity, but most of all, James Lee. His Asian identity is an internal conflict he deals with every day. In chapter two it states, “He began to make small changes he thought she might like: he trimmed his hair he bought a blue-striped Oxford shirt after she admired one on a passerby.” People like Marilyn’s mother doesn’t even acknowledge him. James begins to believe these things people say about him and begins to change himself for what they want him to be and not what he wants to be. His identity is very unknown to him and the audience as well and that could be a serious problem. In The Bell Jar, Esther’s inability to recognize herself and continuously lying about her true identity shows that she has lost all sense of who she is. In chapter one, Esther says, “It was so dark in the bar I could hardly make out anything except Doreen. With her white hair and white dress she was so white she looked silver. I think she must have reflected the neons over the bar. I felt myself melting into the shadows like the negative of a person I’d never seen before in my life.” Esther describes how unnoticed she feels in social situations. All eyes are on Doreen and not Esther, also, in chapter two Doreen and Lenny act as if Esther doesn’t exist which also leads Esther to believe this herself. She sees herself not from her own eyes, but others. Each of these books has taught me something different. In Lord of The Flies, we see these boys lose themselves and this has taught me that without your innocence and identity you will be lost. Everything I Never Told You, taught me that it is important for you to accept who you are and stay true to yourself because in the end, you might do something you regret.

In The Bell Jar Esther suffers from mental illness but she is more than that. This book taught me that you are always more than what you think you are. You are extraordinary no matter what. My thinking about identity has been confirmed. I’ve always thought that you have to go through something traumatic to finally know who you are. In each of these books the characters deal with different situations that molded them into the people they will be in the future. You can’t just flip through a catalog and pick who you want to be, you have to go on a path of many ups and downs to finally figure yourself out.

Analysis of My Summer Reading. (2021, Feb 04). Retrieved from http://studymoose.com/analysis-of-my-summer-reading-essay 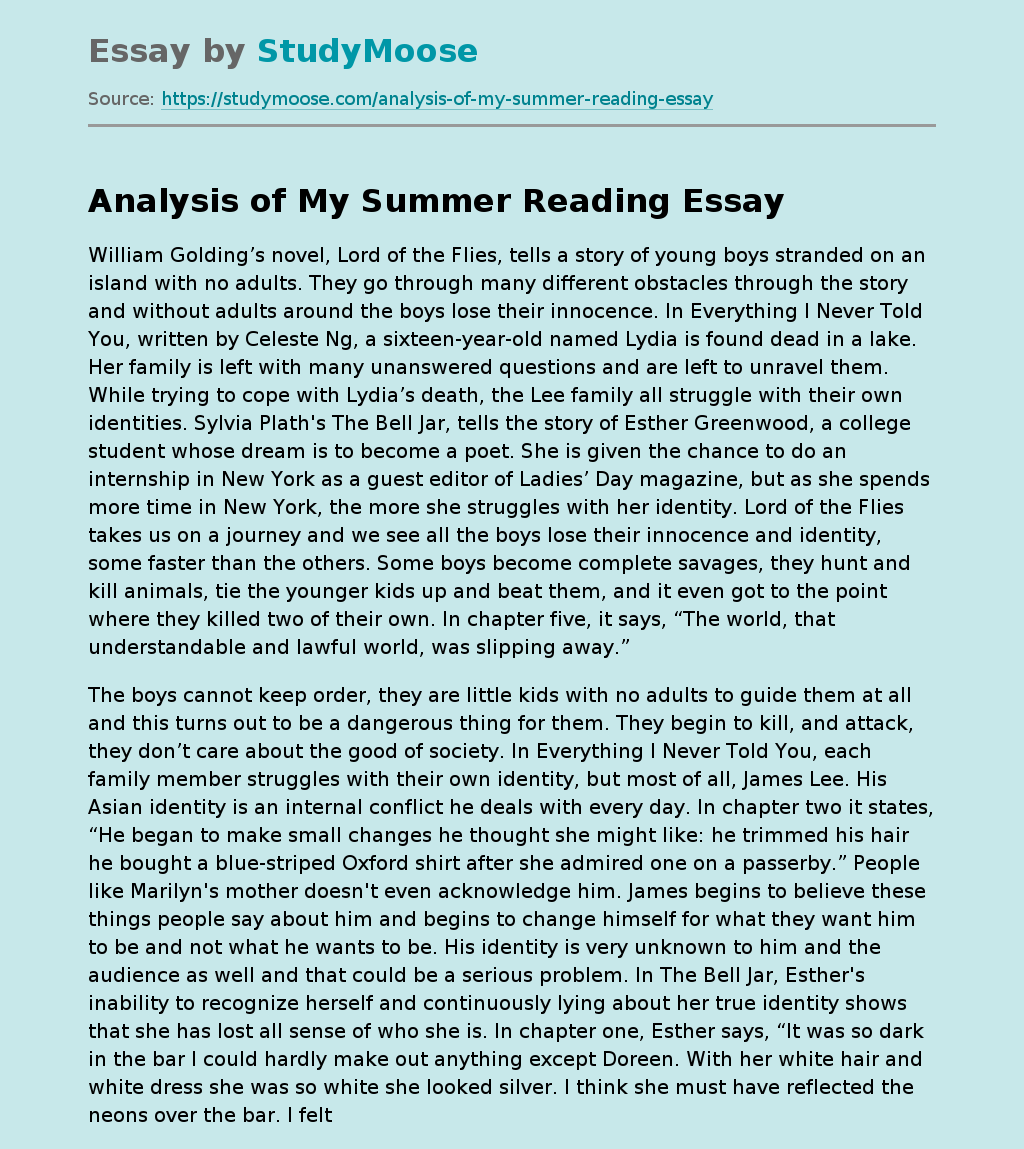