Summer Heights High is a show based on a public school education using both the positives and negatives in all forms of comedy. The show is based around three individual and extremely unique characters: Jonah Takalua, an early developed Year 8 student with very little intelligence or consideration due to the way he has been raised. He uses the fact that he is of Tonga descent to mess with teachers and students, causing distractions and disturbances in both the classroom and the playground.

Ja’mie King; A private school girl in year 11 who has stepped out of her comfort zone and participated in a 10 week swap with an “Asian” year 11 girl who is enrolled in Summer Heights High. Mr G; An outgoing, sophisticated Summer Heights High “Music Teacher” who is extremely passionate about his job and the conditions in his workplace. Mr.G. has a high level of confidence and strives to build the confidence and enthusiasm of each student and teacher he is involved with.

Each of these three characters is played by actor Chris Lilley who perfectly executes the individual personality of each character. The structure of the series involves a detailed and inside look on all the perspectives and situations faced by the three characters. This particular series mocks both the public school education system and the personalities of the three main characters and the people they are associated with. This creates a satirical plot, but due to the regular use of comedic values it falls under the category “comedy”.

The breakdown and analysis of the series Summer Heights High reveals the level of sophistication and intelligence, as long as specific thought paths which have been used to create an overall hilarious, realistic life situation which never seizes to amuse its audience. Not only does this show include classic situation comedy features, it has been structured slightly differently to an average sitcom in an effort to better relate to the audience and acknowledge the full comedic perspective on all situations. The following generic features listed contribute to both the success and structure of the series: The perspective on Public School education: This feature has been used as a comedic device which opens up the viewer’s mind by using social, economic and diversity involved in public schools’ which plays an important role in creating an interesting story line and terrific journey. Dilemmas characters face both personally and professionally: Each of the three main characters is faced with several dilemmas over the 6 episode series both minor and major which triggers audience’s eagerness and attention. These dilemmas may be as simple as writing dictation on a wall and having to clean it off or it could be the failure of an entire school musical…

Stereotypical teachers: A student’s perspective on teacher’s characteristics and attitude has been applied to both Jonah’s teacher and behavioural manager. Ja’mie’s opinion on her teacher also represents a stereotypical situation which involves daily flirting and classroom distractions. This offered a unique connection point with the audience not only relating to them, but also exploring their perspectives. This contributed to a boost in success in the series, because it peaks the audience’s attention and involvement with the series.

REPRESENTATIONS AND STEREOTYPING OF CHARACTERS AND THEIR LANGUAGE:

Character Jonah Takalua has been created purely on the stereotypical big bully who is extremely unintelligent and in some cases can be of Indigenous background due to the early development or larger build. Jonah’s language is extremely inappropriate and is used regularly to portray his attitude and dominance, although when it comes to school work or a situation where intelligence is required he will do anything to avoid or do the bare minimum. Stereotypically Jonah is top of the food chain and whatever he does students must accept or they will be faced with physical or verbal punishment. Ja’mie King is a stereotypical snobby private school student who has a very high opinion of herself and follows the moral “that her way is the right way”. Not only this but Ja’mie’s character is quite hormonal and inconsiderate which Year 11 girls have gained the stereotype as. Stereotypically Ja’mie’s quest involves popularity, superiority and attention, interest that apply to all year 11 girls. Not only this, but in the series Ja’mie demonstrates acts of individuality to supply some type of self-accomplishment. Mr G is favoured among students for being an outgoing, socially bright person who avoids theoretical work and focuses more on the practical side of life and his courier. Mr G is portrayed as a stereotypical teacher who has very little interest in teaching along the lines of the curriculum he prefers his own methods which involves him performing for the children or getting the students to step out of their comfort zone. Stereotypically Mr G is a teacher who did not succeed in their lifelong dream, which lead to him creating a learning environment based off the dream and inspiration.

THE PROGRAMS APPEAL TO ITS TARGET AUDIENCE:

This program has been based off the social structure of public school education and how students fit in to serve different purposes. This suggests that the show would mainly target students attending school from year levels 8 to 12. Although, this series also appeals to anybody with a relation to school education (parents and teachers). The main concepts which appeal to the target audience would be the comedic devices, setting and plot all of which spike interest in the audience and maintains there attention throughout the series. Character Jonah Takalua applies and relates to all teenage boys attending high school due to his entertaining behaviour and wide vocabulary. Ja’mie King spikes the interest in teenage girls due to her unique personality and stuck up attitude which not only makes her popular, but also is responsible for some of the horrible dilemmas Ja’mie faces. Mr G is an all-round character who makes everybody laugh and triggers the wacky instinct in people’s sense of humour and perspective on life. The audience absolutely loves this character, because he is so entertaining and there is never a dull moment while he is on the screen. Mr G relates to anybody with a sense of humour and is able to connect with each audience member individually just by his incredible comedic values and importance in the series.

MOVEMENT TO OR FROM FREE-TO-AIR AND PAY TV:

This series consists of 8 episodes due to this it was only exclusive on free TV which created a large demand for the series to be sold on DVD which lead to great success. Summer Heights High was on TV once a week for an eight week period. The series was available for the public to view on ABC 1 during the years 2007 and 2008. Soon after the series had come to an end on free-view TV it was released on DVD which increased the profit and popularity of the series.

THE ROLE OF POTENTIAL ADVERTISERS FOR THE TIME SLOT AND/OR AUDIENCE:

Potential advertisers have to acknowledge the target audience that will be viewing Summer Heights High and the strategies they will need to influence them. It is important that they alter the advertisement so it can relate to the audience and have some importance in their life. The potential advertisers must consider how long they will maintain the attention of the audience and what they must do to create a business opportunity. Under these circumstances the advertisers created quick advertisements focusing on action or comedic devices to promote the product and spike interest. The ideal advertisement to fit in the time slot would have to either target teenage school students, parents or teachers. Businesses such as “Wet ‘n’ Wild”, “Underage Events” and other social establishments would be ideal to target teenage school students and also get the message across to their parents. A wide range of businesses could promote their products in the time slot to target parents, but the ads still need to be quick and direct.

Summer Heights High is an incredibly unique and entertaining series that has been incredibly successful, perfectly executing relating to the target audience. 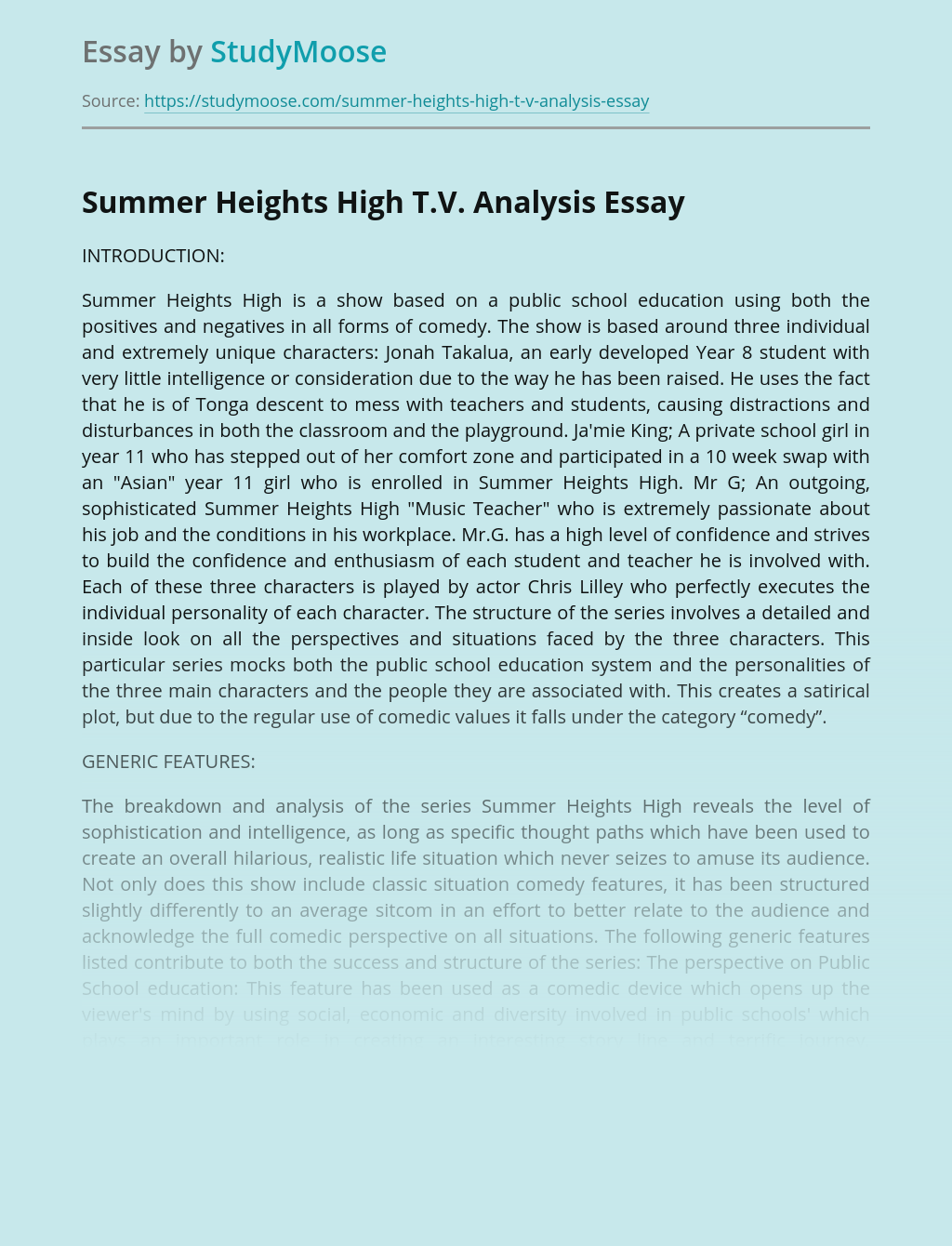 Rate this post “Homecoming Queen” redirects here. For the thoroughbred racehorse, see Homecoming Queen (horse). Homecoming is the tradition of welcoming back alumni of a school. It most commonly refers to a tradition in many universities, colleges and high schools in the USA. It usually includes activities for students and alumni, such as sports and...

Rate this post The Use of Pass/Fail System The only thing that will give you as much heartache in school as love are grades (Colaba, n.d.). Throughout a student’s life in school, one is taught from society that the most important aspect in studies is to get good grades. Because of this, students’ motivation, learning,...

Rate this post In order to decide whether or not to keep the Craddock Cup, we needed to classify the expenses as either fixed and sunk or variable, fixed and sunk costs are not relevant so they are not included in the revised statement. Exhibit A shows an income statement that is revised in this...

Should College Student-Athletes Be Paid?

Rate this post One of the biggest arguments these days in the sports world is should college athletes be paid or not. To preserve the competitive nature and the “college environment” student athletes should not be paid. College athletes go to school for a reason, education. Universities or colleges should not have to spend money...

The Last Shot By Darcy Frey

Rate this post Growing up in Coney Island seemed to be no easy task. For many, basketball may have been the only way out. For Russell, Tchaka, Stephon, and Cory it was the way out. It was a way for them to escape the rough environment and the poverty stricken streets that they were forced...

Rate this post Introduction Problem-based, discovery-based, inquiry-based, case-based, and project-based are all examples of best practice learning pedagogies from the constructivist theory framework. The constructivist learning theory is based on the idea that learners construct or build knowledge through active experiences with their subject matter. These types of best practices may be especially useful for...

Rate this post Paulina stayed with her grandmother in Ecuador when she was only six years- old, her parents decided to travel to the United States seeking the American dream. They never imagined that this separation would affect their daughter tremendously. After a few months, Pauline woke up many nights crying and screaming. She was...