One of the primary ways in which we might judge a novel is whether or not we care sufficiently enough for its characters. In Wuthering Heights, Emily Bronte offers us an intriguing array of characters and narrators. There are two principal narrators in this novel which throws into question the authority of the narrator. The conventional narrator confers upon the novel something of an authenticity of a spoken narrative. The presence of the narrator is comforting, since the narrator is by virtue of his or her role, a survivor: the narrator must survive to tell the retrospective tale.

Don't use plagiarized sources. Get your custom essay on
“ Wuthering Heights characters ”
Get custom paper
NEW! smart matching with writer

The narrator has an authority, which is made even more dramatic in nineteenth-century fiction on account of the fact that nearly all narrators are male. It is doubly significant therefore that Bronte chooses two narrators, one male and one female, and that the narrative of Nelly Dean outranks and dispossesses that of Lockwood, the male narrator. Able to read ‘between the lines’ of Nelly and Lockwood’s narrative, the reader is able to interpret information from the text which is never made explicit.

In distinguishing between ‘reliable’ and ‘unreliable’ accounts the reader is able to construct a body of knowledge from which to make judgements about the text and the characters. Equally tantalisingly, Bronte plays with our expectations of characters as discreet and coherent individuals. They extend their influence beyond the grave; they share each others names and moods and they exemplify all manner of contradictions. It is conventional to consider characterisation in terms of identity: what characterises this person?

How can they be identified? One of the key elements of identity might be thought to be the name, yet Wuthering Heights is a novel in which there scarcely seems enough names to go round.

There is a constant doubling of names which repetitiously trace each other through the three generations of the novel. Catherine The reader’s first introduction to Catherine Earnshaw is an introduction to the signature of a ghost; her name is scratched upon the window-ledge in her childhood bedroom, the room where Lockwood will have his disturbing nightmares.

At the end of the novel, Heathcliff is tormented by everything which signals to him his loss of Catherine, she is as elusive and forbidden to him as she is incomprehensible to Lockwood. Thus the characterisation of Catherine starts and ends in an enigma: the world of the novel is testament to her character, but it is testament to a character that can leave only ghostly signs of itself behind. The names which Lockwood finds inscribed upon the window – Catherine Earnshaw, Catherine Linton, Catherine Heathcliff – can be read as indicative of Catherine’s fractured or fragmented social identity.

Catherine struggles with conflicting options for selfhood as she tries to combine two lives: the life of passion fully experienced, and the life of social convention that secures her to either her father or her husband. Her assertion to Nelly Dean ‘I am Heathcliff’ is both dramatic and memorable, but it cannot stabilise her identity since Heathcliff is too enigmatic and uncertain. The conflict that disturbs Catherine’s sense of self is played out in the novel through the themes of culture versus nature. In choosing to marry Edgar, Catherine chooses culture over nature.

This is directly contrasted with a narrative insistence upon her love and oneness with nature. From Catherine’s perspective, nature does not need to be named, and it does not lend itself to narrative representation and culture. If we accept this reading, then Catherine’s choice of Edgar over Heathcliff cannot be expected to be successful. It is, however, in character, for Nelly Dean’s first introduction of Catherine is as ‘mischievous and wayward’, thus we can expect her to make unpredictable and surprising choices.

Capable of great love and fidelity, Catherine is nevertheless also capable of ruthless destruction; even if that entails her death and wretched misery for those she loves. Heathcliff Heathcliff is described by Catherine as an ‘unreclaimed creature’. His mysterious capacity for self-invention which defies the conventional categories of characterisation in the novel renders him profoundly difficult to read for most of the other characters. Unlike every other name in the novel, Heathcliff has the only singular name, which serves him both as Christian and surname.

This places him radically outside social patterns and conventions. Heathcliff belongs first nowhere and last anywhere. The fact that he inherits his name from a dead son also signals the potential for free play and invention, since this name might then be thought of as that of a ghost: a character who is no longer present. Heathcliff is often seen as a Byronic hero: powerful, attractive, melancholy and brutal. Through most of the first volume of the novel Heathcliff’s rise to power details most of the ascension of the romantic hero, with his intrusion into and transformation of a conventional and socially limited world.

However, by making such romantic convention manifest in an energetic new form, Heathcliff actually cancels out romantic possibilities and reduces that system to mere superstition. As a foundling, Heathcliff is introduced into the close-knit family structure as an outsider; he is perceived as both gift and threat and these contesting identifications form part of the compelling undecidability of his character. Contradiction typifies Heathcliff, to Catherine he is brother and lover; to Isabella he is romantic hero and pitiless oppressor; he epitomises potency, yet he fathers an exceptionally frail child.

He encompasses vast philosophical opposites: love and death, culture and nature, evil and heroism. Heathcliff can be read as vampiric and there is evidence of his bloodthirstiness. He disturbs the conventional structure of the novel, and the world created within it. Edgar Edgar represents the world of conventional morality to which Heathcliff is the antithesis. Edgar’s world is an interior world, and we first peep in on him as a child, poetically pictured by Heathcliff for Nelly Dean.

In the midst of his sumptuous environment, the description of which sits so comfortably in Heathcliff’s mouth, stands Edgar weeping by the fire and Heathcliff despises him for his pettiness. The descriptions of Edgar as ‘a doll’, a ‘spoiled child’, a ‘ soft thing’, and a ‘lamb who threatens like a bull’ establish Edgar as artificial in contrast to the elemental description afforded to Heathcliff and Catherine. And yet although there is no way that Edgar can satisfy Catherine, he nevertheless loves her in a conventional way as his wife, and when she is ill, he tends to her devotedly.

It is rather a common place of criticism to read Edgar as effeminate in contrast to the savage masculinity of Heathcliff. Edgar’s masculinity is his social power. He legitimately inherits Thrushcross grange; his books and his library establish him as a man of letters and therefore of influence. Nelly’s constant reference to Edgar as ‘the master’ reveals her opinion of him as someone with social power. Heathcliff on the other hand is a cuckoo with no established parentage or inheritance. His lack of formal education places him in an inferior social position.

Edgar Linton is described as lacking spirit and this can be read in two ways. Conventionally, he does lack the vigour that characterises Catherine and Heathcliff. However, he also lacks their ghostliness, the spectral quality which sets them apart and lends them mystery. He is not troubled by internal contradiction, and he remains in his place throughout the novel, living at Thrushcross Grange as boy and man, and finally resting in his grave alongside the body of his wife. Isabella As Edgar’s sister, Isabella’s characterisation is closely associated with his.

Indeed, she is only ever seen in relation to other characters. Isabella’s infatuation for Heathcliff, which structurally parallels Edgar’s fascination with Catherine, fails to develop into a mature and unselfish love. Isabella’s infatuation with Heathcliff is as a direct result of her cultural life: she can only read Heathcliff as a romantic hero and she never entirely abandons her fantasy of Heathcliff as the Byronic lover even when it is clear that his spontaneous love of Catherine has transformed itself into a determined lust for revenge, for which Isabella is only a cipher or vehicle. 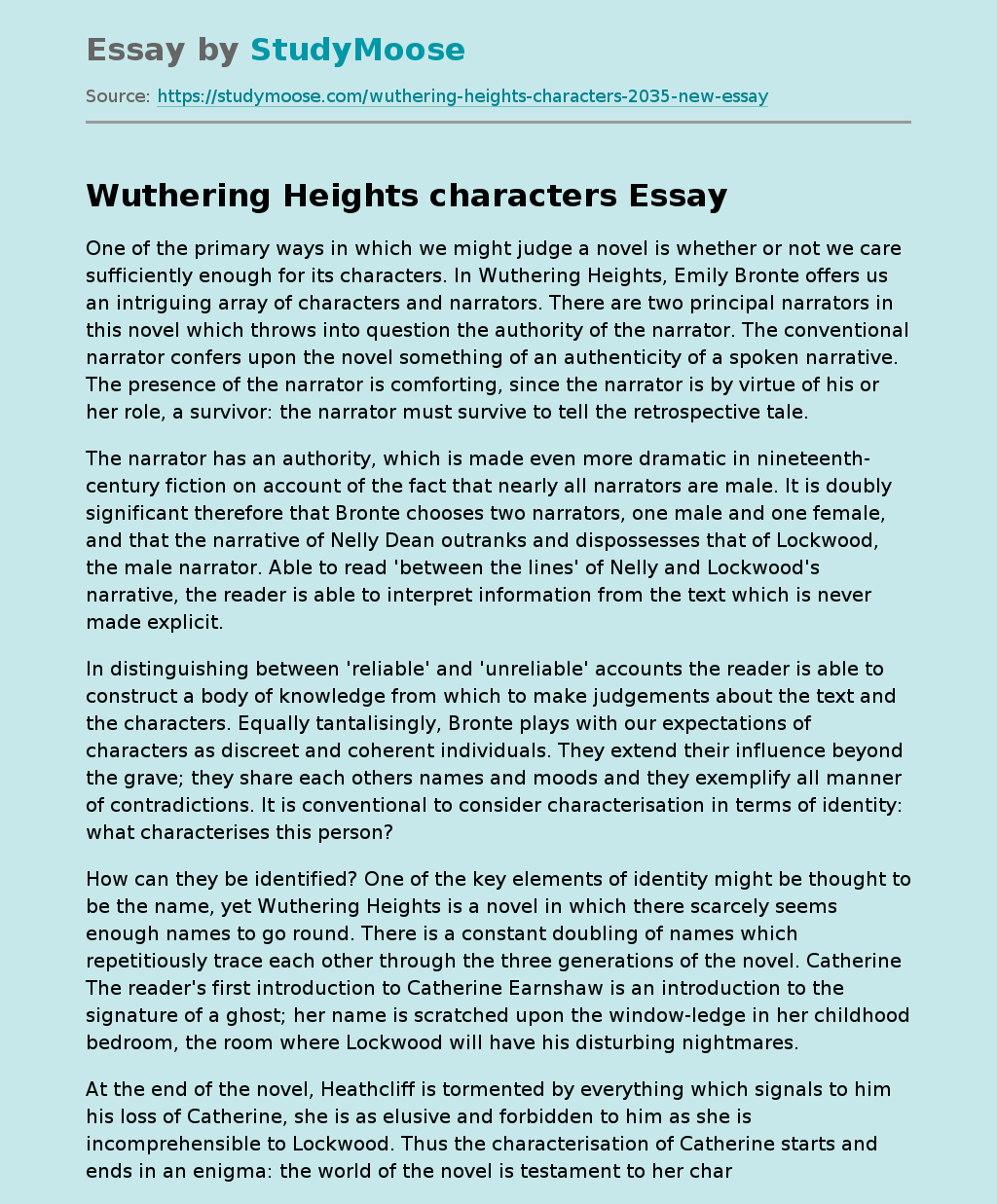