Summer Assignment: Survival of the Sickest

(1)What is the “big” question the book will attempt to answer? “Why would evolution allow seemingly harmful genetics t be passed through the gene pool?”

(2)The author points out many ways in which iron impacts life. Identify/describe at least five. 1. Hemoglobin to carry oxygen 2. oceans “seeded” with iron can hold more oxygen producing organisms. 3. Parasites feed on human iron. 4. Cancer cells thrive on human iron 5. High levels of iron can counter-act the effects of antibiotics, by feeding the bacteria to the point that they can live despite the antibiotics (3)In the context of this chapter, explain the author’s reference to Bruce Lee and to the barber pole.

Turn in your highest-quality paper
Get a qualified writer to help you with
“ Summer Assignment: Survival of the Sickest ”
Get high-quality paper
NEW! AI matching with writer

Bruce Lee is compared to the iron-deficient macrophages of the immune system because they are viewed as being inferior, as is Bruce Lee, but can kill better than their fully equipped counterpart in a human without hemochromatosis.

The barber pole was the place to go for centuries in the west to be bled.

The pole had all the aspects of this practice. The brass bowl at the top was representative of the bowl used for holding leeches that drew the blood, and the bowl on the bottom was for the collection of blood. The red and white stripes originated in the medieval times when bandages were hung on a pole to dry, giving them the twisted pattern. The author make this reference because a treatment for hemochromatosis is bloodletting, and this treatment dates back to medieval times.

(4)Distinguish between each of the three types of diabetes.

1. Type 1 diabetes occurs when the body recognizes the cells that produce insulin in the pancreas as foreign and attack them. Without the insulin, the blood sugar level cannot be maintained. 2. In type 2 diabetes, insulin is not recognized or not produced to the levels needed to effectively absorb and convert blood sugar. 3. Gestational diabetes is usually temporary in pregnant women, and what occurs is extra blood sugar is present in the mother’s blood as a result of the fetus triggering the mother’s circulatory system to diffuse more sugar across the placenta. (5)What did the ice cores of 1989 reveal about the Younger Dryas? The ice cores of 1989 revealed that the Younger Dryas lasted only three years and was onset in just ten years. (6)Describe the body’s “arsenal of natural defenses” against cold. The first thing that happens when the body senses the cold is shivering to produce more muscular heat. At the same time, the body is constricting the capillaries in the extremities starting at the fingers and toes and working up.

In some people, the Lewis wave occurs, sending a rush of blood to the extremities to warm and protect them from harm, and returning to the torso. Brown fat is also burned only when the body is exposed to cold. One more defense the body has is diuresis, or the urge to urinate. This is caused by the increase in blood pressure and the body tells the kidneys to unload some extra fluid to compensate. (7) Describe the connection between Rana sylvatica and diabetes. Diabetes causes the levels of blood sugar to increase in the blood. This may have been an advantage in the Younger Dryas because the increased blood sugar decreased the temperature needed to freeze the blood. Rana sylvatica proves this theory every winter.

It does this by expelling as much water as possible so the blood sugar level in its blood is raised. This way Rana sylvatica can survive in its frigid habitat. It could be said that Rana sylvatica self-induces a state of diabetes to survive. (8)In Chapters I and II several inherited disorders were discussed. Create and complete a chart with the following information: Disease/Disorder, Symptoms, Evolutionary Advantage Disease/Disorder | Symptoms | Evolutionary Advantage | Cystic Fibrosis | Lung related illnesses, young death. | Protection against Tuberculosis | Hemochromatosis | Tan skin, Aches and pains, Fatigue | Protection against Bubonic Plague | Anemia | Fatigue, Shortness of breath | Protection against Plague and other infections | Diabetes | Sugary urine, gangrene, stroke, heart disease | Protection against cold weather |

(9)Why do we need Vitamin D? Cholesterol? Folic acid?

We need Vitamin D because it ensures growth and maintenance of healthy bones, proper levels of calcium and phosphorus in our blood, proper function of the heart, nervous system, the clotting process and immune system. Also, Vitamin D helps protect against osteoporosis and rickets. We need Cholesterol to produce Vitamin D, make and maintain cell membranes, help the brain send messages, to help the immune system protect against cancer and other diseases, and also to be a major component of estrogen and testosterone. We need Folic acid because it aids in cell growth and DNA replication. (10) Briefly describe the connection between the two concepts: a.tanning beds; birth defects

Tanning beds decrease the amount of Folic acid, and Folic acid helps DNA replication, preventing birth defects. b.sunglasses; sunburn sunglasses prohibit the optic nerves from picking up the amount of UV radiation. The optic nerves tell this level to the pituitary, which sends a message to the melanocytes to produce proper amounts of Melanin. If the optic nerves don’t pick up the right levels, the pituitary doesn’t tell the melanocytes to produce proper levels of melanin, which protect our skin from sunburn from the UV rays. hypertension; slave trade

hypertension is caused by a diet high in salt and an ability to retain that salt. During the slave trade, the Africans were forced to America in awful conditions including dehydration. Africans with a natural propensity to have higher levels of salt were more apt to survive. When the Africans eventually became prominent in the Americas, their diet was high in salt, and they contract hypertension easier than a native or European. Asian flush; drinking water

Asian water was boiled and turned into tea for drinking. In Europe, they fermented their water, making alcohol. The cultures became used to these conditions and their bodies did also. When Asians decided to go elsewhere in the world, they had to be assimilated into other cultures. This meant having to eat and drink the other cultures. Alcohol was a big part of European culture, and they developed chemicals to help their bodies digest it properly. Asians did not have these chemicals, so when they drink alcohol, they don’t digest it properly, resulting in Asian flush. e.skull shape; climate

Skull shape may have evolved in order to store heat in different ways, depending on climate. f.body hair; malaria Dense body hair may have been a defense against malaria-carrying mosquitoes, by having a sweater-like lining of hair. (11) What’s so fishy about the Inuits skin color? The Inuits have dark skin but a limited amount of sunlight. This is because their diets are full of fatty Vitamin D carrying fish, so they got their vitamin D, but need to protect their Folate levels, thus the dark skin. (12) Explain the good and the bad of ApoE4.

(13) Explain the role of G6PO.
G6PO eliminates free floating free radicals in our bodies
(14) Briefly describe the connection between the two concepts: g.European clover; Australian sheep breeding crisis of the 1940s European clover was struggling to survive in the Australian dryness, so it produced formononetin, a chemical that destroys the reproductive system of grazing predators. The Australian sheep ate the formononetin rich European clover, and their reproductive systems are destroyed, resulting in a breeding crisis. h.Capsaisin; birds and mammals

Chili plants produce Capsaisin, a chemical that causes spicy taste. Capsaisin, however, doesn’t effect birds but does effect mammals. This is because mammals destroy the chili plants’ seeds, whereas birds do not. Capsaisin is a defensive chemical to make mammals not want to eat chili plants. Malaria; air conditioning

Favism is an enzyme deficiency that doesn’t allow fava beans to be digested correctly, and results in free radicals in the blood stream, breaking down red blood cells. (15) Explain the following statement found on page 87:

“Life is such a compromise.”
Life is a compromise because the things that we need to survive can also be deadly if not used correctly and in the right amounts.

Summer Assignment: Survival of the Sickest. (2017, Feb 13). Retrieved from https://studymoose.com/summer-assignment-survival-of-the-sickest-essay 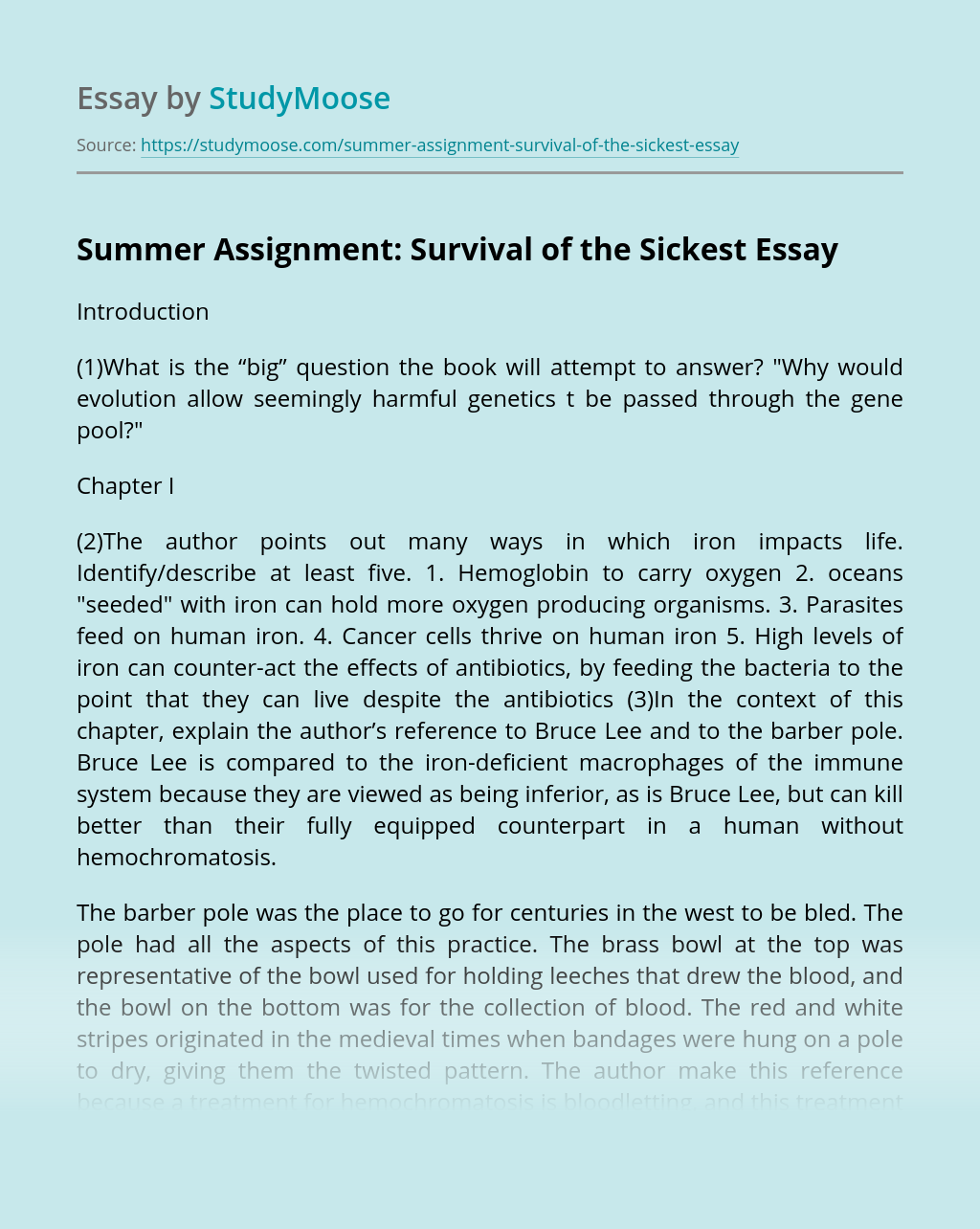 Turn in your highest-quality paper
Get a qualified writer to help you with
“ Summer Assignment: Survival of the Sickest ”
Get high-quality paper
Helping students since 2015
Stay Safe, Stay Original