The Survival of Non Alcoholic Beverages in Malaysia

Furthermore, the increase in the population of Asia Pacific region (APAC), tend to give rise to 700 million new consumers by 2020 (Accenture, 2008) which also will give rise to the demand for food and beverages.

Don't use plagiarized sources. Get your custom essay on
“ The Survival of Non Alcoholic Beverages in Malaysia ”
Get custom paper
NEW! smart matching with writer

In which it was estimated that food and nonalcoholic beverages would be a $us781 billion market in APAC by 2010 (Accenture, 2008). Thus, the market for non-alcoholic beverages has given rise in the past few years. Whereby, it is expected that it will expand at a moderate rate of 3. 8 percent in APAC.

Malaysia has been of no exception as a market for nonalcoholic beverages, in which they already have in their market a number of non- alcoholic brands (made fruit contents and malts) namely: 1- ISTAK from Arpanoosh Industrial Co 2- MALTA from Guinness Anchor Berhad 3- NUTRIMALT from Carlsberg Malaysia 4- BARBICAN from Aujan Industries.

The product is basically portrayed as Halal whereby, it specifies the alcoholic level in the drink.

It is also marketed as a healthy fruit and malt based product designed for the healthy lifestyle groups, youth, as well as women who are pregnant and who are breast feeding. Marketing Strategies and Tactic Malaysia is a multiracial, multi religious and multicultural society. However, the dominant ethnic group is Muslim Malays (Cyril De Run et al. , 2010). As businesses which provide nonalcoholic beverages in Malaysia, they need to ensure that they target the right customer’s segmentations and use the right marketing strategies.

In avoiding using the term Halal, and labeling of the product as nonalcoholic demonstrates an understanding of the Muslim psyche (Wilson and Liu, 2010) which is a successful marketing tactic used by the producers to gain the trust of the Muslim society. As, it can be deemed by Muslims that the drink to be Halal and circumvent the potential for greater consumer scrutiny (Wilson and Liu, 2010) this may have contributed to the success of the product till today. In this day where competition is high the product should create a buzz in order to be known to the market.

One strategy used recently in Malaysia was entering into the market through exhibition. As such, ISTAK brand was introduced in the Mihas Exhibition held in 2009 for nonalcoholic beverage. Whereby, it created awareness among the consumers on the availability of nonalcoholic beverages. Factors that can contribute towards the success and failure of the product. Rising middle class and urbanization has influenced the consumer preferences. Whereby, they look for convenience, healthy choices and new taste options (Accenture, 2008) As such localization of the products is a must for the survival of the product in the foreign market.

Nonalcoholic drinks cater to this market by way of offering different flavored drinks to its consumers based on the local taste buds. Malaysia is an emerging country with lower market competitiveness. And there is room for business to grow especially in food and nonalcoholic beverage industry (Accenture, 2008). There is also a shift in non-carbonated alternatives to nonalcoholic beverages in the Asia Pacific Region (Accenture, 2008) indicating Malaysia as one of the potential market for expansion for the product. Media plays an important role in determining a success rate of a product.

It may influence consumers buying decisions based on how the media portrays the products. Consumers tend to get influenced by advertisement that they see. Therefore, businesses will usually use advertisement and other media channel to promote their products. The code of advertisement is heavily influenced by Islamic Values in Malaysia (Cyril De Run et al. , 2010). In the Mihas exhibition (Refere to Appendix two) it can be seen that it creates a controversial sight on whether it is an acceptable approach to advertising based on religious views of the Muslims.

Such that it creates an atmosphere so much, related to the Western Culture. However, to some it can be acceptable. Thus, in this case Religiosity plays an important role in the modern day consumer behaviors (Muhamad and Mizerski, 2010). This brings us to the fact of nonalcoholic beverages been Halal which can be a critical issue in the success or failure of nonalcoholic beverages in Malaysia. Based on the Hadith of Prophet (peace be upon him) said: “Every intoxicating substance is unlawful. ” [Sahih al-Bukhari] (http://en. islamtoday. net, 2003). Thus intoxicating substances are prohibited to Muslims.

Conservative Muslims tend to take this more literally and do not give a second thought on what is really the intoxicating substance and how it becomes Haram. Some argue that nonalcoholic drink is Haram due to this context. Furthermore, it has been concluded by experts that alcohol level that does not exceed 0. 5% is not intoxicating (http://www. islamawareness. net, 2011). Most of the nonalcoholic beverages maintain the content at this level or lesser than the accepted level. People who misunderstand often confused with the interpretation of the hadith “whatever intoxicates in big quantity, a small amount of it is haram.

” However, the hadith is only talking about the “intoxicating substance” that is not mixed with others (http://www. islamawareness. net, 2011). In the case of nonalcoholic drinks it is mixed with other substances therefore, some Muslims may consider it as Halal. This view can be acceptable to more liberal Muslims whereby they tend to accept the ideologies more willingly. Hence, it is based on the degree of religiosity of the individual that can determine the decision on accepting or rejecting nonalcoholic products.

Hence, the Halal logo cannot be taken lightly and needs to be certified by a credible authority (Zakaria and Abdul-Talib, 2010). In Malaysia, for example, JAKIM is the authority with the power to endorse food and services through its logo or sticker (Sirim, 2004, as cited in Zakaria and Abdul-Talib, 2010). In the case of Malaysian Muslims, nonalcoholic beverage companies have to be more cautious in selling and promoting their services as, religious group tends to follow them closely (MacFarquhar, 2002 as cited in Cyril De Run et al. , 2010).

There is also other issues that need to be taken into consideration before determining the status of Halal in nonalcoholic beverages. For example,who is the producer and what is the alcohol substance level. According to the 22nd conference of the Fatwa Committee National Council of Islamic Realigious Affairs Malaysia held on 24th November 1988 on alcohol as soft drink stabilizer, the Committee has decided that cordial containing flavor that has alcohol substance in it as stabilizer is lawful for the drinking purpose, if: 1. The alcohol is not produced from liquor production

2. The quantity of alcohol is minimal and it is not intoxicated (http://www. e-fatwa. gov. my, 2011) The Islamic Law in Malaysia permits 0. 01% of Alcohol content in beverages. Due to recent findings on the alcohol level in the nonalcoholic beverages, Islamic Development Department of Malaysia (Jakim) and the state of affairs council will prohibit the sale of these beverages to Muslims (The Malay Mail, 2011) thus it will be placed in non-halal section. This will affect their sales as Muslims will no longer be allowed to consume and purchase the nonalcoholic beverage.

However, they still can maintain their other target markets as mentioned above. Conclusion In the nut shell, we may conclude that here is a potential market for nonalcoholic beverages in Malaysia as there is a high potential of growth but due to government intervention, the level of success may hinder. However due to religiosity differences, the consumers may still perceive the product as Halal thus may not destroy the existence of nonalcoholic beverages among Malaysian consumers.

APPENDICES APPENDIX ONE EXAMPLE OF NON-ALCOHOLIC BEVERAGES AVAILABLE IN MALAYSIA ? Carlsberg – Nutrimalt [pic] The non-alcoholic Nutrimalt sported a new look with a more vibrant and energetic colour theme and packaging. The new brand identity received positive comments from retailers and consumers. Enriched with vitamins C and B complex, Nutrimalt is targeted at consumers who lead on an active lifestlye and are always on the go.

The Survival of Non Alcoholic Beverages in Malaysia. (2017, Feb 26). Retrieved from https://studymoose.com/the-survival-of-non-alcoholic-beverages-in-malaysia-essay 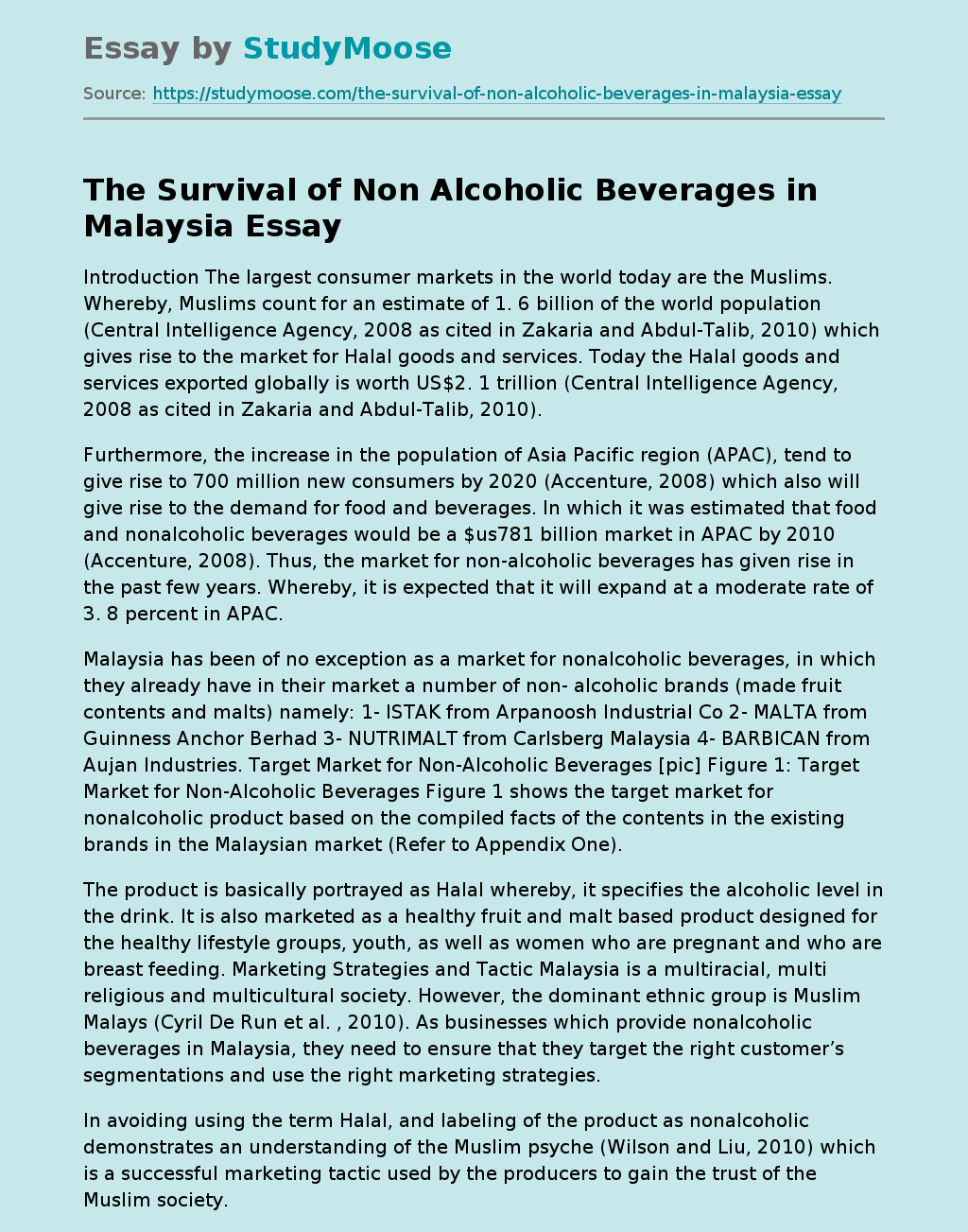