127 Hours is the true story of mountain climber Aron Ralston’s remarkable adventure to save himself after a fallen boulder crashes on his arm and traps him in an isolated canyon in Utah. Over the next five days Ralston examines his life and survives the elements to finally discover he has the courage and the wherewithal to extricate himself by any means necessary, scale a 65 foot wall and hike over eight miles before he can be rescued. Throughout his journey, Ralston recalls friends, lovers, family, and the two hikers he met before his accident.

Don't use plagiarized sources. Get your custom essay on
“ The Movie “127 Hours” ”
Get custom paper
NEW! smart matching with writer

Outdoor adventurist Aron Ralston believes he’s invincible and can do it all alone while on his outdoor adventures. He considers the great outdoors his second home. On Saturday, April 26, 2003, Aron has gone for an adventure trek alone through the generally secluded Blue John Canyon, and like he has done on many of his other treks, he has not told anyone where he is going. But on this day, he and a small boulder fall down a crevice, he landing near the bottom of the crevice virtually unharmed, but with his right hand wedged between the boulder and the crevice wall.

He has access to his gear and his small supply of rations as he tries to move the boulder or chip away at it so that he can get his wedged hand free. As either task seems impossible, he hopes for someone to rescue him. Those most likely candidates are Kristi and Megan, two women he met earlier that day who are the only two who know that he is in the canyon, or his boss Brion, who may list him as missing if he doesn’t show up for his scheduled work time on Tuesday (three days away).

As time goes on and he deals not only with the boulder and lack of rations but also with the extreme weather conditions, he begins to think about his mortality, his mind often going toward his loving but somewhat distant relationship with his family, or his last broken love with a woman named Rana. As he films himself (as a goodbye message to his family) often with his mind wandering, he, during his more lucid moments, also thinks about the possibility of trying to sever his arm as he will lose it anyway if he survives this ordeal.

On April 2003, the engineer, climber and canyoneer Aron Ralston travels to Blue John Canyon without telling anyone to spend the weekend doing what he likes to do: climb the isolated canyon. He meets the teenagers Kristi and Megan that are lost and they spend a couple of hours together bathing in a lake in a cave. He says goodbye to them and while descending a canyon crack, a chockstone comes loose rolling onto his arm.

Aron realizes that he is stuck and he tries to find a way to release the stone. Along five days short of water and without food, Aron becomes delusional and recalls his family and friends. After the fifth day, he decides to sever his forearm to survive. 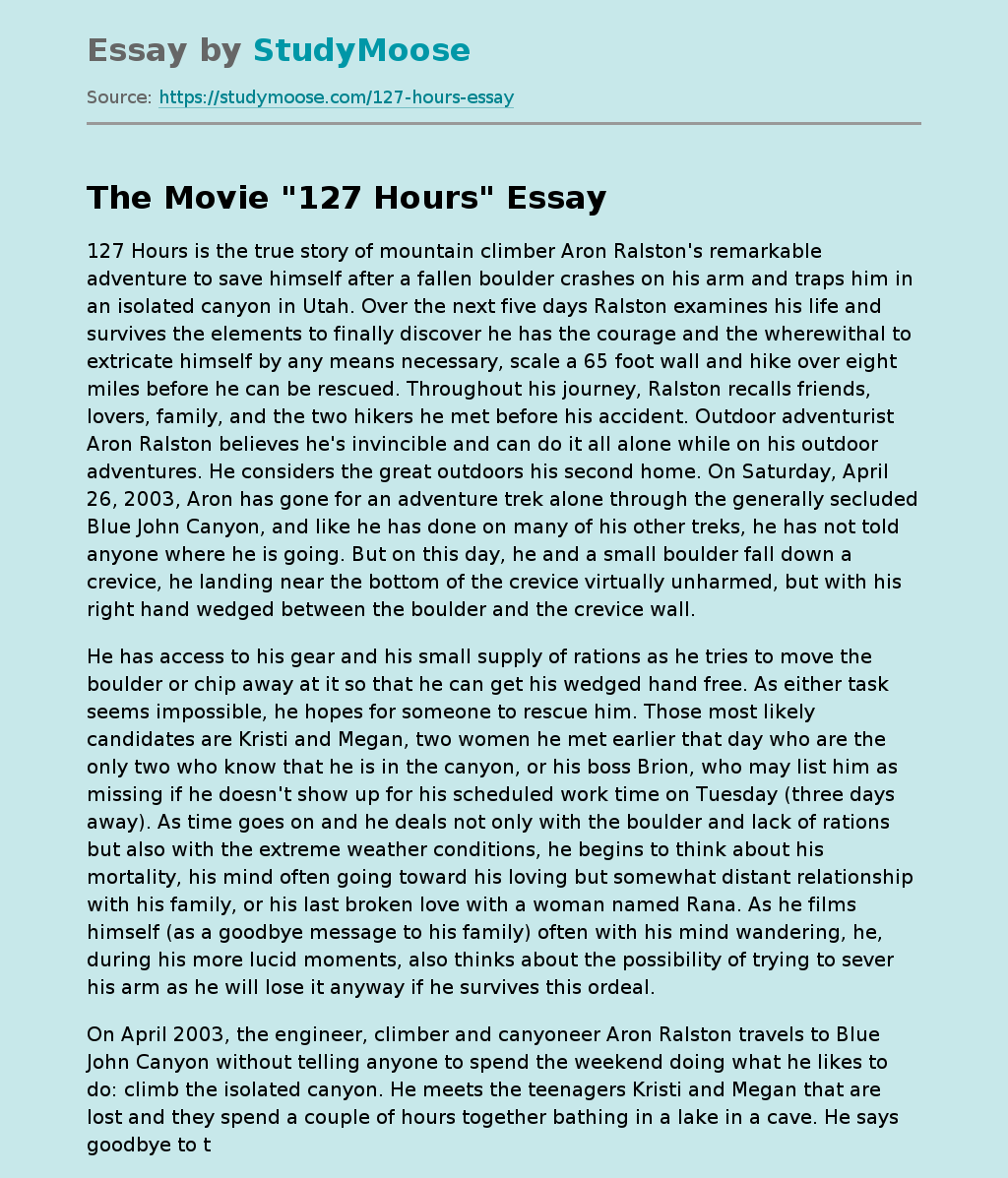