The Hours: Novel vs. Film

The Hours, written by Michael Cunningham, is an award winning novel that was adapted for the big screen by director Stephen Daldry. The novel centers on three different women whose lives weave and intertwine with each others by the end. The film, while staying true to the book, took some artistic license to expand on certain aspects and to separate the book from the film. There were a few noticeable changes the film made that effectively enhanced the meaning of the book and took away meaning at the same time in some cases.

Don't use plagiarized sources. Get your custom essay on
“ The Hours: Novel vs. Film ”
Get custom paper
NEW! smart matching with writer

In the novel, each chapter focused on either Virginia Woolf, Laura Brown, or Clarissa Vaughan. The chapters would alternate and show the women in different situations. The movie however, showed quick glimpses of each of them in pseudo-similar settings. For example, each of them were seen sleeping, waking up, and getting ready for the day in back to back scenes. This then effectively set up the viewers to know that the women are connected in some way.

It takes a little while for that to be seen in the novel but the film wants to throw that out there right away. By doing that though, it take detracts from the meaning of the book in that it’s just giving it away too soon.

The book slowly connects the women in its own way to sort of give the reader time to marinate on the things that have already been read and to figure it out for themselves.

Another instance of something being given away too soon is the revelation that Richard, Clarissa’s dear friend, is the same Richard that is Laura Brown’s son. There was no outstanding effect from this like there was in the novel. The fact that Richard Brown was Laura’s son isn’t quite revealed until the near end, after Richard’s death. The film detracted a sort of shock value from the novel. When the revelation occurs in the book, it happens during that arc where everything seems to be falling into place. So for the movie to just let Richard flashback to his childhood so aloofly just strays from the novel quite a bit.

One of the most obvious and recurrent themes of The Hours is suicide. All three women have a brush with suicide in some way. Although both the film and novel portrayed it effectively, the novel did more so. The first most obvious instance is the prologue in which Virginia Woolf commits suicide by drowning herself in a river. The next then, would be Richard Brown’s suicide by means of falling out of a window. The novel would hint at Laura Brown possibly committing suicide because of how trapped and constrained she felt but ironically, Laura was the last of her family to live. She chose to run away and that combined with a number of other factors led to Richard’s suicide. The movie doesn’t convey all of this as well because it lacks the ability to do a sort of narrative to get inside the characters’ thoughts.

All in all, with the aforementioned taken into consideration, I would have to say that I preferred the book over the movie. As stated earlier, even though the movie did try to stay true to the book, it made some questionable choices that translated to virtually nothing. The choice to reveal certain things early made me do a double take because there was a reason for things to happen at certain times in the novel so that it would all flow and make sense at the denouement. The movie also made some scenes feel awkward whereas in the novel, it made sense.

For example, the encounter with Laura and Kitty seemed off in the film. When Laura kissed Kitty, it appeared to be really out of the blue and it didn’t really make much sense why she did it. But in the novel, Laura’s train of thought precedes her actions so the whole thing is put into context more. In brief, the novel presented everything in a more elegant manner. Where the novel lacked color, the film more than made up for it; but ultimately, the novel was more stylish in its arrangement. 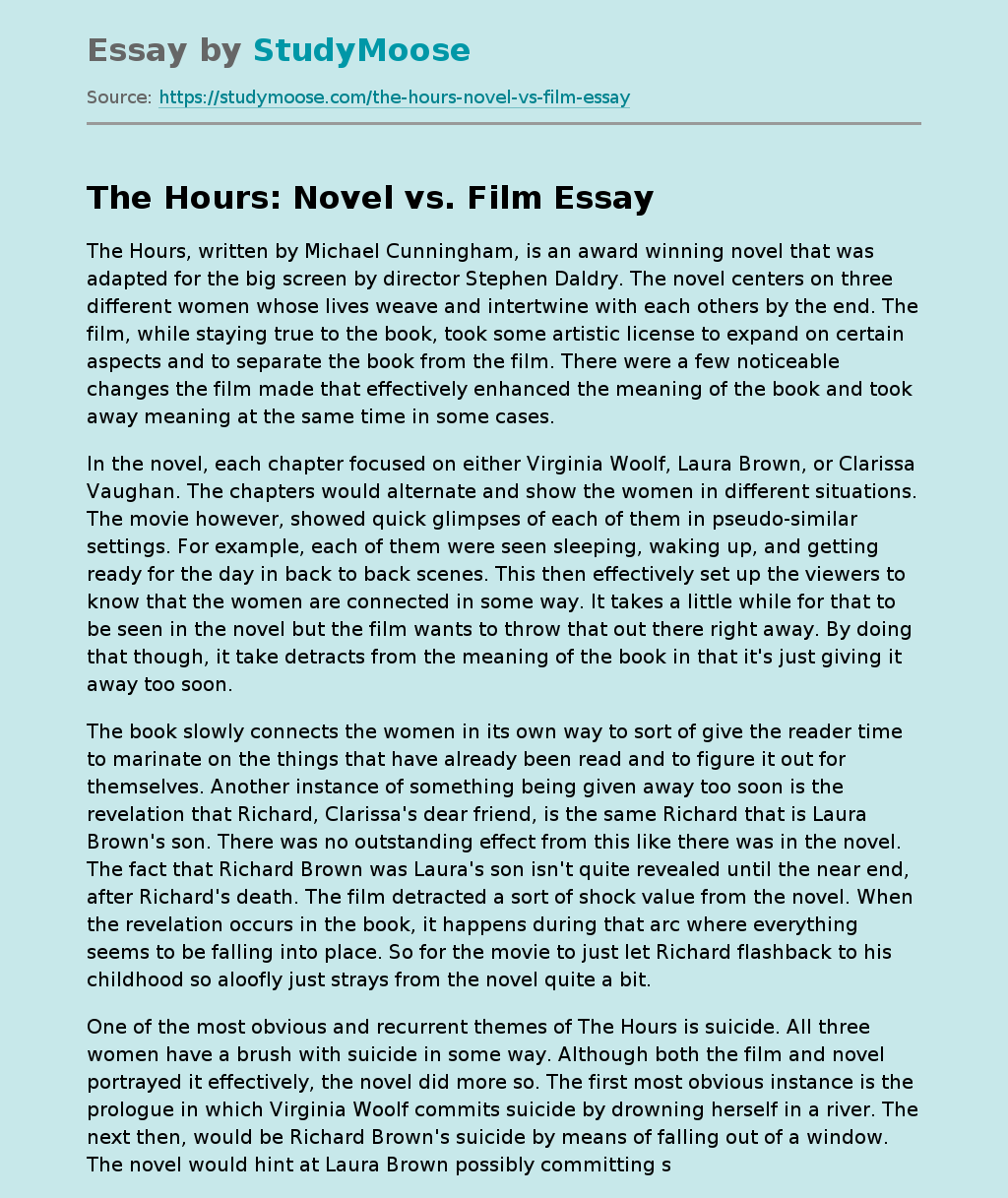