Life of Pi is an intriguing story about a young indian boy named Pi, who embarks on an incredible journey across the Pacific ocean from India to Canada on a lifeboat. On his adventure, Pi is forced to confront and overcome the most daunting of obstacles and face some of the toughest survival tasks, all while accompanied by a 450 pound bengal tiger. His perspective of the tiger changes over the course of the book, and they become emotionally attached to each other.

Don't use plagiarized sources.
Get Your Custom Essay on Richard Parkers Attributions to Pi’s Survival Just from $13,9/Page

When the novel began, the tiger, named “Richard Parker,” was one of the challenges that Pi had to overcome. Towards the end however, Richard Parker becomes necessary in order for Pi to survive. In Life of Pi, Richard Parker helps Pi three main ways: physically, mentally, and emotionally.

As their journey progresses, surviving becomes one of the most difficult tasks that Pi and Richard Parker have to face. Some of these challenges include extreme risk, where Richard Parker puts himself in danger to protect Pi’s life.

An ideal example of one of these occurrences is when Pi meets the french cast away with cannibalistic tendencies.

In the face of danger, Richard Parker “ripped the flesh off the man’s frame and cracked his bones,” saving Pi (pg. 283). However, this isn’t the only time that he rescues Pi. Richard Parker defeats the sharks that are threatening Pi’s life in Chapter 41, which is an excellent example of his loyalty towards defending Pi. Another example of his care for Pi is the incident on Chapter 53, when he killed the hyena, another one of the things capable of harming Pi. At the end of the story, Pi owes his life to Richard Parker.

Richard Parker didn’t just physically defend Pi, he also kept him mentally sane. When Pi was successful with “taming” Richard Parker, it gave him the boost of confidence he needed to survive. The main effect that Richard Parker has on Pi is his ability to remind Pi of his true animal instincts. This helps Pi avoid over-thinking things and helps him realize his one true goal: survival.

Towards the end of the story, when they wash up on the beach, Pi says “I would like to say it formally: Richard Parker, thank you for saving my life” (pg.317). It is evident that in this quote, Pi is referring to the fact that Richard Parker helped stop Pi from going out of his mind after he says “Richard Parker, companion of my torment, awful, fierce thing that kept me alive,” earlier in the chapter (pg.316). Richard Parker gave Pi one thing that nobody else would have been able to give him: Hope.

The most powerful way that Richard Parker is able to help Pi is emotionally. On multiple occasions throughout the story, Pi defines Richard Parker as his “companion.” Try to think of how difficult it would be to survive a week without any form of companionship, let alone 227 days; its unimaginable.

Pi and Richard Parker manage to develop a true friendship as the story progresses, despite the species difference. This helps Pi get the moral support that he needs to survive. When the novel came to a close, Richard Parker knows he has done what he can to help Pi. He knows it is time for him to leave. As they wash up on the shores of Mexico, Richard Parker walks off into the jungles of Mexico, never to be seen again.

In life of Pi a young indian boy manages to survive 227 days on a lifeboat, with a 450 pound bengal tiger. In fact, he couldn’t have done it without the tiger. The tiger, who goes by the name of Richard Parker, helps Pi by helping him overcome the most daunting obstacles that he has ever faced. Richard supports Pi physically, By defending him from the dangers in the Pacific. He supports Pi mentally, by keeping him sane and reminding him of his instincts. Most of all he supports Pi emotionally, by befriending him, and morally supporting him. Suffice it to say, Richard Parker saved the “Life of Pi”. 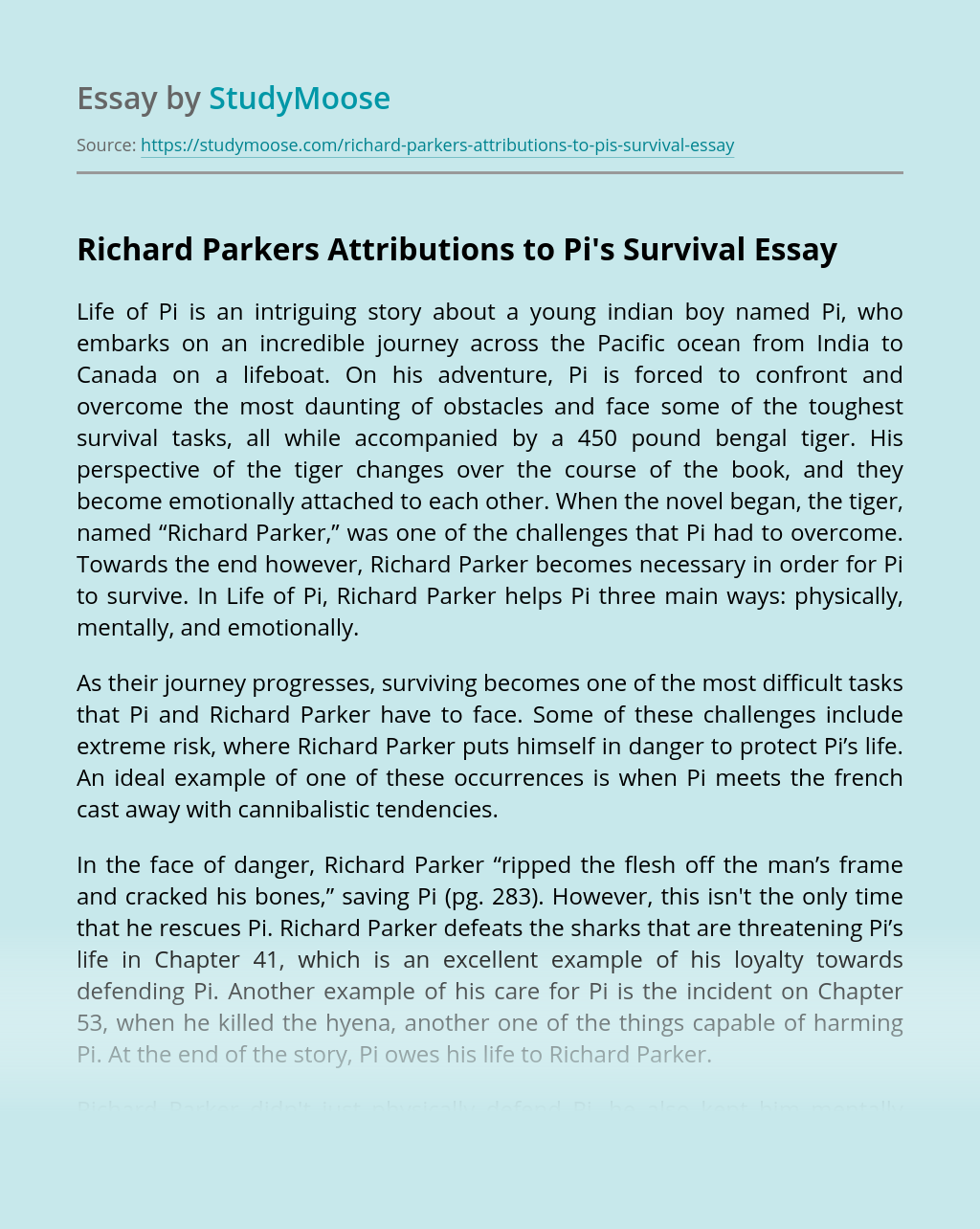 There are an enormous amount of people in this world that we live in. All of these people belong to different cultures and societies. Each society has traits and customs that make it different from any other. Every society has their own way of looking at and dealing with certain situations. “Different societies have different...

Get Essay
Impacts of the Sixties Counterculture on History

Hippies represent the ideological, naive nature that children possess. They feel that with a little love and conectedness, peace and equality will abound. It is with this assumption that so many activists and reformers, inspired by the transformation that hippies cultivated, have found the will to persist in revolutionizing social and political policy. Their alternative...

According to the dictionary of Cambridge “materialism” is the belief that having money and possessions is the most important thing in life. In today’s world this notion has a strong place among people-especially in the culture of youth- regardless their social classes.The economic system of our age relies on the customers and consumption therefore the...

Labour Day or Labor Day is an annual holiday celebrated all over the world that resulted from the labour union movement, to celebrate the economic and social achievements of workers. The majority of countries celebrate Labour Day on May 1, and it is popularly known as May Day and International Workers’ Day Most countries celebrate...