The First Amendment to the United States Constitution is perhaps one of the most misunderstood provisions in the US Constitution.  It states that “Congress shall make no law respecting an establishment of religion, or prohibiting the free exercise thereof; or abridging the freedom of speech, or of the press; or the right of the people peaceably to assemble, and to petition the government for a redress of grievances.”

Most people think that the principle behind the First Amendment is a modern invention of man which started only in the 18th Century and that Thomas Jefferson is “the primary architect of the American tradition of separation of church and state.

Don't use plagiarized sources. Get your custom essay on
“ Analysis of Free Exercise Clause and Establishment Clause ”
Get custom paper
NEW! smart matching with writer

” (Thomas Jefferson and the Separation of Church and the State” 1)

The separation is not one of hostility but an understanding that their union will only lead to the destruction of the state and the degrading of the church.

The First Amendment embodies two rights which are known as the Free Exercise Clause and the Establishment Clause.  While both these clauses prohibit government intervention in matters of religion, tensions are inevitable between the requirement of neutrality under the Establishment Clause and the government accommodation of certain religious practices by virtue of the Free Exercise Clause.

To explain further, issues arise as the government allows certain religious sects from practicing their own religion which can be considered as a violation of neutrality on the part of the government on religious matters under the Establishment Clause.  There have been a number of cases that discuss about the First Amendment, the Free Exercise Clause and the Establishment.  This essay seeks to briefly summarize and discuss these concepts utilizing existing cases for the purpose of clarifying topics in which there are gray areas.

Under the Free Exercise Clause, the government may not punish or discriminate against an individual or group of individuals simply because they espouse religious beliefs or require any persons to adhere to a particular religious belief.  The Free Exercise Clause is in fact intimately connected with Freedom of Expression, such as Freedom of Speech, press, assembly, and petition, that it cannot be separated therefrom (Thomas E. Patterson, 2007, p.124).

This was the doctrine enunciated by the Supreme Court in the case of Reynolds v. US (98 US 145) which involved a member of The Church of Jesus Christ of Latter-day Saints who was put to trial for charges of bigamy.  George Reynolds, the defendant, argued that he should not be charged for bigamy as he was merely obeying his religious duty to marry multiple times.  The Supreme Court declared that religious duty was not a suitable defense to bigamy, to wit: “But when the offence consists of a positive act which is knowingly done, it would be dangerous to hold that the offender might escape punishment because he religiously believed the law which he had broken ought never to have been made. No case, we believe, can be found that has gone so far.”  (Reynolds v. US, 98 US 145) 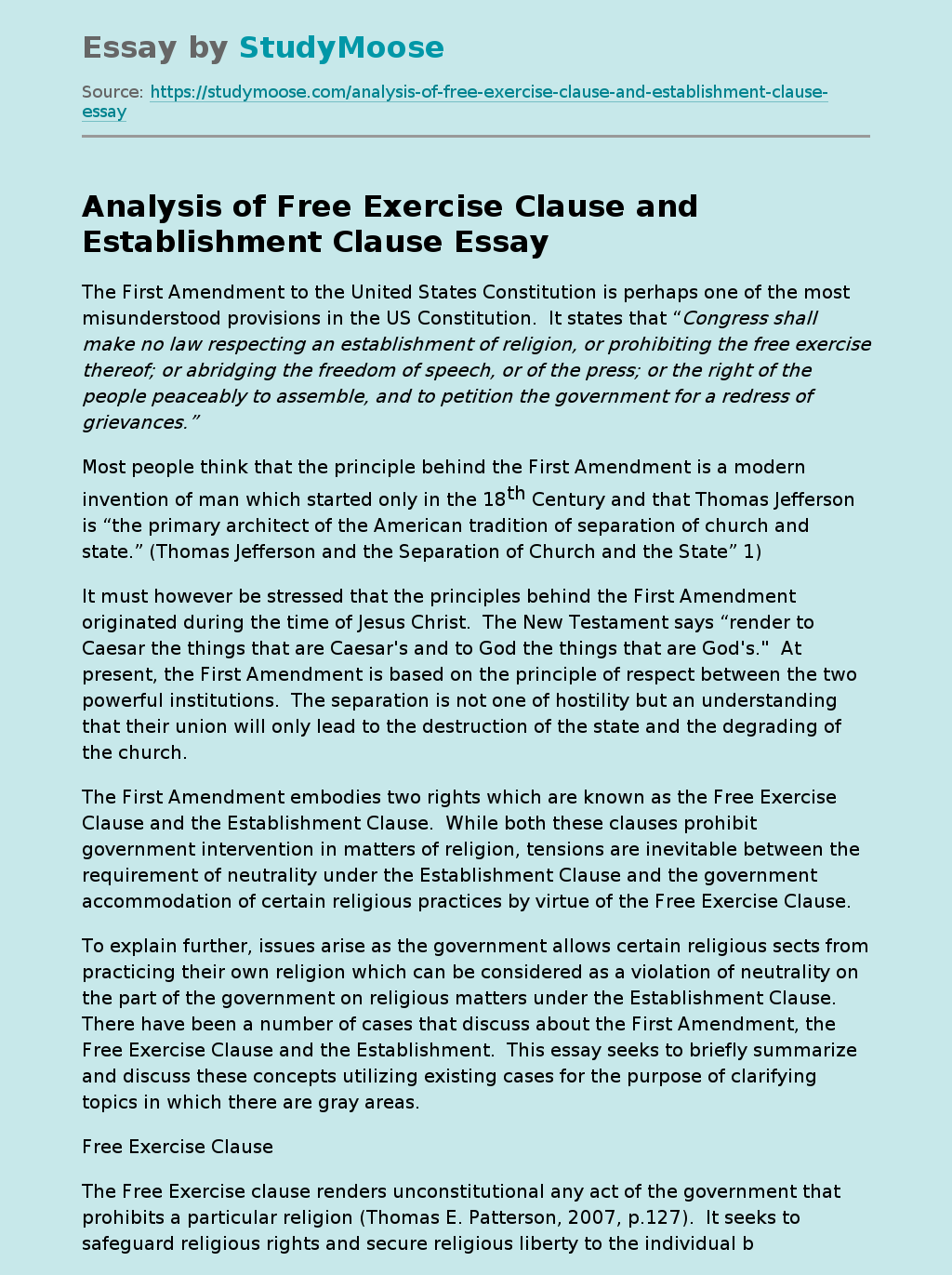