The effects of exercise on the cardiovascular and respiratory system

The objective of this report is to critically explain the physiological effects of exercise on the human respiratory system and cardiovascular system. To begin with, I will explain the two systems, their specific functions and how they inter-relate. I will then go on to analyse the effects of exercise on the two systems by looking at the way in which the body deals with an increased workload, and any health issues that may affect this.

This system is responsible for pumping blood and oxygen around the body.

Don't use plagiarized sources. Get your custom essay on
“ The effects of exercise on the cardiovascular and respiratory system ”
Get custom paper
NEW! smart matching with writer

It is a network made up of blood vessels that transport carbon dioxide from the body to the lungs. The heart is an organ so needs a constant supply of oxygen. This is supplied by a separate network of blood vessels called the coronary system, made up of coronary veins and arteries. The heart is the size of a clenched fist, located slightly to the left of the chest. It is divided into left and right sides, has four chambers and works as a pump.

Veins deliver deoxygenated blood from the body to the right side of the heart; this is known as Pulmonary Circulation. The heart then pumps this back to the lungs to absorb oxygen. Oxygenated blood returns to the left side of the heart which pumps it to the rest of the body through the arteries; this is known as Systemic Circulation. (Munford, K, 2012, cited in Bupa).

This system is responsible for ensuring the body has a constant supply of oxygen, whilst removing carbon dioxide.

It is made up of six organs and there are three major parts of the system; the airway, the lungs and the muscles of respiration. The respiratory system supplies the oxygen needed for the cardiac work load and its main function is gaseous exchange (Taylor, T cited in Inner Body).

Control of breathing by the medulla

Unlike the cardiovascular system which has myogenic cardiac muscle in the heart, the respiratory system is controlled by nerve signals from the brain. START: Impulses from the respiratory centre cause contraction of intercostal and diaphragm muscles which cause inspiration to start

Lungs inflate and air moves in:
Inspiration
Inflation of lungs stimulate stretch receptors in walls of bronchioles which fire off nerve impulses to the respiratory centre

At the end of expiration, the inhibition of the respiratory centre is removed. Stretch receptors are no longer stimulated so no more nerve impulses are fired off

Impulses from the stretch receptors begin to inhibit the respiratory centre

Inhibition of the respiratory centre prevents impulses causing inspiration; no impulses cause the muscle to relax so expiration occurs passively Lungs deflate and air moves out:

As the lungs become more inflated, more impulses are sent to the respiratory centre and it is completely inhibited

Gas exchange happens in the alveoli and is the process of supplying the blood with oxygen and removing carbon dioxide; a waste product of cell respiration. Without gas exchange, oxygen would not get into the blood and there would be a build-up of carbon dioxide in the body. If these two things happened the body would not be able to function to stay alive. Gas exchange can happen because the concentration gradient across the alveoli wall is maintained by blood flow on one side and air flow on the other (IHW, 2006, Biology Mad).

Tissues found in the two systems

– Blood is a loose connective tissue transporting substances around the body – Outer layer of blood vessels are made up of loose connective tissue meaning they are soft and pliable enabling diffusion -Different cell arrangements are suspended in an extra cellular matrix forming the characteristics of tissue. The matrix is what makes the tissue strong and protects the cellts. It is made up of protein and carbohydrates

– The trachea and bronchi are both supported by C shaped rings of cartilidge to keep them open. The ring is not complete which means they can still move.

– The epiglottis is made out of cartilidge

-Endocardial (inner) layer of heart is lined with simple endothelial tissue allowing blood to flow without friction; preventing damage to cells – The walls of the alveoli are made up of simple squamous epithelial tissue to allow quick diffusion – Pseudostratified ciliated epithelium line the upper respiratory tract to trap and move pollutants upwards with goblet cells producing mucus to trap debris. Ciliated cells sweep the mucus up out of the airways. Without this type of special lining tissue the lungs would get polluted with dirt from the air that is breathed in (Alberts, B et al, 2002)

– The heart is made up of involuntary cardiac muscle meaning it contracts under control of the nervous system only – Myocardium (middle) layer of heart wall is cardiac muscle made up of myogenic cells enabling the heart to contract without nerve signals. This means the heart can carry on beating even if a person is classed as ‘brain dead’ – Muscle tissues are made up of specialised cells using energy to contract and create a pulling force (MVB, 2012)

– Smooth muscle is found in the bronchioles to control air flow into different portions of the lung. Due to the absence of supporting cartilidge and the size of the bronchioles, they are exposed to the possibility of collapsing and becoming blocked – (cited in Barts and The London School of Medicine and Dentistry) – Skeletal muscle and fibrous tissue is found in the diaphragm enabling it to contract and relax

– Sino-Atrian node is made up of nervous tissue enabling it to send electrical currents to make the heart contract Nerve sensors in the muscles of the respiratory system receive impulses from the brain to control breathing. The brain detects oxygen/CO2 levels in the body so without this type of tissue, the respiratory system would not know when it needed to speed up or slow down (cited in National Heart, Lung and Blood Institute, 2014)

Cellular respiration is a process in which the energy in glucose is turned into Adenosine Triphosphate (ATP). This is the energy cells need for the body to function. The cardiovascular and respiratory system both work together to aid this process by suppling the oxygen and glucose, and by removing carbon dioxide (gas exchange).

Without cellular respiration, the body would not receive the energy needed in order to function when at rest and when under pressure (cited in Biology Mad).

The effects of exercise on the two systems

When a person exercises, the body’s demand for oxygen and energy increase. This means that both systems will be under stress and have to work harder in order to meet the need. The muscles in the heart and diaphragm will have to work quicker meaning they have less resting time. However as regular exercise would strengthen these muscles, this would result in larger breathing volumes, which in turn would allow more oxygen to be diffused into the blood flow. The heart muscles and walls would also get bigger and stronger meaning it can push more blood out per beat, so blood pressure would be lowered, even when at rest. It also improves the elasticity of the blood vessels meaning oxygen and glucose can be delivered at a faster rate to the muscles making the heart more efficient (Quinene, P cited in Live Strong, 2014). However, these muscles might not be strong enough to cope with the increased stress and should be built up over time. Exercise tolerance tests can determine an individual’s safe level of exercise.

As the body demands more oxygen, the heart rate and pulmonary ventilation increase to supply the muscles with oxygen. Exercise temporarily increases the capillary density at the muscle site which makes gas exchange quicker and more efficient (Saltlin and Gollnick, 1983 cited in Gatorade Sports Science Institute). However anaerobic respiration leads to oxygen debt and a built up of lactic acid, resulting in muscle cramp. It also limits the amount of energy the body receives, as the amount of ATP produced during anaerobic respiration is much lower than during aerobic respiration.

There are certain respiratory conditions that may limit an individual’s ability to exercise, even if the cardiovascular system would benefit from more vigorous exercise. Conditions such as Asthma and Chronic Obstructive Pulmonary Disease (COPD) limit the amount of oxygen intake. Both of these conditions narrow the airways meaning the body cannot get the oxygen it needs. This in turn would cause the heart to pump harder to try and supply its need which would eventually fatigue the muscles (Kenny, T, 2014 cited in Patient).

A positive effect of exercise is that it can increase the ‘good’ cholesterol in the blood which helps to lower the ‘bad’ cholesterol. Over time, high cholesterol can cause blocked arteries which means that parts of the heart would be oxygen deprived. By lowering cholesterol you reduce the risk of blood clots and heart attacks as the blood can flow freely without obstruction (cited in WebMD, 2014).

One of the causes of Diabetes type 2 is obesity. It damages the blood vessels by narrowing and blocking them; which can cause strokes due to oxygen starvation in the brain. Exercise aids weight loss which in turn will reduce the risk of Diabetes type 2 (cited in NHS, 2012).

In conclusion it can be said that exercise is beneficial for both the cardiovascular and respiratory system as it helps to strengthen the heart and increases respiratory capacity. Even when underlying conditions are present, a safe level of exercise is recommended as it can help conditions from worsening. However, as the cardiovascular and respiratory system work together supplying the body with oxygen and energy and by removing carbon dioxide, if one system is unable to function properly under the stress of exercise, the other system will also suffer.

The effects of exercise on the cardiovascular and respiratory system. (2016, Apr 23). Retrieved from https://studymoose.com/the-effects-of-exercise-on-the-cardiovascular-and-respiratory-system-essay 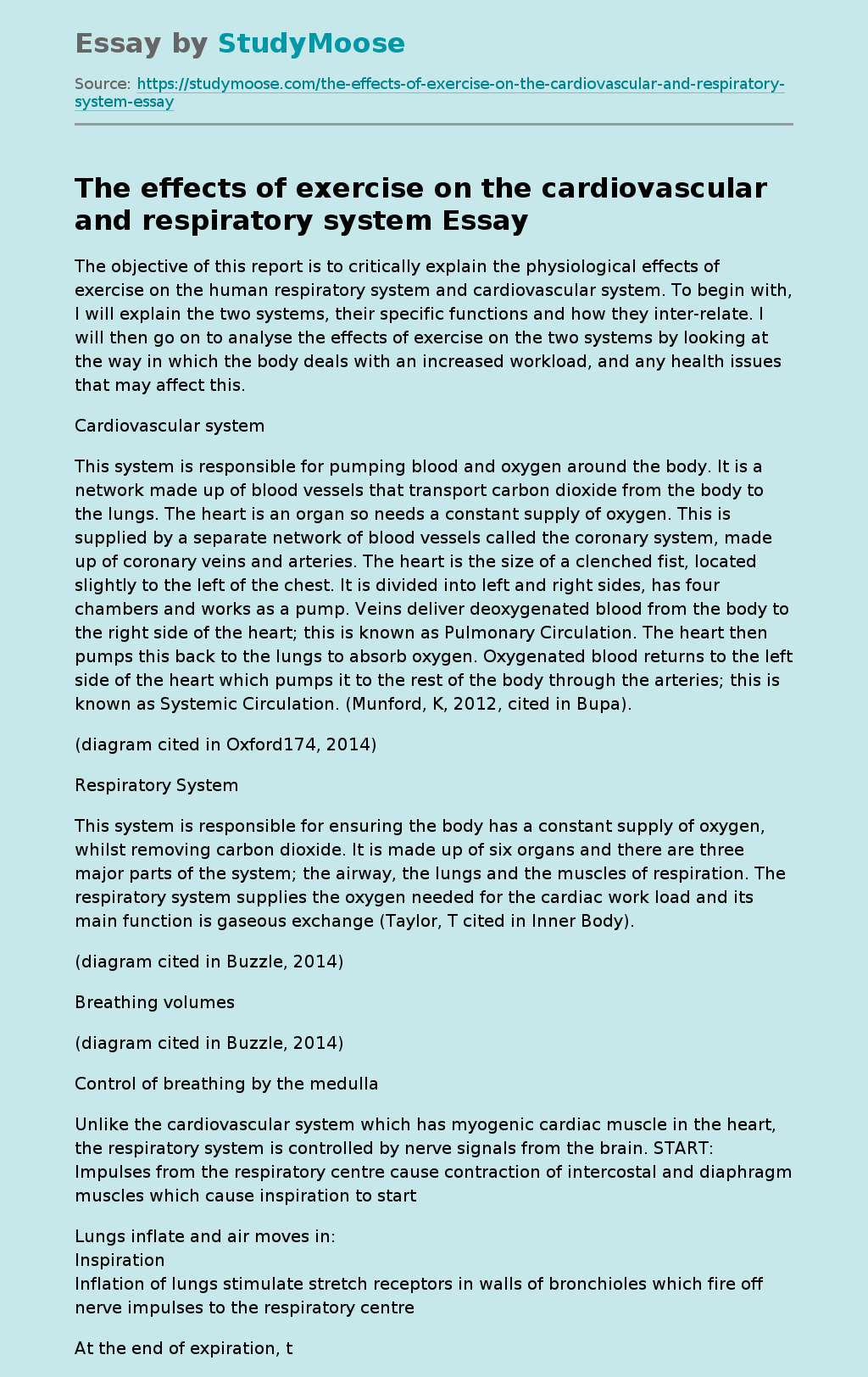