How the digestive, cardiovascular and respiratory system are interrelate?

The respiratory system is an important part to how our bodies function. Respiration has two meanings. According to Kenneth Miller, author of Biology, respiration is defined as the release of energy from the breakdown of molecules in food in the existence of oxygen. It is also the process by which oxygen and carbon dioxide are interchanged between cells, the blood, and the air present in lungs (956). Many different species of animals have a different way to respirate.

Don't use plagiarized sources. Get your custom essay on
“ How the digestive, cardiovascular and respiratory system are interrelate? ”
Get custom paper
NEW! smart matching with writer

In humans it is simply taking a breath to bring about the exchange of carbon dioxide and oxygen in the lungs.

The respiratory system has important parts to it that contribute to its function. The nose is one of the first parts that is involved in the process of respiration aside from the mouth. It allows you to breath in air that usually contains 21% oxygen and 0.04% carbon dioxide and directs it to your lungs. The pharynx, located before the windpipe.

“It serves as a passage way for both air and food.” (Miller 956). Above the trachea is the larynx which consists of two elastic folds of tissue, or our vocal cords. This contributes to our ability to speak which is very important. The next parts of this system are the bronchi. They lead into small bronchioles that are engulfed by a smooth muscle that keeps them working and regulates the size of the air passageways. Next are the alveoli which are millions of tiny air sacs grouped in small clusters. Beneath the chest cavity is a flat muscle called the diaphragm.

When you inhale, it gets bigger and when you exhale it relaxes. This movement increases the size of the chest cavity.

The process of how the respiratory system works is essential for respiration to occur. All parts of this system play a huge roll on how our bodies function when it comes to breathing. The first step in this process is inhaling through your nostrils or mouth. The nasal cavity leads to the pharynx which is the passageway that leads to your trachea. surrounding the trachea are stiff cartilage rings. According to Rick Hallman, author of The Living Environment: Biology, the rings of cartilage help the trachea maintain its tubelike shape keeping it open and spaced for easy airflow (55).

After the air we inhale passes through the trachea it goes through two large passageways, or bronchi which connect to each lung. The bronchi subdivide into smaller bronchi which then lead to even smaller passageways, or the bronchioles. Most bronchioles have a lining of mucus and tiny hairlike parts called cilia. Cilia helps keep the lungs clean. The bronchioles go on and on until they reach the alveoli. The alveoli is where the main part of this whole process takes place. A thin network of capillaries surround each alveolus allowing the exchange of gas to take place with the blood.

There are many diseases involved if the respiratory system is not taken care of. Smoking is the leading cause of many lung diseases and breathing problems. For, example Bronchitis is the inflammation and swelling of the bronchial tubes. “Even smoking a moderate number of cigarettes on a regular basis can produce bronchitis” (Miller 962). Common in most children is Asthma. This disease is contracted when he walls of the bronchi get smaller restricting the steady flow of air, resulting in the incomplete filling of air in the lungs. The common reason for children to have this disease is because someone around them is a usual smoker, making them second hand smokers. Another disease is pneumonia. This disease is from a bacterial or viral infection that causes excess and unneeded fluid to enter the alveoli.

Scientists have figured out the respiratory system and found how complicated but important the process is. The various parts of this system includes the pharynx, larynx, trachea, bronchi, and lungs. They all work together to make breathing possible for all mammals. Of course the system can be damaged in many ways. For example, if the cilia located in our bronchioles were to become paralyzed or damaged by smoking, they will not be able to keep our lungs clean. Smoking has taken many lives of those who have either died from Bronchitis, Emphysema and even lung cancer. It is important that no one starts smoking for the sake that they may become addicted from the chemical nicotine found in cigarettes.

The human body has to be controlled from advanced systems internally of which connect in order to function effectively. There are ten main systems within the body of which all perform various activities and all interrelate with at least one other system; the nervous system. The most complex of all body systems, the nervous system controls all functions within the body.

The cardiovascular system has a role of circulating blood around the body. The contents of blood being circulated include nutrients, gases and waste products. The main organs involved within this process are blood, arteries, veins, heart and the lungs.

The function of the digestive system is to absorb and adapt key nutrients which are required to maintain and regulate other systems in the body. Enzymes secreted within the digestive system have a role of breaking down food from proteins into amino acids, starch into glucose and fats into a mixture of fatty acids and glycerol.

Carbon dioxide diffuses back into the alveoli and then is exhaled out of the mouth through the respiratory system. It is evident that both systems are required in order to sufficiently exchange gas. If the human body was unable to perform gas exchange, cells within the body would die so this interrelation is important. The respiratory system interrelates with the digestive system to perform a defence mechanism. When a micro-organism has successfully entered the human body, goblet cells along the respiratory tract have the ability to produce a larger yield of mucous. Mucous is a defensive “sticky” liquid of which has the ability to collect micro-organisms that bind with the substance. Cilia within the trachea slide the mucous towards the entry of the oesophagus.

The substance is then delivered through the tube and into the strong hydrochloric acid present in the stomach. To aid with the respiratory system, the digestive system provides the diaphragm with key nutrients necessary to facilitate breathing. It is also noted that both the digestive system and respiratory system provide the key products to perform aerobic respiration.

How the digestive, cardiovascular and respiratory system are interrelate?. (2016, Mar 26). Retrieved from http://studymoose.com/how-the-digestive-cardiovascular-and-respiratory-system-are-interrelate-essay 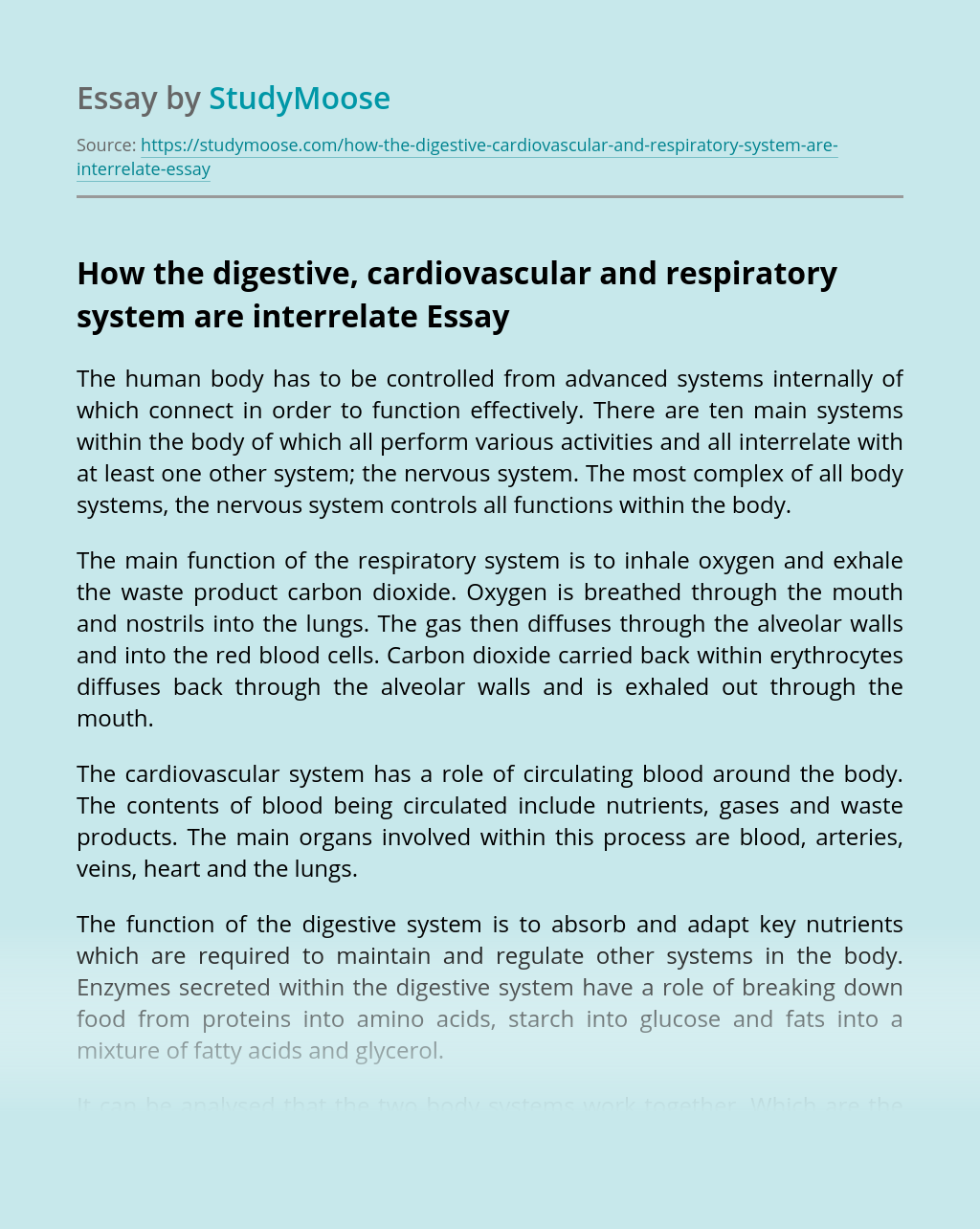