Effect of Exercise on Cardiac Output

1. During exercise: HR will increase

2: During exercise: SV will increase

3. During exercise: CO will increase

4. What instrument was used to measure cardiac volumes? MRI

5. Does the instrument that was used to measure cardiac volume use X-rays? Explain.

No. MRI uses a powerful magnet in conjunction with radio frequency waves to generate images of your internal organs and structures.

a. What was the average resting cardiac cycle length? 825

b. What was the average exercising cardiac cycle length?432

a. What was the average resting EDV? 139

b. What was the average exercising EDV? 139

c. The range of normal resting EDV is between 135 and 145 ml for these subjects. Did average EDV increase, decrease, or not change with exercise? No change

a. What was the average resting ESV? 70

b. What was the average exercising ESV? 34

c. The range of normal resting ESV is between 65 and 75 for these subjects. Did average ESV increase, decrease, or not change with exercise? decreased

a. What was the average resting HR? 73

b. What was the average exercising HR? 139

c. The range of normal resting HR is between 70 and 73 beats per minute for these subjects. Did average HR increase, decrease, or not change with exercise? increased

a. What was the average resting SV? 69

b. What was the average exercising SV?104

c. The range of normal resting SV is between 60 and 80 ml for these subjects. Did average SV increase, decrease, or not change with exercise? increased
6. Resting and exercising CO:

a. What was the average resting CO? 5

b. What was the average exercising CO? 15

c. The range of normal resting CO is between 4.2 L per minute and 5.84 L for these subjects. Did average CO increase, decrease, or not change with exercise? Increased

1. What caused the change in HR with exercise?
The cause for the increased heart rate was related to need for more oxygenated blood to supply the need of the muscles for activity. The increased muscle activity caused an increase in CO2 and other waste products that need to be removed and new brought in to replenish in order to strive for homeostasis.

2. Discuss the effect of venous return and heart rate on exercise EDV.

During exercise, the rhythmic pump of your muscles facilitates venous return by forcing blood through the one-way valves that lead to the heart. What’s more, increased lung activity creates a change in thoracic pressure that draws blood toward your heart. Regular exercise improves venous return by increasing total blood volume, increasing end diastolic volume, and increasing the size and contractile strength of the heart muscle. Exercise also increases the number of capillaries at the muscle where oxygen and CO2 are exchanged, reducing peripheral resistance

3. What caused the change in ESV volume with exercise?
A higher volume of blood being supplied out to the body and utilized at the peripheral capillary level.

4. Why did SV change with exercise?
Increased related to the raised pressure of the stressed heart to supply blood to the body.

5. Discuss the importance of the change in CO with exercise? Enhancing cardiac output allows you to maintain lower heart rates during physical activity. Acclimating to the stress placed on a body if performing the same level continuously for a period of time (conditioning). This will help by ultimately reducing your resting rate causing less stress on the cardiovascular system and the body operating more efficiently.

6. Restate your predictions that were correct, and give data from your experiment that support them. Restate your predictions that were not correct and correct them, giving supporting data from your experiment that supports your corrections. Heart rate did increase related to the demand for disposal of waste by-products from muscles and demand of delivery of oxygenated blood for replenishing resources. During exercise SV will increase related to the response of the increased pressure of the heart in order to supply blood to the body. During exercise CO will increase related to the amount of blood supply required to maintain homeostasis.

2. Assume that for one beat, the stroke volume of the left ventricle is greater than that of the right ventricle. Explain why in a normal heart this would be corrected on the next beat. It is a pressurized system that beats one then two moving the blood from one station to the next if not corrected the left ventricle would ultimately at some point become empty and supply no oxygenated blood could be sent out. Possibly cause a vapor lock.

3. Explain why elite athletes have a lower than normal heart rate, yet have a higher than normal ability to increase cardiac output.

Cardiac output adapts throughout a training program. The “American Council on Exercise’s Personal Trainer Manual” lists exercise adaptations as increased ventricle size, decreased exercise heart rate and increased stroke volume. Therefore, your heart can maintain a high cardiac output with less effort. Most improvement to cardiac output is contributed to increased stroke volume. Positive adaptations occur in as little as three months of aerobic training. Enhancing cardiac output allows you to maintain lower heart rates during physical activity. For example, at the start of a program you may have a heart rate of 150 beats per minute while running at a 6 mph pace. After three or more months of training increased cardiac output enables you to sustain the same running intensity at a lower heart rate such as 125 beats per minute

Effect of Exercise on Cardiac Output. (2016, Mar 24). Retrieved from https://studymoose.com/effect-of-exercise-on-cardiac-output-essay 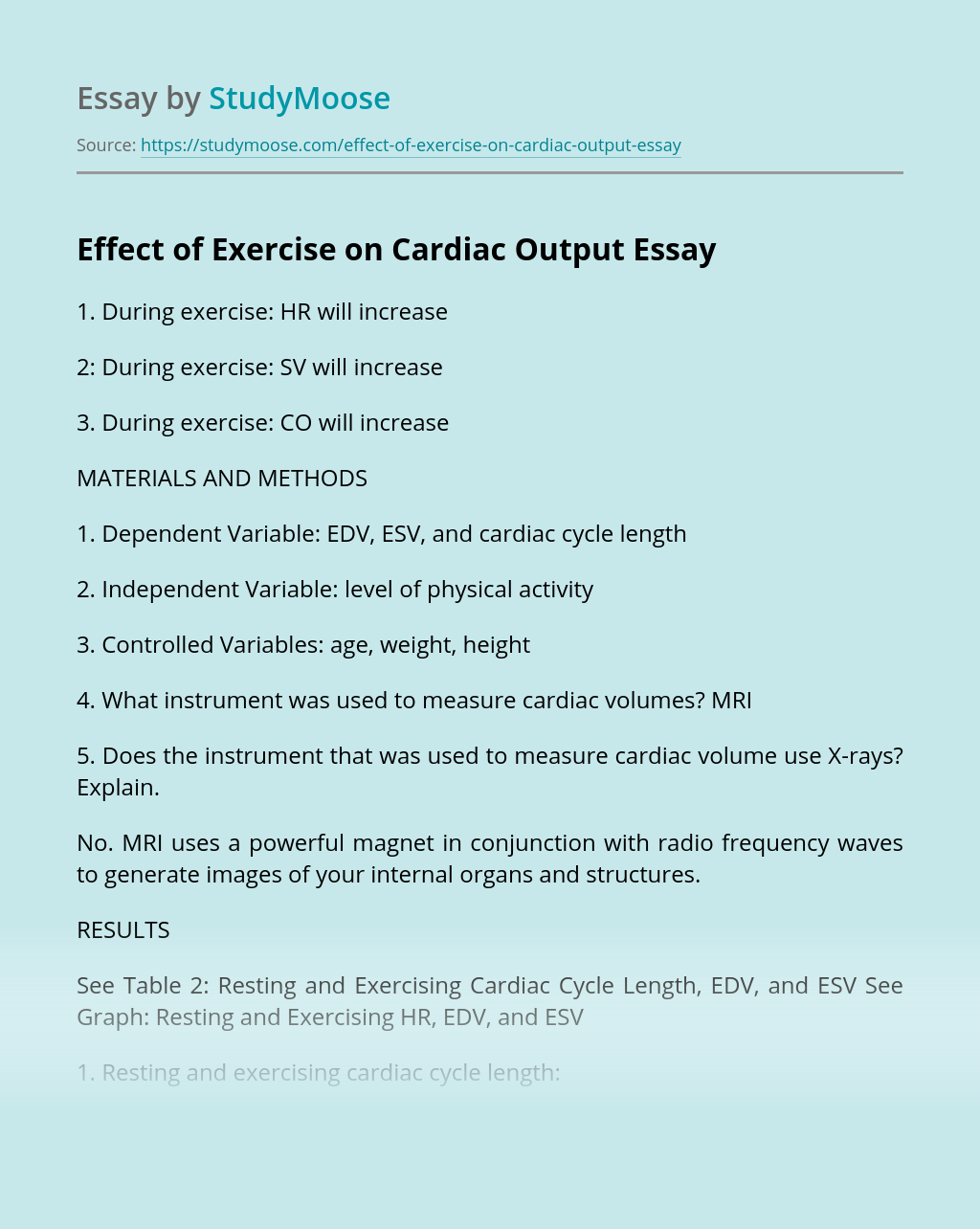