“An Occurrence At Owl Creek Bridge” By Ambrose Bierce

Naturalism is often perceived as a form of writing which is blunt because of the candor that writers used in approaching the subject. However, while naturalism is known to employ detailed realism in describing its subjects it necessarily follows that characterization becomes a critical process where the reader is given the benefit of making a conclusion as to how a particular character is characterized. In effect, naturalism merely generates the facts for the reader to base his/her conclusion on.

In this light, the main character in Ambrose Bierce short story, “An Occurrence at Owl Creek Bridge”, Peyton Furquhar is given flesh and blood using naturalist elements of description, association, and flash back.

Don't use plagiarized sources. Get your custom essay on
“ “An Occurrence At Owl Creek Bridge” By Ambrose Bierce ”
Get custom paper
NEW! smart matching with writer

Description is a device that could be perceived as naturalist because it is through this that the writer is able to give a matter-of-factly picture of the character and in the short story, such device works to initially present the superficial characteristics of the main character. For instance, in the line, “Peyton Farquhar was a well-to-do planter, of an old and highly respected Alabama family.

” (Bierce, 2010) no further suppositions can be made except for what is being stated; that the protagonist is well to do, is in agriculture, and has integrity in that he is a well respected member of a known family. Obviously, in these lines, the writer does not have any intention of creating other subjective interpretations; instead he simply states what is superficially apparent. In another line from the story, “her husband approached the dusty horseman and inquired eagerly for news from the front.

” (Bierce, 2010) still referring to the protagonist, the author again reveals another superficial personality that being the eagerness of the protagonist for news, in fact this particular characterization is stated in the same line to avoid further misjudgments. Association is also used in the story to indirectly characterize the character by revealing apparent unrelated events or situations. This is consistent with naturalism where the environment and social circumstances can work to influence a particular character or an event. In the lines, “Evidently this was no vulgar assassin.

The liberal military code makes provision for hanging many kinds of persons, and gentlemen are not excluded. ” (Bierce, 2010) succeeding a lengthy description of the physical attributes of the protagonist, the writer, by association, suggests that the protagonist was being executed unjustly. Further analysis of this line would reveal that another association comes to mind; that the character belongs to the middle or the upper class. So, even without the physical descriptions, one can easily associate the mitigating circumstances to the actual character of the protagonist.

Another such example is found in the lines, “To be hanged and drowned,” he thought? “that is not so bad; but I do not wish to be shot. No; I will not be shot; that is not fair. ” (Bierce, 2010) here, the author reveals a side to the character of the protagonist determined by his chosen method of death – being shot during this period was an undignified way of dying as it was indicative of the gravity of the fault of the one being executed. Shooting was also done while the victim had his back on the shooters which all the more makes it quite humiliating and degrading.

So, this particular line characterizes the protagonist, through external circumstances, as someone who has a reputation that he protects and would not want to be tarnished. Other than just association, reminiscing and flash back are also tools in naturalism that may be employed to characterize a character. Flash back is when the protagonist draws from past experiences or recalls certain social elements that are not in effect at the period the story is being told, and these elements can reveal much about the character and even affirm the actions of the character.

So, in the lines, “By diving I could evade the bullets and, swimming vigorously, reach the bank, take to the woods and get away home. My home, thank God, is as yet outside their lines; my wife and little ones are still beyond the invader’s farthest advance. ” (Bierce, 2010) the author paints the character to be someone who is deeply concerned of his family that even in his direst moments, as guards were shooting at him from the riverbank, he still had thoughts of his home intact, which he verily recalled consequently revealing this particular aspect of his personality.

Again, this same naturalistic device is used in the lines, “He must have traveled the entire night. As he pushes open the gate and passes up the wide white walk, he sees a flutter of female garments; his wife, looking fresh and cool and sweet, steps down from the veranda to meet him. ”; (Bierce, 2010) where a sexual nature is revealed in the scenes that the protagonist recalls. Here, other than just revealing that the character is a homely and family person, the stark description of the garments as well as the scent of the wife are consistent with a subliminal description which points to the sexual desires of the character.

In the story, “An Occurrence at Owl Creek Bridge” Bierce effectively gives his character ‘life’ notwithstanding his turning up dead in the end, by using certain elements of naturalist and realist literature. Here one sees that through superficial and candid description, association of environmental and social circumstances, as well as the recall or reminiscing of past circumstances, the personality, attitude, and character of the protagonist becomes more vivid and believable. References Bierce, A. (2010). An Occurrence at Owl Creek Bridge. Retrieved May 5, 2010, from http://fiction. eserver. org/short/occurrence_at_owl_creek. html

“An Occurrence At Owl Creek Bridge” By Ambrose Bierce. (2016, Oct 14). Retrieved from https://studymoose.com/an-occurrence-at-owl-creek-bridge-by-ambrose-bierce-essay 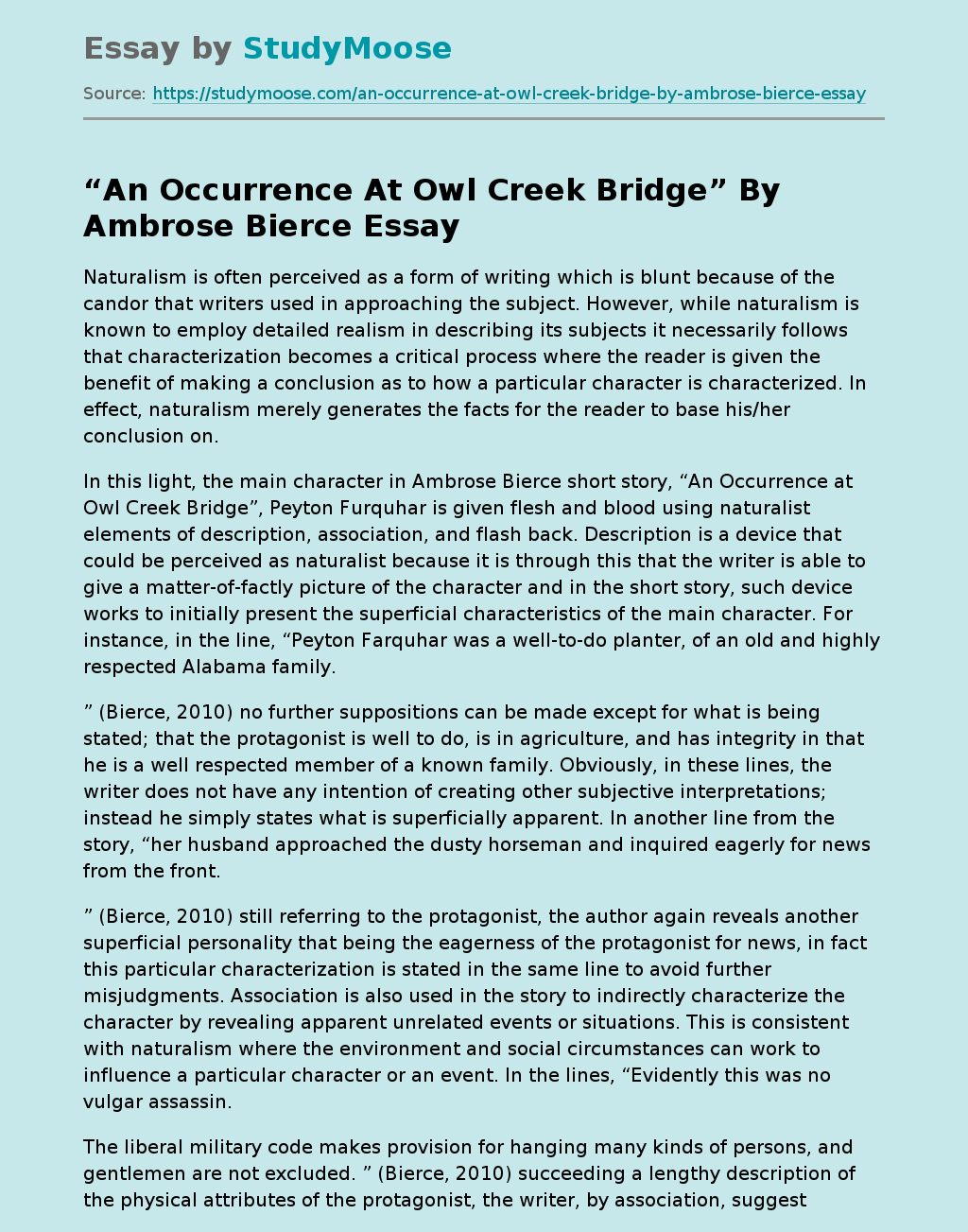