The classic work Democracy In America by Alexis de Tocqueville has been the reason for scholarly pursuit as well as strife within that same community. Through a brief examination of this text, several of Tocqueville’s arguments helped to define many of the constructs that made America what it was as well as those that have led to what it has become today. Of the many themes and ideas presented by Tocqueville, his thoughts on individualism struck the loudest chord with me.

Don't use plagiarized sources. Get your custom essay on
“ An Exploration of Individualism as Described by Alexis de Tocqueville in Democracy in America ”
Get custom paper
NEW! smart matching with writer

Tocqueville describes America as a society of joiners because of the fact that it is a country almost entirely composed of immigrants. This, in addition to the pursuit and promise of “equality of conditions” that Americas touted as an unofficial theme, brought citizens from many classes together in closer proximity and relation. Although this sounds like a good thing, Tocqueville argued that with this blending of social classes and increased opportunity people would isolate themselves, “bond of human affections is extended and loosened” (p.

483). As people gained wealth and left behind the daily struggle to survive many sought out education and as a result of this enlightenment developed the “habit of always considering themselves in isolation” (p. 484).

This individualism is likened to selfishness by Tocqueville but he is careful to point out that he does not believe that it is the same thing. He does this by describing selfishness as “a passionate and exaggerated love of self that causes man to relate everything to himself alone,” and individualism as “a reflective and peaceable sentiment that disposes each citizen to .

. . withdraw to one side with his family and friends” (p. 482). The way in which individualism caused people to separate from society with only their friends and family caused a problem, in that, by doing so a public conscience can not be established. Individualism leads to a slowdown of democratic culture and the results in such “fabric of time is torn at every moment and the trace of generations is effaced” (p. 483). If people are not careful equality of conditions can, over time, make “each man forget his ancestors . . . and threatens finally to confine him wholly in the solitude of his own heart” (p. 484).

Tocqueville goes on to say, “all the passions that equality gives birth to or favors, there is one . . . that it sets in the hearts of all men at the same time: the love of well-being” (p. 422). Unfortunately this kind of passion usually manifests itself as an uncontrollable desire to acquire wealth and material things. “The taste for material enjoyments, must be considered the first source of this secret restiveness revealed in the actions of Americans and of the inconstancy of which they give daily examples” (p. 512). Although this kind of materialistic pursuit of wealth may appear to be true freedom for some, Tocqueville argues that it is in fact the manifestation of the middle class American’s overwhelming fear of death. “He who has confined his heart solely to the search for the goods of this world,” Tocqueville observes, “is always in a hurry. . . . In addition to the goods that he possesses, at each instant he imagines a thousand others that death will prevent him from enjoying if he does not hasten” (p. 512). Equality of conditions awakens the inner feeling of hope and happiness in all people, but unchecked theses feelings can lead to an all consuming obsession with one’s own mortality that ignites and hinders passion which leads to “unceasing trepidation” compelling a person to “change his designs and his place at every moment” (p. 512).

Tocqueville then goes on to describe an America where the individualism described above leads to a desire for materialistic wealth that “disposes men to believe that all is nothing but matter” (p. 519). He talks about how this can lead to an American society that emphasizes development of “the goods of the body” (p. 521) and disregards the development of the mind and care of the soul. Tocqueville qualifies these statements by making the claim that there is no other country that is “less occupied with philosophy than the United States” (p. 403). It is both profound and interesting that Tocqueville saw this happening in his time as it has certainly continued and grown since then. The epidemic of people, like the Kardashians, becoming celebrities for doing nothing perfectly illustrates what he describes as “minds so disposed, every new method that leads to wealth by a shorter path . . . every discovery that facilitates pleasures and augments them seems to be the most magnificent effort of human intelligence” (p. 436).

These observations lead to another important point of Tocqueville’s, the lack of understanding and allowance for the “profound, slow work” (p. 435) of ones own mind. During his travels Tocqueville found few people that would take the time to develop a true passion and desire for introspection and contemplation. It is because of this that America eventually gave birth to philosophy and the practice of pragmatism only serves to illustrate what Tocqueville described as America’s “unparalleled energy toward application” (p. 437). This “unparalleled energy” is what led to the practice of planned obsolescence and why it is an ever increasing part of day to day life in America. With the rapid advancement of technology it is not unheard of for a computer or other device to be obsolete within weeks. Although the device was different, Tocqueville observed this phenomenon when speaking with a sailor, “art of navigation makes such rapid progress daily that the most beautiful ship would soon become almost useless if its existence were prolonged beyond a few years” (p. 428). Rapid advancement, in addition to the population’s desire for the “latest and greatest” forced craftsman “to make many imperfect things very rapidly” (p. 441) just to satisfy demand. Even language in America changed and began to mirror this “industrial taste”(p. 435)

With the ever increasing emphasis that was placed on progress and application it is not surprising that the purity of the arts were affected as well. Tocqueville described the way in which art and artists in America could not escape the desire to be relevant when he talked about how the work turned from depicting “sentiments and ideas” to “emotions and sensations” (p. 442). The embodiment of this, according to Tocqueville, is best illustrated by America’s obsession with theatre, which he regarded as “most natural to democratic peoples” (p. 467). He goes on to say “Most of those who attend the acting on the stage do not seek pleasures of the mind, but lively emotions of the heart. They do not expect to find a work of literature but a spectacle” (p. 467 / 468). This is the direct consequence to and result of the “practical, contested, and monotonous” (p. 448) lives that were created due to the emphasis that was placed on the materialistic growth we discussed earlier. Through television and film, this kind of spectacle, which Tocqueville criticized and ascribed to democratic societies, has reached a level of cultural relevance and depravity that he could have never predicted.

Tocqueville believed that a strong and flourishing democratic society could cultivate, in the spirit of its people, a consciousness of the delicate balance between the finite amount of material goods this world has to offer and the overwhelming affect of an “exalted and almost fierce spiritualism” (p. 510). Throughout the examination of Tocqueville’s words it became clear that biggest threat to America is not foreign enemies or the government, the greatest threat to America are it’s citizens. Only through understanding and the abandonment of the selfish practice of individualism will America survive.

An Exploration of Individualism as Described by Alexis de Tocqueville in Democracy in America. (2016, Oct 11). Retrieved from https://studymoose.com/an-exploration-of-individualism-as-described-by-alexis-de-tocqueville-in-democracy-in-america-essay 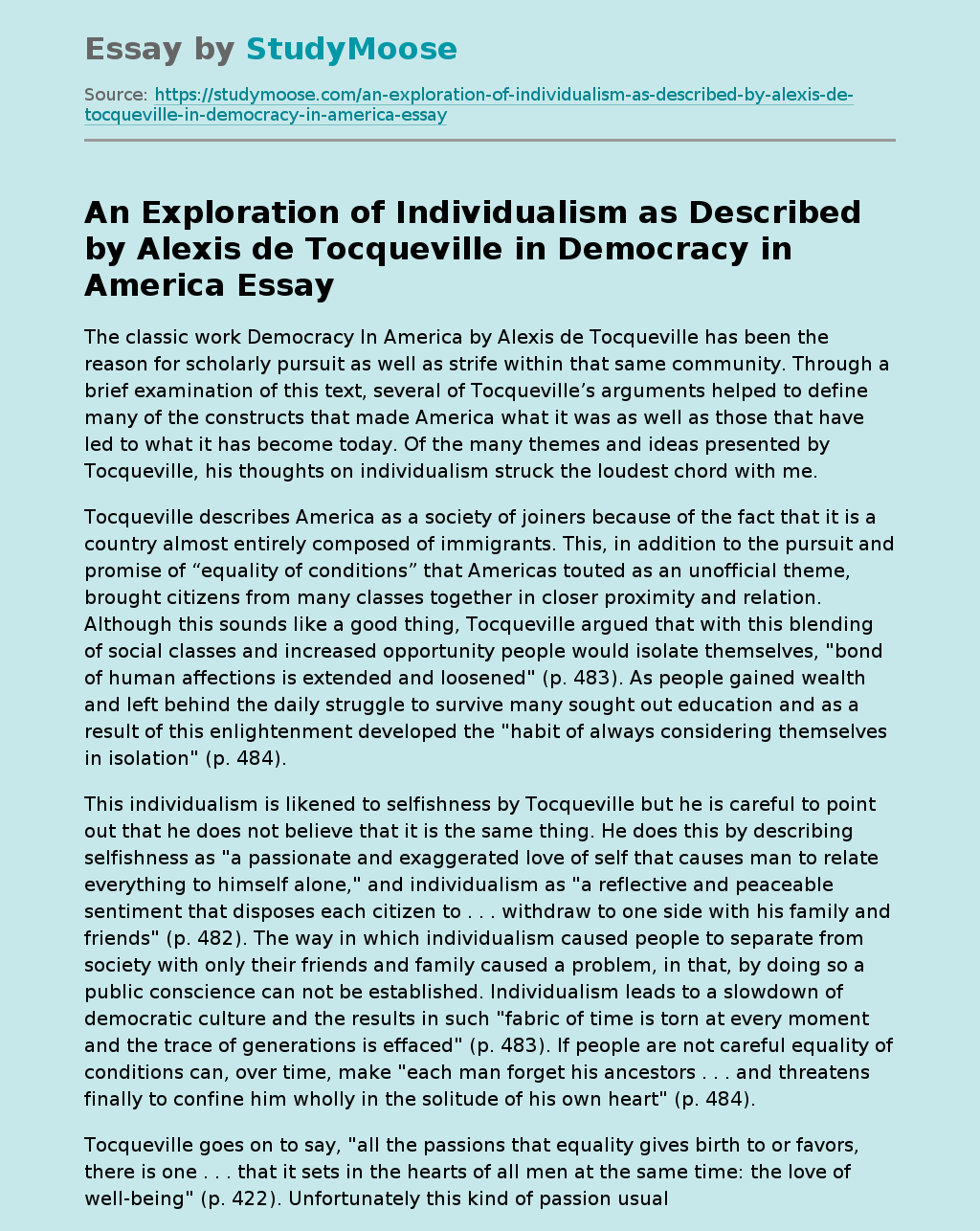