Individualism as an American Cultural Value

American culture is often associated with some images related to general stereotypes such as assertiveness, optimism, boldness, a sense of enterprise, and a solid handshake. However, these characteristics are only general observations about the American society. Given this, the mentioned characteristics may be present to only some Americans and cannot be attributed to everyone. But there is one value that nearly every American possesses and that is individualism. In defining the American culture, individualism is the immediate concept that comes to mind.

Don't use plagiarized sources. Get your custom essay on
“ Individualism as an American Cultural Value ”
Get custom paper
NEW! smart matching with writer

Because of this, “outsiders” like immigrants, foreigners or people from different backgrounds will have a difficult time to become accustomed with this kind of culture. In fact, in the early period, outsiders found it hard to adapt to the American value of individualism because of the differences in cultural values. The idea of a family often poses as the source for confusion or misunderstanding between cultures. In the US, bringing happiness to every family member is the main purpose of having a family.

This can be carried out by giving each family member the right to express themselves and pursue their dreams and passions in life.

However for other cultures, the emphasis on the achievement of an individual’s happiness without the help of the others may be perceived as rude or inappropriate. It could be a sign of disrespect or lack of love. But for many Americans, it is simply just an act of encouragement for a person to reach his or her utmost potential. For instance, a typical American would usually start to live independently after highs cool by going to college and living in campus dormitories.

Also, Sponsol had a similar experience when he attended a summer camp for the East-West Center participants.

One of the supervisors brought his wife and kids. The ten month old son of the supervisor acquired the most attention because of his cuteness so everyone wanted to play. During this interaction, the kid fell down and everyone tried to help him get up. But the parents became and asked the students to leave the kid alone who eventually got up on his own and stopped crying ( Sponsol 423). Moreover, privacy is definitely another aspect that an “outsider” would find unusual in the American culture. Majority of the American population value their privacy.

It has been observed that most Americans just say hello and seldom pursue a conversation with other people. For “outsiders,” this can be a sign of being impolite particularly for those who grew in a setting wherein asking private questions are accepted. Because of this, many find it hard to be friends with Americans. Sponsol explained that in the book, Americans do not like to be asked in with private questions or pried on their personal affairs. For instance, asking questions like, How long have you been divorced? Or Are you going to marry a Thai again or American?

Or How much do you earn? or How long have you been married? , can be recognized as an invasion of one’s privacy (421). A lot of people could experience having cultural shock when they visit the US for the very first time. As a result, it would be difficult for them to get used to the American culture. There are many reasons why this happens but cultural background plays a major role in drawing the line between the Americans and “outsiders. ” Some may have a privileged life in their home lands but when they migrated to the US, they had to work in order to sustain their daily living.

Furthermore, in the US culture, an individual has to be independent and hardworking to earn money in order to pay for the bills and other necessities such as food, home and education. In other cultures, some individuals do not have to work in order to survive because their parents are the ones taking care of their finances. It is very hard for an “outsider” to adapt and imbibe the American Culture. In the experience of Hanan Al-Shaykh, a Lebanese, she was filled with shock when she visited her sister in the US. Their family was accustomed to the good life in Lebanon but in the US, her sister lived a minimum wage earned.

She felt pitiful for the living condition of her sister in the Land of Milk and Honey. Her sister even found it hard to get a job in the US even though she has a good educational background (Hanan 287). As a foreigner, I also experienced some difficult times in getting immersed and accustomed with American society and culture. In Saudi Arabia, my life was easier. In my native land, dependence to others is a common practice. For instance, my family employed helpers to take care of all our needs at home. Their duties mainly evolved on domestic chores such as cleaning clothes, cooking food and many others.

Because of this, easy and carefree lifestyle, I had trouble adapting to the American culture when I moved there. I had to learn to look after myself wherein all the duties of our helpers back home, I had to them on my own in the US. Finally, because of the cultural values of the Americans, an “outsider” will find it hard or at least will need a longer time to adapt to theses values. Besides the assertiveness, optimism, boldness, a sense of enterprise, and a solid handshake, individualism will always be a crucial value of the Americans that will aid in developing and achieving their dreams and passion.

Individualism as an American Cultural Value. (2016, Sep 25). Retrieved from https://studymoose.com/individualism-as-an-american-cultural-value-essay 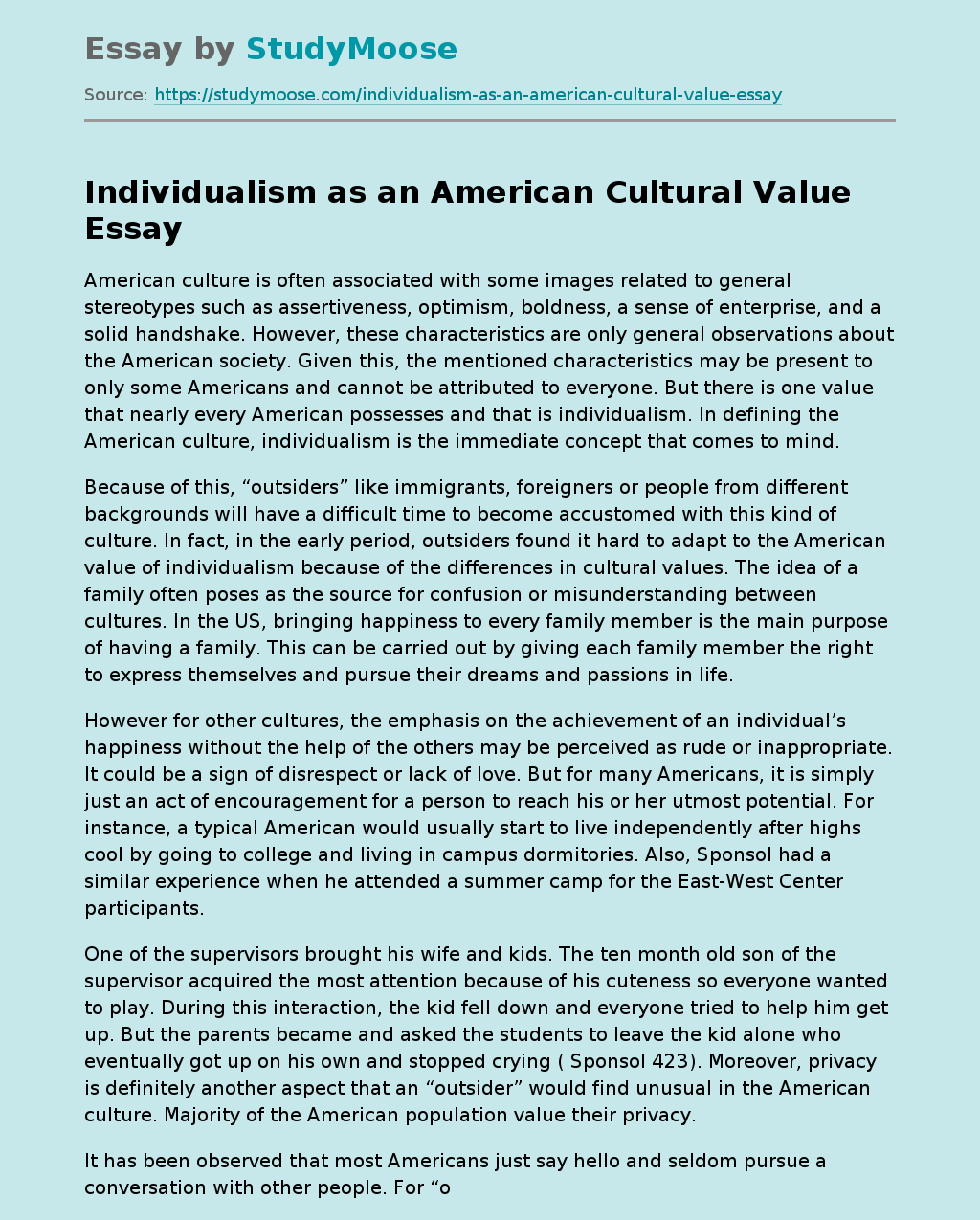