An Analytic Review of the Marx-Engels Reader by Robert C. Tucker

I will start my critique of this book by citing an excerpt from the Manifesto of the Communist Party proclaiming that the societies that have passed and continually exist are an absolute exposition of the contradiction of social groups based on the economic conditions. As Marx and Engels (1848) put it, “the history of all hitherto existing society is the history of class struggles.”

Freeman and slave, patrician and plebeian, lord and serf, guild-master and journeyman, in a word, oppressor and oppressed, stood in constant opposition to one another, carried on an uninterrupted, now hidden, now open fight, a fight that each time ended, either in a revolutionary reconstitution of society at large, or in the common ruin of the contending classes.

Don't use plagiarized sources.
Get Your Custom Essay on An Analytic Review of the Marx-Engels Reader by Robert C. Tucker Just from $13,9/Page

As it has been witnessed for more than one hundred and fifty years, Marxist philosophy caused much of the world’s tumultuous events. Indeed, dialectics brought dictators down from their thrones, liberated oppressed people, united peasants, workers and the toiling masses towards a revolutionary change, and proved that at specific points in history, armed confrontations are inevitable because the antagonism between the oppressor and the oppressed is a violent contradiction.

It is quite enlightening to know that Marxist philosophy can be claimed as the only philosophy that has deeply rooted among the masses, one that stirred their hearts and made the meekest of them grasp historical materialism and dialectical materialism. The answer, I think, is that of all the philosophies that have tried to interpret what the world is; only Marxism meddled with how to change the present conditions. It even turned peasants into generals, workers into party leaders and quite amusing that after the second world war, one third of humanity lives in a Marxist society.

While the Manifesto of the Communist Party on pages 469-500 provided us with the historical emergence of the bourgeoisie and proletarian class and their certain collision, the Economic and Philosophical Manuscripts of 1844 gave us a vivid understanding of what was the cause of the contradiction between social classes, the hostility within the mode of production – that is the accumulation of private property. It is quite interesting for me to know what “labor” has caused and therefore, what I, as a man possessing an ability to put forth “labor”, am capable of doing. It also came to my realization though, that for centuries working men are bound by the shackles of wage labor.

On his Theses on Feuerbach, from pages 143 to 145, Karl Marx said something about men which I think is agreeable. He said that men are neither products nor they can be changed into what they are by the “circumstances or upbringing” but it is human activity that creates the circumstances where human conditions persist. So it can be derived that men are not governed by destiny of pre-supposed existence of metaphysical proportions, rather, the world we have right now is a world men has created. It makes me realize then that wars, famines, poverty, and even global warming are the circumstances that human activity has created and the persisting conditions humanity has to face.

Though Karl Marx or Friedrich Engels did not live to see Russia become the first socialist country in 1917, followed by other East European, South American, African and Asian states, the world has truly had philosophers that did not only try to interpret the world but went directly to the point of changing it. True that they may have been grave errors committed by most of the socialist regimes but Marxist writings have changed much of the world we know today. From my own analysis, Marx and Engels taught men to predict the future based on the preponderance of the scientific mind, based what we actually see and feel.

An Analytic Review of the Marx-Engels Reader by Robert C. Tucker. (2017, Mar 03). Retrieved from https://studymoose.com/an-analytic-review-of-the-marx-engels-reader-by-robert-c-tucker-essay 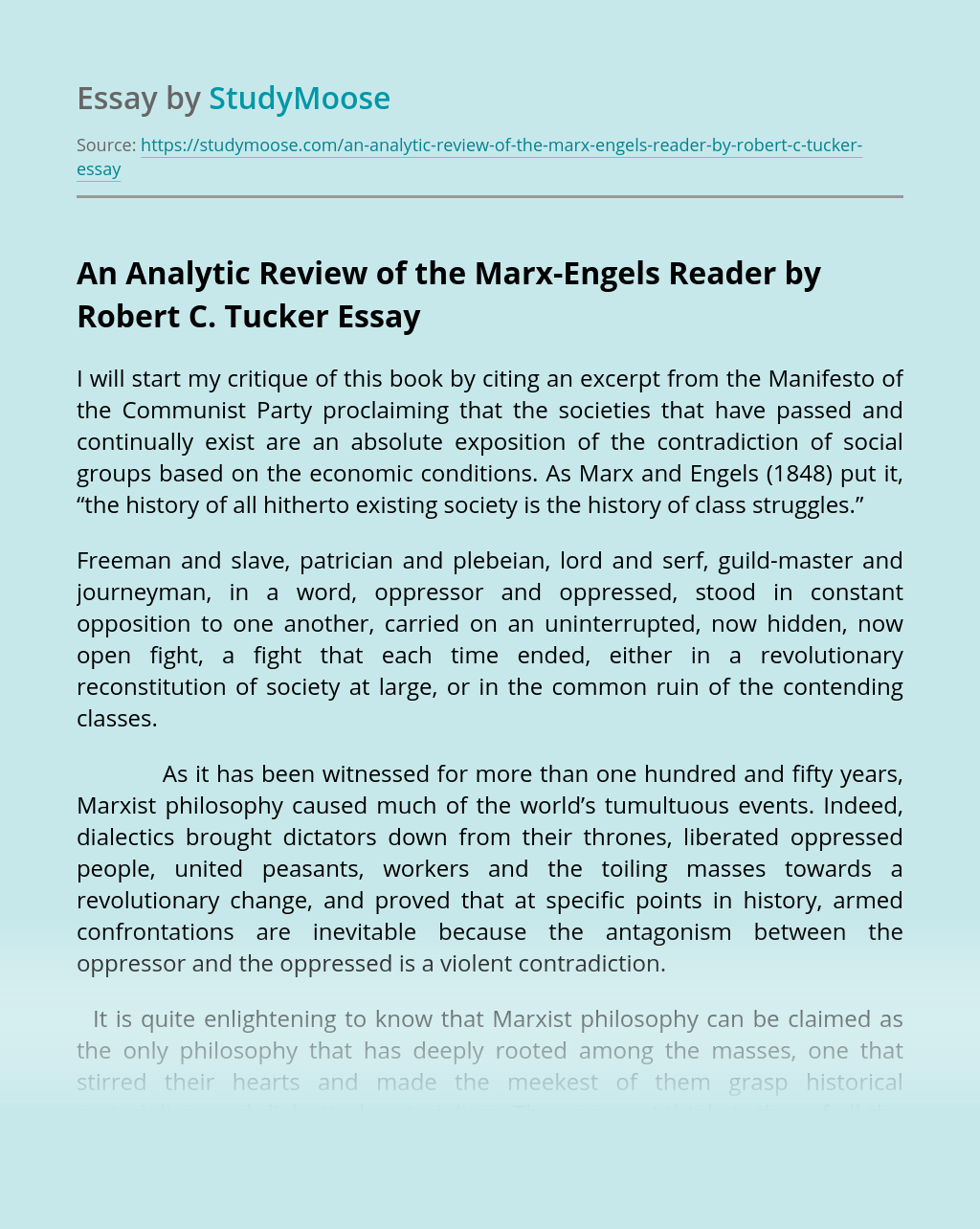 Marxist Theory on Crime and Punishment

Marxist Theory and Crime and Punishment Throughout human history many thinkers have actually increased with what they believed to be the best type of federal government for society as a whole. Karl Marx might be the most influential theorist in Russian history. According to The Free Dictionary, Marxism is the idea that “class battle plays...

Communism in China from 1925 to 1950 was a very interesting period in China, especially in terms of relationship between the Chinese Communist Party and Chinese peasants. Communism in China survived through the Japanese invasion and control of China during the Second World War. Based on evidence provided in the documents, the Chinese Communists and...

Stanislaw Lem (Polish pronunciation: [sta??iswaf ?l?m] ( listen); 12 September 1921 – 27 March 2006) was a Polish writer of science fiction, philosophy and satire. His books have been translated into 41 languages and have sold over 27 million copies.[2] He is known as the author of the 1961 novel Solaris, which has been made...

View sample
The Dangers of Totalitarianism

In the novel 1984, George Orwell creates a perfect totalitarian government warning the West countries (such as Spain and Russia) what their society may become in thirty five years. This book was written in 1949, predicting what may happen in the near future if totalitarianism was not rebelled against. Totalitarianism is a form of government...