An Analysis of “The Lottery” by Shirley Jackson

I will be analyzing the point of view and conflicts of Tessie Hutchinson and Bill Hutchinson from “The Lottery” by Shirley Jackson. In the story, a drawing takes place on the 27th of June every year and the townsfolk gather in the middle of town around ten in the morning. Tessie is late and after a quick hello to one of her friends, she joins her husband Bill and the drawing begins. Every head of the household goes up to draw a piece of paper from the lottery black box and reveals the results when everyone has picked.

Don't use plagiarized sources. Get your custom essay on
“ An Analysis of “The Lottery” by Shirley Jackson ”
Get custom paper
NEW! smart matching with writer

When it was discovered that Tessie’s husband, Bill, pulls the winning piece of paper, Tessie protests the results. The drawing continues with every member of the winning family going up to pick a piece of paper and Tessie is revealed to be the winner but continues to protest the results. The whole town proceeds to stone her. In this analysis, I will be comparing the different perspectives and conflicts of a society where the government and laws are not called into question and tradition goes unchecked.

At the beginning of the story, Tessie is running late to the gathering, joins the back of the crowd and quickly chats with her friend, Mrs. Delacroix, about how absent-minded she is of the events of the day, “Clean forgot what day it was.’ she said to Mrs. Delacroix, who stood next to her, and they both laughed softly” (Jackson 2). This shows the light-hearted nature and attitude of the day’s festivities.

She quickly joins her husband at the front of the crowd, jokes with members of the community along the way about not “leave m’dishes in the sink, now, would you” and the drawing begins (Jackson 2). Tessie’s joking attitude stopped when it was revealed that Bill was holding the winning ticket to which she starts to protest the results, insisting that “You didn’t give him time enough to take any paper he wanted” (Jackson 5). She demands a recount to no avail. Her demeanor changed only because the results of the lottery are impacting her family.

Bill, on the other hand, is shown to be a reputable member of the community. He shows up to the gathering with the other men and discusses the upcoming planting and weather. When he reveals the winning lottery ticket and Tessie begins to protest, he tells her to “Shut up, Tessie” (Jackson 5). He is the head of the Hutchinson family but conforms and obeys the leaders and laws governed by the town without question. He knew what continuing the lottery would do to his family but “with one quick glance around at his wife and children, nodded” for the next phase to begin (Jackson 6). He is accepting of the results and the tradition and without question even knowing that the results will end with him stoning one of his children or his wife.

The conflict for the Hutchinson family is centered around the winning ticket. While the rest of the town says to “be a good sport… all of us took the same chance”, both Tessie and Bill have different reactions (Jackson 5). The next phase starts and the Hutchinson family goes up one at a time to draw for the winning ticket and the children and Bill reveal blank pieces of paper. Bill “forced the slip of paper out of (Tessie’s) hand” because she knew that she was about to die (Jackson 7). Tessie continued to protest that “it isn’t fair, it isn’t right” and the townsfolk start throwing stones at her including her own family (Jackson 7).

In this story, Bill is showing that he trusts not only the officials but also the long-standing tradition while Tessie only trusted until society and the system turned against her and she is singled out and ignored by her neighbors and the officials in charge of governing the town. Shirley Jackson shows the reader what happens in a society when the government and the laws are not called into question by its citizens. She can convey the harsh reality of both sides of the spectrum; being part of the mob and being the outsider who is not willing to conform.

An Analysis of “The Lottery” by Shirley Jackson. (2021, Aug 03). Retrieved from http://studymoose.com/an-analysis-of-the-lottery-by-shirley-jackson-essay 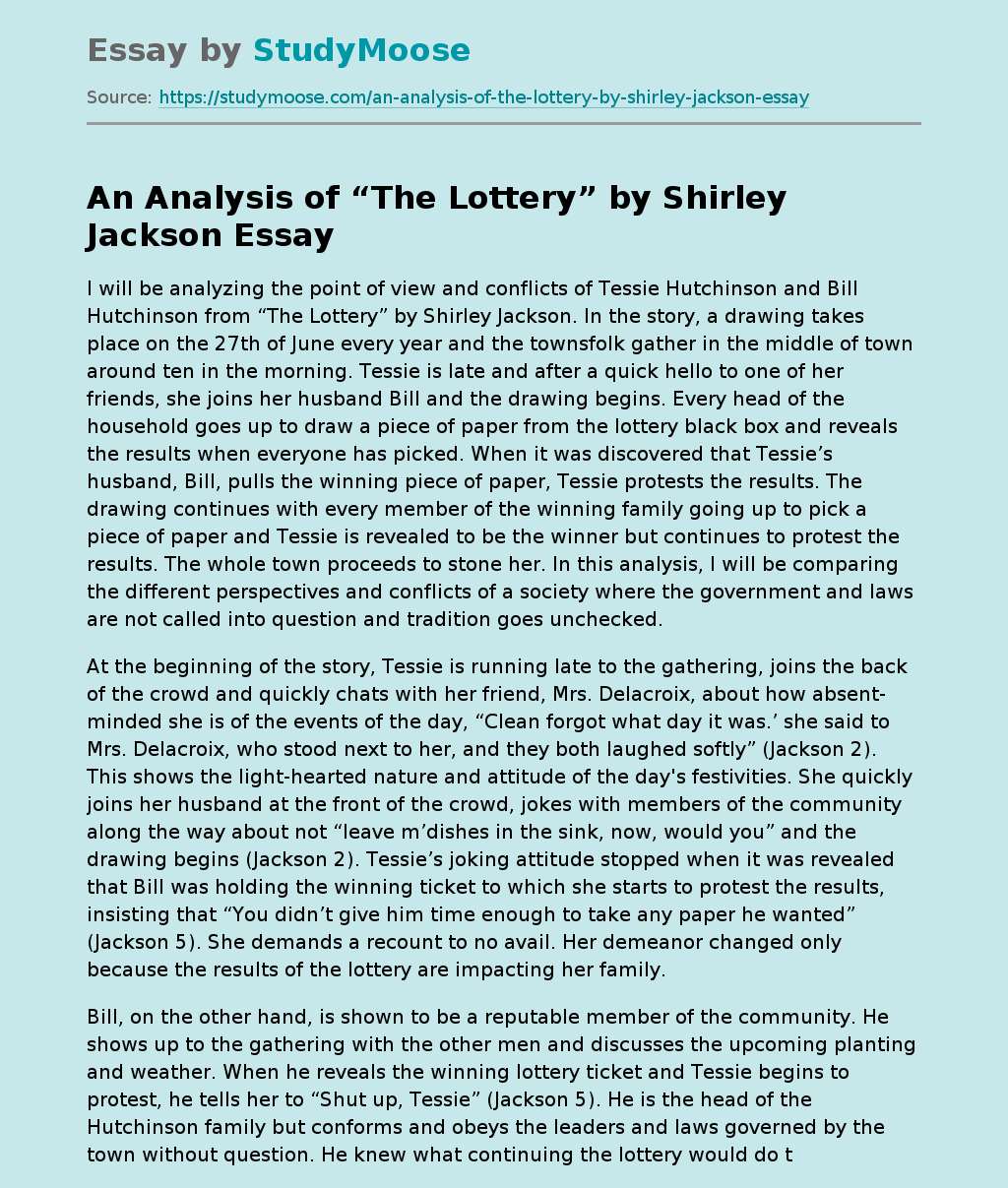